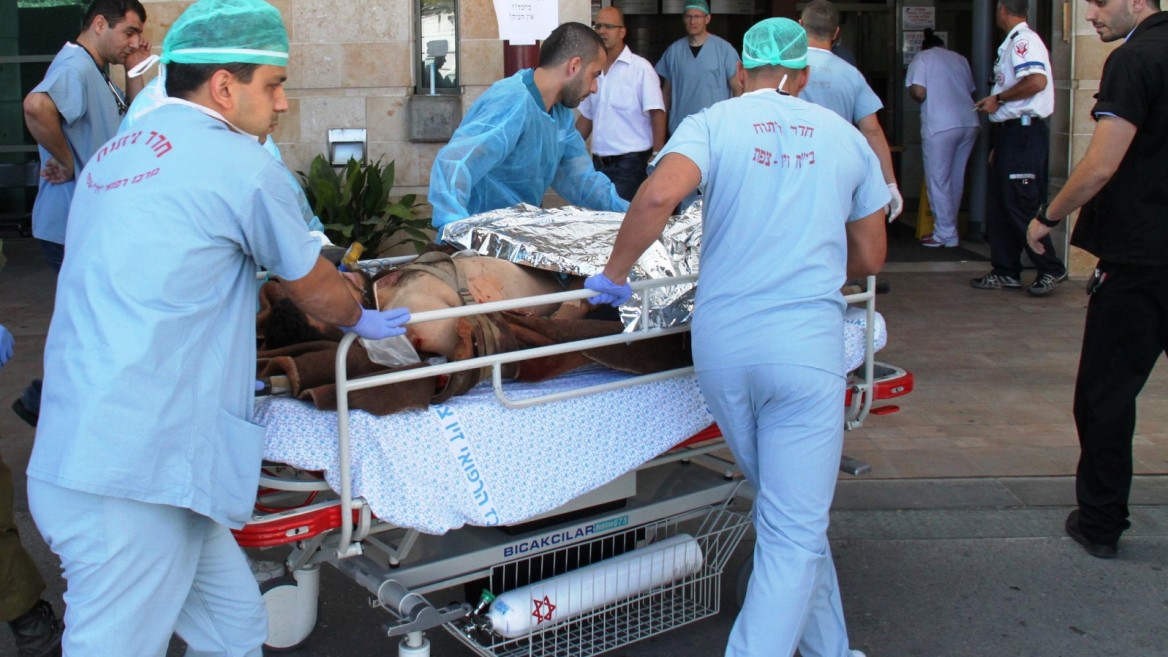 Six-year-old “B” arrived at the Ruth Rappaport Children’s Hospital in Rambam Health Care Campus in early February 2016 with injuries sustained in her country’s civil war. She was then found to be suffering from a hematological disease and stayed for treatment. On August 21, her new Israeli friends – doctors, nurses, medical clowns and volunteers — held a farewell party and presented her with many gifts.

“I would lie if I said that I expected the kind of humanity I discovered here,” B’s mother said at the party. “I am grateful for your care and sensitivity; may God protect you. And we will always remember what you did for us.”

B is just one of the Rambam Health Care Campus’s many Syrian patients. The medical center in Haifa has treated 140 Syrian men, women and children over the past three years.

Although Syria and Israel are enemy states in the political arena, it was obvious to the Israeli doctors that this little girl would be treated like any other patient and would only be discharged when she was healthy enough.

The Syrian civil war erupted in March 2011. Shortly afterward, the Israel Defense Forces (IDF) set up a field hospital on the border to treat victims.

The field hospital project was hush-hush at first. But as the number of Syrians willing to trust the so-called enemy (Israel) grew, the humanitarian crisis brought Israeli medical teams to the headlines.

In February 2013, the IDF began granting special permission of entry to Israel for the critically injured. “Our policy is to help in humanitarian cases, and to that end we are operating a field hospital along the Syrian border,” then Defense Minister Moshe Ya’alon told the Knesset’s Foreign Affairs and Defense Committee. “In cases where there are badly wounded, we transfer them to Israeli hospitals.”

No one predicted that the influx of Syrian patients would continue so long, but even today Israeli hospitals are treating any wounded Syrians who reach its border.

Since February 2013, four medical facilities in northern Israel – Rambam, Ziv Medical Center in Safed, Medical Center of the Galilee in Nahariya, and Poriah Hospital near Tiberias — have treated more than 1,200 Syrians wounded in their civil war. 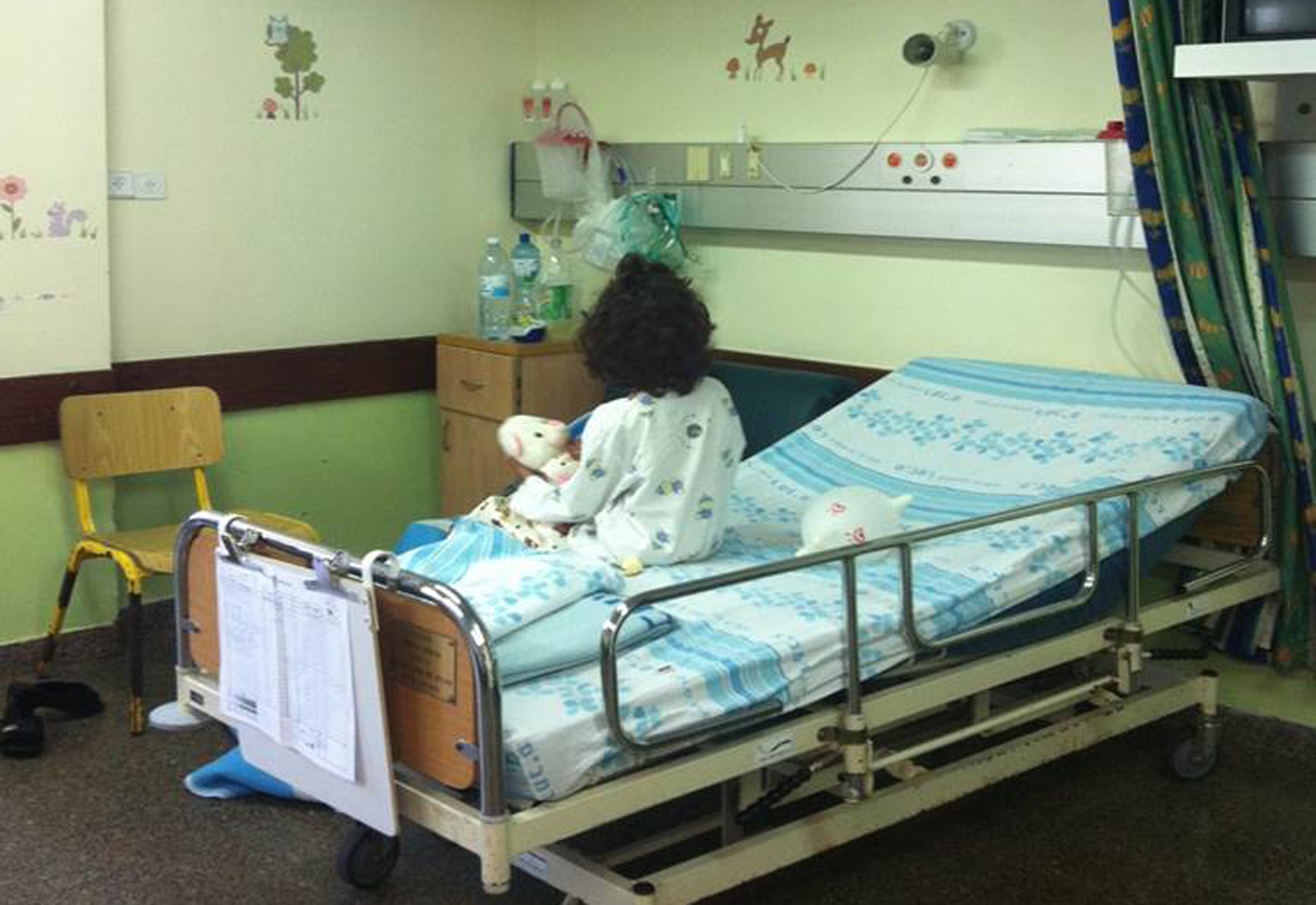 Since the first unexpected encounter with Syrian casualties in February 2013, Ziv has treated over 650 Syrians (as of August 2016) of whom 17 percent were children, many in critical condition, suffering from severe trauma inflicted by explosions, shrapnel and bullet wounds, burns and crush injuries. Most of the patients require numerous, complex operations.

“It’s our duty as a regional hospital, where we are located along the Lebanese border on one side and the Syrian border on the other side,” Dr. Amram Hadary  of Ziv Medical Center told ISRAEL21c. “We cannot ignore that the Syrian conflict is happening behind our door. We cannot close our eyes, ears and hearts to what is happening there. It’s a catastrophe.”

Each new admission is a heart-rending case.

There was the 12-year-old Syrian boy who arrived by donkey from Damascus in serious condition to an IDF border post and was transferred to Ziv with injuries to his arms, leg and eyes from a mortar shell that had exploded near his home. 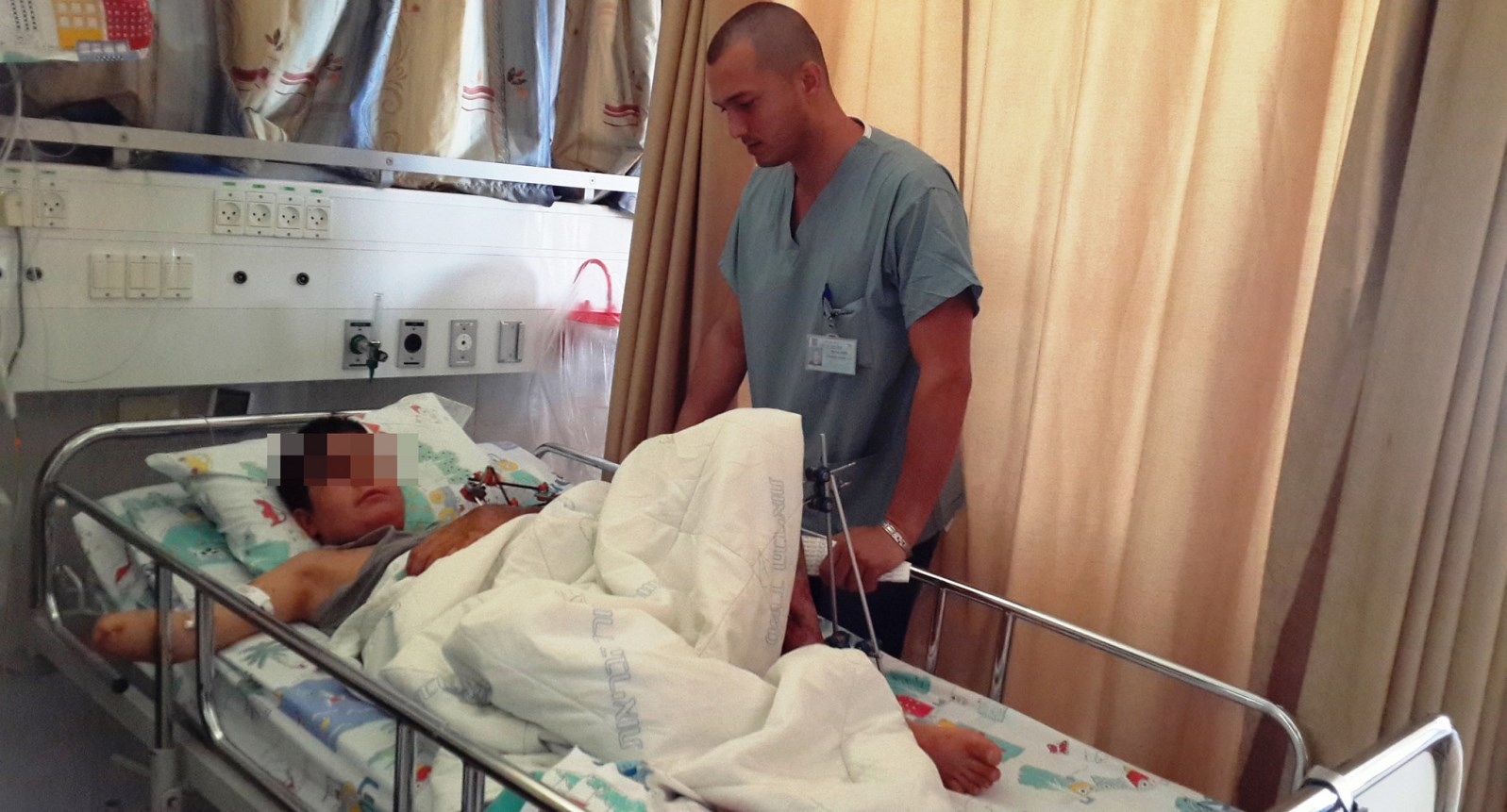 A 12-year-old Syrian boy was treated at Ziv Medical Center for serious wounds to his arms, leg and eyes. Photo: courtesy

There was the critically injured 15-year-old Syrian girl who came to Israel for more than a month of surgeries and rehabilitation.

In June 2013, a handwritten note addressed to Israeli physicians was attached to a Syrian patient’s clothes, explaining prior medical care and requesting lifesaving treatment.

“This marked a turning point,” then Ziv Medical Center director Dr. Oscar Embon told ISRAEL21c. “The note shows me that they’re aware that we’re treating the injured and that it’s okay to refer patients who need enhanced treatment. The note was like any normal letter between two hospitals.”

“I was deeply impressed by the dedication of the medical staff that is sparing no effort to provide the injured patients, many of them children, with the best possible medical care,” Lars Faaborg-Andersen, head of the Delegation of the European Union to Israel, said in 2013 after visiting Syrian patients in Israeli hospitals. “This commitment to the welfare of other human beings, regardless of the fact that they belong to an enemy nation, should be a source of pride to all Israelis.”

Dr. Kamal Al-Labwani, considered one of the most prominent members of the Syrian opposition movement, came to Israel in 2014 to visit the Syrian casualties hospitalized here.

“I am filled with appreciation for the devoted medical care that the Ziv Medical Center is providing for the Syrian casualties, people from my nation, who have been injured in the war. This is a touching humanitarian gesture and an opportunity to bridge between the nations and a hope for peace in more quiet times,” he said.

Throughout Israel’s history, doctors have treated people regardless of their ethnicity, even if their country was at war with Israel. Ziv doctors cared for enemy soldiers and a Syrian pilot as far back as the 1982 Lebanon war, hospital officials said.

“We’re saving lives, not with expectations for the future. We’re doing it because it’s our job,” said Hadary. “Let’s hope for peace and be realistic at the same time.” 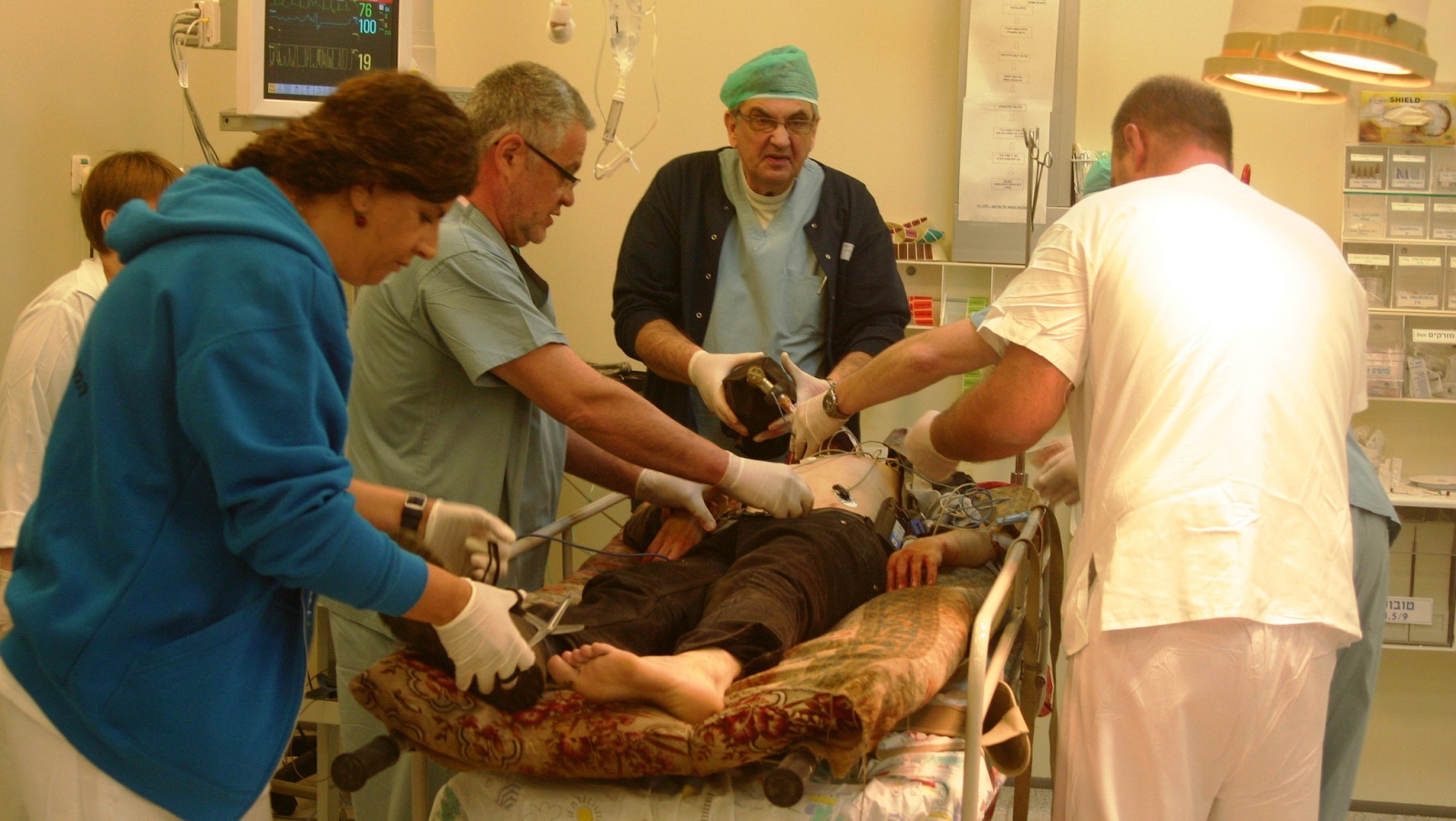 A Syrian patient receiving treatment in the trauma unit at Ziv Medical Center in Israel. Photo by Simon Haddad

IL4Syrians, known for sending supplies to Syrians in need, also supports 17 field hospitals and surgery rooms in Syria, all manned by Syrian NGOs.

“We are a group of Israeli citizens who love their homeland and believe in a Jewish tradition and culture that values a compassionate, open-minded respect for the sanctity of human life and dignity.  We believe we are blessed to be born in a democratic country that enables its citizens to travel to challenging and dangerous places,” reads the group’s mission statement.

And while the majority of Israel’s humanitarian medical aid has been dedicated to Syrians these last few years, local hospitals and aid organizations are offering charitable medical support to anyone who needs it. 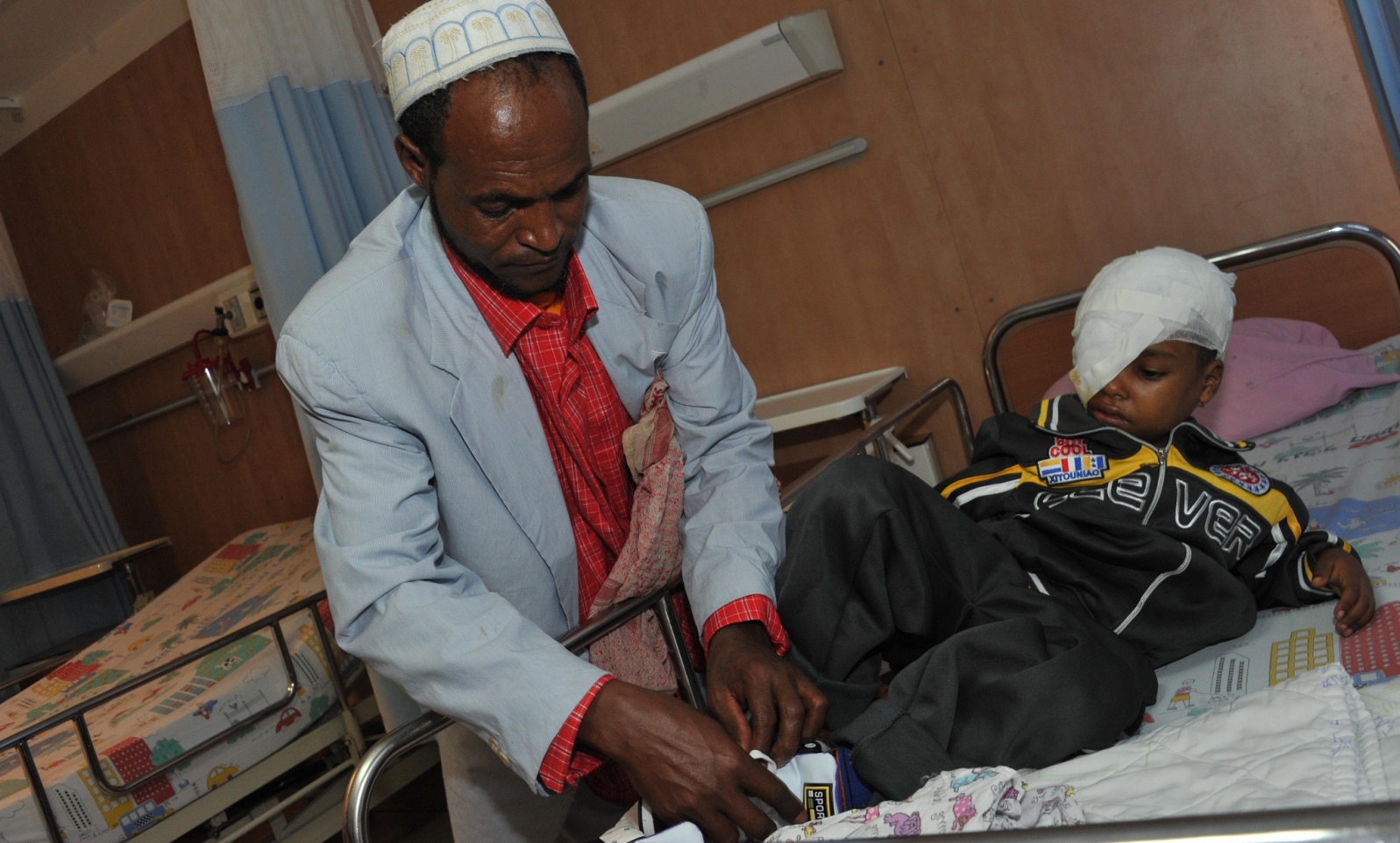 Abdul Razek, an eight-year-old from Ethiopia, was violently attacked by wild hyenas and brought for treatment to Western Galilee Hospital in Nahariya. Photo by Rony Albert

A cross-border humanitarian mission brought a young Muslim Ethiopian boy, who was almost mauled to death by a wild hyena, to the government-run Western Galilee Hospital in Nahariya for lifesaving surgeries.

“It’s a humanitarian effort,” Dr. Masad Barhoum, director-general of the Nahariya hospital, told ISRAEL21c. “It is Israel’s nature to help whoever can be helped. I’m proud to be a part of this healthcare system that acts without hesitation to provide humanitarian aid internationally when we are able. This is an all-embracing mitzvah [imperative].”

If you would like to find out more about Israel’s phenomenal aid programs overseas, view our exhibition: My Name is Israel.