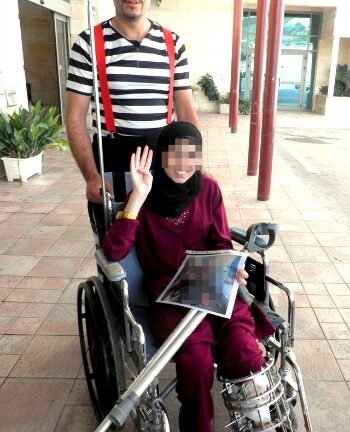 Syrian teen is all smiles as she checks out of Ziv Medical Center. (Chana Bikel) 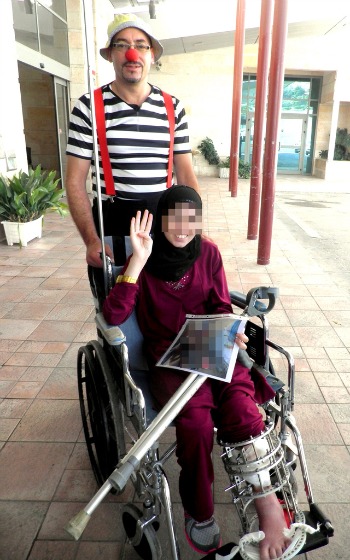 Syrian teen is all smiles as she checks out of Ziv Medical Center. (Chana Bikel)
A Syrian teenager who was critically injured in her country’s civil war was all smiles as she left an Israeli hospital after more than a month of surgeries and rehabilitation. IDF medics initially brought the 15-year-old young woman to the Ziv Medical Center in Safed with serious shrapnel injuries to her left leg and stomach, after Syrian medics amputated her right leg.

The teenager’s mother, who accompanied her daughter across the border and stayed with her during the month-and-a-half rehabilitation process in Israel, thanked Ziv medical staff for giving her daughter a new lease on life.

The mother told the doctors that her daughter was wounded during bombings in the Daraa region where they live, and that her brother, grandmother and cousin were killed in those strikes.

Ziv Medical Center doctors succeeded in saving her left leg, and found a donor to cover the costs of getting a prosthetic leg for her right leg.

One of the IDF paramedics broke down upon seeing the young woman using crutches to walk out of hospital independently. “When we brought her here a month and a half ago she was near death. I can’t believe she’s standing on her feet and walking. What an unbelievable feeling this is to see her like this,” the paramedic said.

The young woman’s mother left the medical center, saying: “I wish the people of Israel a Happy New Year. I hope there will be peace and we will be able to meet again in a saner Middle East because we are all just people.”

Since the civil war broke out across the border, 85 Syrians have been at the Ziv Medical Center. At the moment, 17 of the wounded are still hospitalized at the Safed hospital.