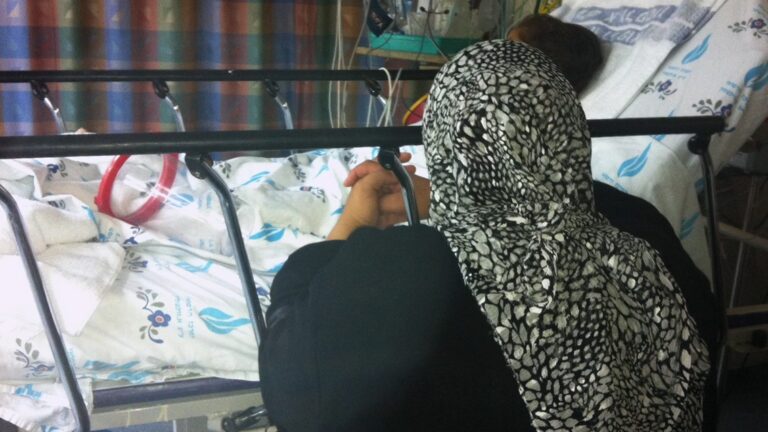 Mother of Syrian girl saved by Israeli doctors watches over her daughter at Wolfson Medical Center in Holon.

A four-year-old Syrian girl is now recovering at the Wolfson Medical Center in Holon following life-saving open-heart surgery earlier this week. Israeli pediatric surgeons volunteered their time to correct the girl’s congenital heart defects and give her a chance at life.

The Save a Child’s Heart humanitarian organization brought the toddler and her mother to Israel via Jordan. The mother told reporters she was hesitant about coming to Israel because it is an enemy country to Syria but also said the only thing that mattered for her was having the opportunity to save her daughter’s life.

According to the child’s mother, doctors in Syria discovered the girl’s heart condition she was six months old, but proper medical care was not available.

“We kept taking her to doctors and to the hospital but nothing could be done for her,” the mother said. “She couldn’t run and play like other children and she was very sick most of the time.”

Dr. Lior Sasson, one of the physicians to volunteer with the SACH medical team, said the child was in grave condition when she arrived in Israel and would not have survived much longer. “Without the surgery, she could have died within a few months, maybe even weeks,” he said.

Doctors said the surgery was successful and their young Syrian patient is currently recovering in the hospital’s Pediatric Intensive Care Unit.

At Wolfson Hospital, the mother was able to meet other SACH patients and their families – many of whom are Palestinian and speak Arabic.

Prior to this surgery, SACH had treated more than 3,000 children from 44 developing nations. This week Syria became the 45th country.

UNCOVER ISRAEL - Get the ISRAEL21c
Weekly Edition free by email
Sign Up Now!
Bring Israel's story to life.
Millions of people around the world rely on us to gain a deeper understanding of Israel. We are the trusted source for original content you won't find anywhere else.
You can make a difference. Donate today to support journalism that brings Israel’s story alive.
SUPPORT ISRAEL21c
Read more on:   News, Save a child's Heart, heart surgery, Israeli doctors