When Israeli doctors performed a CT scan on Abdulrazak, an eight-year-old Muslim boy from Ethiopia who was almost mauled to death by a wild hyena, they were surprised to find the rabid animal – that caused severe head, scalp and eye injuries to the young victim — had also taken a piece of his jaw bone.

So, doctors at the government-run Western Galilee Hospital in Nahariya added a bone graft operation to the list of planned life-saving surgeries already set up.

“We’re trying to perform all the surgeries we can. We’re saving his life and we’re taking him out of danger,” Dr. Masad Barhoum, director-general of the Nahariya hospital, tells ISRAEL21c. “What the hyena did was catastrophic.”

Abdulrazak is in Israel on a lifesaving cross-border humanitarian mission. His journey from a remote Ethiopian village called Enemur to Israel’s northern coastal city is one of bad luck, good luck and a lot of goodwill.

In January of this year, a wild hyena raided Abdulrazak’s village, killing six people and injuring 18. The eight-year-old was among those attacked – and though his father, Alawi, risked his life to pull his son from the wild animal’s jaws, Abdulrazak suffered severe head and eye injuries and also lost an ear.

He was transferred to Attat Hospital, a Catholic hospital 187 kilometers outside of Addis Ababa, and spent his first five days there clinging to life. Over the course of five months, Abdulrazak was bandaged and re-bandaged, but because of a lack of hospital equipment and technology he had no surgeries.

In mid-June, a nun from the Philippines who is also an anesthesiologist at Attat Hospital, called Dr. Rick Hodes, medical director of Ethiopia for the American Jewish Joint Distribution Committee (JDC), and asked him to come see Abdulrazak. 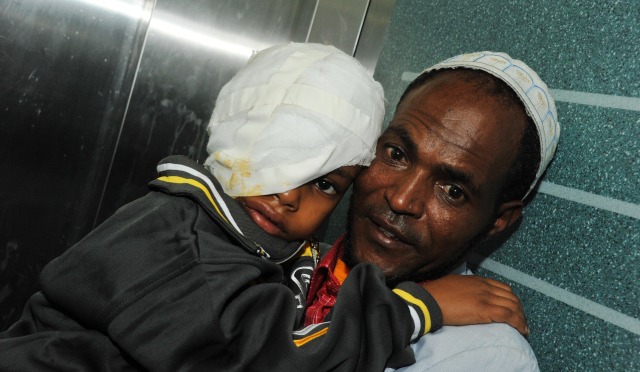 The boy will be hospitalized for about a month.

“When I examined him, I noted that he had literally been ‘scalped,’ missing his right ear; he had a membrane over his right eye, and he had raw, exposed scalp on the top, back and right side of his head,” writes Hodes on his blog.

Hodes quickly understood that if Abdulrazak weren’t treated properly, his wounds could become infected and he could die.

Hodes set in motion a humanitarian operation that includes Bedouin-Israeli diplomat Ishmail Khaldi, Israeli Ambassador to Ethiopia Belaynesh Zevadia, Friends of the Western Galilee Hospital, the United Jewish Communities, the Jewish Agency, the JDC and the Israeli ministries of foreign affairs and health to bring Abdulrazak to Israel for proper medical treatment.

“It’s a humanitarian effort. We’re helping a boy,” Barhoum tells ISRAEL21c. “It is Israel’s nature to help whoever can be helped. I’m proud to be a part of this healthcare system that acts without hesitation to provide humanitarian aid internationally when we are able. This is an all-embracing mitzvah [imperative].”

Everyone gets equal treatment

Days after Abdulrazak and his father arrived in Israel, doctors performed eye surgery on the young patient. Barhoum says that as soon as it became clear that his right eye could not be saved, doctors raised the idea for a prosthetic.

“But it turned out that a prosthetic is socially unacceptable in his village,” says Barhoum, stressing the importance of respecting the family’s traditions. “We closed the eye with skin so there will be no chance of future infections.” 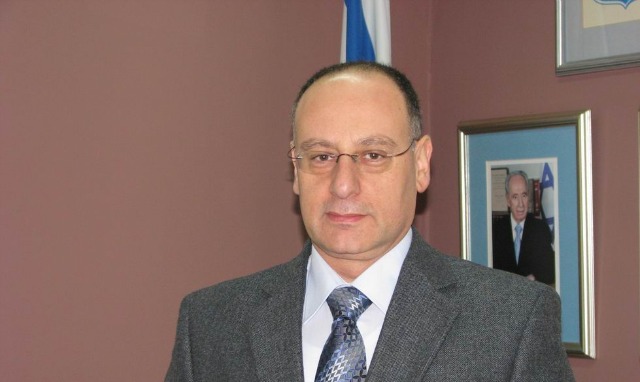 Dr. Masad Barhoum of Western Galilee Hospital: “It is Israel’s nature to help whoever can be helped.”

Abdulrazak is scheduled to undergo a series of other procedures at the Western Galilee Hospital including plastic surgeries, skin grafting on large parts of his head, and a bone graft to reconstruct his jaw “so that he can eat properly,” says Barhoum, the first Arab-Israeli to direct a government hospital in Israel.

The medical costs, bringing Abdulrazak and his father to Israel and supporting them financially while they’re here are expected to run between $40,000 and $50,000.

“The boy will likely stay here for about a month and then return to his village. We want him to return to his way of life as soon as possible. Even though everyone here is trying to help, you can see that they sense our embrace but they do not feel at home,” explains Barhoum. “If he has to come back for future surgeries, we will bring him back.”

Amir Yarchi, CEO of Friends of the Western Galilee Hospital, tells ISRAEL21c that the organization kick-started a fundraising campaign upon hearing of the boy’s plight a few weeks ago and is still raising funds to cover the necessary treatments, transportation and housing arrangements.

The Western Galilee Hospital is one of the largest medical centers in northern Israel. It serves nearly half a million residents of the region, as well as Israeli soldiers and UN personnel.

“We help everyone regardless of who they are,” Barhoum says, noting the hospital currently is treating a 13-year-old Syrian girl injured in her country’s civil war.

“The doctors treat everyone equally. It’s our pride that we can treat each patient for being a person,” he says. “I hope we will be a partner in future humanitarian missions. This is not our first and we consider it a huge honor to be able to help where we can.”