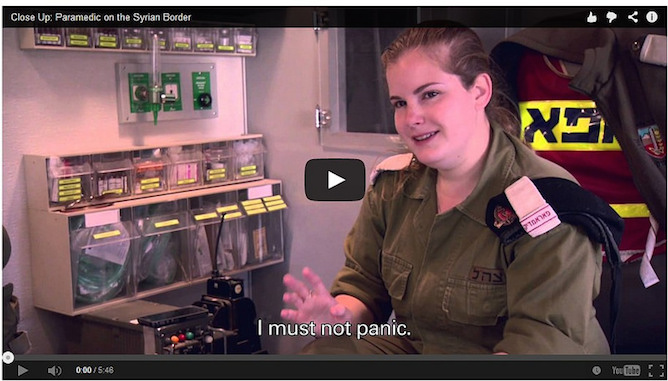 Staff-Sergeant Erez on the Syrian border. 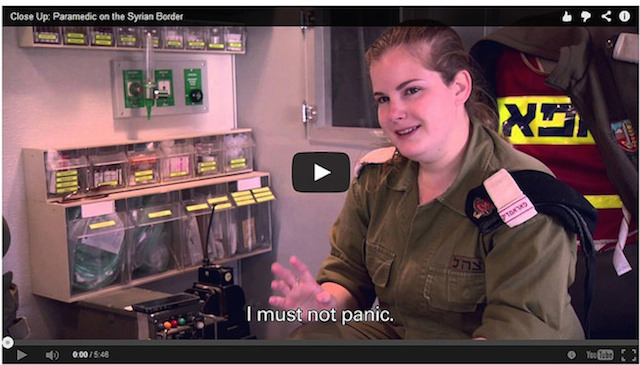 Staff-Sergeant Erez on the Syrian border.

IDF Staff-Sergeant Noga Erez looks into the camera awkwardly and says that she doesn’t understand why she’s the focus of a video piece. One of 120 soldiers recently awarded the country’s highest honor of distinction for outstanding soldiers; Erez is a young paramedic who has dedicated her army service to treating Syrians wounded in their civil war.

But from the opening frames of the heartfelt video produced by the IDF, it is obvious why this medical worker – who likes to sew clothes in her spare time – is being spotlighted. She tells her story as well as the important story of the Syrians being treated by Israeli medics.

But the video offers a beautiful portrait of something beyond that. Through Erez’s recollections, the viewer discovers an interaction between people in two nations that are officially enemies.

When Israel first set up a field hospital along the northern border in early 2013, the project was hush-hush. The IDF did not want to encourage Syrians to its border but at the same time was ensuring medical treatment for those who did come.

Erez was told during her first four months in the hospital that “everything was secret.”

“The only thing I remember them telling me was, ‘You don’t know where you’ve arrived, you don’t know what experiences you’re going to have here,’” she recalls in the video.

The soft-spoken Erez gives a face to the Israeli medics who are treating victims of the bloody civil war in Syria.

“His name was Tariq. He was 25 years old, and they shot him in both legs,” she tells the camera about one of the victims. “He came to Israel leaving behind his wife and a four-month-old daughter.”

Erez describes how she held his hand — “the way you hold the hand of a woman giving birth” — to support him on the way to the field hospital.

She talks about how happy Tariq was that Israelis were helping him. After he was treated and taken back to the border, he told her he hoped they would meet again and drink coffee together.

Erez speaks about how she’s learned how to hold a basic conversation in Arabic, and how the powerful combination of good intentions and sign language can break barriers.

Of course, Syrians wounded in their civil war have also been admitted to hospitals in Israel proper. In March of this year, Israeli doctors saved the life of a six-year-old boy brought to Rambam Health Care Campus comatose and almost dead.

Another high profile case involved a patient at Ziv Hospital in Safed, who arrived with a handwritten note pinned to his clothing for the Israeli doctors.

Erez says she doesn’t feel special. “If it wasn’t me, it would be someone else” saving lives along the border, she says.

Yet, the importance of the work does not evade her. “They always joke that we are writing a part of history, and that maybe our grandchildren will learn in school that the Israel Defense Forces treated the wounded in the Syrian civil war,” she says. “My grandchildren will know that I was there. And I will not be embarrassed.”