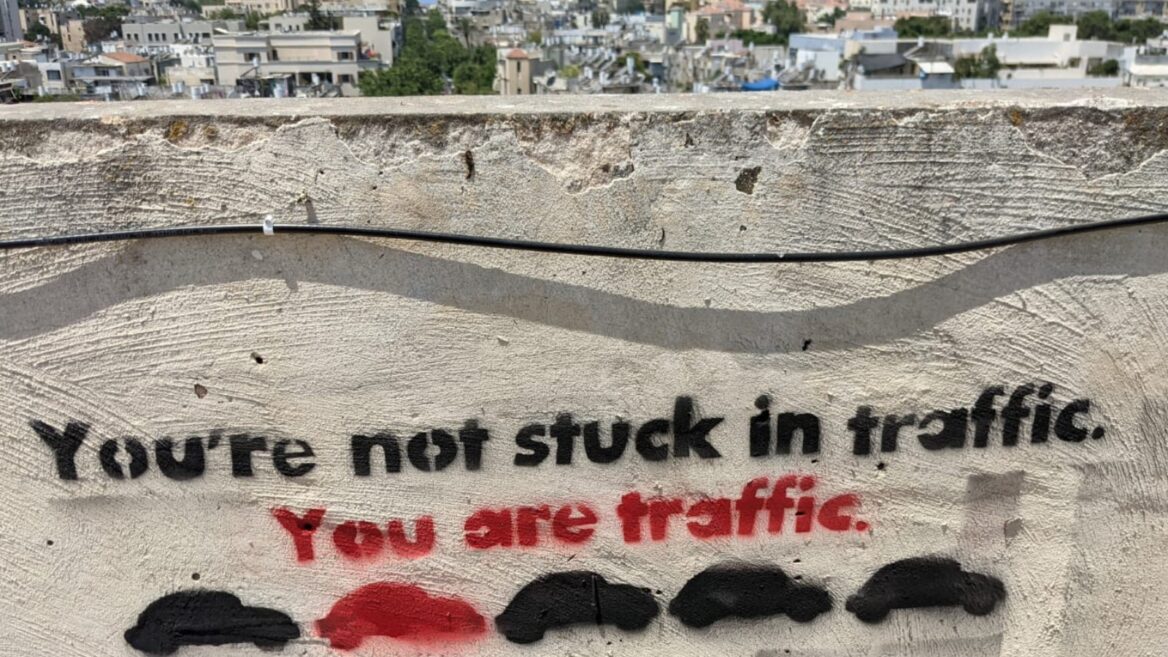 Why is it so dang hard to get from one place to another by car these days?

You could blame it on Covid-19 – people remain uncomfortable being in a shared space like a bus or train – or on policies that continue to encourage car usage over public transportation.

“People are still scared to go on public transportation,” admits Igal Chemerinski, chief revenue officer of ParkNav, an Israeli startup that helps find parking spots in the big city, where one-third of all traffic congestion is due to motorists looking for parking.

“People were finally going back and then Omicron came,” Chemerinski tells ISRAEL21c.

Regulations are being updated around the world to limit the number of cars that can enter a city. Copenhagen has set a target of 75 percent use of sustainable transport (buses and trains, electric battery-powered cars) by 2025. London and San Francisco have longer-term targets of 80% by 2041 and 2050, respectively.

Tel Aviv has turned the Ramat HaHayal high-tech neighborhood into “a smart city accelerator and playground,” notes Yuval Lib, who runs smart city initiatives for Amdocs. “Things you see in the streets in Israel started here.”

Tel Aviv certainly needs change: More than half of all trips in the city are currently made by car.

Education will be key, Chemerinski tells ISRAEL21c. “Some people are not used to using Moovit, PayPal or taking a scooter. Education can make it less scary to come without a car. There may be an opportunity to create a universal interface for the tech challenged.”

ISRAEL21c looks at 11 of the most promising local startups that can help reduce the amount of time we sit in traffic.

Arriving at your destination is only half the battle. You then need to find parking. That’s where companies like ParkNav can help.

“We take data from many sources – cell-tower data, mobile-payment data, carsharing data, data from sensors in the car and satellite imaging – and we combine it into predictions,” ParkNav CEO Eyal Amir tells ISRAEL21c. From that, ParkNav calculates a percentage.

“Green means you have at least an 80 percent chance of finding a spot on a particular street. Anything below 40% we color red.” ParkNav’s navigation tool then guides you to those green streets.

But parking isn’t the end game. “In 10 to 20 years, you’ll be able to see if a Starbucks is open, if there is a table available with four seats outside and if they didn’t run out of almond milk for you,” says Amir.

Another leading Israeli parking app is Jerusalem-based Wisesight, which installs sensors and live video feeds in parking lots and on the street. Parking lot operators can use Wisesight to set differential prices.

In the future, the company hopes to help drivers find their cars using GPS. For now, the main use case is payment. Wisesight cites studies showing that half the time people step away from their cars without activating their parking apps, either by accident or on purpose, translating to parking fines and lost revenue.

Wisesight operates in eight Israeli cities and has pilot projects in Los Angeles, London, Pittsburgh and Dubai. In Israel, the app is embedded in existing payment tools like Pango and Cellopark. CEO Akiva Armon tells ISRAEL21c that the company is working “with four of the six biggest parking industry integrators” in the United States.

According to Israeli startup NoTraffic, 40% of car accidents occur at intersections, yet 99% of signalized intersections are still running on old-fashioned fixed timing plans. NoTraffic’s AI-powered platform optimizes traffic lights so that waiting times are minimized.

The company’s software connects vehicles to the city grid to create a more seamless experience for drivers and to improve overall traffic policy. The company’s AI sensors provide eye-level measurement of approaching drivers. Data is streamed to the NoTraffic cloud in real time for additional processing.

The NoTraffic system even takes into account the presence of scooters and e-bikes. NoTraffic is testing its system in Phoenix and is part of NVIDIA’s Metropolis program for managing traffic with AI.

By 2030, the number of vehicles on the roads will double, while the number of city dwellers will increase from 3.9 billion to 5.1 billion.

Mobi uses artificial intelligence to predict where traffic congestion will happen by installing wireless solar-powered sensors throughout a smart city. The company has partnerships with the US and Israeli departments of transportation, the province of Ottawa, Microsoft and the Technion-Israel Institute of Technology.

Companies like Hertz and Avis have a friend in Autofleet, an Israeli startup with AI-powered software that allows fleet operators to bring their rental-car inventory into the ridesharing economy.

Convincing commuters to switch from their private cars to buses, trains, bikes and scooters is key to reducing traffic. Often dubbed the “Waze for public transportation,” Moovit made news when it was acquired by Intel for about $1 billion in 2020.

Moovit now informs passengers when their next ride is coming in some 3,400 cities across 112 countries in 45 languages with over 500 million users.

In 2022, Moovit hooked up with voice-assisted smart cane maker WeWalk to allow visually impaired people to navigate to the correct bus stops and train stations. 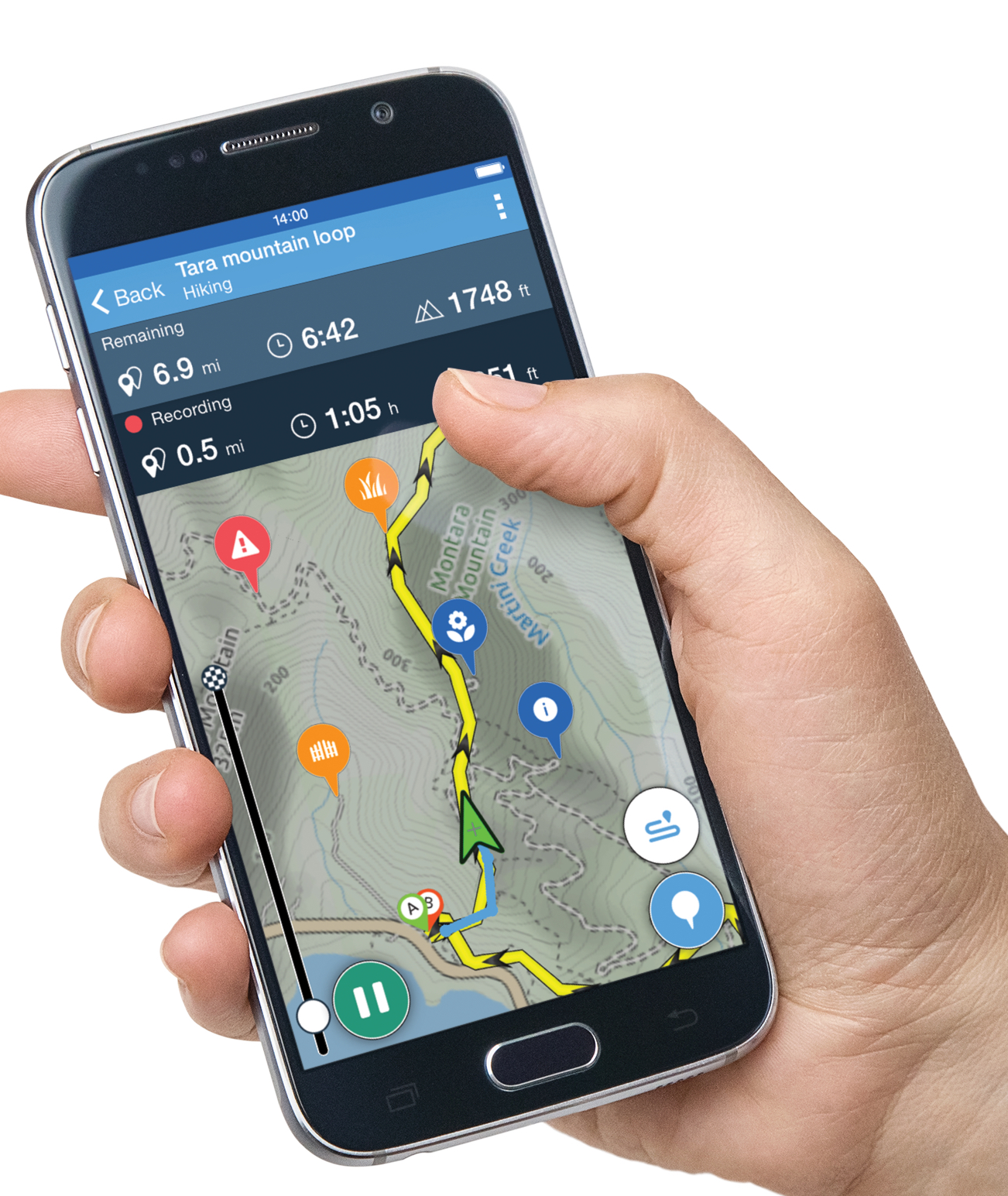 Trailze is like Waze for hikers and bikers. Screenshot: courtesy

An alternative to riding the bus is grabbing a bicycle or an e-scooter from rental stations on city streets. But how will you know where to go? Israeli startup Trailze – which originally provided directions for hikers — provides navigation for urban micro-mobility providers.

In Israel, many commuters rely not on full-sized buses but on shared taxi vans that follow bus routes but are more flexible. That was the idea for Via; the company’s algorithms allow riders to hop on a vehicle at the nearest street corner and get dropped off within a few blocks of where they want to go.

The company’s “Via for Schools” app is being used in New York City to route some 10,000 school buses to their destinations. A Virginia paratransit operator using Via software has logged a 39% reduction in trip duration. In Georgia, Via has cut the cost per trip by 59%.

Launched in 2012, the company now operates in 35 countries and says it has powered more than 90 million rides. In 2021, Via raised a $130 million Series G round, putting the company’s valuation at $3.3 billion.

No roundup of traffic and transportation startups from Israel would be complete without mentioning Mobileye, the Jerusalem-based autonomous vehicle startup that was acquired by Intel in 2017 for $15.3 billion and which is now planning an IPO for later this year at a $50 billion valuation.

The “Mobileye Drive” system will be used in a pilot later this year in Tel Aviv and Munich to run autonomous taxis. These robotaxis won’t reduce traffic congestion on their own, but if they are convenient, comfortable and cheap, they can play a part in persuading people to switch from private vehicles to some combination of public transit and self-driving taxis.

For the pilot, Mobileye will use vehicles from Chinese electric vehicle maker NIO and software from another Israeli company, Intel-owned Moovit. 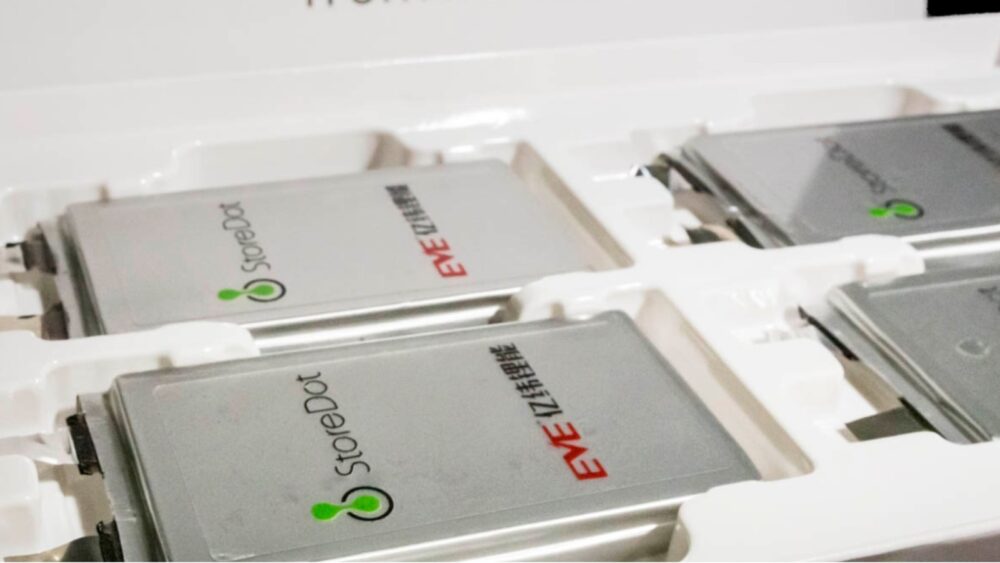 Autonomous vehicles like those from Mobileye are also EVs, powered exclusively by electric batteries. But charging can take time. To make the transition to driverless transportation more attractive, Israeli startup StoreDot replaces the graphite in a standard electric battery with a mix of metalloids which the company says allows it to charge an EV in just five minutes.

Samsung, Daimler-Mercedes, TDK and BP are all investors. CEO Doron Meyersdorf says that BP has seen the electric future and aims to convert is 18,000 gas stations to electric charge spots. The company’s latest slogan: “a 100-mile charge in two minutes.” In 2020, StoreDot announced it would fast-charge drones as well. 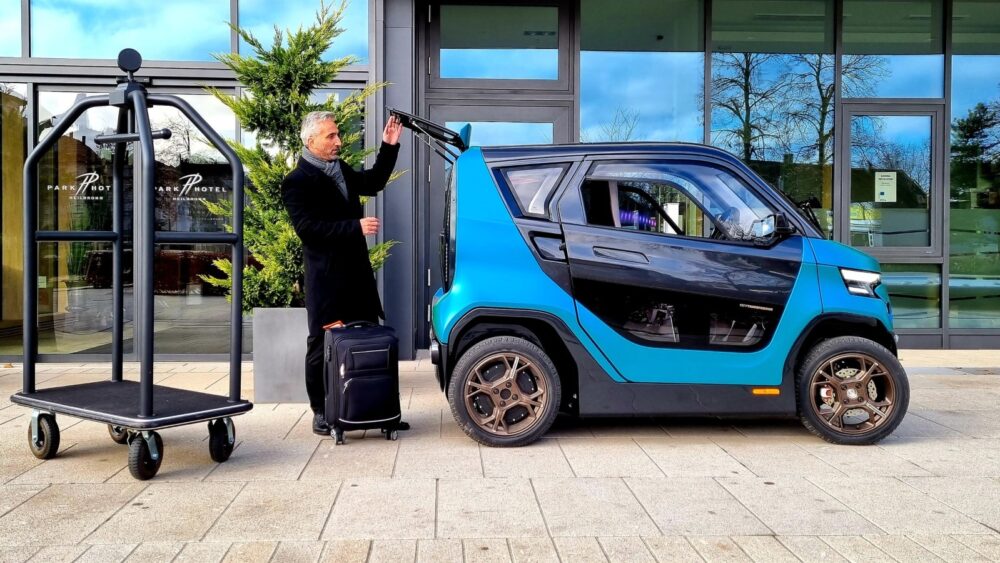 You’ve heard about a bicycle built for two. How about a tiny electric car built for one?

In urban environments, where parking is scarce, a CityTransformer will do the trick. The super-small vehicle even folds; four CityTransformers can fit into a single standard parking space.

The vehicle has a range of 120 to 180 kilometers (74.5 to 112 miles) and a top speed of 90 kilometers (56 miles) per hour. Israeli voluntary emergency response organization United Hatzalah has signed on as a client, reportedly purchasing 1,000 CityTransformers in a deal worth $22 million.

Passenger vehicles (preorder price $14,500) are due to be commercialized in 2025. “More than four billion people currently live in urban areas, and that will only increase in the coming years,” CEO Asaf Formoza says. “People need vehicles for city centers, for narrow streets, for tomorrow’s world.”