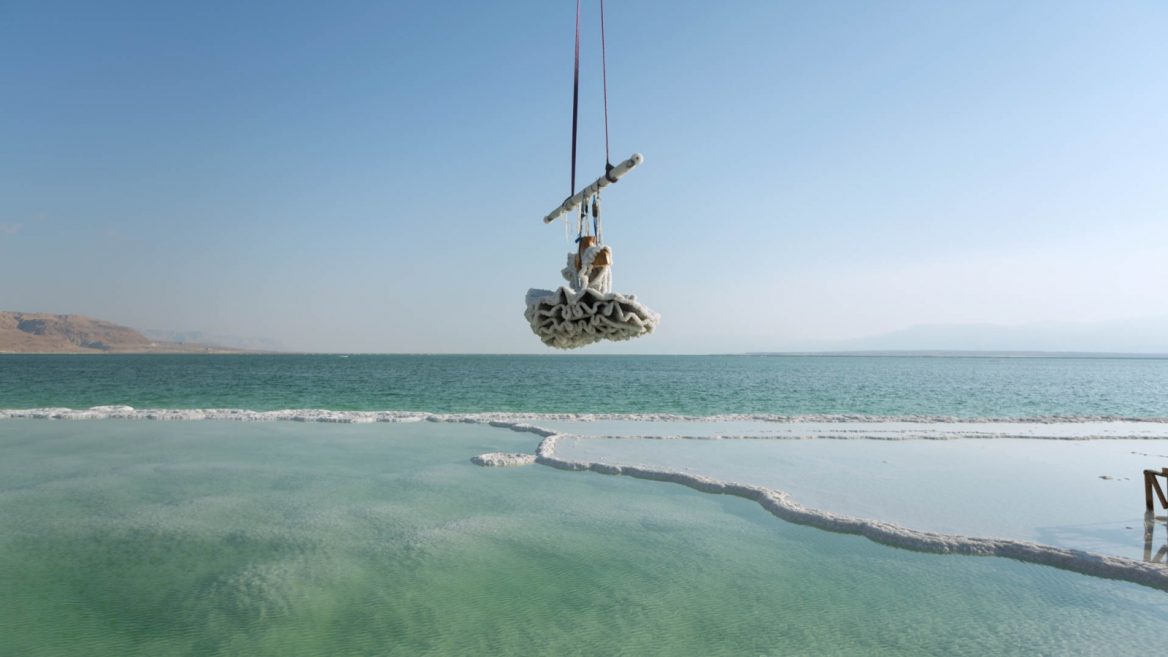 An 11-minute video of renowned Israeli artist Sigalit Landau floating naked on the Dead Sea within a slowly uncoiling spiral of 500 watermelons made a big splash in the art world in 2005.

The Dead Sea has beckoned Landau to return again and again from her Tel Aviv studio since 2003.

Called the “Salt Sea” in Hebrew, and actually a lake, the Dead Sea is the lowest continental surface on Earth. It is hailed for its healing powers and mined for cosmetics and industrial products.

Landau and her team submerged objects ranging from a tutu to a cello in the mineral-rich lake and documented their crystallizing transformation.

“Magical moments happen under the water, so my co-creator Yotam From followed the process through underwater photography,” Landau explains. 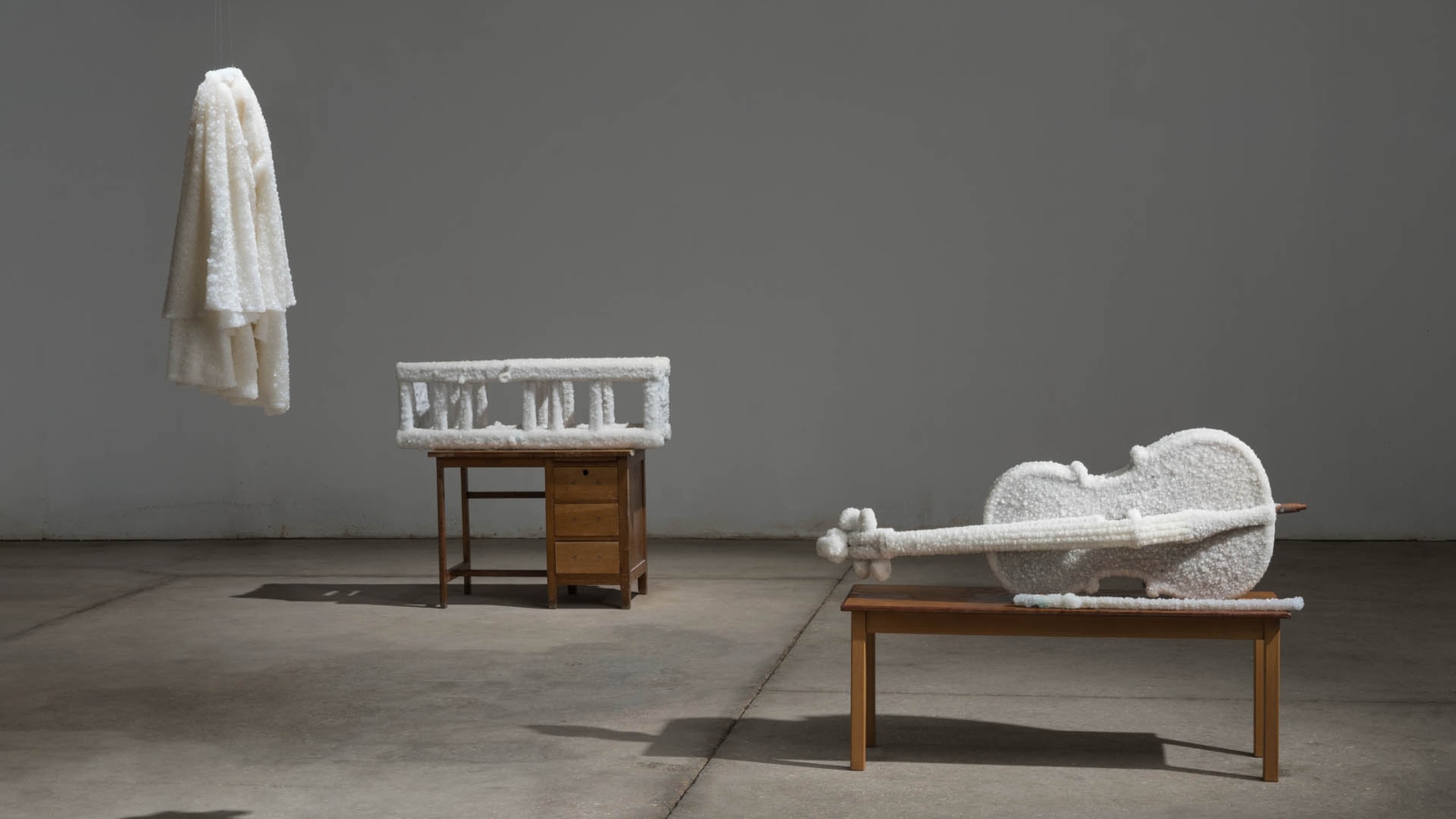 “Her art pieces are cultivated with salt crystals, like an oyster farm, using an organic process to transform mundane, everyday, usually useless artifacts into objects of mesmerizing, haunting beauty,” writes editor David Goss in his introduction. 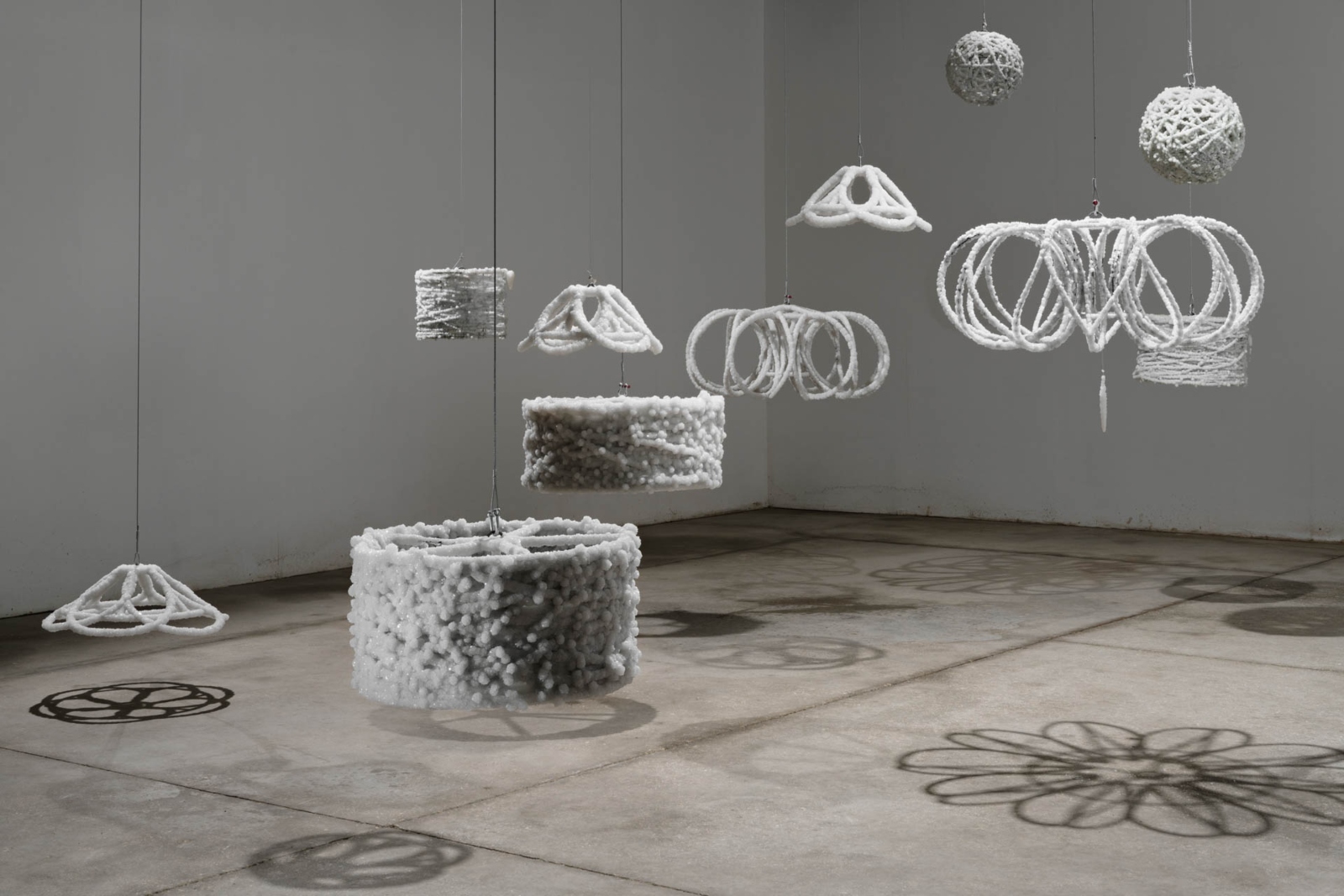 Landau tells ISRAEL21c that her jaunts to the Dead Sea began from a place of memory and vision. 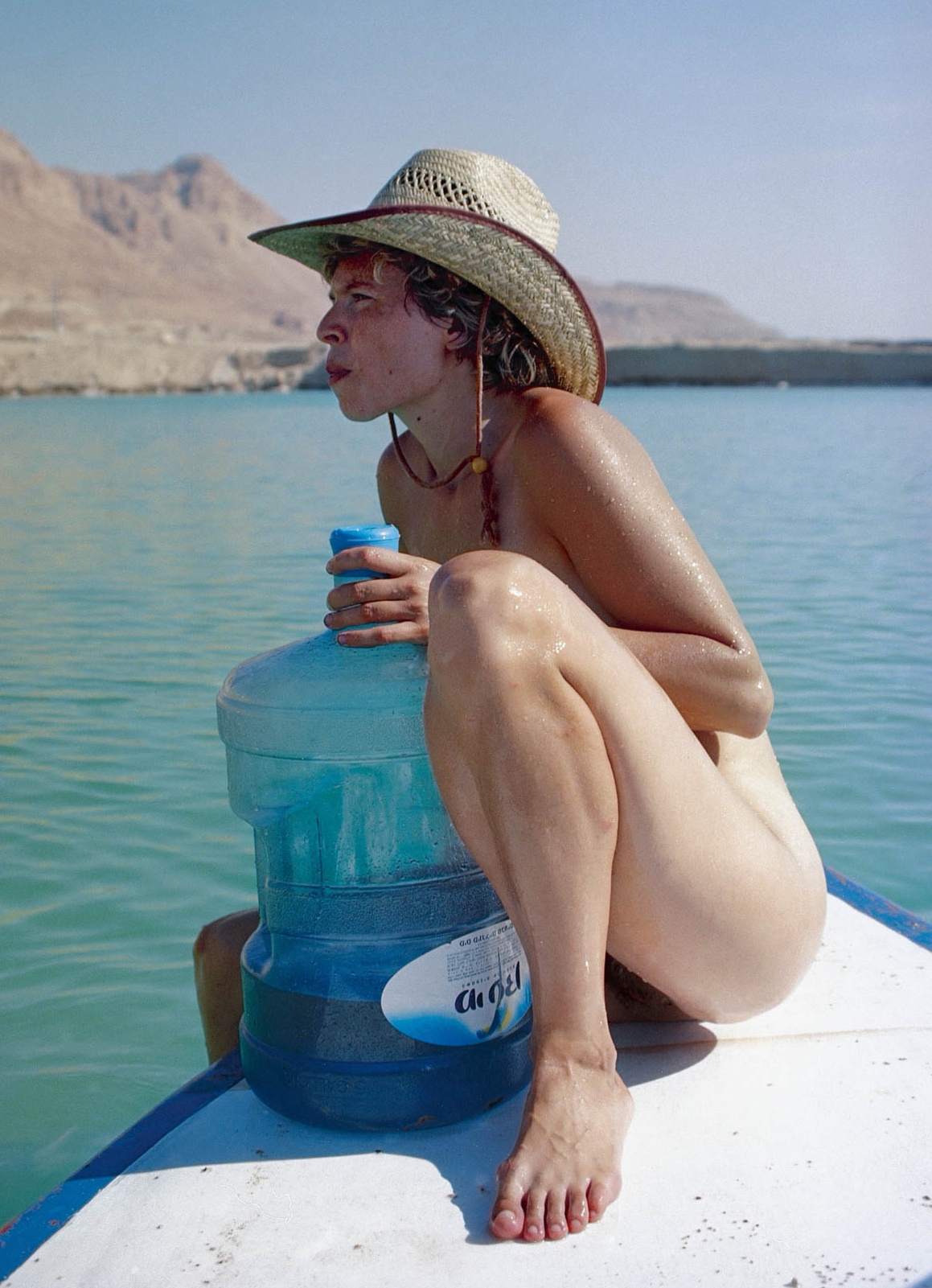 The artist on a surfboard during the shooting of “DeadSee,” 2004. Photo by Masha Rubin, ©Sigalit Landau, 2019

As a child in 1970s Jerusalem, she and her family often took an hour’s drive down to the salty shores. As an artist, she saw amazing potential for expression.

“I was fascinated by the combination of the crystals’ formal beauty and the fact that I can come up with something like a postcard. My grandfather had a big shop where he used to sell postcards,” she explains.

A wire postcard display stand is among the objects she and her team “baptized” in the lake.

“We put in about 10 objects, chosen from over 100 through trial and error,” she says. “I had some grand failures – some things were too big or too small.”

A black tutu was a big success. The following photos show the progression from pre-submerging to finished product. 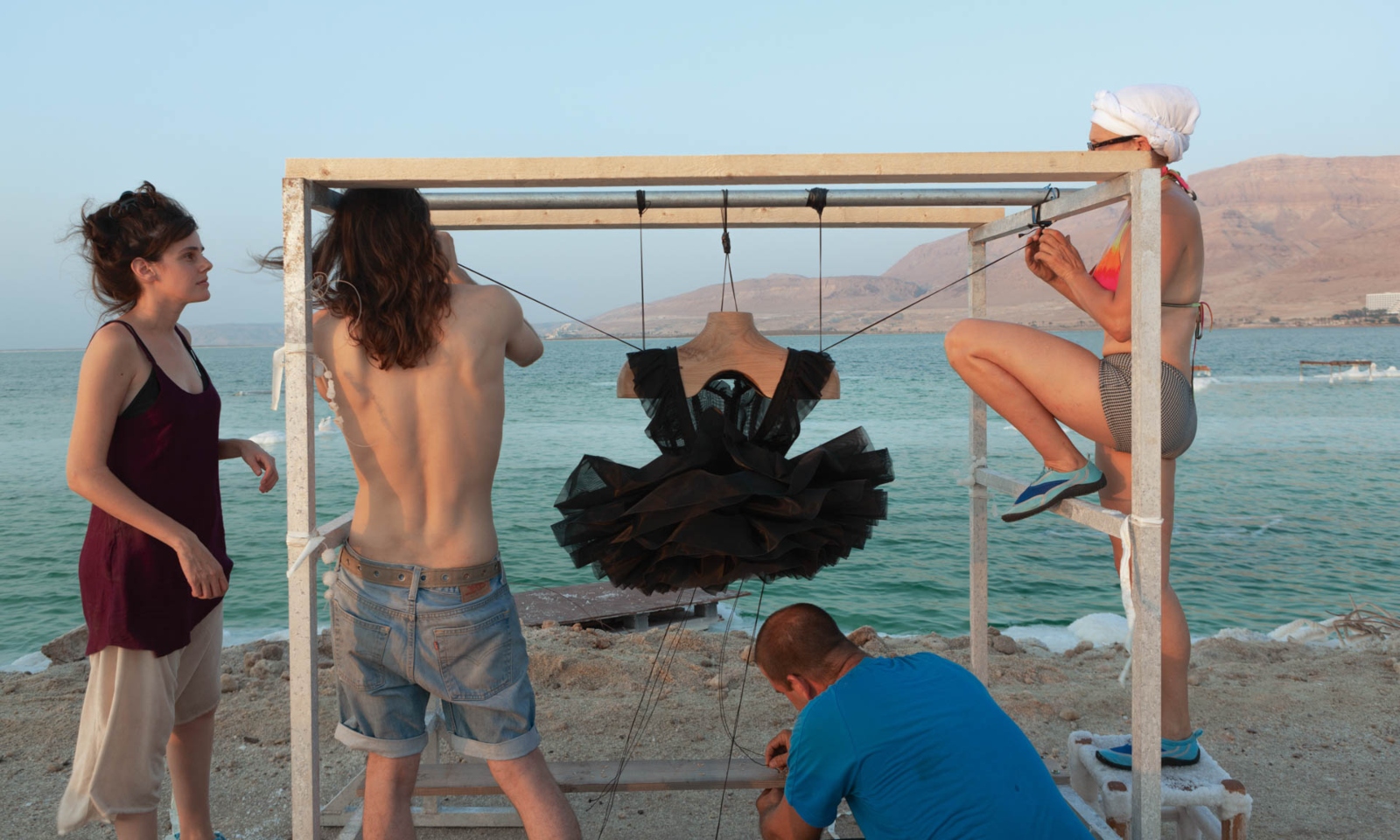 Preparations to lower a black tutu into the Dead Sea, 2016. Photo by Shaxaf Haber, ©Sigalit Landau, 2019 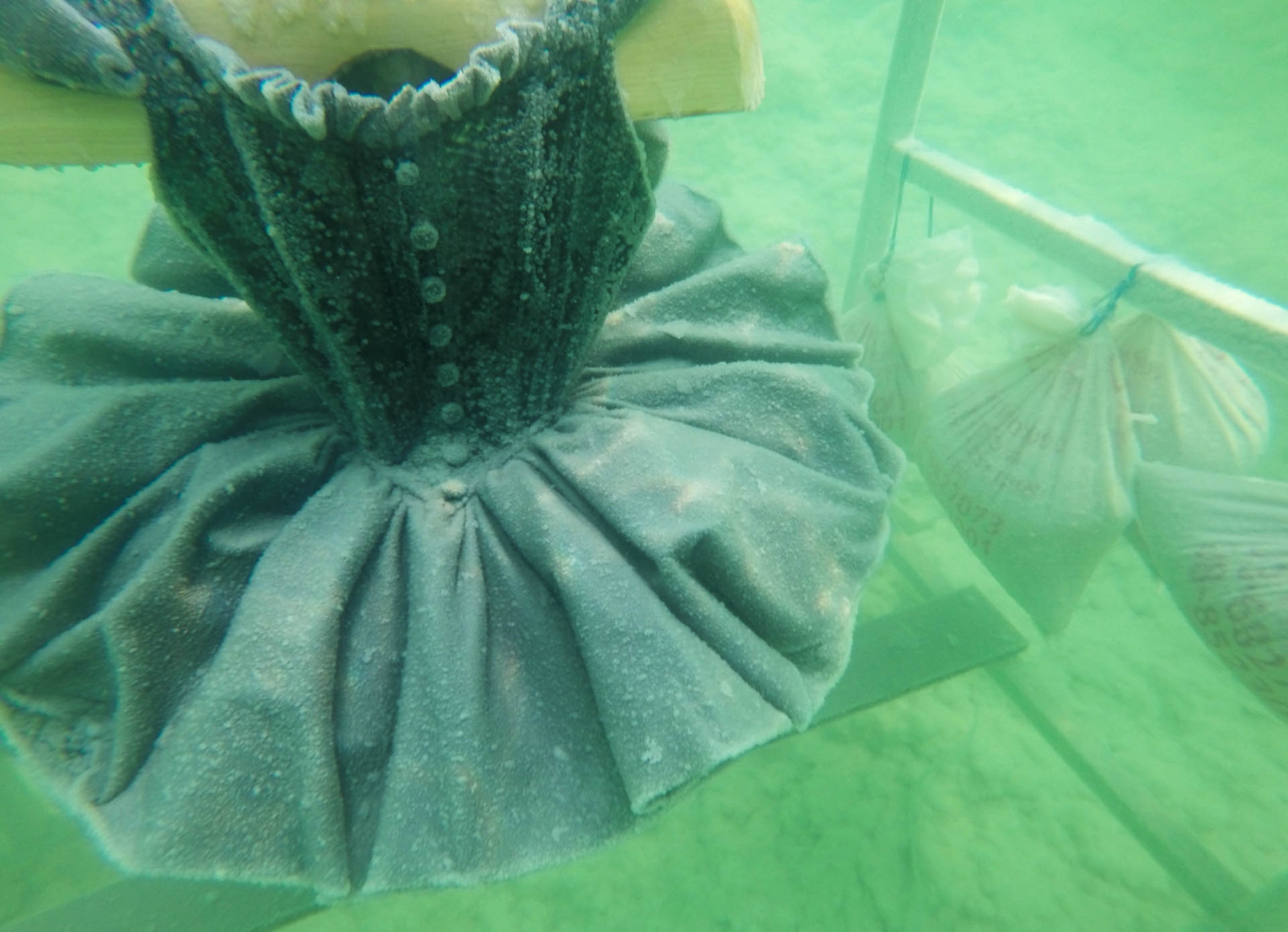 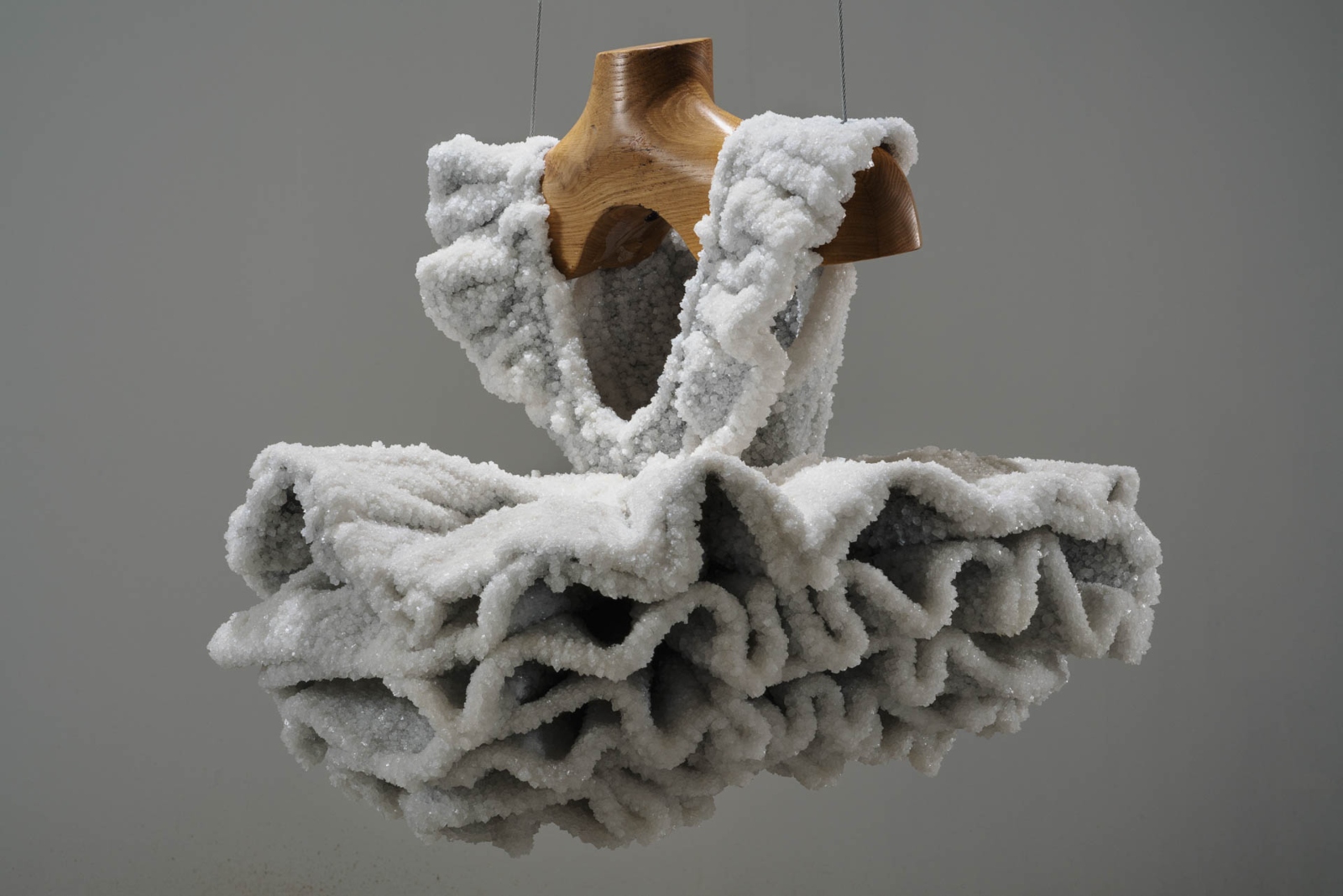 Fishing nets salvaged from fishermen in Jaffa came out of the salty bath  looking like “classical sculptures in marble,” says Landau. 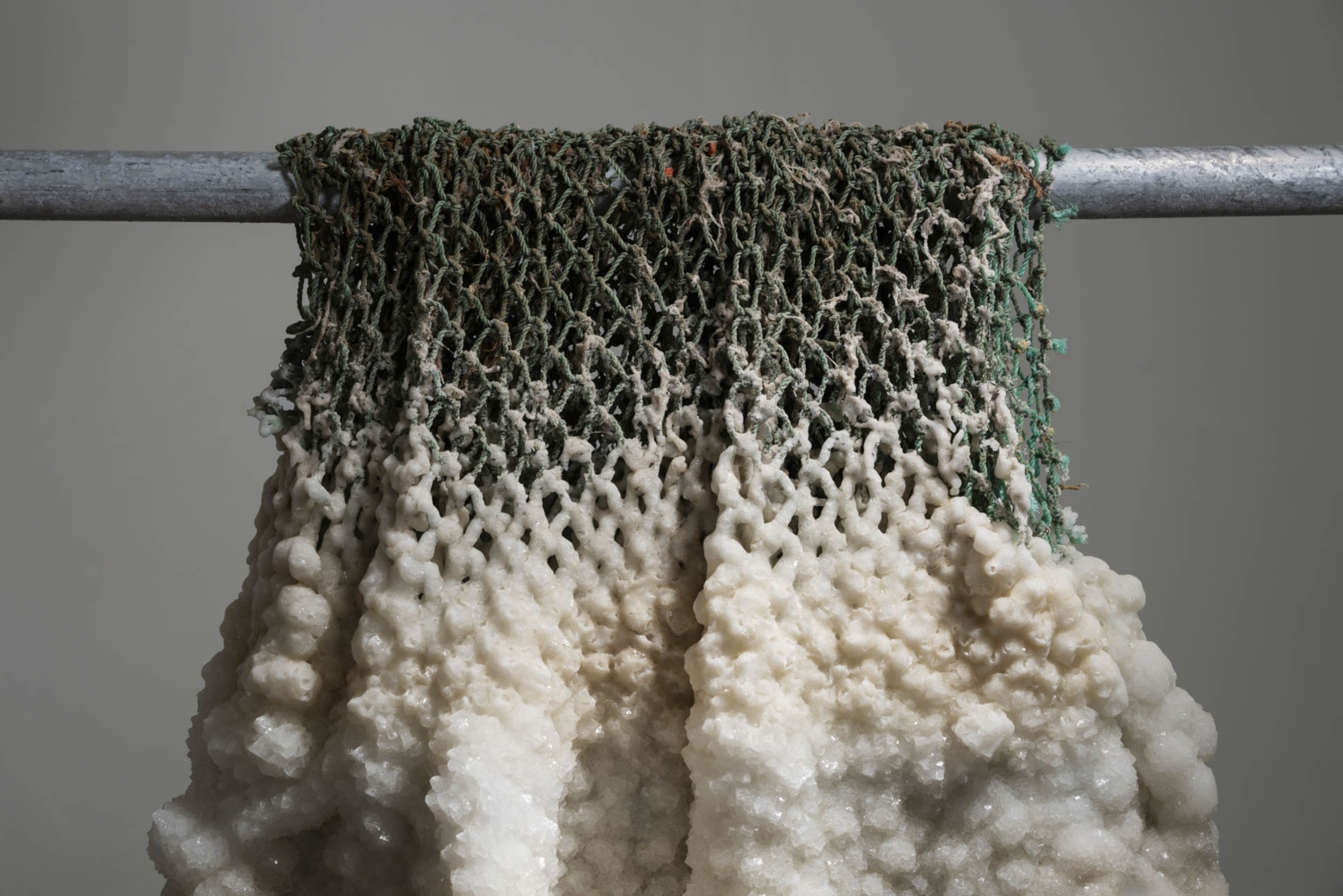 Landau handmade crocheted baby booties and a tapestry challah cover to dip into the Dead Sea.

Pulled up from the water after a few weeks, the objects are encrusted in a way that simultaneously destroys their original purpose and preserves them as works of art. 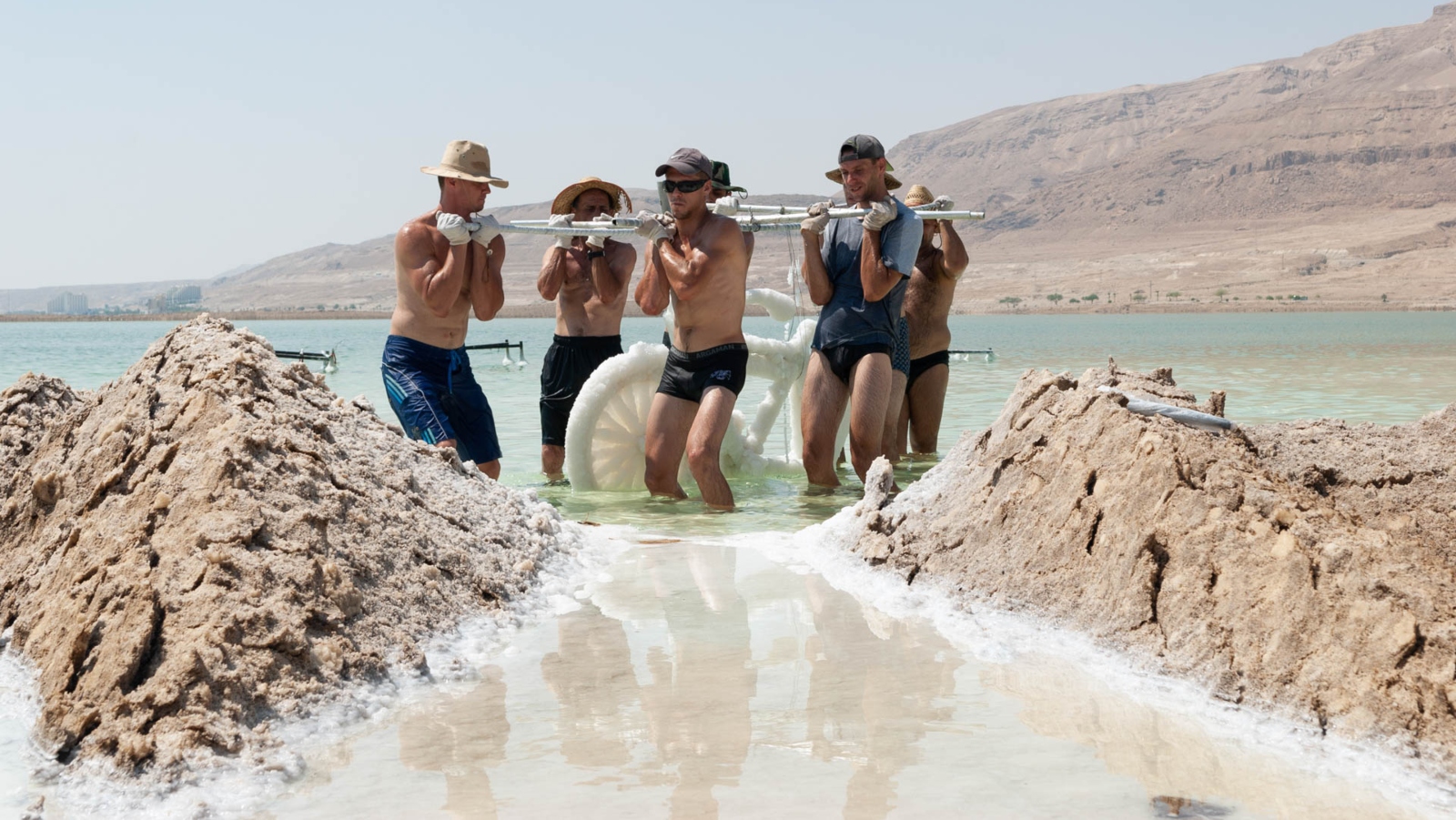 A bicycle coated in salt crystals and weighing more than 150 kg is lifted from the Dead Sea, 2010. Photo by Yotam From, ©Sigalit Landau, 2019 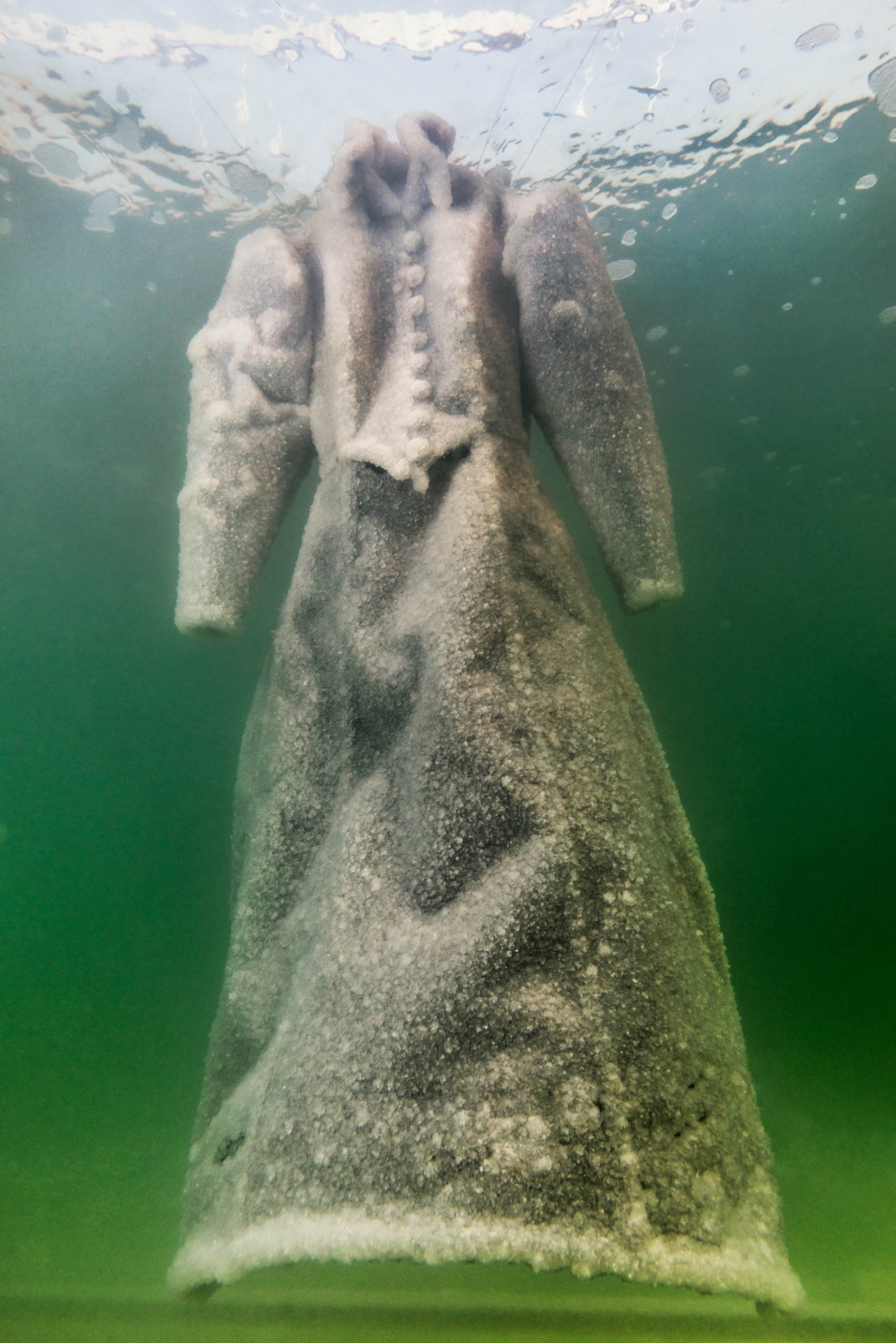 In the summer of 2014, they submerged a thick black dress reminiscent of the wedding gown worn by Israeli actress Hanna Rovina portraying the young demon-possessed Russian bride in the 1922 Yiddish play “The Dybbuk.”

Salt Years has 400 pages filled with images as well as essays by curators, scientists, philosophers and artists including Landau herself.

In her essay, she laments the rapid depletion of the Dead Sea, mostly due to human interventions.

Her dream project is “a salt-crystal bridge that would take the form of a pier or a float and serve as both a passageway and a meeting point within the Dead Sea’s extraterritorial waters” connecting Israel and Jordan.

“Using methods that I have been developing for over 15 years, massive, beautiful salt crystals will gradually grow upon a core structure. Starting from the center of the lake, it will gradually expand both eastward and westward, until it reaches both shores.”

If you want to purchase Salt Years, by Sigalit Landau, click here.

UNCOVER ISRAEL - Get the ISRAEL21c
Weekly Edition free by email
Sign Up Now!
Bring Israel's story to life.
Millions of people around the world rely on us to gain a deeper understanding of Israel. We are the trusted source for original content you won't find anywhere else.
You can make a difference. Donate today to support journalism that brings Israel’s story alive.
SUPPORT ISRAEL21c
Read more on:   Culture, art, Dead Sea, Sigalit Landau