Cleopatra knew about the healing properties at the Dead Sea thousands of years ago. Today, the same one-of-a-kind results are still sought by people seeking long-lasting relief from incurable chronic conditions such as psoriasis, asthma and arthritis.

A stay of 14 to 28 days allows the sun and minerals at this lowest spot on Earth to work their magic.

“It’s very effective and 100 percent natural, plus it’s relaxing because you are at a beach resort,” says Pini Shani, head of marketing at the Tourism Ministry’s international department. “Many of those who come have tried other things that didn’t work. A few thousand people return year after year.”

One of those people is Matthew Katz, whose psoriasis had plagued him for decades. The first time he came was in 2007, arriving from his home in Connecticut for climatotherapy treatment at Dr. Marco Harari’s DMZ Medical Center– currently the only facility of its kind at the Dead Sea.

“My skin was great for six months, and I became an advocate for the Dead Sea through further research,” Katz tells ISRAEL21c. 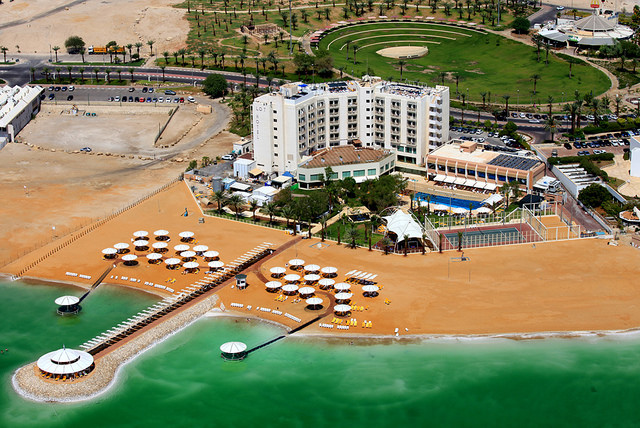 Dr. Harari’s DMZ Medical Center is based at the Lot Spa Hotel.

He explains that the rim of the Dead Sea filters the sun’s ultraviolet rays, “so you’re getting only ‘good’ UVB, which doesn’t happen anywhere else on the planet.”

The Dead Sea – called the Salt Sea in Hebrew — is 27 times denser than Utah’s Great Salt Lake. “Because of the heat there in April to October, the minerals and the vapors from them rise, and that relaxes you and makes your breathing and digestion better. The water actually pulls toxins from every organ. For arthritis, it’s the mineral-rich mud that does the trick.”

Katz now lives in Israel and runs HealthRightUSA, a worldwide educational nonprofit offering a 21-day program of exercise, nutrition and holistic healing classes designed to enhance the effects of the Dead Sea by prolonging and increasing “internal” wellness after clients leave Israel. He’s seeking private funding to get this program going next spring for 60 patients over six months, and is in close touch with Harari and his staff.

Last summer, Katz represented Harari in Paris at an International Psoriasis Convention. “I stood in front of 250 doctors and told my story, wearing shorts and a t-shirt to show how clear my skin is,” he says.

Harari’s specialty is climatotherapy, a medical discipline using a region’s special climate to treat chronic conditions. He first tailored this to the Dead Sea about two decades ago. 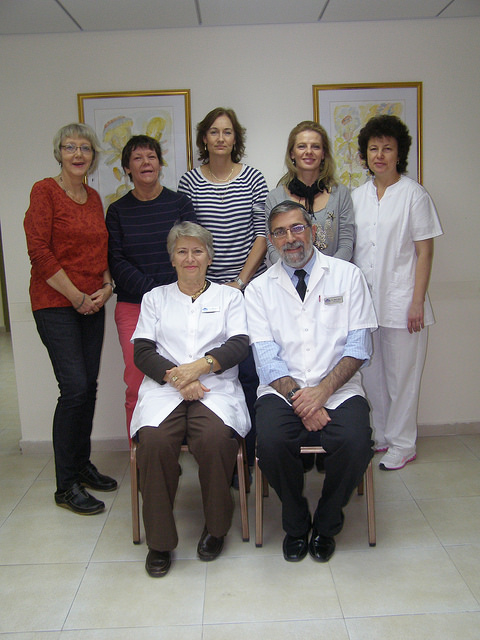 Dr. Marco Harari and his staff.

“There is a unique combination of several climatic factors here that allow what we call natural selective phototherapy, or treatment with natural light. We obtain excellent results when we combine this unique way to receive sun exposure with balneotherapy, or bathing in salt water,” Harari tells ISRAEL21c.

His studies about the effectiveness of this approach have appeared in the International Journal of Dermatology, Journal of Asthma and medical publications. He’s doing ongoing studies in conjunction with universities in Europe, and soon also in Asia.

For the common skin conditions psoriasis, atopic dermatitis and vitiligo, “the Dead Sea offers the only serious treatment option without side effects and with long-term improvement,” Harari says.

For people with rheumatic or joint diseases such as osteoarthritis, arthritis and fibromyalgia, the waters are more critical than the sun, he says. “We add to the protocol a rehabilitation program including sulfur pool baths, black mud applications — sometimes cold and sometimes warm — and physiotherapy.”

The Dead Sea air, oxygen-rich and free of allergens, also alleviates symptoms and improves quality of life for patients with respiratory diseases such as asthma, allergic rhinitis and cystic fibrosis.

“They experience great improvement, for instance in the number of infections they get afterward,” Harari says.

“There is increased barometric pressure at the Dead Sea, so partial oxygen pressure is increased and it is like breathing about six percent more oxygen. People with chronic obstructive pulmonary disease, like heavy smokers or those with bronchitis, immediately feel the difference.”

Based on measurements of UV radiation at all times of the day and year, Harari devised a computer program to help determine the treatment protocol for each patient. Every year, he hosts Hebrew University medical students at DMZ “to get a small taste of climatotherapy,” and lectures about his methods at the medical school and internationally.

Harari will not accept patients staying at the Dead Sea for less than two weeks, and he says three or four weeks is more realistic depending on the severity of the condition. In some European countries, healthcare insurance covers nearly all the costs of a full-month stay for qualified patients. 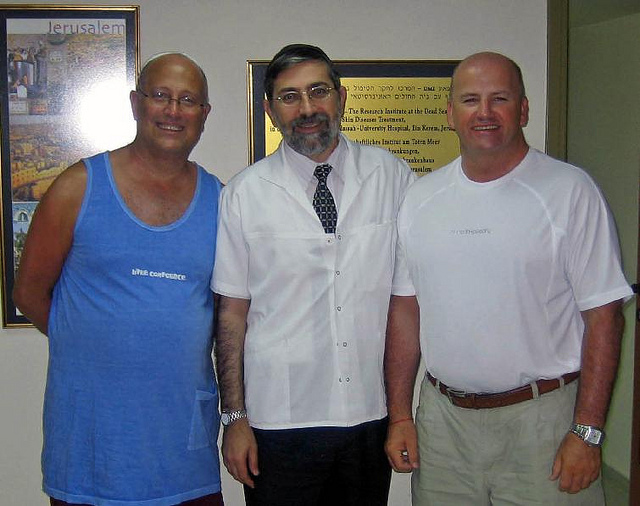 Pini Shani of the Tourism Ministry says the numbers of patients coming to the Dead Sea “are smaller than they should be, because of competition with drug companies giving incentives for pharmaceuticals. But people are missing out on a treatment that might be a miracle.”

The ministry advocates for health insurers to cover treatments, and mounts aggressive consumer campaigns in the main target countries of Germany, Austria, France, the UK and Russia. It sponsors an online ask-the-doctor feature with Harari and another expert from Ben-Gurion University’s Dead Sea & Arava Science Center.

Shani suggests that people planning a three-week stay at the Dead Sea for treatment schedule the trip to take advantage of events in the area, such as the Opera Festival, whose performance at Masada this year was “La Traviata” on June 12-17.