One of the strange things about the coronavirus crisis is that it catapulted us from the middle of wintery February straight into summer season. March and April feel like a faraway, lost-in-quarantine limbo from which we emerged straight into the blazing sun.

To celebrate this odd jump in time and space, here’s the lowdown on Israel’s top 10 beaches for a little armchair travel. And for those in the country, just don’t forget that social distancing is still a thing, sand or not. 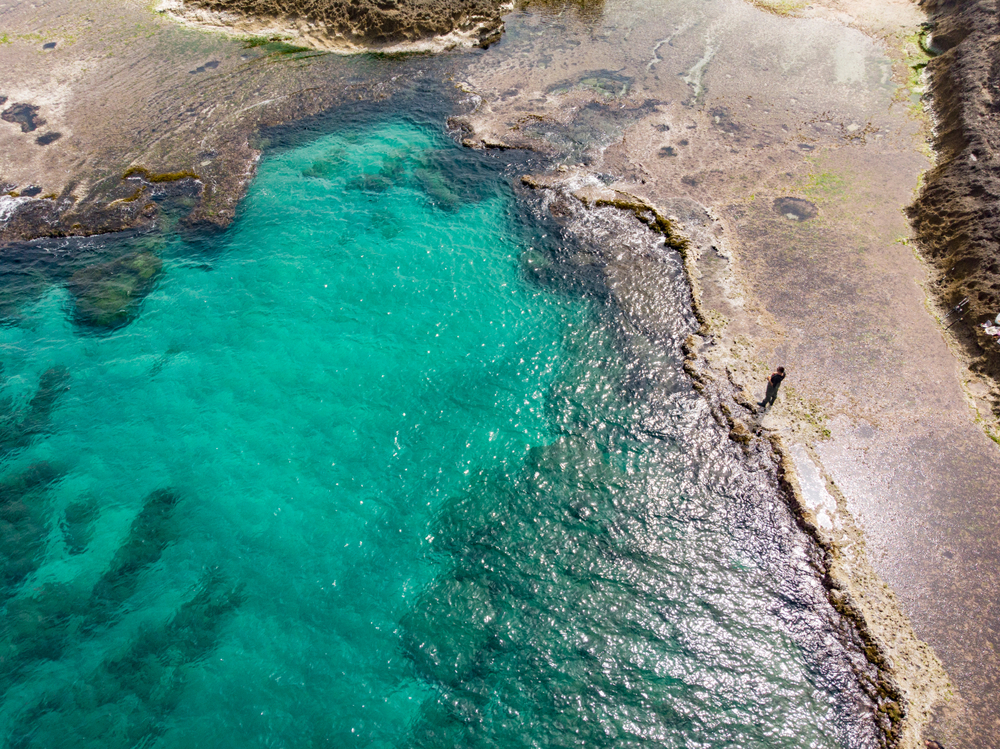 The view from a drone, of Dor Beach Nature Reserve in Israel. Photo by Shutterstock

Quite possibly the most stunning piece of coastline in Israel, Habonim-Dor is the ultimate seaside location. Located only an hour’s drive from Tel Aviv, the area boasts a clear blue sea, vast expanses of sand, a lagoon, loads of little bays and a wonderful, relaxed atmosphere.

As the double-barreled name suggests, Habonim-Dor is made up of two beach strips, but these are pretty much treated as one. You can stroll from one to another, set up camp for a night or check out nearby ruins. Large parts of the beach belong to a nature reserve, so book ahead to ensure you can enter under Covid-19 spacing regulations. 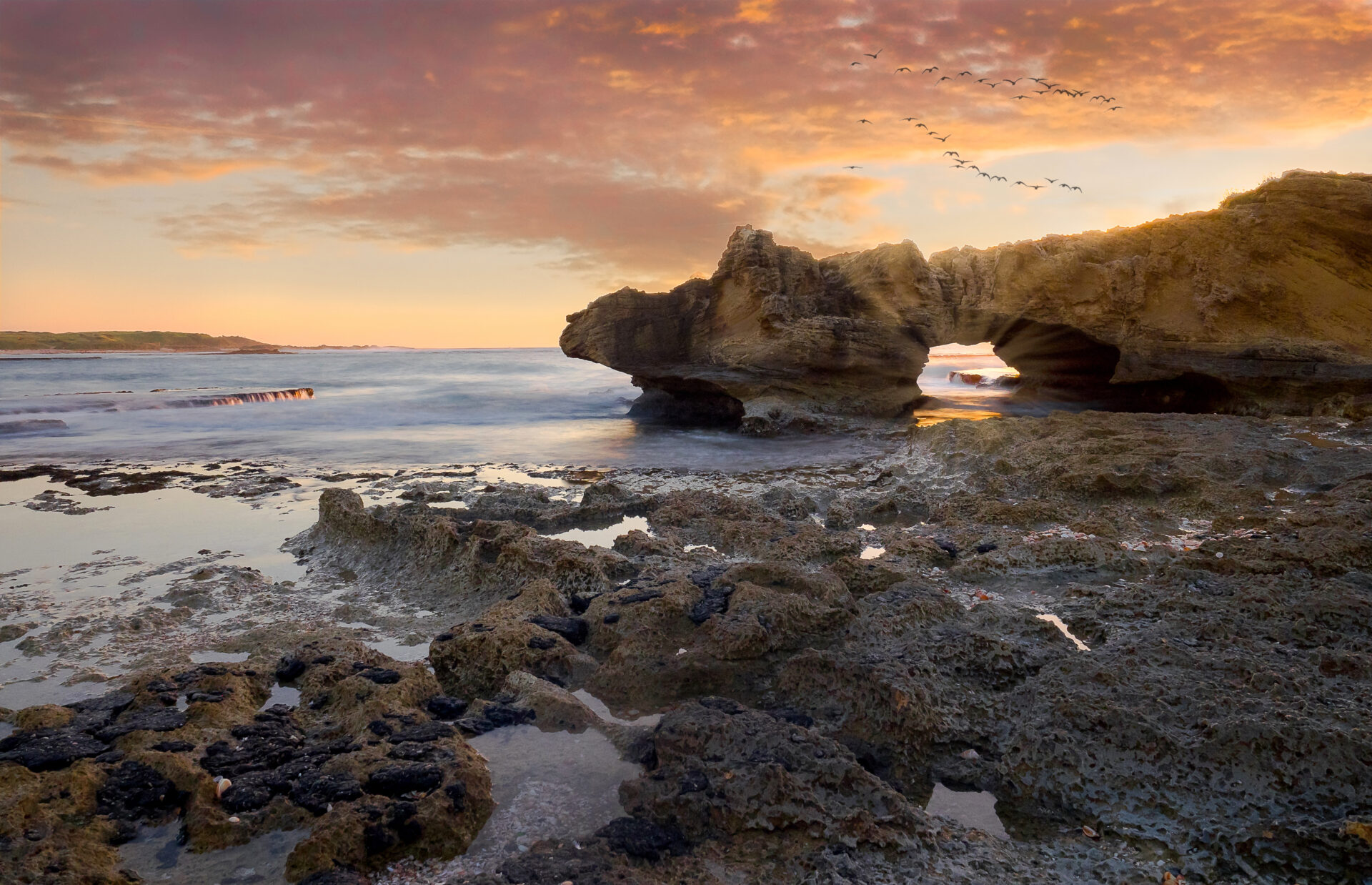 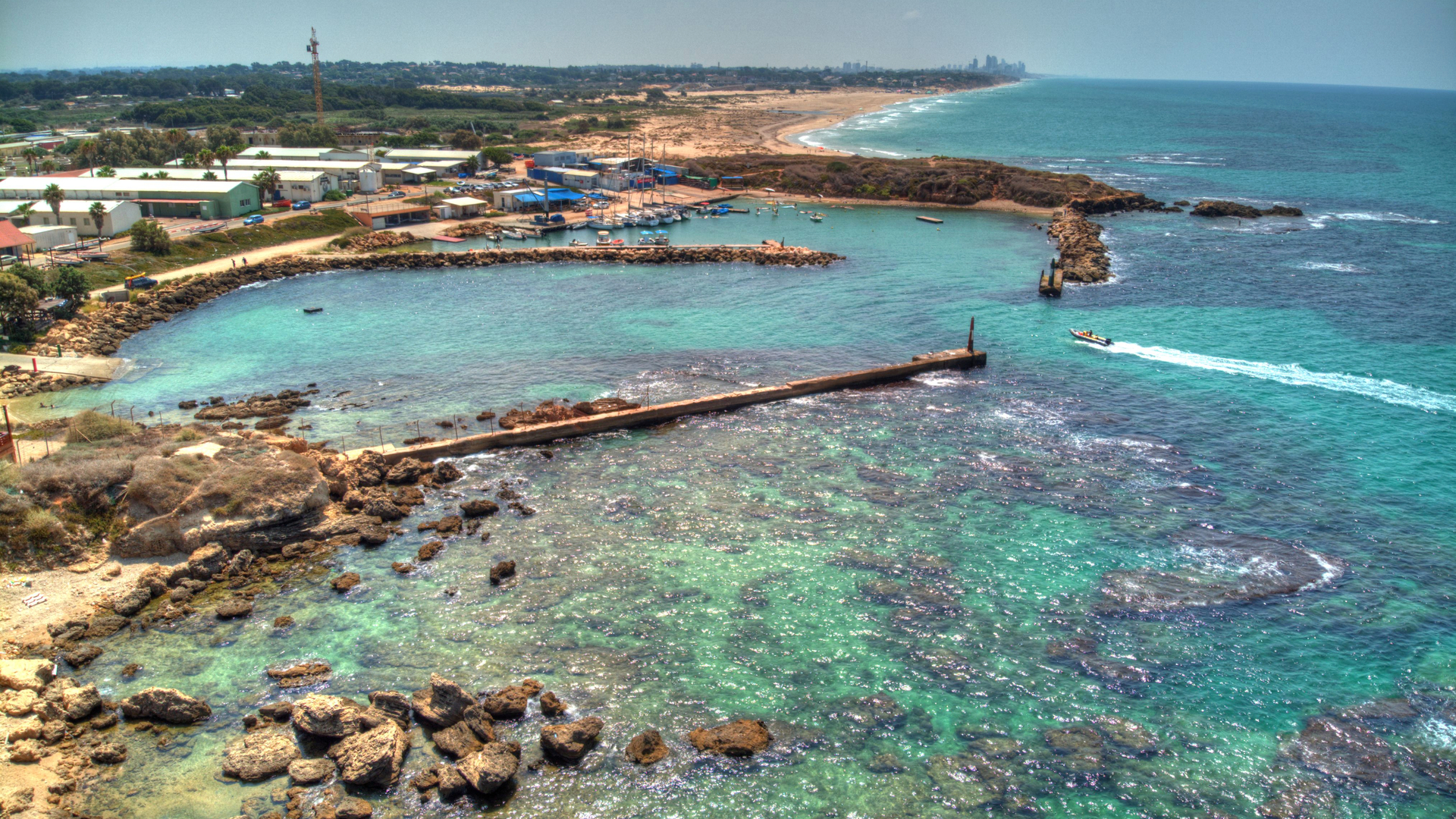 Mikhmoret Beach is many Israelis’ personal favorite, and for good reason. The beach is located just north of Netanya, making it easily accessible, and boasts a calm and relaxing atmosphere more in tune with farther remote spots, but alongside conveniences such as restrooms, changing rooms and a beachfront café.

Our recommendation: Go in the early evening to enjoy a beautiful sunset or on an early weekday morning for a solitary experience. 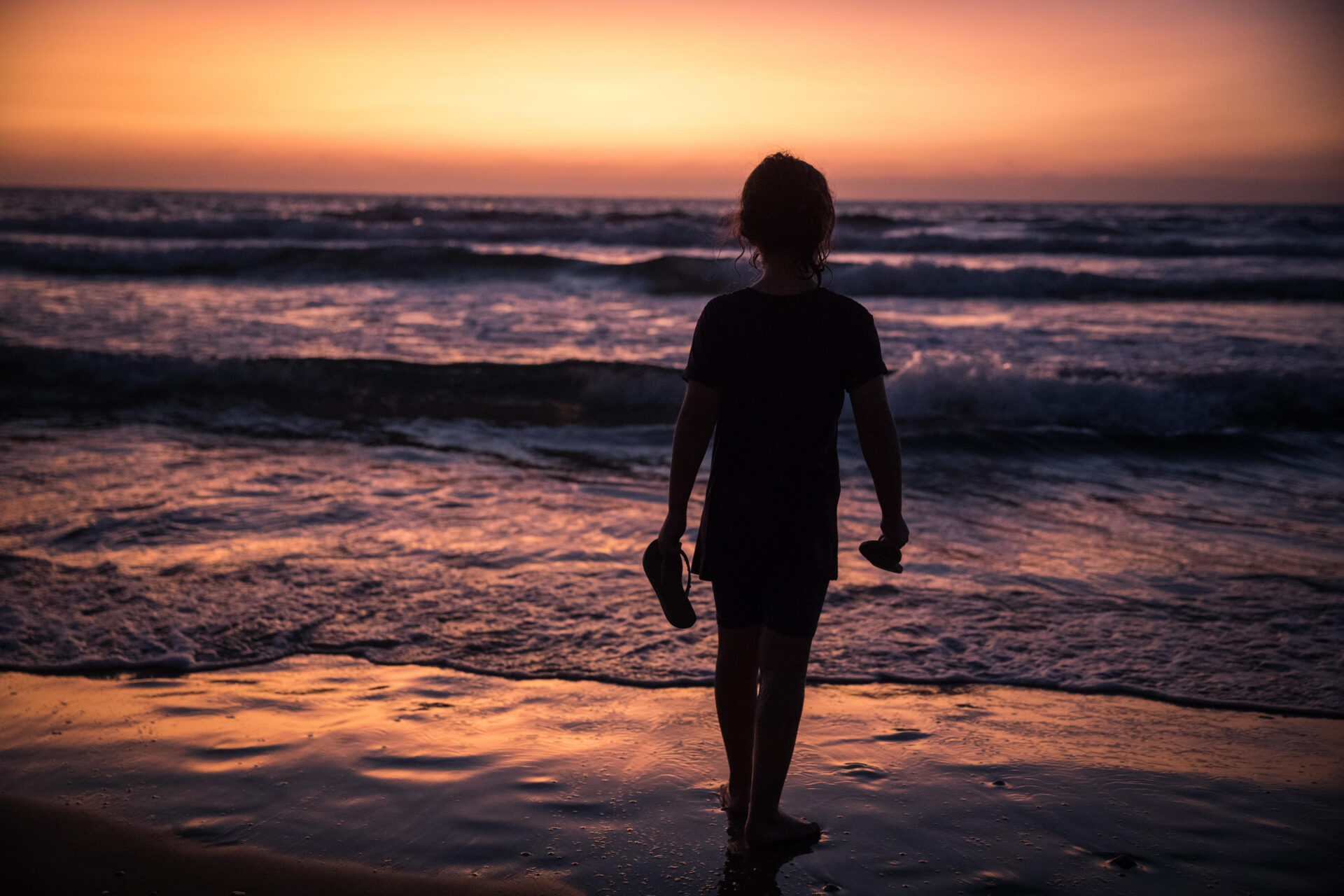 A young boy watches the sunset at Mikhmoret Beach. Photo by Hadas Parush/Flash90 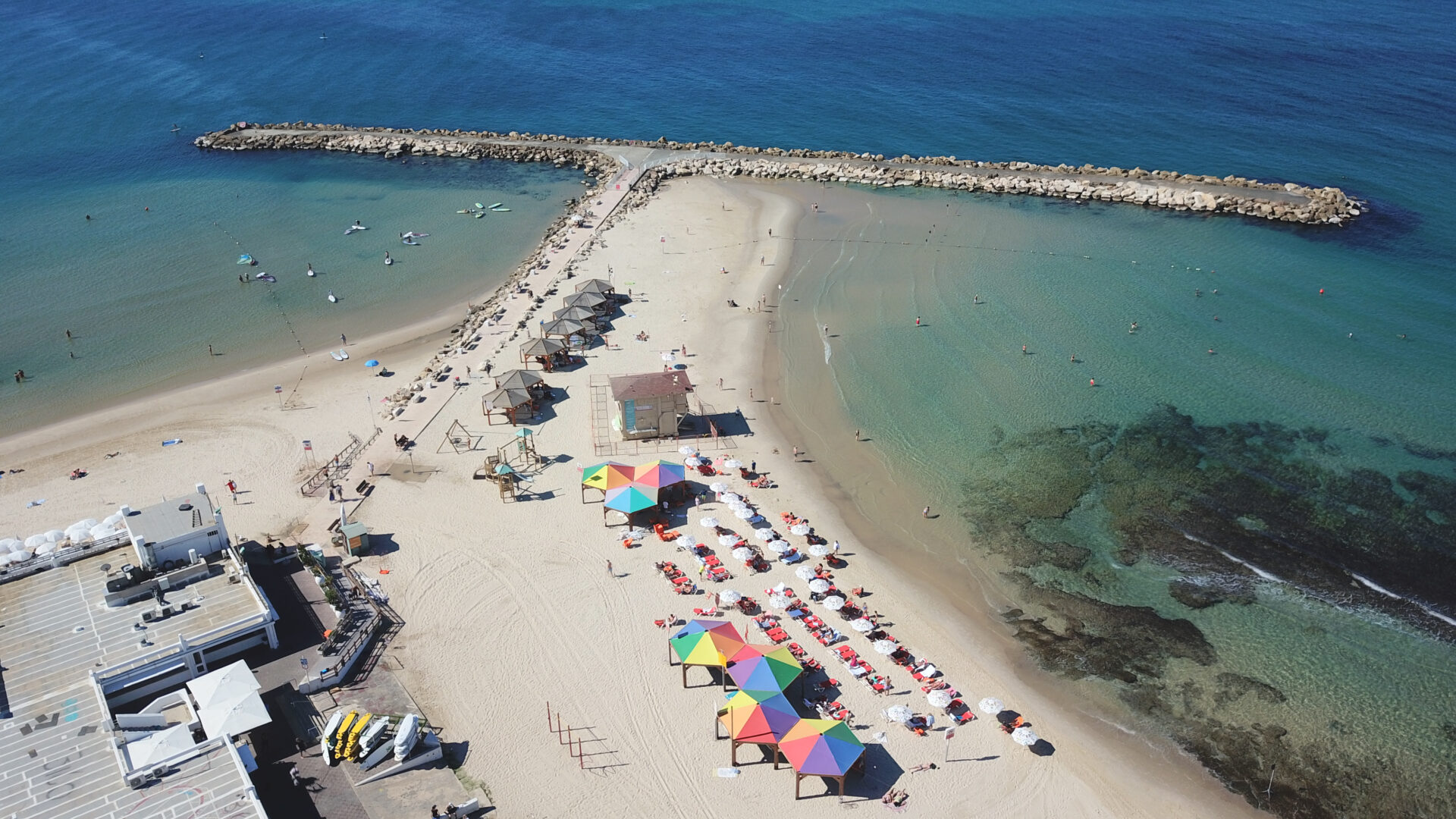 An aerial view of the Hilton Beach in the center of Tel Aviv. Photo by Yuval Cohen Drones/Shutterstock.com

Hilton Beach located right below the Tel Aviv hotel of the same name is the one to hit if you prefer your beach buzzing with people and excitement. A favorite with young people and the LGBT community, it’s also accessible to people with disabilities, complete with an access road to the water and wheelchair-friendly changing rooms. And, since it’s right bang in the center of Tel Aviv, the city’s restaurants and bars are only a short stroll away. 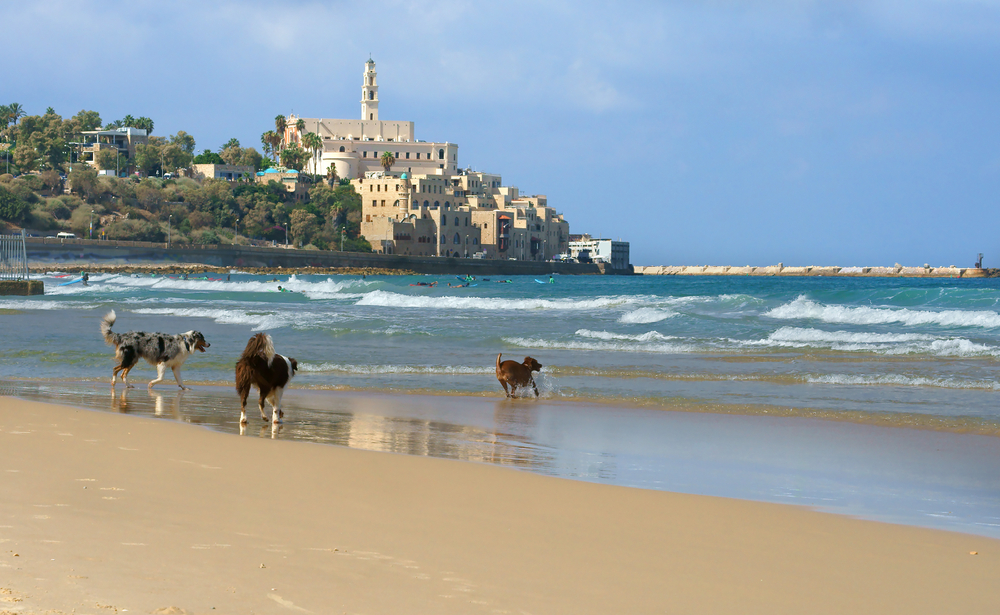 A bit further south, right on the border between Tel Aviv and Jaffa, you’ll find Alma Beach. Once you make your way past grassy lawns that seem to host 24-hour barbecues, you’ll reach a modest strip of sand. But don’t be fooled by appearances. Populated by young and older locals looking for a bit of peace, it’s a little haven among the hustle and bustle of the city.

Just bear in mind that it’s also populated by plenty of dogs, since they are permitted without a leash here. If cute puppies jumping in and out of the water is your thing, this is the place for you. 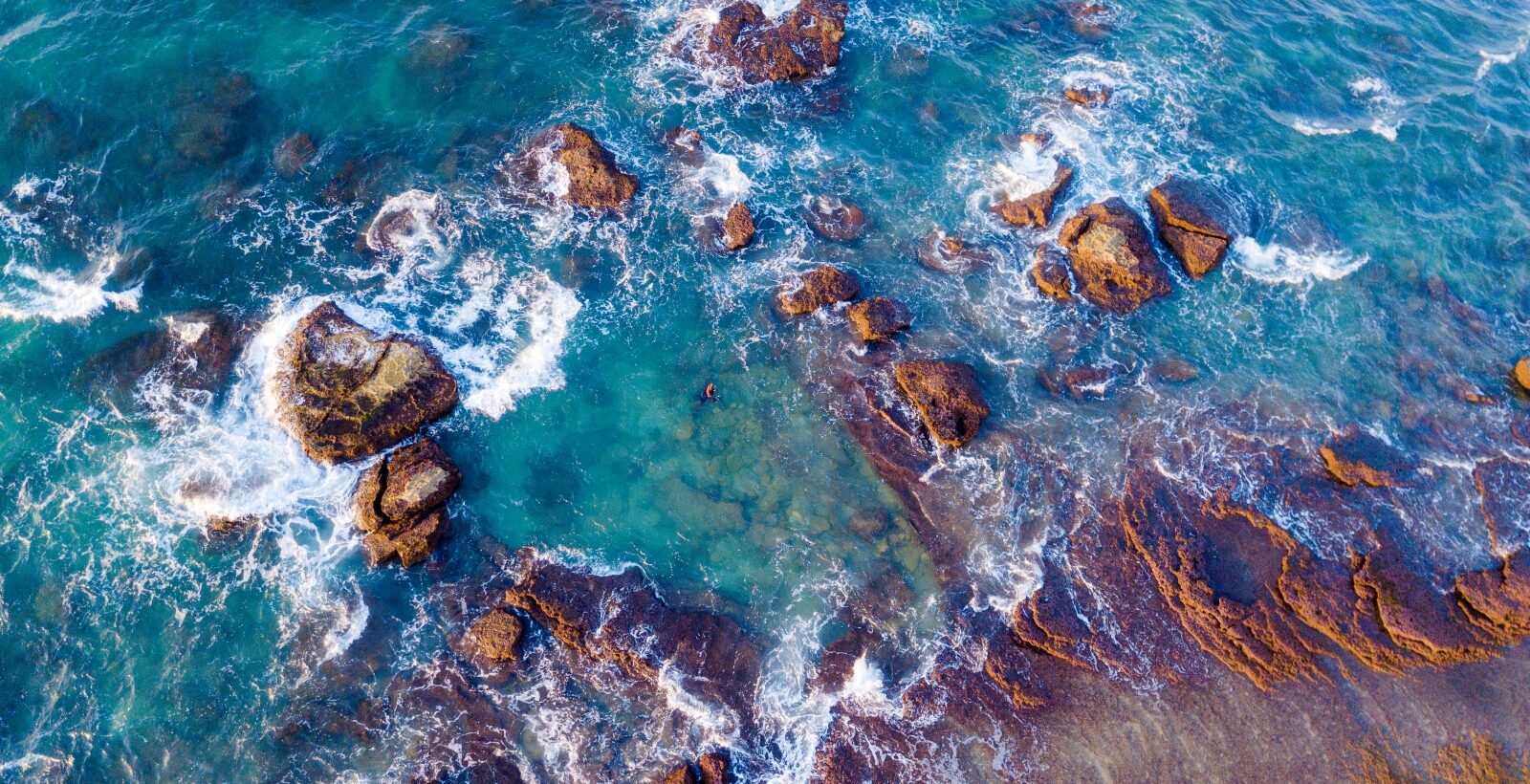 Above the sea at Palmachim beach. Photo by Eli Passi

Don’t come anywhere near Palmachim Beach on a Saturday when it’s absolutely packed, but do make your way there on other days to experience one of the loveliest beaches in the country. So lovely, in fact, that large parts of it are a nature reserve. It’s one of the last remaining beaches still in its natural state, complete with wandering sand dunes, a limestone ridge and endangered sea turtles, making it a unique and super-Israeli beach experience. 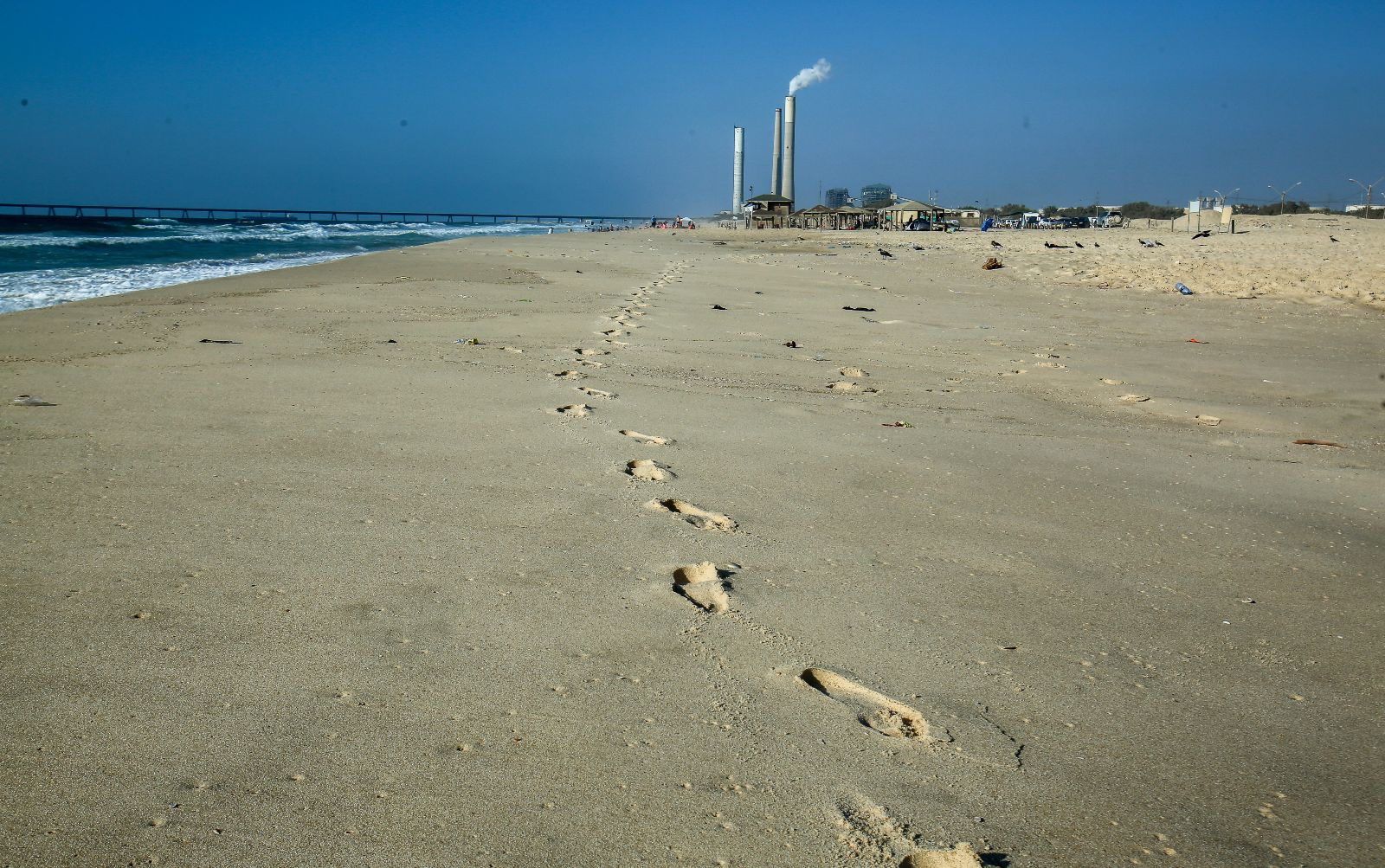 Footprints in the sand at Zikim Beach in southern Israel. Photo by Edi Israel/Flash90

Israel’s southernmost beach along the Mediterranean, Zikim is a remote, otherworldly piece of sand that’s bordered by an imposing power station on the one side and the Gaza Strip on the other. It’s frequented by locals, quiet beachgoers and the occasional mass of young people spending the night there, as well as by plenty of animals that leave their telltale footprints in the sand behind them. Highly recommended. 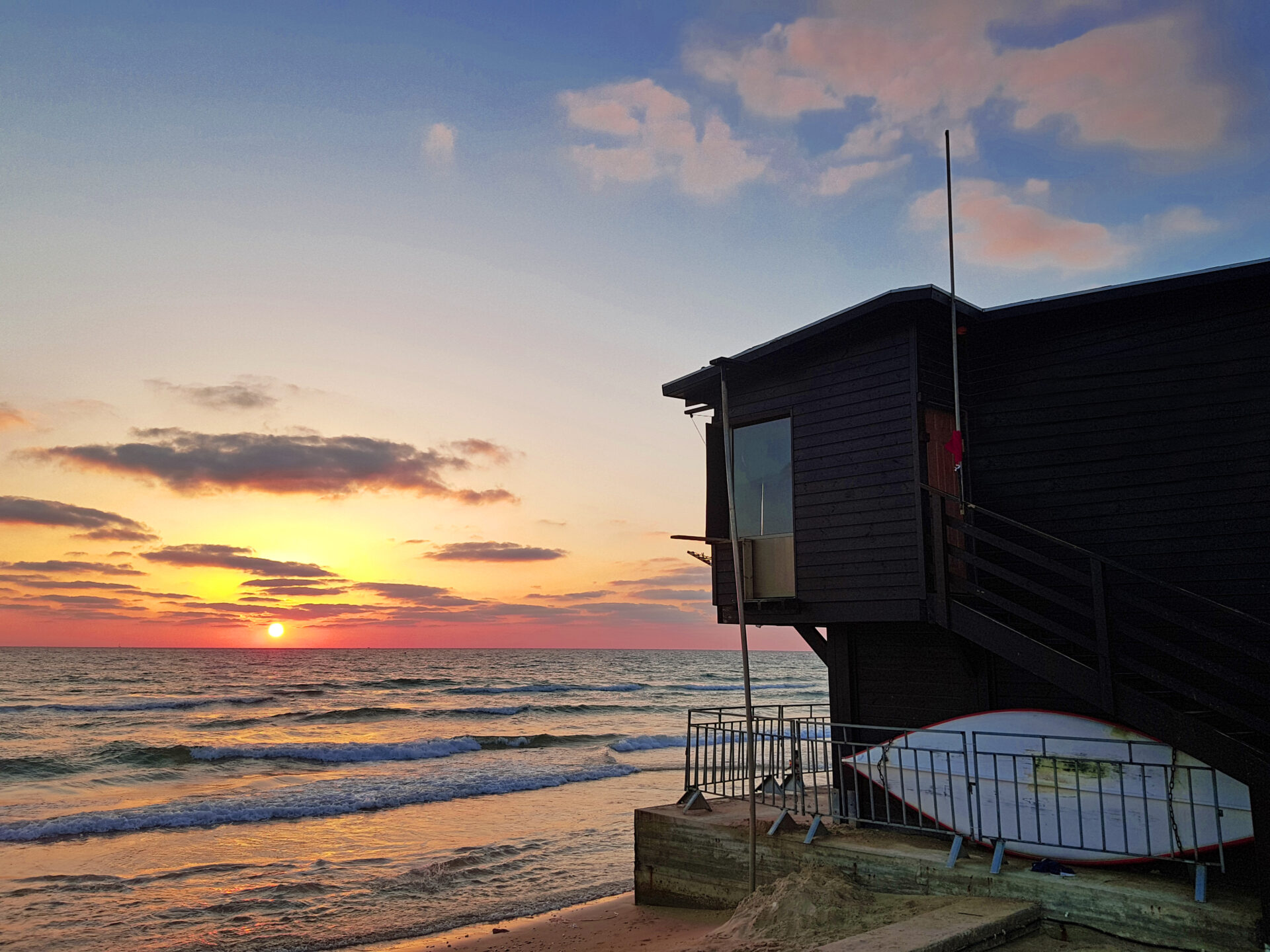 The sun sets over Dado Beach in Haifa in northern Israel. Photo by The World in HDR/Shutterstock.com

A quick detour up north before we leave the Mediterranean: Dado Beach is the most popular beach in Haifa. It boasts a lengthy promenade, restaurants, cafés and even an amphitheater, making it a perfect urban beach. It’s also accessible to people with disabilities, offering an access road to the water and wheelchair-friendly changing rooms and bathrooms. 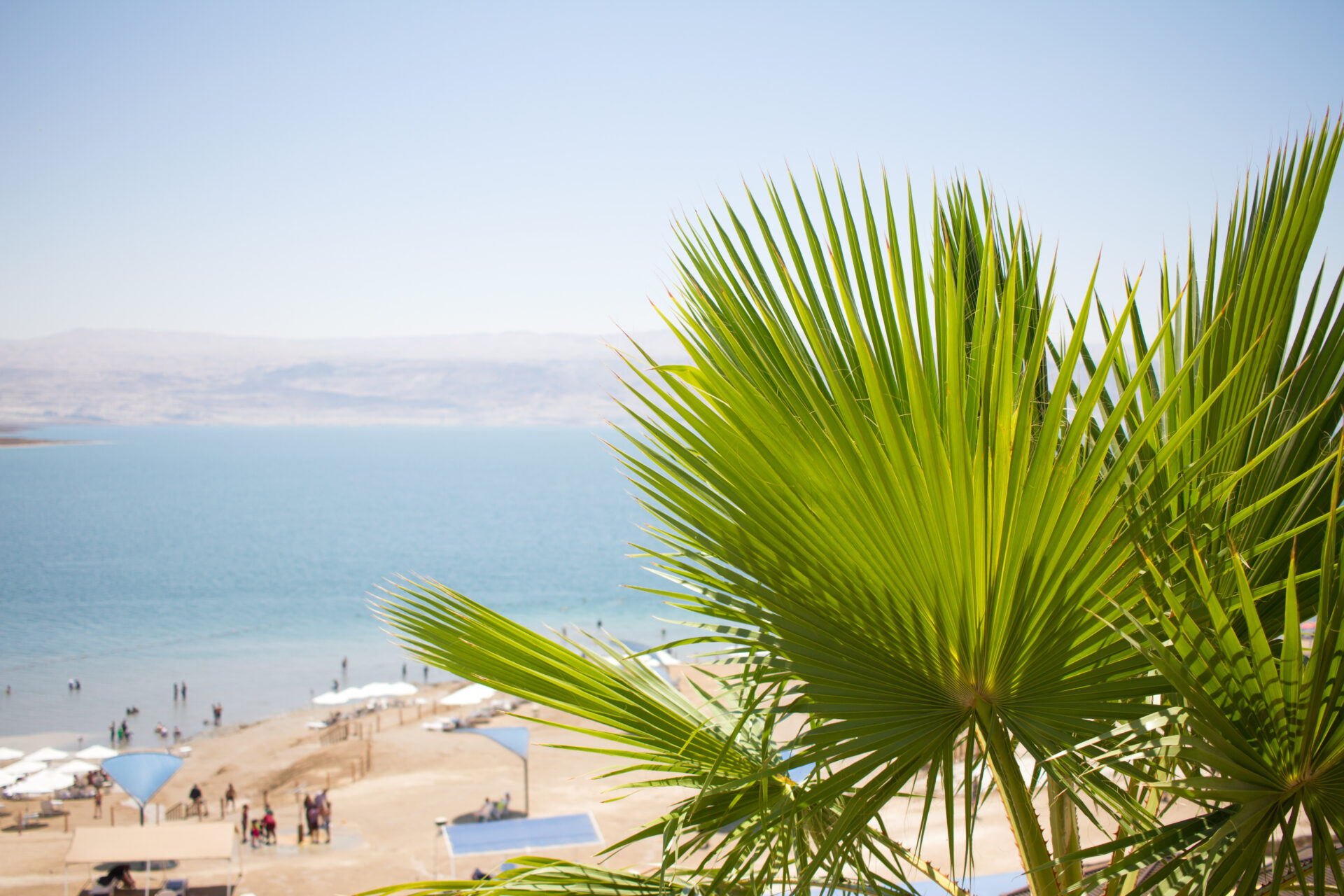 Get ready to float. Kalia Beach on the Dead Sea. Photo by Shutterstock

Moving on to the Dead Sea, Kalia Beach is a personal favorite. Located on the part of the Dead Sea that’s nearest to Jerusalem, the large beach is a favorite with Jerusalemites out for the day in the lowest point on Earth.

While the place offers a restaurant and a Dead Sea cosmetics store, our recommendation would be to whizz past them straight to the water and indulge in some plain, old-fashioned mud slathering and floating. The views from the beach are absolutely gorgeous and the facilities convenient, making it a wonderful, one-of-a-kind spot.

Now making our way down to the Red Sea city of Eilat, let us introduce Mosh Beach. And if the name Mosh rings a bell, you’re not mistaken: the beach belongs to Israeli singer Mosh Ben-Ari.

The Sinai-style beach is all about lounging around, enjoying food and some drinks to the sounds of reggae music and feeling far, far away. Which is just as well, considering the place is right near the border with Egypt. Just bear in mind that there’s no lifeguard service, so perhaps stick to all the amenities the beach itself has to offer. 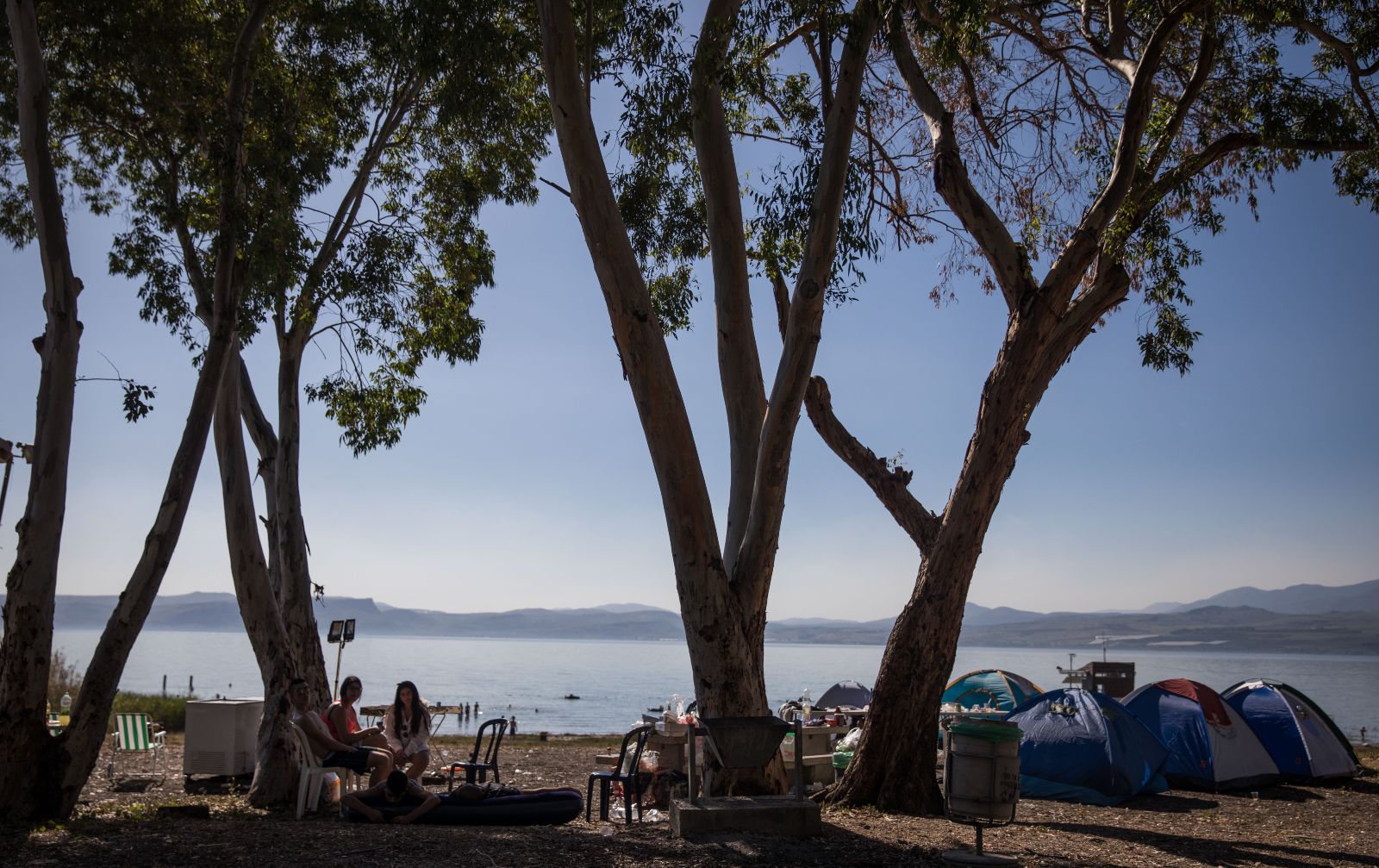 Set up camp on the shores of the Sea of Galilee for an ultimately Israeli experience. Photo by Hadas Parush/Flash90

This one’s a bit of a cheat, since Gofra Beach is located on the shores of the Sea of Galilee — which is not, as its name would suggest, a sea, but rather a lake. Still, no Israeli summer would be complete without a sojourn to Lake Kinneret and its pebbly, tree-lined beaches.

Gofra is situated on the eastern side of the lake, across the water from Tiberias, and is a perfect location for setting up camp and enjoying a day or two of fire cooking, endless backgammon games, reading and dipping in the warm water. During the summer vacation it gets a little busy, so try going on a weekday. Bliss.