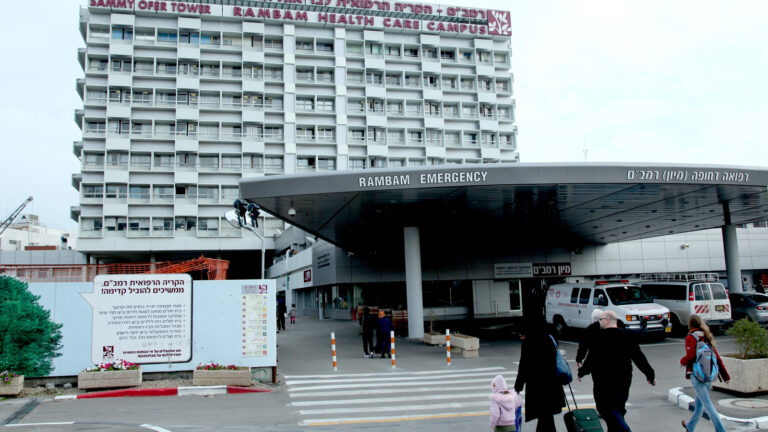 The Rambam Medical Center in Haifa. Photo by Moshe Shai/Flash90

The young patient has made headlines in Israel this week because of the audacious and clandestine mission undertaken by Israeli health professionals to save her life.

Like almost all Syrians to have been treated in Israel since the outbreak of the Syrian civil war, this young girl and her mother made their way to the Syrian-Israeli border to seek medical help, a Rambam spokesperson tells ISRAEL21c.

The girl was caught in a firefight between rival militias, according to a Channel 10 report.

Israel has a policy to treat in its hospitals any wounded Syrians who reached its border seeking help even though the countries are considered enemies.

Rambam doctors discovered that their young patient, though suffering light wounds,  also had cancer. And they were not about to let her be discharged without proper treatment.

The doctors set in motion a search for a suitable bone-marrow donor – and found a match with one of the girl’s relatives, who lives in a nearby country designated as an enemy state. Under Israeli law, residents of enemy states are not allowed to enter the country without special permission.

According to a Channel 10 Hebrew news report, the Haifa doctors turned to Israel’s Secret Service to track down the relative and secure his entry into Israel. The mission was successful and the relative arrived in Haifa earlier this week. The girl, her mother and the donor will stay at the hospital for one month, says the Rambam spokesperson. Details about the girl’s identity and her donor’s home country are classified.

Another patient from Syria, suffering severe burns, currently is being treated at the Haifa medical facility, the spokesperson adds.

Since February 2013, when Israel opened its border to wounded Syrians, the Rambam Health Care Campus has treated more than 120 Syrian patients. Other hospitals in Israel’s North —  Ziv Medical Center in Tzfat (Safed), Medical Center of the Galilee in Nahariya, Poriah Hospital near Tiberias – have treated some 1,000 Syrians willing to trust the so-called enemy (Israel) with their lives.

Some of the outstanding humanitarian cases in the last three years include the 12-year-old boy who rode a donkey from Damascus to Israel to receive medical aid, a Syrian doctor’s handwritten note to his Israeli counterparts that was attached to a patient’s clothing, a Syrian opposition chief thanking Israeli doctors for medical aid and the pioneering titanium jaw Israeli doctors created for a civil war victim.

Most patients return to Syria after being discharged from Israeli hospitals. The Rambam spokesperson tells ISRAEL21c that the young girl and her mother will make a decision where to go following the outcome of the bone-marrow treatments.