Israeli doctors at Ziv hospital in Safed (Tsfat) were surprised to find a handwritten note in Arabic, addressed to them, attached to the clothing of a badly wounded Syrian man brought to Israel for lifesaving treatment.

The polite letter opened with “Hello distinguished surgeon” and went on to detail previous medical care the patient had received in Syria days earlier. The unnamed Syrian physician understood that he could not provide the required treatment and asked his Israeli counterparts to save the life of the 28-year-old patient. 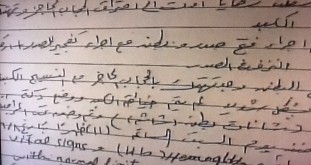 A Syrian doctor's note found attached to a patient. (photo credit: Channel 2 screenshot)
The patient suffered from gunshot wounds to his chest and torso and shrapnel damage to his diaphragm and liver, according to a report by Channel 10. He arrived in Israel in critical condition and after surgery was upgraded to stable condition.

The Syrian doctor explained in his letter what treatment the man had already received and thanked the Israelis in advance, saying he knew they would do everything possible to save the life of the young man.

Dr. Amram Hadary, director of the trauma unit at Ziv hospital, commended the Syrian physician on his initial treatment, saying “it seems that the [Syrian] operation saved his life.”

Although Syria is officially considered an enemy state, Israel allows Syrians in need of critical care to cross the border for “humanitarian reasons.” To date, some 20 Syrians have received treatment at Ziv hospital, the nearest major Israeli medical center to the Syrian border.