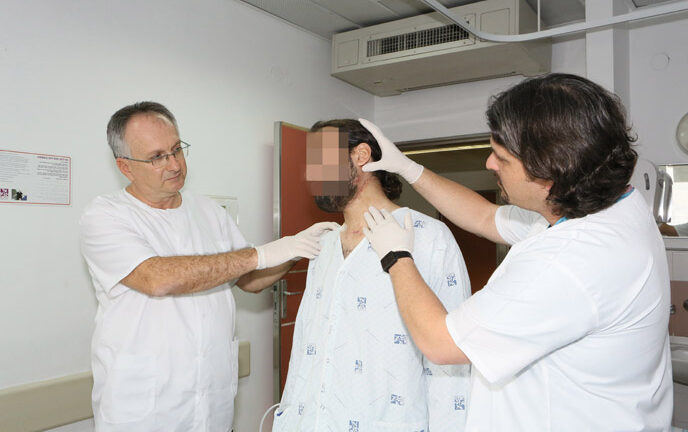 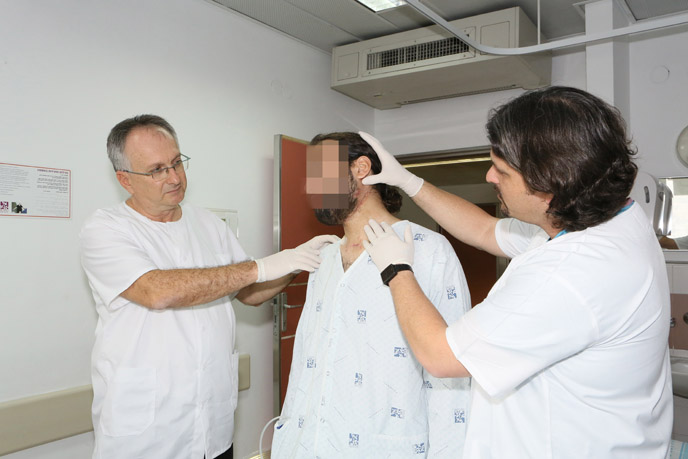 A new groundbreaking procedure was used by doctors at Rambam Health Care Campus to implant a titanium jawbone in a Syrian shooting victim, who had come to Israel for medical treatment after a bullet demolished his lower jaw.

The 23-year-old Syrian man arrived at Rambam in critical condition after a rifle bullet had completely destroyed his lower jaw, rendering him unable to speak or eat.

Israeli doctors outfitted him with a custom-made jaw printed on titanium using 3D CT and then implanted it into the victim’s face.

Professor Adi Rachmiel, director of Rambam’s Department of Oral and Maxillofacial Surgery, performed the ground-breaking operation with Dr. Yoav Leiser, who recently returned from training in Germany, where he specialized in restoring eye sockets, jaws, and cheek bones. One day after surgery, the patient was eating and speaking.

“We succeeded in returning his human quality,” Leiser said of the patient, whose face had been torn, jaw smashed, and bottom teeth blown out.

In the procedure, called a Patient Specific Implant (PSI), doctors created a jaw perfectly suited to the patient. While such procedures previously demanded the connection of many plates, PSI requires only one individualized plate, serving as a custom-made “replacement part.”

To compensate for the fact that the patient had no medical records, doctors relied on statistical models.

UNCOVER ISRAEL - Get the ISRAEL21c
Weekly Edition free by email
Sign Up Now!
Bring Israel's story to life.
Millions of people around the world rely on us to gain a deeper understanding of Israel. We are the trusted source for original content you won't find anywhere else.
You can make a difference. Donate today to support journalism that brings Israel’s story alive.
SUPPORT ISRAEL21c
Read more on:   News, Rambam, Syria, Israeli doctors