She approached him gently, introduced herself as a clinical psychologist from Israel’s United Hatzalah Psychotrauma and Crisis Response Unit (PCRU), and asked if she could speak to him.

Paul told Slater that he and his wife had sold everything and moved to Fort Myers from Missouri two weeks prior to the hurricane.

Now, the house in which they’d invested all their money was demolished. A small plastic bag held everything he owned.

“He kept repeating, ‘I lost everything, I couldn’t save anything.’ He had no job, no home, no possessions,” Slater tells ISRAEL21c.

This was the kind of intense personal crisis that Slater and her teammates from Israel are trained to alleviate with short but effective interventions.

They flew from Israel on Saturday night, October 1, as soon as it was clear that Hurricane Ian was wreaking extraordinary death and destruction. “It was touted as a once-in-500-years hurricane that even Americans and Floridians found overwhelming,” explains Slater.

“My experience in assisting after the building collapse in Surfside [in June 2021] taught me that even though the Americans are quite capable of handling disasters on their own, our trauma team brings different techniques, some of which were created in Israel on the basis of need, and we have something to add.”

Welcomed once again by the Floridian Red Cross volunteers, Slater and a handful of other Israeli psychologists and social workers on her team combed two shelters looking for people who appeared especially lost, helpless, anxious or isolated. 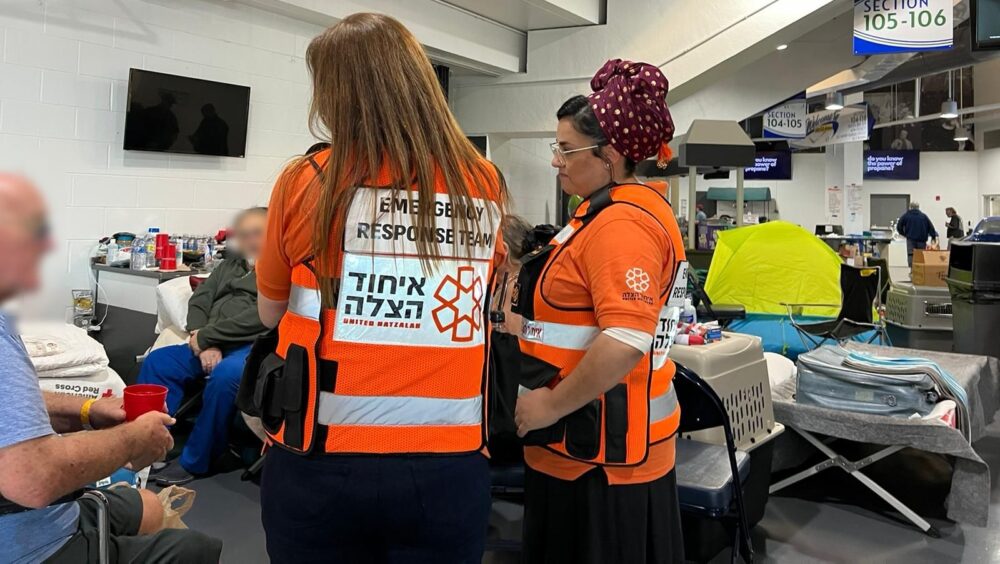 “We do not do therapy; we do a quick intervention of maybe 15 minutes per person,” Slater explained.

The Israeli counselors always ask permission to approach because, she says, “there is so little in their control. This gives them an opportunity to control whether they want to interact with us.”

‘Who sleeps in this bed?’

When Paul indicated his assent and repeated his mantra, Slater pointed to one of the beds he was standing between and asked, “Paul, who sleeps in this bed?”

“My wife,” he replied, and then repeated, “But I couldn’t save anything.”

Slater asked again who sleeps in this bed. And then Paul understood: He had indeed saved something – the woman most important to him. With that realization, his tears began to flow.

When he’d composed himself, Slater asked what was overwhelming him and he gave her a list of major concerns. She advised him to choose the most urgent problem to focus on first, to the exclusion of all others.

Paul decided that his priority was finding a home to rent. Slater said, “Just focus on that for now and after that you can worry about finding a job. When those intrusive thoughts come in about a job and possessions, refocus on one thing instead of 10 things.”

Immediately, she saw the tension leave his face and body. Paul thanked her, and she moved on.

“One of the protocols we use addresses the issue of resilience and helping people to rewrite their narrative to look for points of resilience,” Slater explains.

“Paul was very focused on having been ineffective and inefficient in saving what was important to him, and I was looking for what he did succeed at to reframe that for him and give him a different perspective.”

This is one of the trauma intervention protocols created in Israel. “We have six or seven protocols depending on the mental state of the person and how soon after the event we arrive,” says Slater. “We are also certified in Red Cross Psychological First Aid.” 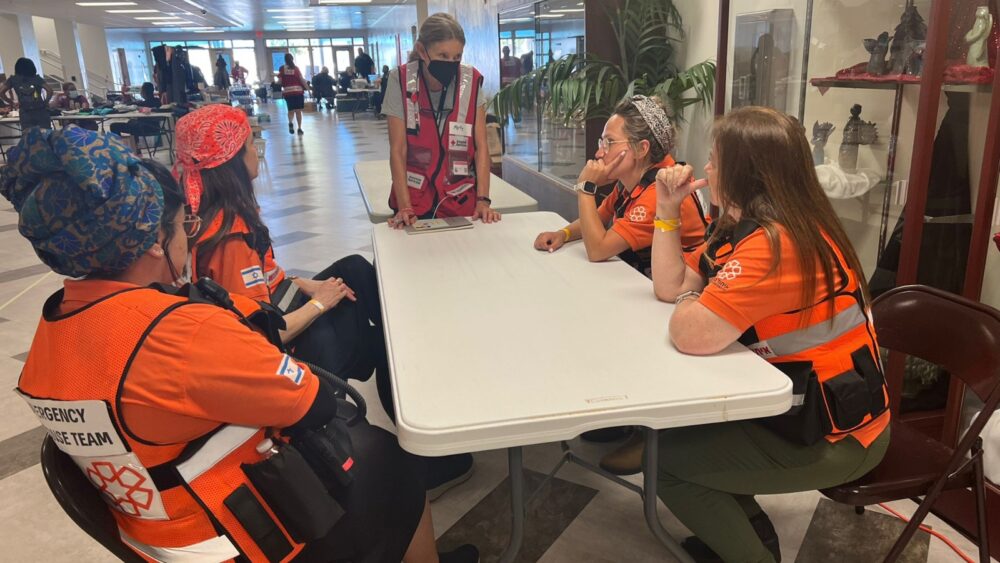 Members of the Psychotrauma and Crisis Response Unit coordinating their efforts with a Red Cross worker in Fort Myers. Photo courtesy of United Hatzalah

In one Red Cross shelter, Slater blew bubbles with a three-year-old boy and soon spotted the child’s mother, “Charlene,” sitting on an air mattress.

Giving Slater permission to sit and speak with her, Charlene shared that she is a single mom of three small children. She’d recently been released from prison and had suffered two major losses: the grandmother of the three-year-old boy, who’d been caring for him, had died. Her best friend also died. Charlene hadn’t had time to find a job before the hurricane took away whatever little she’d managed to get together.

“I asked what helped her negotiate all these challenges. She pointed up and said, ‘God.’ I asked if she prays, and she told me that she speaks to God every day,” Slater recalls.

Slater asked Charlene if she and Dr. Einat Kauffman, clinical director of the PCRU, could pray with her for two minutes. Charlene agreed.

“Afterward, I told her that I had prayed for God to give her resilience to take each day at a time and keep her family together. Charlene said she had prayed for gratitude that she and her kids are under one roof, and have their health, and that she’s not incarcerated.”

Charlene was crying tears of relief when the Israeli women left her, and she called after them, “God bless Israel!”

The family that wouldn’t leave

One the eve of Yom Kippur, Kauffman and her team were called over by a group of firefighters on Fort Myers Beach to help them with a family that was refusing to leave their condo, which had been deemed unfit for human occupancy due to the storm.

The couple and their three children told the firefighters that they hadn’t left their apartment during the Covid-19 pandemic, and they were still too afraid of the virus to leave now – despite having no food, gas, electricity or clean water. 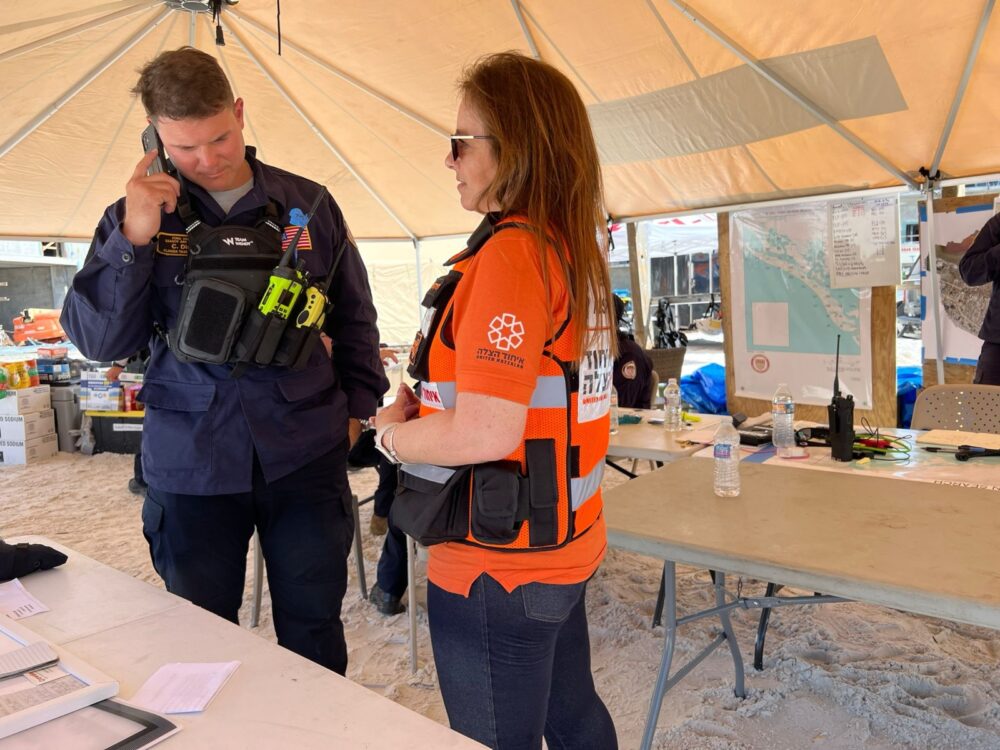 Kauffman approached and helped them weigh the risks of each worst-case scenario: contracting the disease in its current form, which for most is not lethal, or staying in an apartment in an unsafe building that might collapse.

“I told them that members of our very own team had responded to the Surfside collapse and explained to them a bit about what happens when a building collapses. I spoke to the wife and mother, and she understood me and I understood her, and I tried to allay her fears. She said she would discuss the issue with her husband and children,” Kauffman says.

“A few hours later, the firefighters who had requested our help sent me a photo of the family after they had exited the building and the firefighters were going to take them to one of the nearby shelters,” she says.

“The important part to remember is that in the case of the evacuees, these are all stories of survival. These people went through some of the most trying experiences in life, simply to survive when their world came crashing down. They are still struggling, and I am glad that I was able to be there to help.”

Home in the nick of time

Hurricanes never hit at convenient times, but Ian was especially challenging for the Israeli professionals because of its proximity to the Jewish holidays of Yom Kippur and Sukkot.

Each of the seven volunteers made the decision to leave their families at a time when families normally gather.

In fact, Slater barely made it home before nightfall on October 9, the eve of Sukkot. Three Arab members of United Hatzalah came to the airport to meet the volunteers and drive them home just in time.

“I have five grown kids and nine grandchildren, and my husband is incredibly supportive of my going out on these missions,” Slater says. “My only concern was leaving my clients vulnerable.”

“We go because people are in need of help and we can’t sit idly by when this level of disaster strikes,” Maisel said. 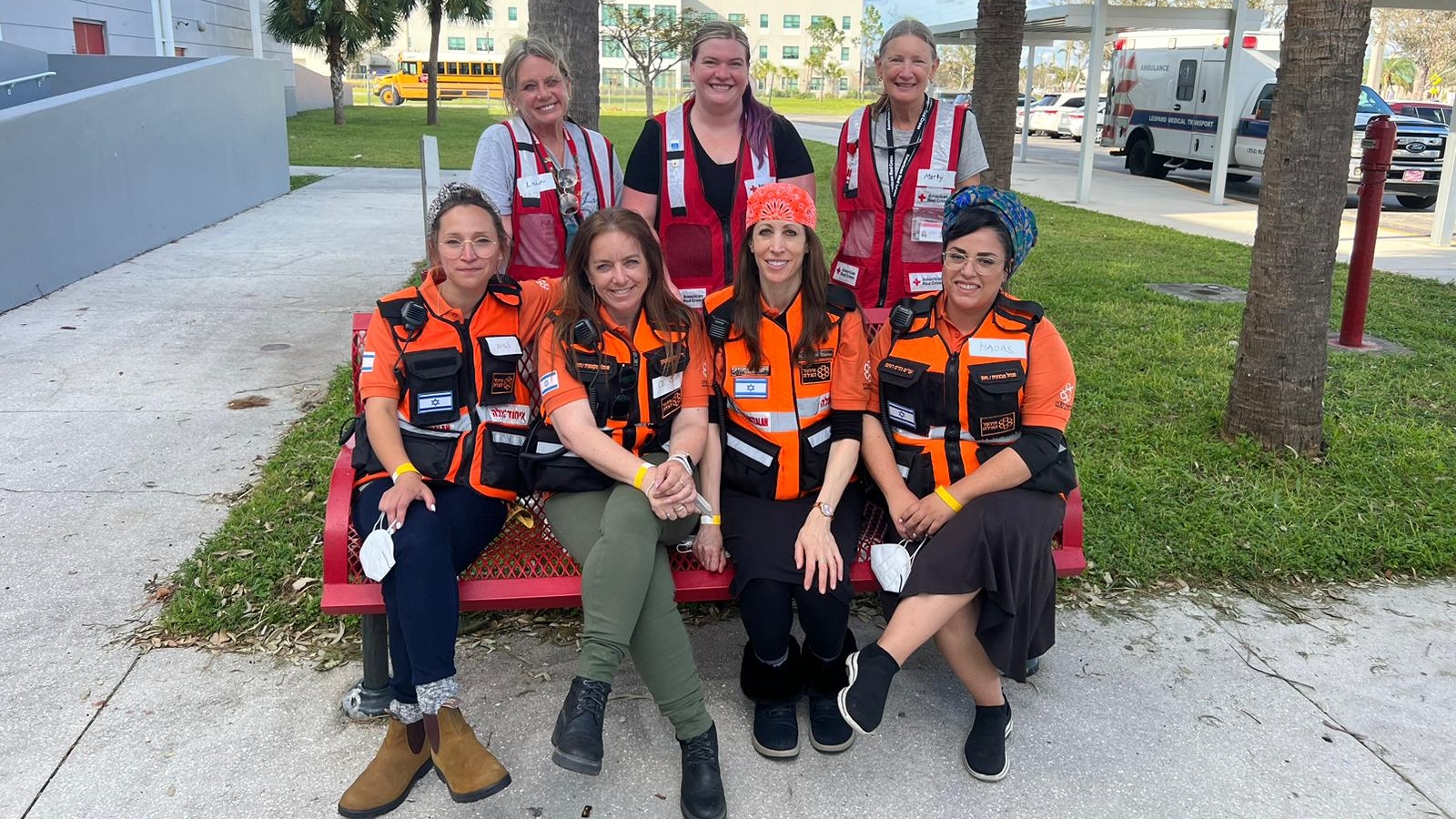 “Over the past six years, the PCRU members have become experts in the field of providing psychological first aid and emotional stabilization in the field following any type of disaster, big or small. That is why we keep sending them out when these things take place… They are a force multiplier of psychological first aid, and that has been proven time and again in large-scale disaster scenarios.”