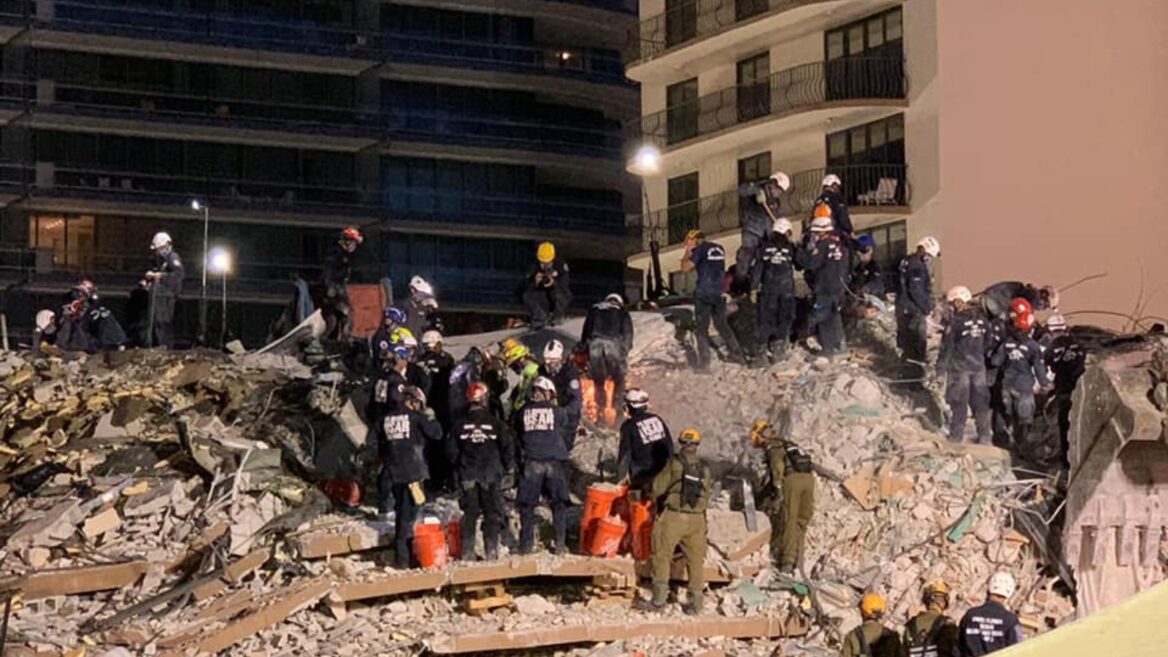 “I saw in the news that you were coming from Israel for us, and I was waiting for you,” said a tearful young woman in Surfside, Florida, to members of the Psychotrauma and Crisis Response Unit  (PCRU) from United Hatzalah of Israel.

“People kept coming up to us and saying how happy they were that we arrived,” said Batya Jaffe, who was on the scene with her therapy dog, Lucy.

They were part of the six-person PCRU team that landed in Miami Sunday morning, along with a search-and-rescue team from the Israel Defense Forces’ Home Front Command, following the collapse of the 12-story Champlain Towers South residential building last Thursday. 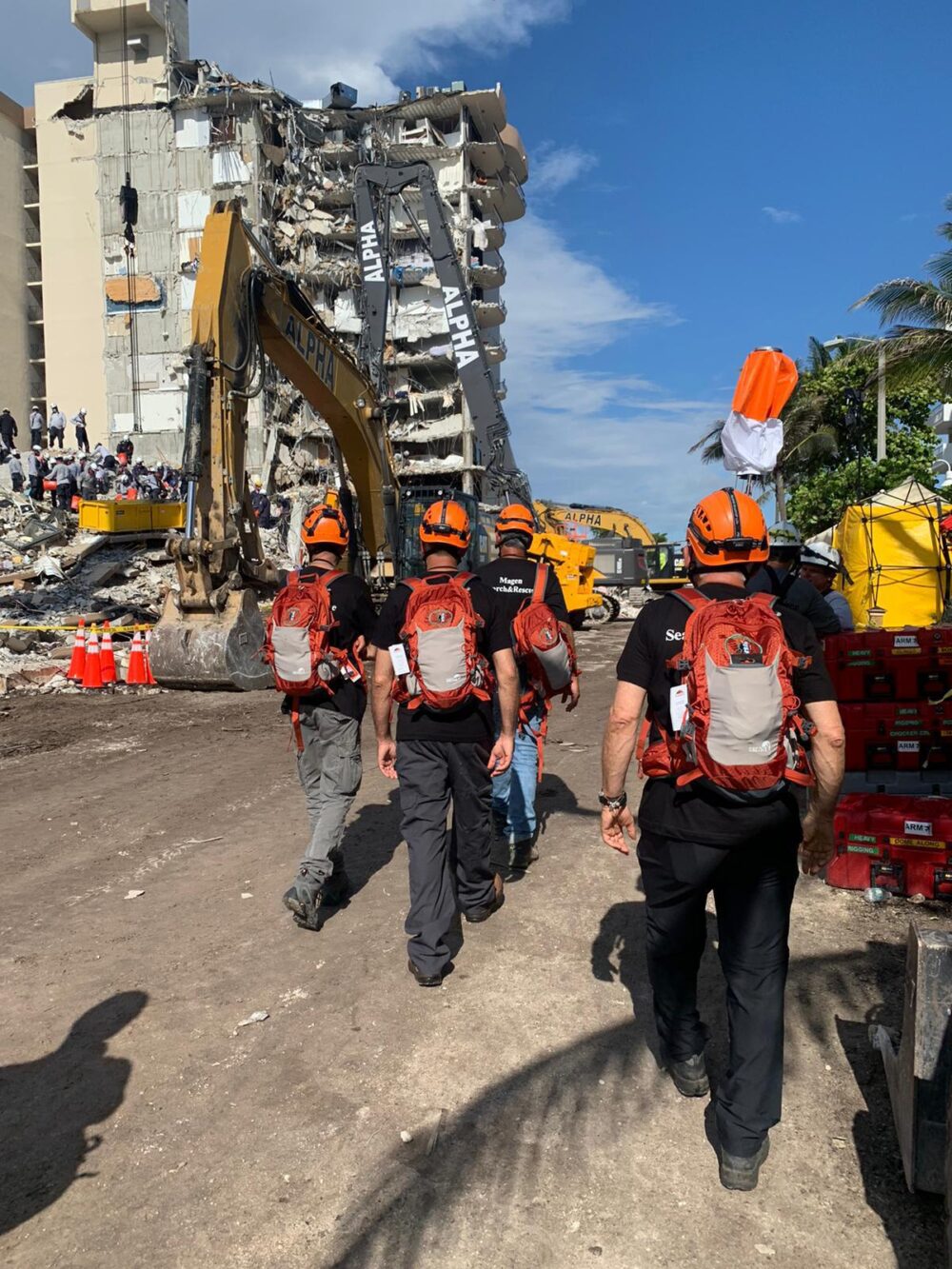 The death toll from the disaster stands at 11 as of this writing, while 150 people remain missing and 136 have been accounted for. Fires, flooding and falling debris have hampered the search in the rubble created by 55 of the building’s 130 apartments destroyed in the collapse.

On Monday, 10 experts in a tunneling method of tracing trapped people came to Surfside from the voluntary Magen search-and-rescue unit of Israel’s SmartAID organization.

United Hatzalah’s PCRU team met with local community leaders and then joined a Zoom session with representatives from various relief and communal organizations in the area to create an organized and unified plan of action.

They then set up operations at the Grand Beach Hotel, helping displaced Champlain Towers residents, as well as the families of those who are missing, to process the tragedy emotionally. 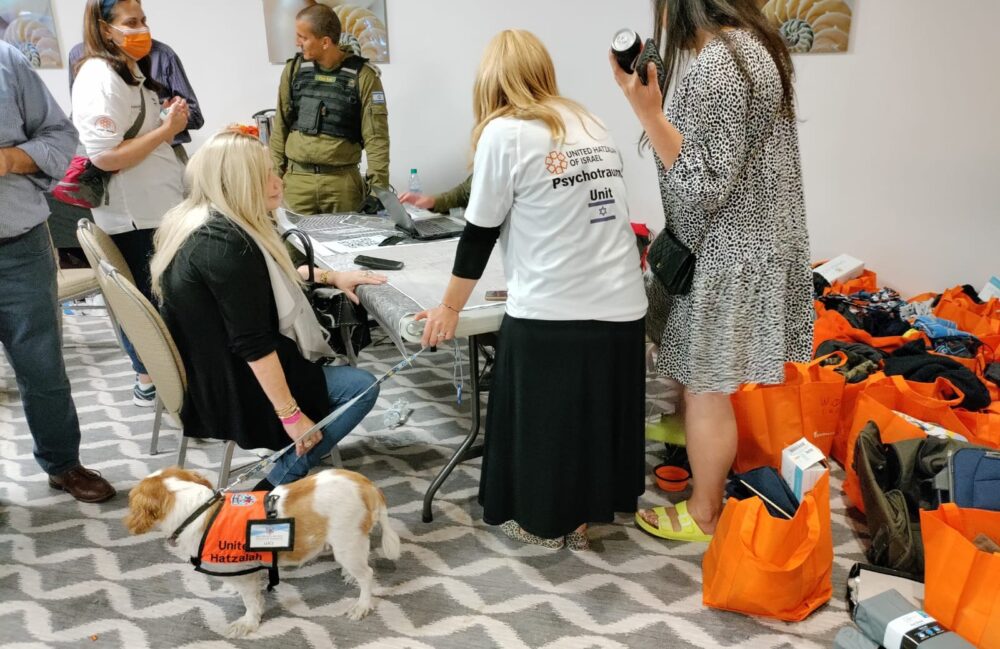 Batya Jaffe and therapy dog Lucy, along with a member of the IDF Home Front Command, assisting family members of missing people in Surfside, Florida. Photo courtesy of United Hatzalah

“It was astounding how much faith these distraught people had in us and in the team from the Home Front Command,” said Jaffe, speaking from the hotel where hundreds of people were being assisted by first responders, chaplains, police, social workers, firefighters, counselors, DNA testers, and volunteers bringing food and drink around the clock.

Mission leader Dov Maisel, a paramedic and vice president of operations for United Hatzalah of Israel, emphasized that the Israelis “haven’t come to replace any of the services that are currently available here. We came to complement these efforts and add the tools that we have in our repertoire, that have been accumulated throughout the years from our previous missions abroad, or by responding to terror attacks and mass-casualty incidents in Israel.”

One man was distressed to the point of being unable to function. He kept repeating the names of his family members who were missing in the rubble, Maisel said.

“Members of the PCRU approached him and were able to break him out of his loop and enable him to gain some sort of control over his actions, bringing him from a heightened state of stress to a lower level of stress which would allow him to function like his normal self.”

Dovie Maisel, Director of Operations, and the leader of the Psychotrauma and Crisis Response Unit, gives a report from Day 2 on the ground in Surfside, Florida.

Posted by United Hatzalah of Israel on Monday, June 28, 2021

“The people we are dealing with are emotionally destroyed,” reports Joseph Dahan, a founder of Hatzalah of South Florida — part of a voluntary first-response network in American Jewish communities (not affiliated with United Hatzalah of Israel).

Dahan has been coordinating some 70 volunteers in rotating shifts to provide 24-hour first-response medical services and triaging in cooperation with Miami Dade Fire Rescue. 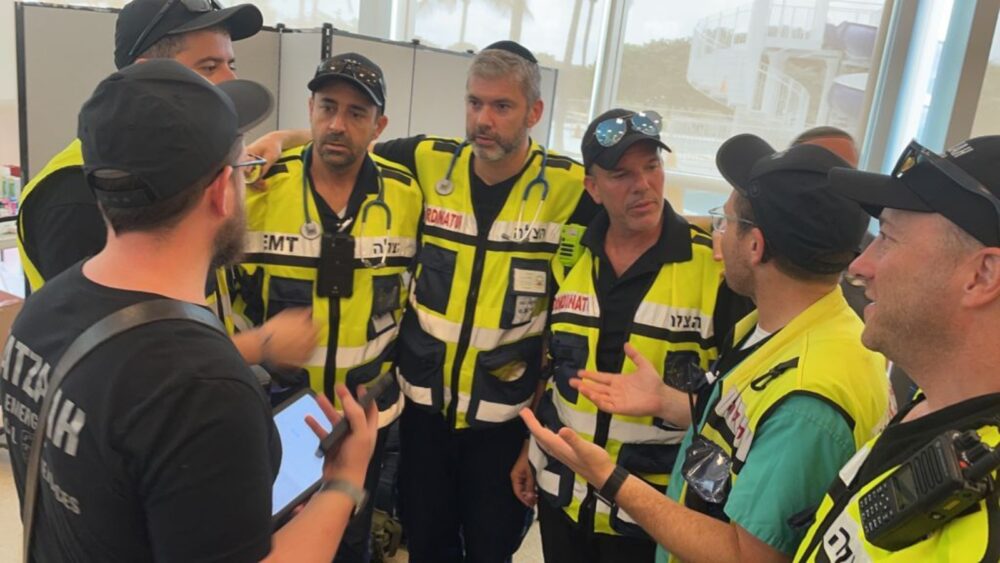 Joseph Dahan, third from left, and other members of Hatzalah of South Florida. Photo courtesy of Jospeh Dahan

“I had to deal with a 35-year-old woman who was grieving the loss of her very close friend and her friend’s six-year-old daughter. She even began having chest pains,” Dahan tells ISRAEL21c.

“We have many different types of interactions with patients, and each is intense. When you’re sitting with them and trying to help them deal with such a situation it tears your heart apart,” he says.

“When you hear about the children that’s when you just lose it. But we have to maintain our composure so we don’t become patients too,” he adds.

“It was a full refresher on everything we should be expecting and how to act, what to do, and how to properly collaborate,” Dahan tells ISRAEL21c.

Many Hatzalah of South Florida volunteers previously received training in Israel as part of the Magen David Adom International Unit established in 2007.

“It’s one thing to send guys for training in Israel a couple of years ago but it’s another thing to have guidance when we’re actually on the scene providing services. We also have guys who were not at the initial training and never faced this kind of situation before,” says Dahan.

“That confidence and reassurance that we gained from a pro in Israel created a tremendous amount of confidence that our guys needed on the ground.”

After evacuating residents from the remaining portions of the building, Hatzalah of South Florida brought in physicians to write prescriptions for evacuees who had no access to their prescription medications.

“They wrote several hundred prescriptions. Then we worked with the local Publix pharmacy to fill those prescriptions while the Red Cross and FEMA were relocating these individuals to temporary housing,” says Dahan.

“Publix gave a very discounted rate but the Israeli consulate [in Miami] actually paid Publix for all the prescriptions, which was pretty amazing,” he adds. 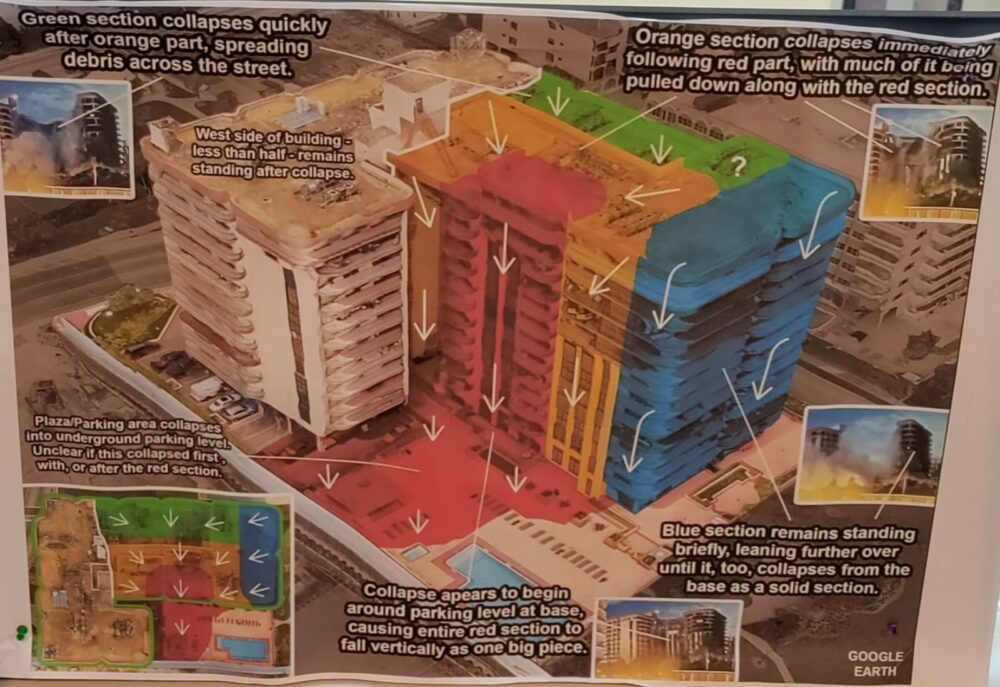 A detailed depiction of how the building collapsed in stages. Image courtesy of United Hatzalah

Surfside, a town of about 5,700 residents, has a diverse population including a large Jewish community. But the efforts of the Israelis and local Jewish groups extend to everyone in need.

“Our primary focus is to assist the Jewish community; however, we provide our services to humans – it doesn’t matter what is their race, creed or religion,” says Dahan, whose group began operations in 2009.

Raphael Poch, a member of the PCRU and a spokesperson for United Hatzalah of Israel, said his delegation worked with the IDF Home Front Command and family members of those missing to map out the layout of Champlain Towers South and to estimate how many people lived in each apartment.

“For the next five hours, teams of two to three IDF members, together with PCRU members, cataloged all of the details submitted by family members so that the search-and-rescue teams could have a clear picture of where in the rubble to look for survivors,” said Poch. 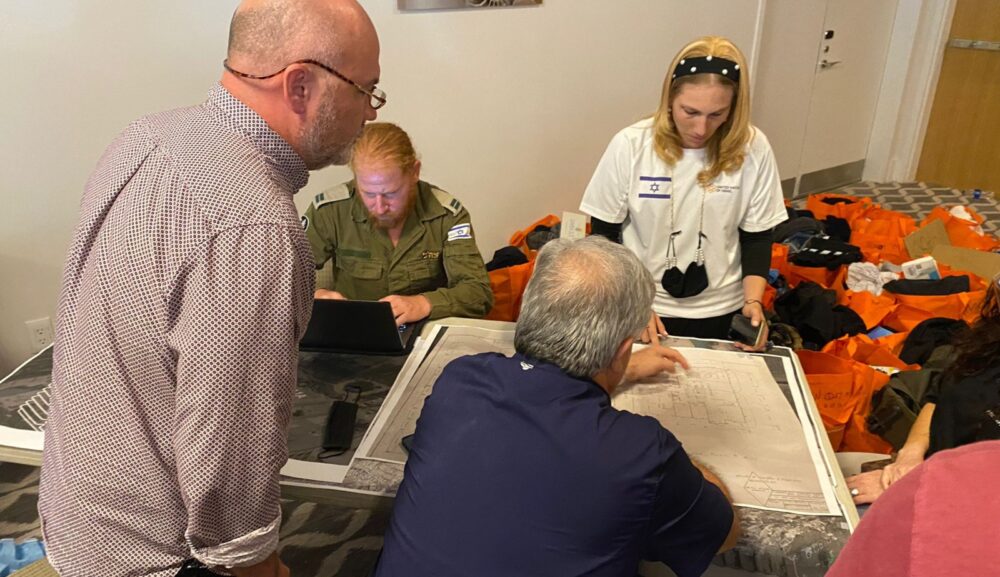 Batya Jaffe of the United Hatzalah Psychotrauma and Crisis Response Unit, and a member of the IDF Home Front Command delegation, assisting family members recreate the apartment of their missing loved one in Surfside, Florida. Photo courtesy of United Hatzalah

“The energy in the room was that of an ongoing and drawn-out trauma,” he added.

“No one in that room has closure, and that is something that they direly need. Some people flew or drove more than halfway across the country to sit in a communal room, with other family members of missing people, whom they don’t know, in order to perhaps hear good news about their loved one. Seeing the faces of hopeful despondency on the faces of pretty much everyone there was simply heartbreaking.”

Poch said the mission of the PCRU is “to show these people that they are not alone and that they can help in the search efforts. They provided essential information that may help lead to more rescues.

“In addition, we reminded people that they would not go through this tragedy alone. We encouraged people to comfort one another and be there for one another. That in and of itself is a type of healing and something which we can all do.”