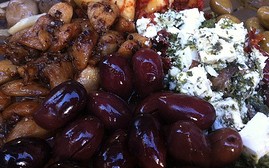 Perhaps the tastiest part of the ISRAEL21c trip was last Friday, when our reader-visitors got an insider’s sampling of the foods from Tel Aviv-Jaffa.

But the day started on a more emotional note with a guided and impassioned tour of Israel’s Independence Hall, the former home of Tel Aviv’s first mayor, Meir Dizengoff.

Tucked in beside trendy cafés in the economic heart of Tel Aviv, Independence Hall on Rothschild Boulevard offers a modest tribute to the history and events that led to Israel’s founding as a state in 1948. The presentation left participants in tears as we learned how Israel then, with some 100,000 Jews under siege in Jerusalem, managed to declare Israel an independent state and then enter a war within hours — even before the name for this new Jewish homeland had been chosen.

The British Mandatory government was about to leave, but with Shabbat approaching Israel was born. We listened to the heavily accented David Ben-Gurion give his speech, as Hatikva, the new national anthem of Israel, ended the ceremony.

Still in tears, but uplifted over this triumph especially in comparison to what we see today, we jumped on a bus and met Renen Schorr, the founder and head of the Sam Spiegel Film and Television School in Jerusalem. Against the odds, we learned, and with few resources, Israel has developed an enterprising film and television industry.

We gleaned insider first-hand information on star directors like Mike Leigh, and learned about the first Israeli-American film that Natalie Portman is making in Israel. Will it be in English or Hebrew? The decision isn’t out.

An intense Q&A session with Schorr proved how stimulating and engaging the arts are to ISRAEL21c’s readers.

The Holy Shabbat was approaching, and guests could choose to celebrate in a local synagogue. But first we traveled to Jaffa by the sea, where we learned about the history of Israel’s most famous food brand, the Jaffa orange.

Culinary tour guide Inbal Baum from Delicious Israel then took us to what every insider knows: where to eat the best hummus in the world, at Abu Hassan/Ali Caravan in Jaffa. But it’s not just about going there, she points out, it’s about knowing what to order.

It is safe to say that most participants liked the masabahah, a warm fresh mix of creamy tehina with hummus, olive oil and lemon juice. More accurate to say that they dug in.

Going onwards, we joined the regular insider bustle every Tel Avivian faces before showdown — we mean sundown — when all the shops close for Shabbat. We tasted treats left, right and center at Shuk (Market) Levinsky, Israel’s answer to the Middle East spice market. Now we were eating burekas and oven-roasted garlic, drinking fresh Turkish coffee and tasting spices made famous in the Middle East.

The official tour of the day ended with Tel Aviv’s most famous and tasty shakshuka in the Carmel Market (no, not from Dr. Shakshuka in Jaffa!).

Become a GEM member
Read more on:   Blog, Behind the scenes, Journey to Israel, Independence Hall