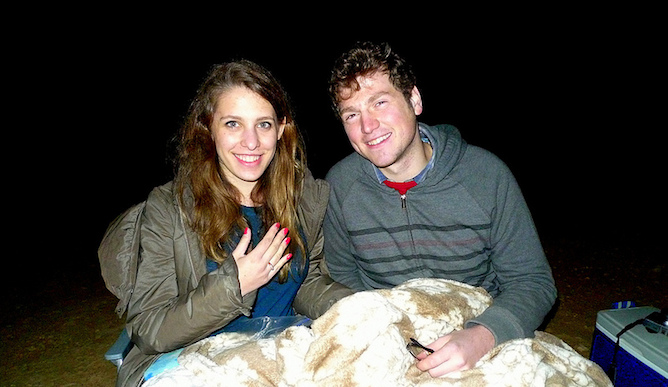 Just before Valentine’s Day 2012, ISRAEL21c included Astronomy Israel’s nighttime star tours in Mitzpeh Ramon as one of the top 10 romantic spots in Israel.

Ira Machefsky, the American émigré who runs the tours in the Negev town, then posted the following offer on his website, astronomyisrael.com: “Propose on a star tour and it’s free!”

On the night of January 13, he reports happily, it happened.

“The offer has been there almost two years and finally a couple took me up on it,” he tells ISRAEL21c.

Pinhus Dashevsky and Lara Porter, both New York college students, got engaged on a star tour that Dashevsky arranged in advance as the high point of their winter-break vacation in Israel.

“They met on a plane to Israel three years ago, and then a few months later they were both on the same summer program in Israel,” Machefsky relates. “They got to know each other as friends, and one thing led to another.”

In planning their vacation, Dashevsky searched online for a way to indulge his girlfriend’s love of the stars. He discovered Astronomy Israel and called to make a reservation, explaining his wish to propose marriage at the end of the session.

When the moment arrived on that chilly Monday night, Machefsky began playing one of the romantic MP3 files that Dashevsky had sent him ahead of time, and excused himself from the scene – but stayed close enough to hear the words, “Will you marry me?” “I’m happy to say she did agree, and we broke out the champagne and had a little toast in the desert,” says Machefsky.

“I got to see the ring. It was a stellar ring,” he puns. “Then we went to where they were staying at the Green Backpackers lodge, where we’d arranged a party with cake and wine.”

Machefsky stresses that his free offer still stands for any about-to-get-engaged couple heading to Mitzpeh Ramon. “Come on down and get hitched!”