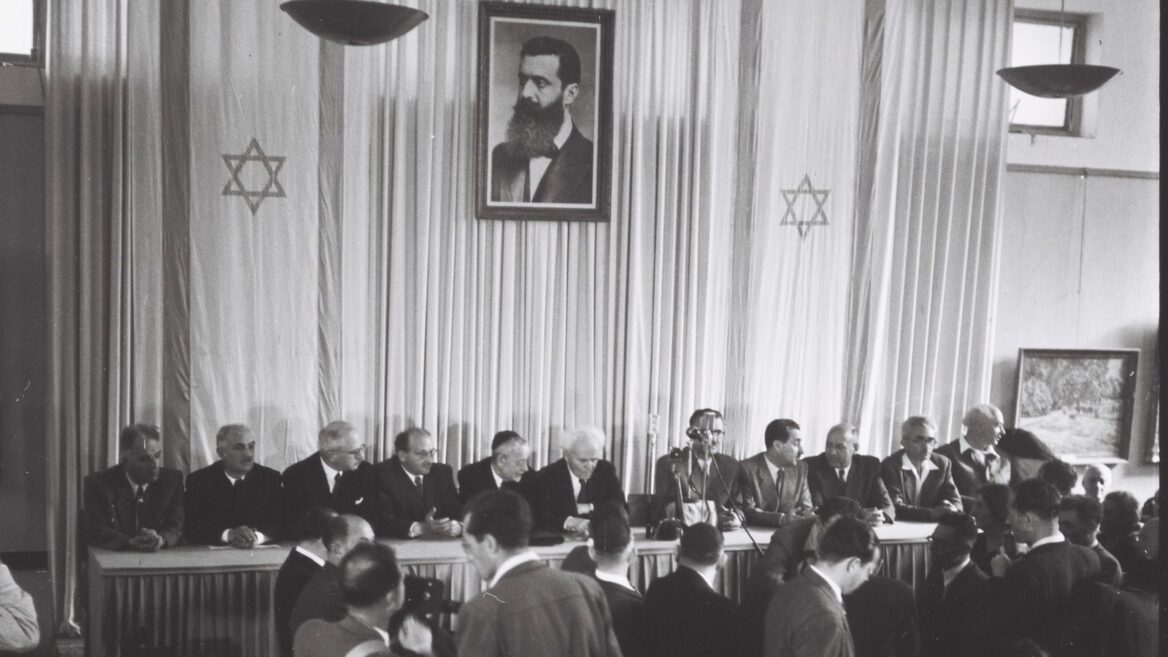 David Ben-Gurion, center, preparing to read the Declaration of Independence of the State of Israel in what would become Independence Hall, May 14, 1948. Photo by Zoltan Kluger/Government Press Office

Starting at nightfall on May 4, Israel will celebrate its 74th Independence Day (Yom Ha’atzmaut).

People will be out barbecuing, partying, picnicking, and watching aerobatic shows, celebrity extravaganzas, ceremonies and the annual Bible Contest for Youth on live TV.

The date on the Hebrew calendar (Iyar 5) marks the expiration of the British Mandate in 1948. This paved the way for the establishment of the state of Israel as a Jewish democracy following some 2,000 years of exile and foreign rule.

It was not an easy birth. Thousands of lives were lost in the War of Independence. And yet the new nation quickly absorbed hundreds of thousands of refugees from Europe, North Africa and the Middle East, launched a program of international aid to developing nations, and fulfilled first Prime Minister David Ben-Gurion’s vision to “make the desert bloom.”

We chose 11 sites – and there are plenty more! — where you can learn the history of the modern state of Israel and its earliest leaders. 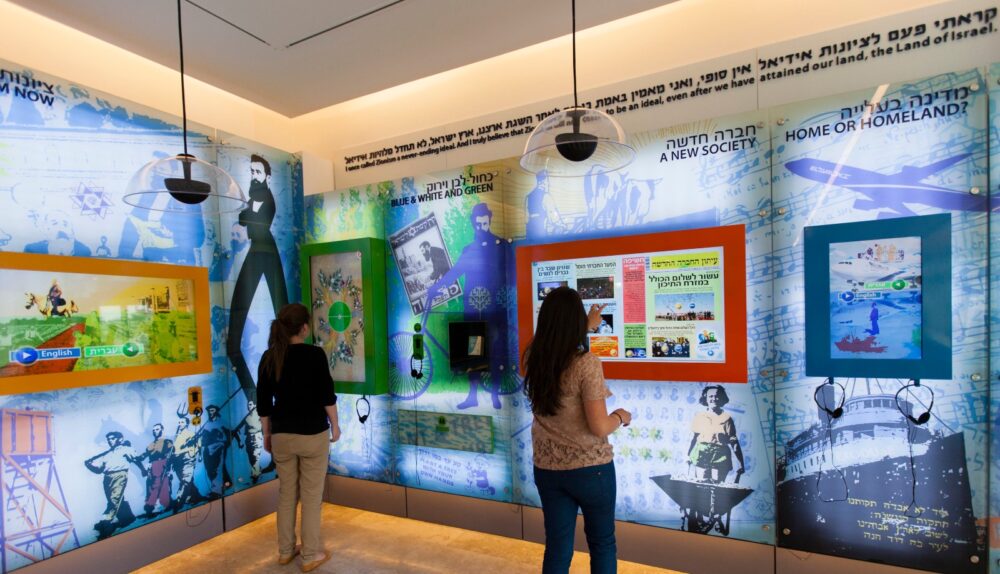 Visitors at the Herzl Museum in Jerusalem. Photo by Flash90

The Herzl Museum on Mount Herzl in Jerusalem provides a unique audiovisual encounter with the visionary of the Jewish state. Born in 1860 and living only till age 44, Theodor Herzl was an Austro-Hungarian journalist/playwright known as the father of modern Zionism.

Though he did not live to see the fulfilment of his dream, his writings – including the famous quote “If you will it, it is no fairy tale” – inspired the return of the Jewish people to their ancestral homeland. To this day, Herzl’s picture hangs in Tel Aviv’s Independence Hall (see more about that below).

The interactive museum dedicated to Herzl’s legacy offers a thought-provoking, hour-long tour (by reservation only) about the man and his daring aspirations, deep disappointments and turbulent personal life. 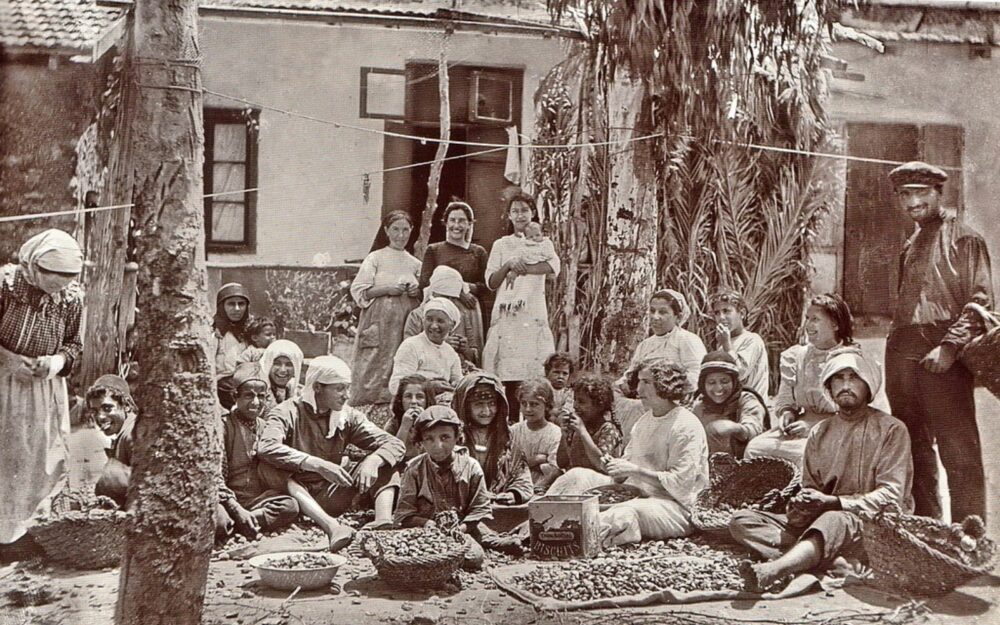 Ten pioneers from Ukraine established Rishon LeZion in 1882 as the first (rishon) Jewish settlement in this part of what was then the Ottoman Empire. Today it is Israel’s fourth largest city.

One of the highlights of the Rishon LeZion Museum is the basement where the poet Naftali Herz Imber wrote the words of Israel’s national anthem, “‘HaTikva,” in the late 1880s.

Through original artifacts, photographs and documents, this museum presents a fascinating history of this pre-state city and the many difficulties its founders faced. Tours in English must be arranged in advance. 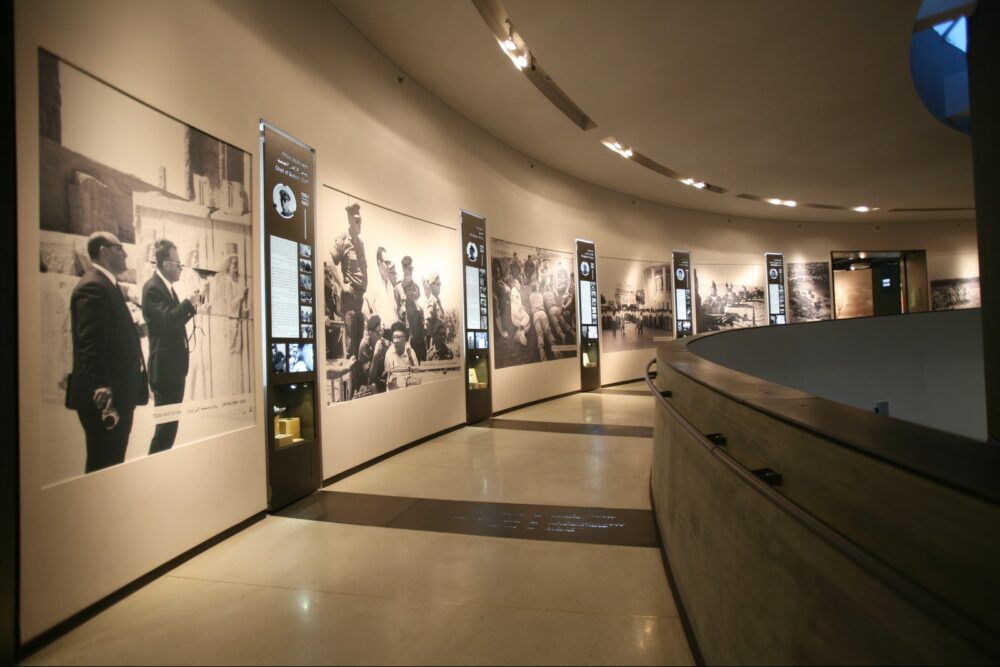 A corridor of the Israeli Museum at the Yitzhak Rabin Center. Photo by Ella Litos/Mabatim

The Israeli Museum in Tel Aviv’s Ramat Aviv neighborhood presents the history of the state of Israel along with that of Prime Minister Yitzhak Rabin, who was assassinated in 1995.

The exhibits’ sensor-activated audio guides focus on historical turning points and challenges in the country’s development, drawing on more than 180 documentary films, 1,500 photographs and hundreds of memorabilia.

In homage to Rabin’s Nobel Peace Prize, architect Moshe Safdie designed the edifice in the form of two huge doves. Visitors can take a self-guided tour in Hebrew, English, Spanish, Russian, French or Arabic. Guided tours must be reserved in advance. 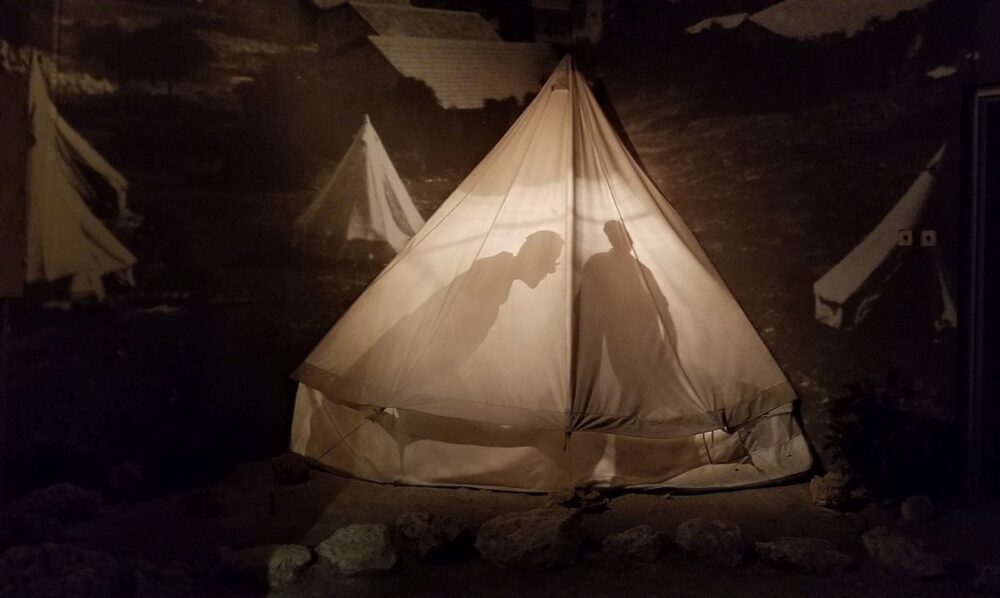 Six years before Israel’s declaration of independence in May 1948, the underground Haganah army of pre-state Israel formed the Palmach strike force, which initially worked with the British army during World War II.

After the war, the Palmach defied the British by accompanying and commanding most of the 60 illegal immigration ships carrying tens of thousands of Holocaust survivors to the port of Haifa. During Israel’s the War of Independence, Palmach units fought several key battles.

The innovative and experiential Palmach Museum, also in Ramat Aviv near Tel Aviv University, relates the Palmach legacy not through displays or documents but by bringing to life the stories of individual Palmach members from its establishment until the end of the War of Independence.

Visits must be pre-arranged, as visitors are assigned to groups. The 90-minute presentation is available in Hebrew, English, Spanish, French, Russian and Mandarin Chinese. 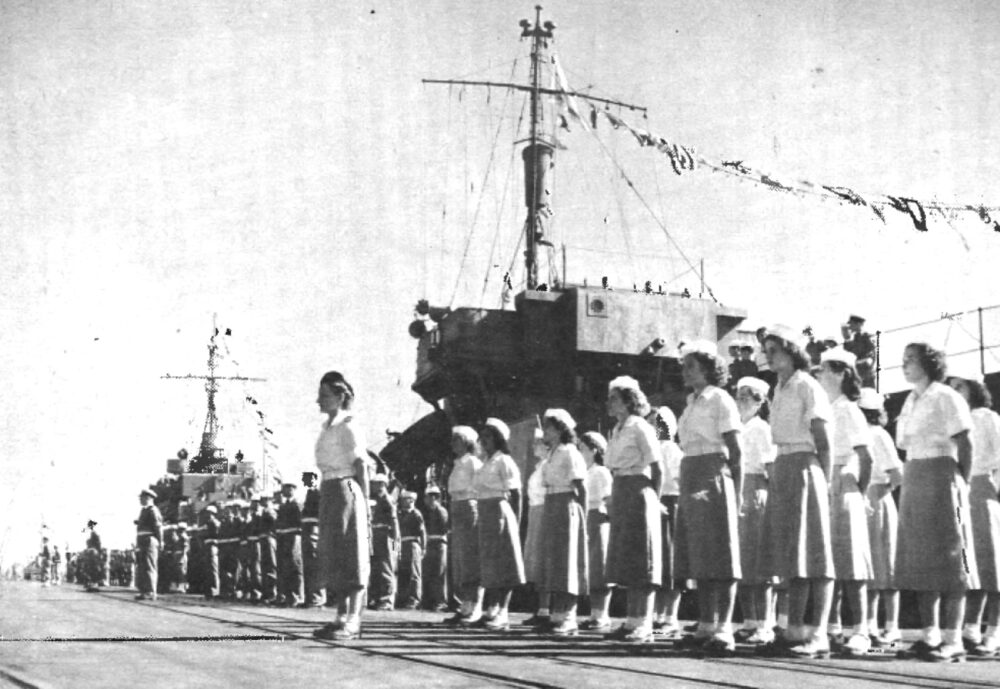 Female navy recruits at the Port of Haifa, 1949. Photo courtesy of the Clandestine Immigration and Naval Museum/Wikimedia Commons

In this museum on Haifa’s Mediterranean shores you will learn about the clandestine immigration to Palestine during the British Mandate, as well as the related history of Israel’s navy (originally the naval platoon of the Palmach).

At the center of the museum stands the Af Al Pi Chen (“Nevertheless”) immigrant ship. There are displays reconstructing life at the detention camps in Cyprus where the British sent illegal immigrants, and part of the Patria deportation ship sunk by the Haganah at the port of Haifa. You can tour a naval submarine and stand on the bridge of the sunken Dakar submarine retrieved from the depths of the sea.

Guided tours in English must be arranged in advance.

Normally, Independence Hall at 16 Rothschild Blvd. in Tel Aviv is the #1 place to begin your tour of Israeli history. However, the house in which David Ben-Gurion read aloud the Scroll of Independence on May 14, 1948, is undergoing extensive renovations and won’t reopen to the public until next year.

Meanwhile, three exhibitions from Independence Hall can be viewed for free in a temporary visitors center in the historic Shalom Meir Tower (Migdal Shalom) on 4 Achuzat Bayit Street. For 12 shekels per person, you can view the movie “We Hereby Declare.” There are no guided tours available in the temporary location.

Click on the video below a virtual tour of the actual Independence Hall. 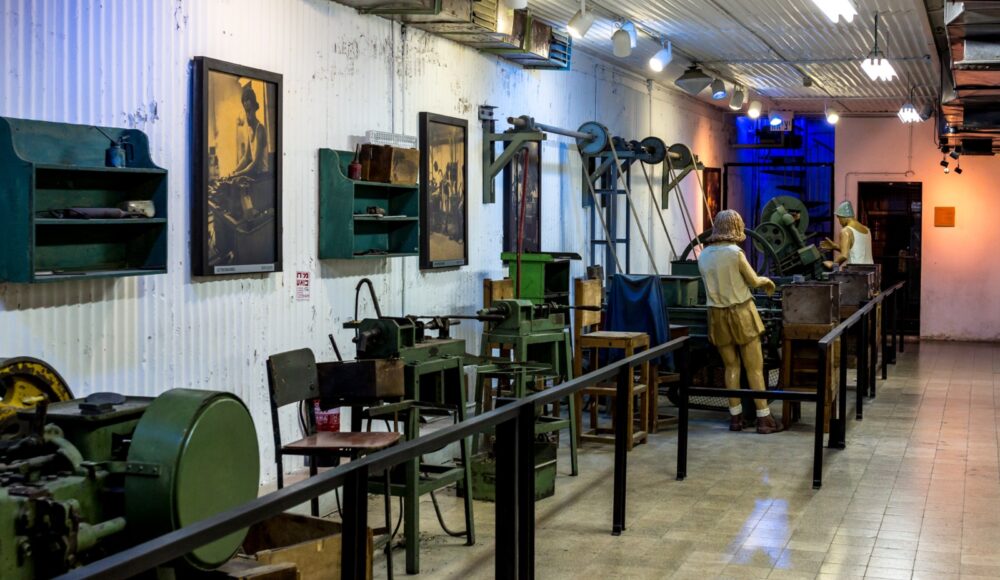 Inside the Ayalon Institute-Bullet Factory, Rehovot. Phot by Dorontalmi via Wikimedia Commons

This literally hidden gem in Rehovot brings alive one of the most fascinating chapters in the story of the establishment of the state of Israel.

Here, right under the nose of the British, a factory the size of a tennis court, hidden eight meters below a kibbutz bakery and laundry, produced 9mm bullets for soldiers fighting in the War of Independence, which began in November 1947.

At great personal risk, 45 young Tzofim Scouts and others secretly manufactured more than four million bullets here. To preserve their cover story – that they were field laborers — the workers spent several minutes every day tanning their faces under a sunlamp.

Tours of the restored old factory begin by finding the secret entrance and descending a spiral staircase. You will see the machinery, which is still in working condition, and hear stories about the factory. The site also features a gift shop and a eucalyptus grove with picnic tables.

Now a national heritage site, the Ben-Gurion Hut illustrates who the man was, not only as a leader and public figure, but also as private person wearing pajamas and reading the newspaper.

The heart of the house is Ben-Gurion’s study with a library of 5,000 books (his house in Tel Aviv holds 22,000 more) covering his fields of interest: Judaism and the Bible, philosophy, history, geography and more. In this room, Ben-Gurion wrote his memoir, which he dedicated to Israel’s youth and coming generations.

Also on the kibbutz is an animated short film on the life of Ben-Gurion and his vision regarding the Negev Desert; three separate exhibitions which further explore Ben-Gurion’s character and worldview; and an interactive family activity called “The Test of Time,” available in English. 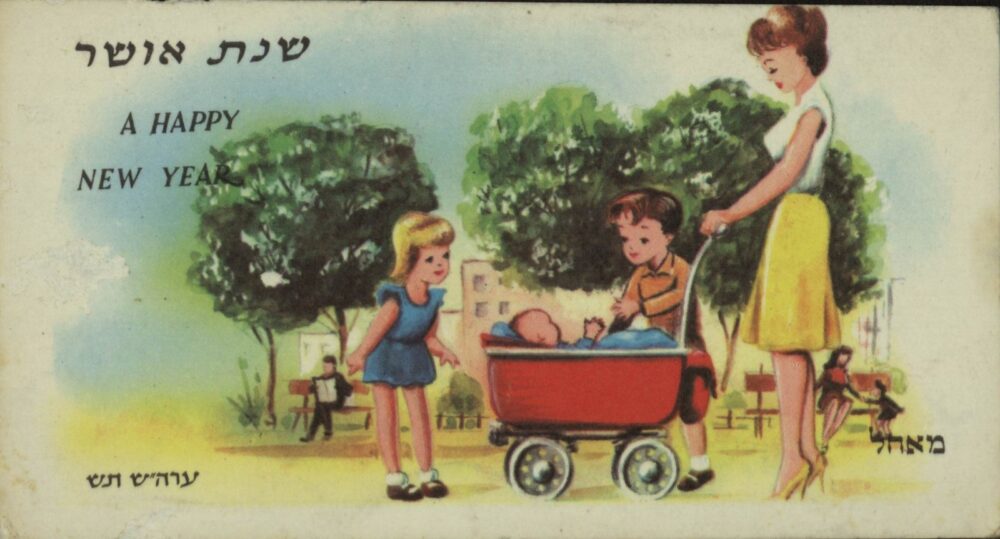 Founded in Jerusalem in 1892, the National Library of Israel (NLI) holds the collective memory of Israelis of all backgrounds and faiths and the Jewish people worldwide.

Over the past decade, NLI’s mass digitization project has made more than 1.6 million books, 1 million photos, more than half a million manuscripts, and thousands of maps, musical recordings and periodicals accessible online.

The library, located on the Givat Ram campus of Hebrew University, offers weekly guided group tours and self-guided tours of the collections and the giant stained-glass windows created by the artist Mordecai Ardon.

A new 45,000-square-meter library complex is expected to open later this year between the Israel Museum and the Knesset. 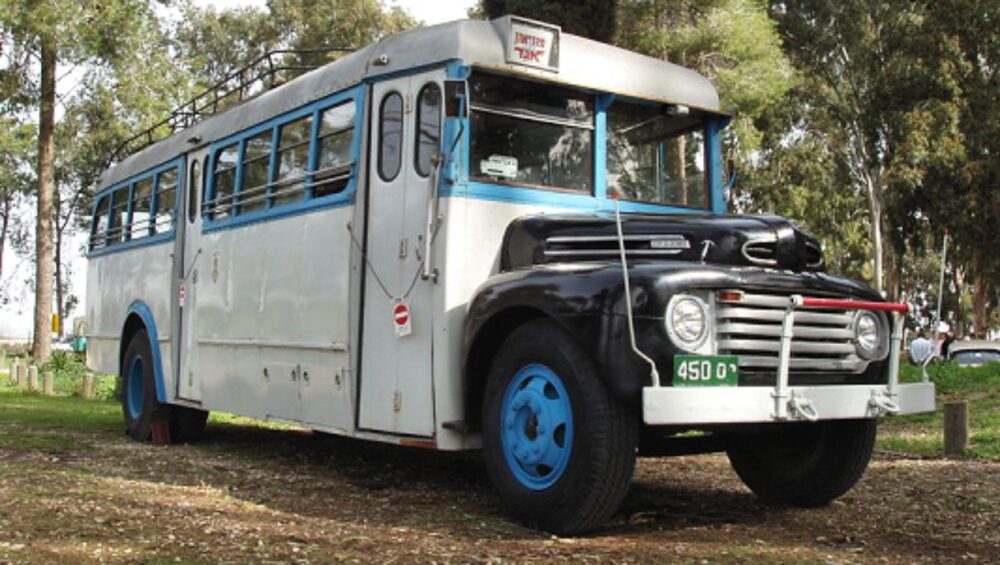 This Ford bus, vintage 1948, is one of more than 60 buses displayed at the Egged History Center in Holon. Photo by Andy Radulescu

The Egged bus cooperative – named by national poet Chaim Nachman Bialik – was incorporated in 1933 and played a central role in the development of modern Israel.

Today, Egged is one of the world’s largest operators, moving about a million passengers daily and employing more than 9,000 people.

The Egged History Center in Holon presents more than 60 buses that have been lovingly collected and renovated, reflecting nearly 80 years of public transport in the land of Israel.

Visitors learn that the first public buses were converted British Army surplus trucks from World War I. The oldest bus on display is a 1940 Fargo bus assembled in Jordan from American and British parts.

Reservations are required. There are no tours in English, but all displays have signs with English translation. 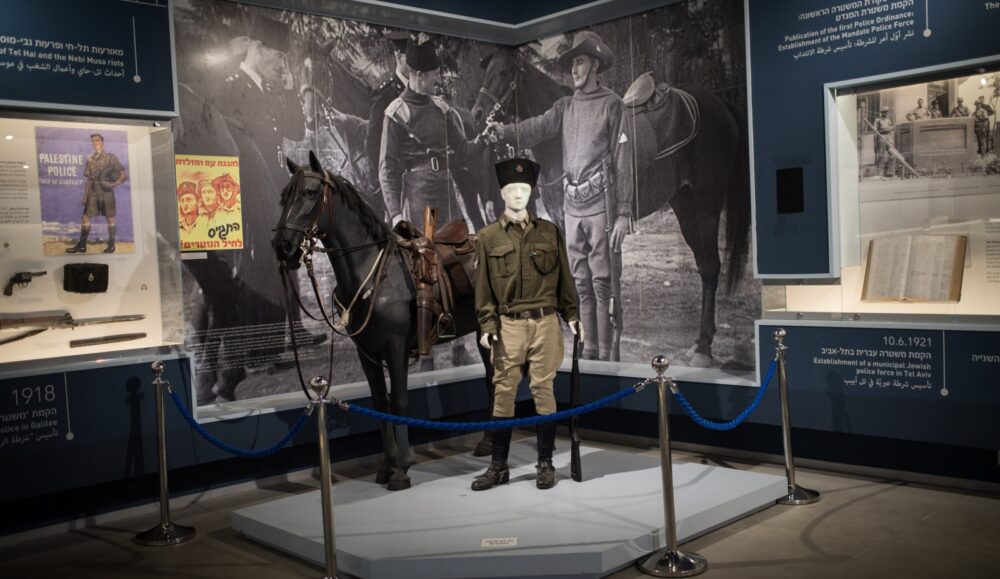 A display room at the Israel Police Heritage Center in Beit Shemesh. Photo by Hadas Parush/Flash90

The Israel Police Heritage Center & Museum, next to the Israeli National Police Academy in Beit Shemesh, uses unique artifacts and multimedia presentations to tell the story of police in Israel, from the first Jewish defense organizations in the late Ottoman period and the British Palestine Police Force (1907-1948) through the foundation of the current police force.

Free guided tours, led by active police officers, bring history alive and help the audience experience some of the challenges Israel’s finest faced and expect to face in the future.