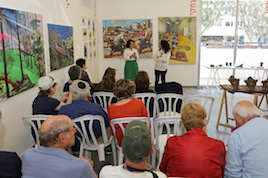 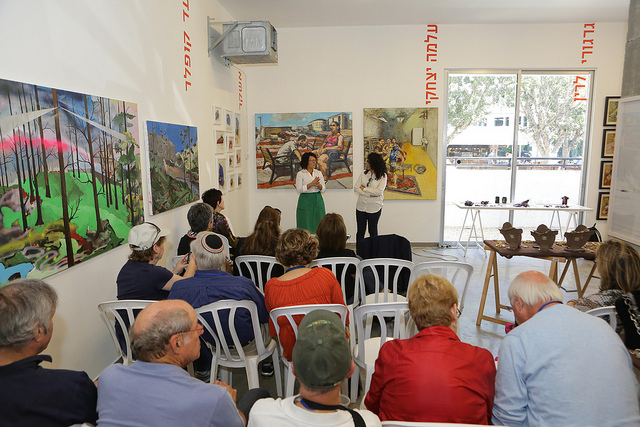 Participants learn about some of Israel’s contemporary artists at the Pop Up Pinzeta gallery. Photo by Roy Katalan.

Excitement was running high as ISRAEL21c’s Journey to Israel participants headed off early Sunday morning to Rehovot to Stratasys-Objet’s headquarters to learn about the next industrial revolution. The group got a behind-the-scenes tour of the Israeli-American company at the heart of the amazing 3D printing technology.

Guy Menchik, VP head of Incubation Labs, introduced us to the world of polymers and plastics, top secret liquid printer toners, digital models and seemingly endless potential. Menchik repeated that everything as we know it today will be affected by 3D printing — citing it will alter every field it touches.

The temptation to splurge on a desktop version of this uber-cool printer ($10,000 for the home version) was on everyone’s minds.

Our next stop continued in the vein of innovation but had nothing to do with machines. We met Galit Reismann, founder of TLVstyle, in Itzik Canetti’s Jaffa photography studio to hear about and meet some of the young rising designers of the fashion scene. Reismann runs a boutique touring business designed to show off upcoming designers in Tel Aviv’s growing fashion industry. 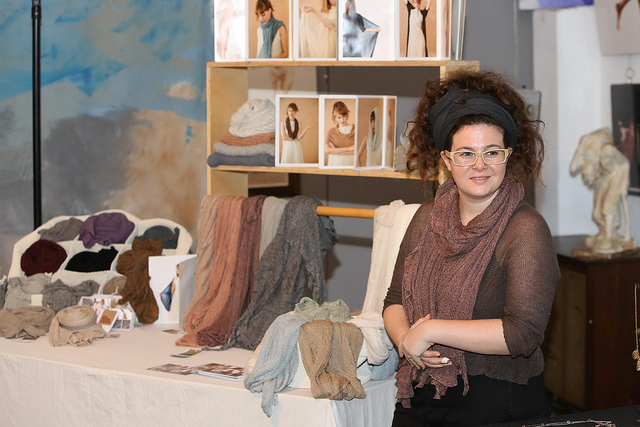 “I’m trying to support the emerging young designers and to be a platform and expose their story and special handwriting that brings a new message to the world,” Reismann tells ISRAEL21c. “The way the materials that they are using, the shades they are creating, the combination and collaboration with other young designers that really help them to pop up among the design industry in the globe. I think this is what is special about the Israeli designer.”

She introduced us to Toosha – gorgeous eco-textile designers, Inbar Shahak – an amazing textile jeweler, Tamar Branitzky – a unique textile designer of scarves and Galya Harish – an innovative jewelry designer. All the young designers credited their creativity to their Israeli environment. 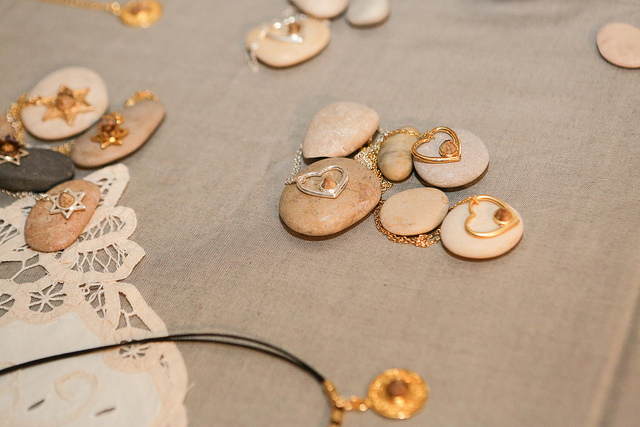 And though participants in the group had never heard about them before, after a private shopping opportunity, there’s no doubt these Israeli designers won over new fans.

Reismann had more surprises in store and we boarded the bus to continue on to Rothschild Boulevard, Tel Aviv’s legendary boulevard. Here, we were introduced to the freshest contemporary artists at the Pop Up Pinzeta gallery.

“Pop up stores are the trendiest things in Tel Aviv now. They allow the young designer to reach the audience which they couldn’t otherwise do because they cannot rent store space,” Reismann tells the group.

Gregory Larin showed off art pieces that mix the extreme parts of life with street culture; while jewelry designer Nurith Jaglom displayed her one-of-a-kind sparkly pieces for people “who like to be noticed.”

The Media Innovation Lab (miLab) at the Interdisciplinary Center (IDC) in Herzliya was our next stop. Here, we got an inside look at how students create and innovate the next big thing. The popular Human Mode App that helps people disconnect from their smartphones was made here.

It was a quick tour at the academic center before the group shuttled back to Tel Aviv for closing comments. Gidi Grinstein — president and founder of the Reut Institute – was excited to act as “the closer”.

Grinstein spoke about Israel’s need for “societal innovation” and that in order to keep the Startup Nation designation the government must push the “need for innovations that benefit society” and not just a few people in a company.

Grinstein left the group with food for thought while the chefs at Liliyot restaurant plied participants with a last supper to remember. Planes were waiting to take off from Ben-Gurion airport but the at-risk teens, key members of the cooking staff at this social business, were busy roasting, frying and filleting gorgeous gourmet creations.

The week-long ISRAEL21c-Keshet Journey to Israel was packed with innovation and creativeness, fun activities and touring, eye-opening lectures and workshops. For those sitting beside participants on the flight back to Australia, the US, England or Italy – the reason they were fast asleep had nothing to do with sleeping pills and everything to do with a crazy busy enlightening week in Israel.

Become a GEM member
Read more on:   Blog, Keshet, Israel, Behind the scenes, Journey to Israel