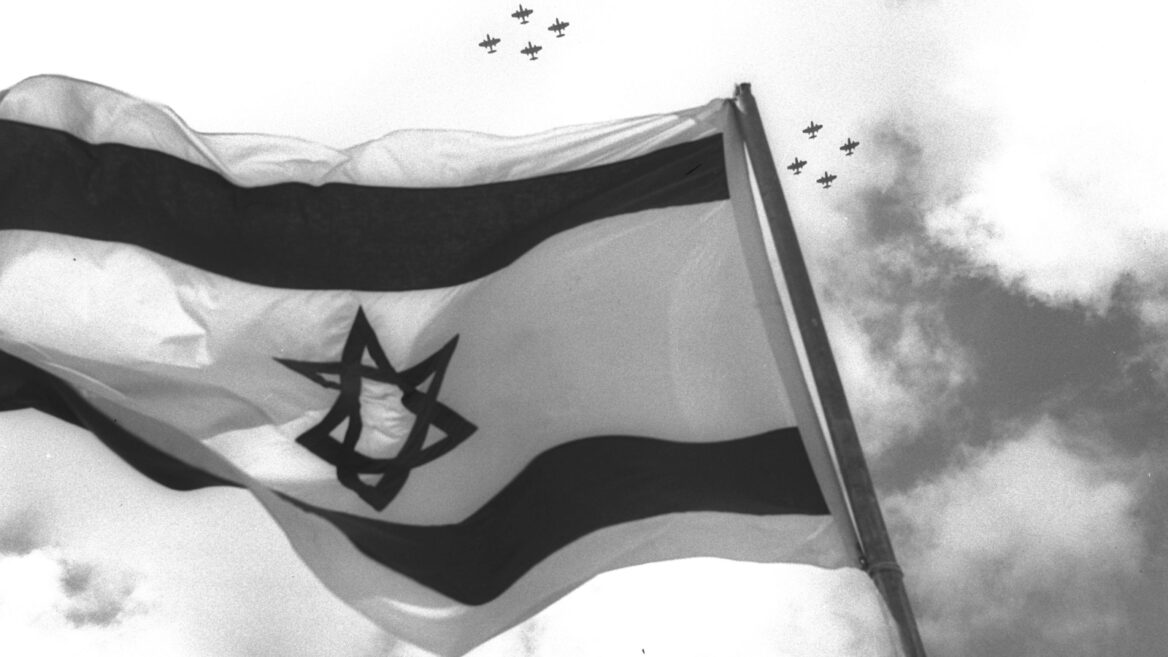 Fighter jets fly over the Israeli flag on Independence Day celebrations in 1957. The state’s founding a decade earlier was full of fun facts. Photo by Moshe Pridan/Government Press Office

Israel is celebrating 74 years of independence on May 5 this year. The passage of time and the solemn black-and-white photos of the period lend a feeling that the historic events and the nascent country’s first footsteps were orderly, well-thought-out affairs.

But in reality, things couldn’t be more different: the country’s very name was hotly debated, the Declaration of Independence was far from ready on time and a state emblem was yet to be found.

Scroll down below for the top fun and fascinating facts surrounding Israel’s founding, and you will see that the country’s famous atmosphere of balagan (chaos) and resourcefulness has been here right from the start. Happy holiday!

In 1943, when World War II was still raging, veteran Zionist leaders convened a large public meeting in Ramat Gan called “The People’s Congregation” from which a temporary Jewish government would be elected. As the National Library of Israel’s “The Librarians” blog recalls in detail, nothing momentous came out of all those lengthy speeches. Still, they tried.

Israel is obviously nowadays called Israel, but other options included Zion (dismissed because it’s a biblical name for Jerusalem, and also to distinguish between the general Zionist movement and Israeli citizenship), Ever (after the biblical figure Eber, and similar to the Hebrew word for Hebrew, Ivrit) and Judea (rejected in order to differentiate between Jews and Israeli citizens).

Israel, by the way, was the name suggested by the country’s first prime minister, David Ben-Gurion.

Israel’s independence was solemnly declared at the entrance of what was back then the Tel Aviv Museum. The famous photos show long drapes, Israeli flags, a portrait of Zionist visionary Theodor Herzl and serious-looking men assembled on stage and on chairs in front of them. The drapes, it appears, were hung to hide the nude paintings on the walls. 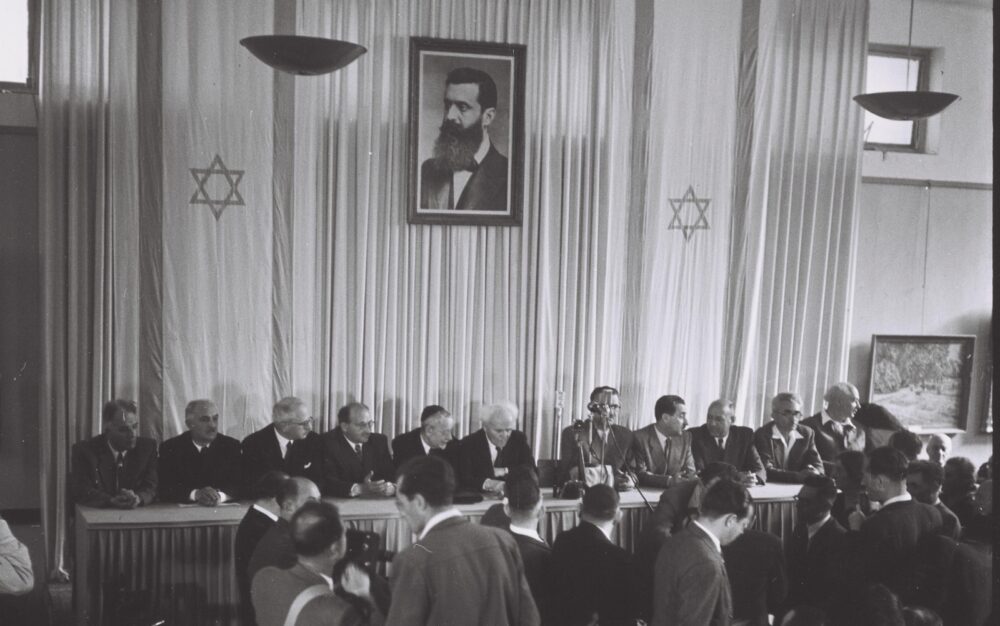 The drapes hanging behind Israel’s leadership were put in place to cover nude paintings, and the portrait of Herzl was a quick loan. Photo by Zoltan Kluger/Government Press Office

The chairs were taken from surrounding cafés and the portrait of Herzl and the flags borrowed from the United Israel Appeal because the decorating budget didn’t quite stretch to purchasing them. The whole thing took 24 hours to put together, but the results ended up looking absolutely timeless.

Israel’s Declaration of Independence, aside from being a canonical text, is a beautiful work of painstaking calligraphy. So painstaking, that was it wasn’t completely ready in time for the signing ceremony. As a result, its signatories did not add their names to the bottom of the text, but rather to a piece of parchment that was later sewn by its designer’s wife into the complete scroll.

Ben-Gurion, in case you were wondering, read the text from a plain typewritten piece of paper to which he added some handwritten notes. 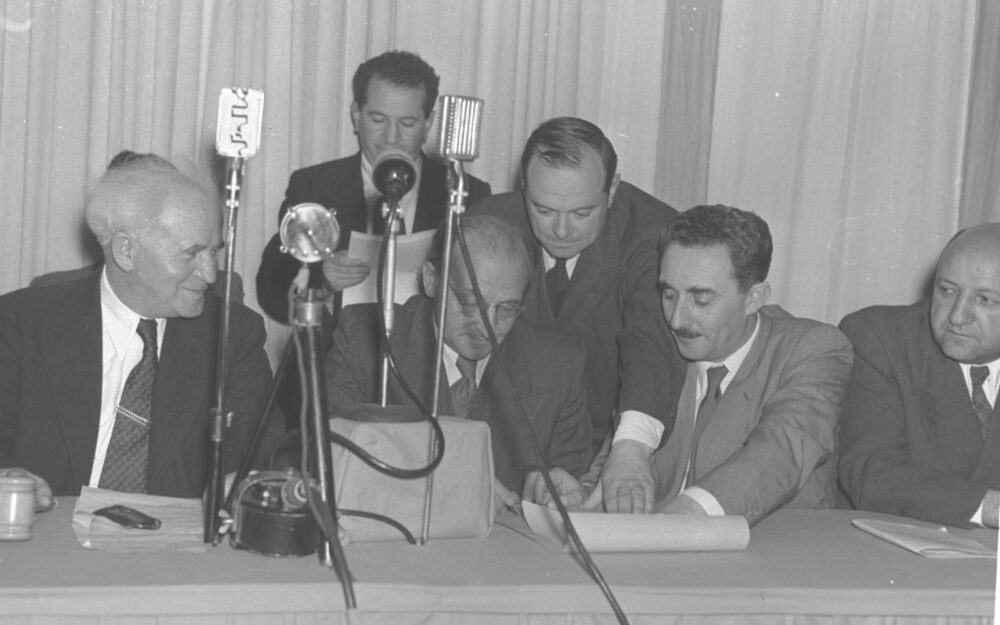 Israel’s leaders sign an empty piece of parchment that will later be sewn into the text of the Declaration of Independence. Photo by Frank Shershel/Government Press Office

Rebecca Affachiner was a true trailblazer, becoming one of the leading Zionist figures of the early 20th century and dedicating her life to the Jewish community and Zionist cause. Among her remarkable achievements was the fun fact that she flew the first Israeli flag in Jerusalem on May 14, 1948, following the announcement of the establishment of the state. Resourceful woman that she was, she sewed the flag herself and used simple blue crayons to color in its Star of David and stripes. Ingenious. Creating a state emblem is no easy task, and one which needs to take into consideration design, history and functionality. Shortly after the foundation of Israel, the new government invited the public to submit proposals, specifying that the said emblem must feature a seven-lamp candelabra, seven stars and the colors blue and white.

Dutiful artists sent in 450 proposals, and eventually a design by Gavriel and Maxim Shamir of Shamir Brothers Studio made the cut. Their drawing included a modern-looking candelabra and stars alongside olive branches but was later changed to feature the candelabra from the Arch of Titus in Rome and the word “Israel.” The stars were dropped, and the result is what we see on lapel pins and coins everywhere. 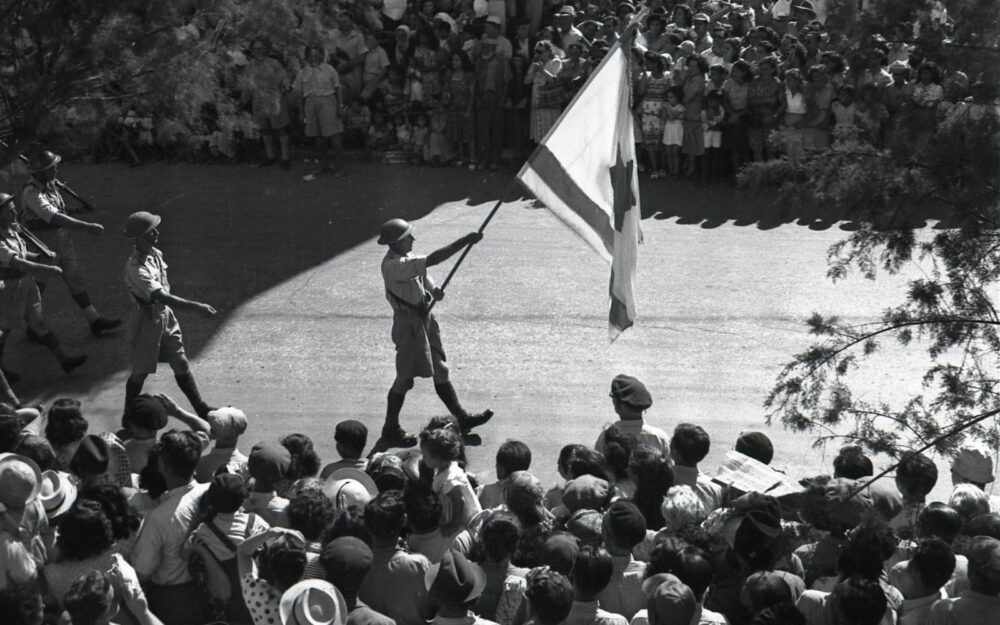 In Israel’s first two decades, a military parade took place every year as part of Independence Day celebrations. But in 1949, a year after the state was founded, things didn’t quite take off as planned. The parade started out alright, but soon the overenthusiastic crowd in Tel Aviv’s streets blocked it from proceeding any further.

The sham was viewed as highly embarrassing and led one newspaper editor to wonder how the same army that had just a year earlier managed to defend the whole country failed to make it across a simple street. 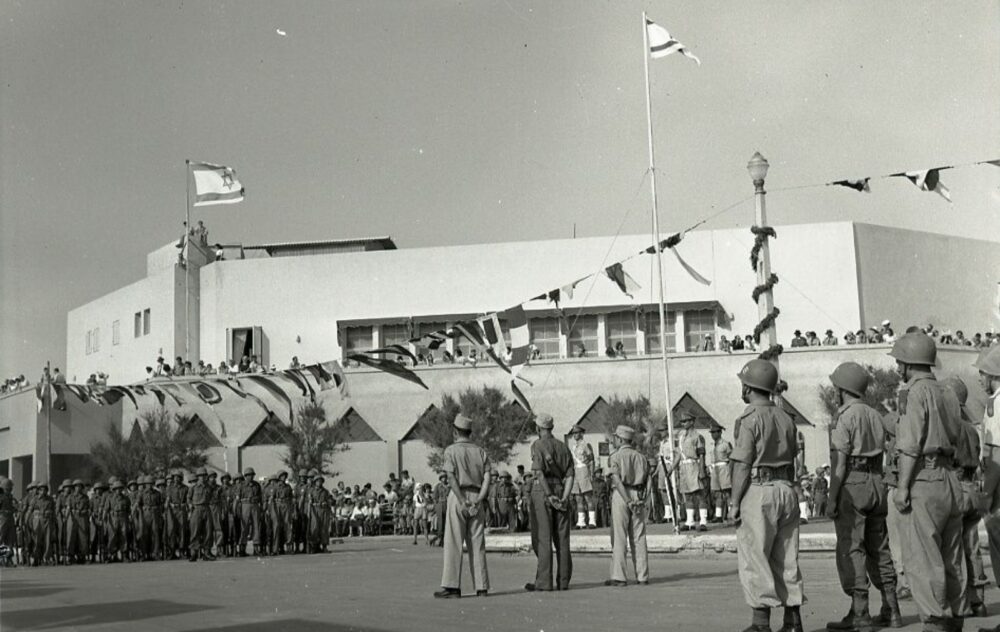 The Knesset, or house of parliament, is a true landmark here in Israel, with its majestic architecture, sculptures and famous glass-stained windows. But the legislative assembly’s first home, bizarrely enough, was none else than a grand movie theater in Tel Aviv called Kessem (“Magic”) Cinema.

The huge building, constructed in 1945, boasted more than 1,000 upholstered seats and enjoyed a fabulous seaside location. For most of 1949 it hosted Israel’s first parliamentarians until they moved to Jerusalem. In later years, the building was used by tax authority officials and the Israeli opera house. It was then torn down and rebuilt as a residential building with quite a history.

UNCOVER ISRAEL - Get the ISRAEL21c
Weekly Edition free by email
Sign Up Now!
Bring Israel's story to life.
Millions of people around the world rely on us to gain a deeper understanding of Israel. We are the trusted source for original content you won't find anywhere else.
You can make a difference. Donate today to support journalism that brings Israel’s story alive.
SUPPORT ISRAEL21c
Read more on:   Culture, Independence Day, Independence Hall, War of Independence, Knesset