There was great excitement at the Hula Valley Park and Nature Reserve. The night before, 30,000 cranes had flown in, and the lush nature reserve in Israel’s Upper Galilee, an important migratory point between Africa and Israel, was teeming with birds.

Inbar Rubin, our guide, had been up with other members of the Hula staff at 4:30am to count the birds as they rose up into the sky in huge lines at the crack of dawn. It was now almost 12 hours later, and in between Rubin had studied for six hours, and was back with seemingly unflagging energy at the park.

Lake Hula is a unique nature destination. Some 500 million birds migrate through the Great Rift Valley, the longest and deepest rift valley in the world, every spring and fall as they make their way to and from breeding sites in Europe. It’s one of the most important flyways in the world, and the Israeli reserve is a vital stopover for the hungry and tired birds.

For the visitor, Lake Hula is unforgettable. You can walk the park, cycle or take a Safari wagon, going at your own pace along the pathways of the reserve. Birds of every description — pelicans, storks, eagles, buzzards, cranes — are everywhere. In the water, in the fields and in the sky, circling lazily in huge undulating columns. Of the 500 species of birds in Israel, 390 of them have been spotted here.

The park is beautiful to visit at any time of day, but the peaks are at dawn, when the birds lift en masse into the air, and at sunset when they take to the sky for the night gathering. 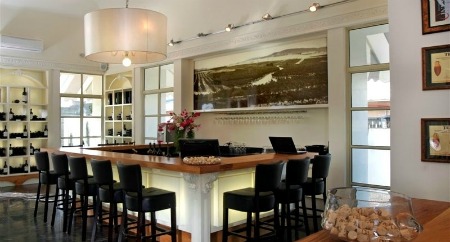 The tasting room at Adir Winery.

Rubin took us to a spot on the northern side of the park, and as the sun slipped pink and gold behind the mountains, tens of thousands of birds rose up into the air in a cacophony of noise and motion as they looked for safe roosting spots for the night.

Up high, more birds were arriving, including a flock of 300 or so pelicans that gradually descended from their elevated migratory path in slow, graceful spirals to take refuge in the park and build up strength for the long journey ahead.

Postcard-pretty and lots to do

Our visit to Lake Hula came as part of a two-day tour of the Upper Galilee sponsored by the Keren Kayemeth LeIsrael-Jewish National Fund (KKL-JNF). The rolling hillsides and valleys, and spectacular views over the Sea of Galilee and the Golan Heights, lead many to consider this one of the most beautiful and romantic parts of Israel.

Though immensely popular with Israeli tourists, the Galilee is often overlooked by travelers from abroad who prefer to stay in the center near Jerusalem, Tel Aviv and the Dead Sea. It’s a missed opportunity. Aside from its obvious natural beauty, the Galilee offers a wide variety of other experiences, and it’s not that far away. The trip takes about one-and-a-half to two hours from Tel Aviv. 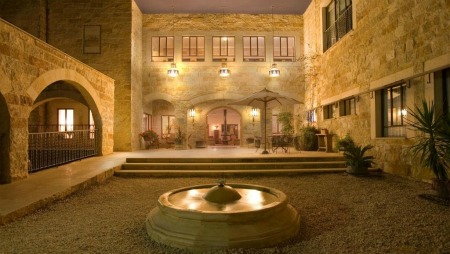 Bayit Begalil was built as a labor of love by an Israeli couple.

There’s art in postcard-pretty communities such as Rosh Pina; Jewish mysticism in the hilltop city of Safed (Tzfat); adventure sports ranging from rafting and kayaking to cycling, climbing and hang gliding; nature trails and wildlife; excellent restaurants and wineries; and also significant Christian sites like Mount Precipice, Capernaum, the Mount of Beatitudes, the Sea of Galilee and two new hiking trails, the Jesus Trail and the Gospel Trail.

The region is also developing new tourism projects including a 20-kilometer scenic road that the KKL-JNF and local regional councils have created in the 5,000-acre Biriah Forest, the largest planted forest in Israel’s North. 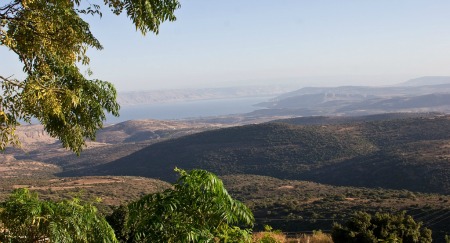 Photo by David Franko
The views over the Sea of the Galilee at Amirey Hagalil are spectacular.

“The goal of the road is to create a tourist infrastructure so that local people will be able to build some economic activities on the basis of this,” says Aviram Zuck, KKL-JNF’s forestry supervisor for the Upper and Eastern Galilee and Golan Heights.

The route passes fascinating spots including viewpoints over the Golan Heights, memorial sites, historical locations and archaeological ruins of synagogues. It reaches nearby Meron, a mixed forest full of firs, pines, cypress trees and oaks, and one of the oldest and most beautiful planted forests in Israel.

The road will be called the Righteous Path because of the many ancient synagogues and graves of religious sages along the way. “The Galilee was the physical, spiritual and natural center for Jewish life in the first century CE,” explains Zuck.

Deep in the heart of the Biriah Forest, for instance, is the tomb of Rabbi Yonatan Ben-Uziel, who lived in the region some 1,600 years ago. Every year, thousands of pilgrims visit the site to seek blessings, making his grave the second most visited in Israel.

If you want to get off the beaten track, a new 22-kilometer track for off-road cyclists has just opened. Jeep trips are available throughout the forest area, leading you into a jungle of wild dirt tracks. The forestry organization also plans a massive series of high-canopy zip wires, reminiscent of the ones in the jungles of Costa Rica. 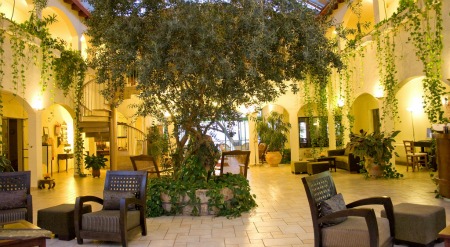 The lobby at Amirey Hagalil.

When you find yourself growing tired of nature, you can stop off at one of the many excellent wineries in the region for a tasting session. Today the Upper Galilee is one of the top wine-producing areas of Israel. The climate is perfect — long hot days and cool nights. In the last 20 years the Israeli wine industry has gone through a revolution, moving from sickly sweet Kiddush wines to sophisticated reds and whites that win top international prizes.

Adir Winery is one of a number of new boutique wineries making a name for itself both locally and internationally. Located on the slopes of Admon Mountain, the winery was founded by two families, the Rosenbergs and the Ashkenazis, who were neighbors. They planted vineyards in the 1980s and established the winery in 2003.

The grapes are hand-selected, and the fine wines — cabernet sauvignon, merlot, and chardonnay — are only produced in the years when the harvest is considered good enough. The winery’s Plato series received four prizes in the Terravino 2008 and sells throughout Israel, North America and Europe.

The same families run the Adir Dairy, which makes goat milk, cheeses and ice cream. The dairy, which opened in 1995, has a herd of 2,000 milk-bearing goats — the largest in Israel. Visitors to the winery’s center in Dalton can learn about the history of the vineyard, and taste the wines, cheese and ice cream for NIS 10 per person.

A trip to the Upper Galilee wouldn’t be complete without a night at one of the region’s growing number of boutique hotels. Perhaps the best known are Bayit Bagalil, Vered Hagalil and Amirey Hagalil, all of which share high standards, top-notch food and spectacular views.

Set up high on a pine-covered hillside near Rosh Pina, Bayit Bagalil in Hazor Haglilit is a lovely, peaceful place. The elegant hotel was built 10 years ago as a labor of love by an Israeli couple from Herzliya. They lived in the hotel and the fixtures and fittings were all a reflection of their own tastes.

The only problem was that the owners were a little too select in the clientele they allowed, preferring tourists rather than visitors from Israel. They were also apt to throw guests out if they didn’t like the furnishings. After three years they went out of business, and the hotel was purchased by Richard Cohen, from the US.

Today the hotel has 26 large and beautiful rooms, all of which include private Jacuzzis. The hotel, which is often booked by groups, has a five-room spa, a dining room serving kosher food, a pool and a Jacuzzi in the garden. The hotel’s large grounds offer quiet places to sit and enjoy the view. Children under 16 are not allowed, except during the holidays.

Vered Hagalil is not just a boutique hotel, it’s also a ranch. While it has the facilities of a regular hotel, including a gourmet restaurant serving local delicacies, a swimming pool with a panoramic view of the Sea of the Galilee and a spa, guests stay in private, secluded lava-rock-and-wood cabins dotted carefully along the hillside of the 30-acre site.

The ranch, which was featured in the book 1000 Best Places to See Before You Die, offers a riding school and horse therapy for children with disabilities. “Many families come to the hotel year after year. The children take part in three-day horse-riding courses, while the parents relax and take it easy,” says Ilan Rom, manager of the ranch. “It’s a hotel with a feeling of a zimmer [B&B].”

The ranch hosts tourists walking the Jesus Trail, and also organizes horseback trips along the trail.

Amirey Hagalil Boutique Spa Hotel is located on the road winding up to Safed. With its archways, stone floors and the olive tree at the center of its lobby, it’s a welcoming place to stay or even just to eat. The hotel may be located next to the vegetarian village of Amirim, but the restaurant serves specialty meat dishes cooked with the flavors and spices of the local area.

The hotel, which has a breathtaking view over the Sea of Galilee and the Golan Heights, has 17 rooms and a spa with a wide range of treatments. The Olive Tree Treatment, developed at the hotel, includes massage and holistic healing using local olive oil. And if all that isn’t relaxing enough, the Jacuzzi must have one of the most spectacular views of all Jacuzzis in Israel. The hotel is open to children over the age of 12.

The author was a guest of KKL-JNF.

UNCOVER ISRAEL - Get the ISRAEL21c
Weekly Edition free by email
Sign Up Now!
Bring Israel's story to life.
Millions of people around the world rely on us to gain a deeper understanding of Israel. We are the trusted source for original content you won't find anywhere else.
You can make a difference. Donate today to support journalism that brings Israel’s story alive.
SUPPORT ISRAEL21c
Read more on:   Travel, Upper Galilee, Things to do in Israel, Hula Valley, Birds in Israel