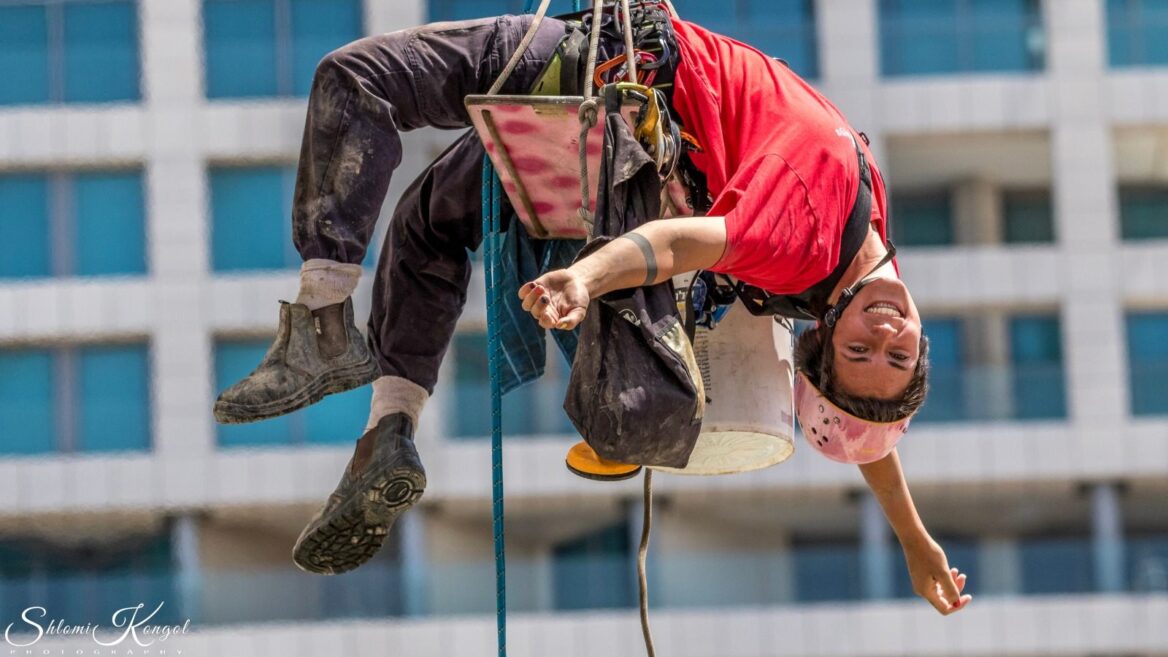 Noa Toledo getting into the swing of things. Photo courtesy of Shlomi Kongol

Take one talented dancer, add some panoramic views and a good dose of high-rise thrill, and you’ve got all the ingredients necessary for online success.

“It just felt natural to me,” Toledo says of her TikToks. “Sometimes I take a break on the rope and I just whip my phone out.”

A former pole vaulter – and Israeli champion for her age group – Toledo delights her fans with her fun dance moves while strapped into a harness alongside a skyscraper.

Her online hits have garnered millions of views and include her singing and dancing along to the music atop of highways, an empty Ben-Gurion Airport, beachfront locations and skyscrapers.

She was recruited to her unusual job while working at a climbing wall, where she was spotted by her current boss who was taking his kids climbing.

“I’ve been in the field for a year already. I do all kinds of high-rise jobs,” she says. “And at the same time doing TikToks in the air.”

Prior to hanging off buildings for her company, A.B. Working High, Toledo took a course to specialize in high-rise work, but admits that the whole height thing is not a big issue for her.

“It really doesn’t scare me and it actually feels really natural to me,” she notes. “I truly love the height and I love that I can see everything, that I can look out – there’s crazy views from up high.”

As a woman working in a predominantly male profession, Toledo is adamant that change is underway.

“There are women in the field, a small amount compared to men, but I feel that a lot of people are becoming aware of the field,” she says. “There’s no difference. A woman can also do it.”

Toledo says that alongside endless questions about whether she’s afraid to do her job, the responses to her work have been overwhelmingly positive.

“I’d be happy for people to simply see that women carry out these jobs, that not all physical work is the preserve of men,” she concludes. “You’ve just got to dare, and of course not to try this at home.”