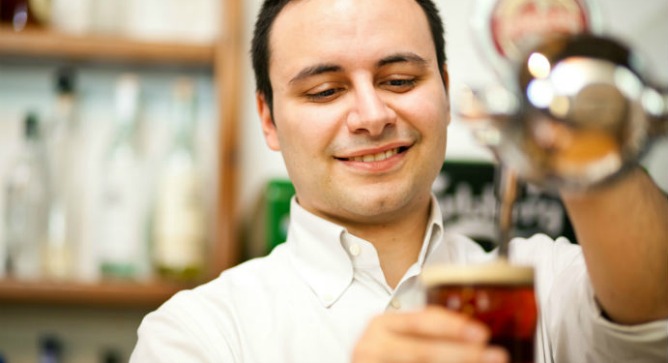 Keeping track of beer on tap. Image via Shutterstock.com

You know that bartender who’s always giving free samples and a “little extra” to his best customers? Well, he’s a problem – for the bar owner, that is.

“Over-pouring and theft are very big issues in the nightlife business,” explains Ori Fingerer, co-founder and vice president of business development at Weissbeerger, one of Tel Aviv’s most unusual high-tech startups. The company aims to be the Google Analytics — of beer.

Weissbeerger’s flagship product, Alcohol Analytics, aims to track how much beer is being consumed in a bar, at what times, and which brands are the most popular. It works by attaching monitors to the beer taps. How much flows through which taps is recorded, analyzed and sent wirelessly to the cloud, where the bar owner can view what’s happening in real time through a mobile iPad app.

And because the Weissbeerger product is also hooked up to the point-of-sale system (i.e., the cash register), it can compare how much beer flows through the tap with the amount of money collected.

“It can say, for example, that last night, the bar poured 80 liters of beer, but received money for only 50 liters,” Fingerer explains, adding that Alcohol Analytics can help owners reduce theft and waste by up to 12 percent.

However, spying on bartenders is not the main purpose of the system. Weissbeerger can bring to any place where beer is consumed – bars, hotels and restaurants – the same tracking and marketing smarts that supermarkets and stores have long had with “off-trade” brands (the business term for products that are not bought and consumed in the same place).

In a convenience store, for example, a beer manufacturer knows exactly how many cases were sold and when. “They can use this to determine the best way to market their brand, or to come up with what’s the perfect combination to sell more,” Fingerer says.

In the “on-trade” side of the business, however, there has been no such transparency. Draught beer is not a bad place to start. “It’s a 500-billion-dollar-a-year market,” Fingerer says.

Once they know what customers are buying and when, bar owners can get even smarter.

“For example, if they know that average sales for Maccabee beer on Sunday nights is six liters, they can incentivize their personnel to say – if you can top that, I’ll give you some kind of bonus,” Fingerer says.

Or, if sales are slow, the publican can enable staff to offer instant “happy hour” pricing. Big Brother cuts both ways, it seems.

The Weissbeerger “smart tap” does something else that beer lovers will appreciate: It can measure how long a keg has been open.

“After four to five days open, a beer keg is not considered fresh,” Fingerer explains, “and most breweries don’t want to serve their beer if it’s not the highest quality. Our system will send an alert when it’s time to replace the keg.”

Fingerer points out that Weissbeerger is being marketed to both bar owners and big beer manufacturers and breweries that need and appreciate the new data. 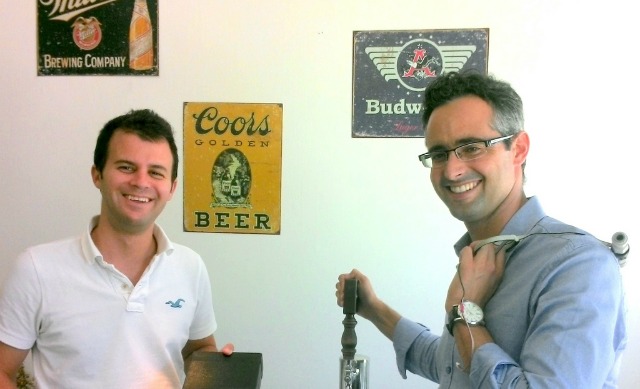 Ori Fingerer, left, and Omer Agiv are turning beer analytics into a business.

There are 20 locations in Israel now running Alcohol Analytics. Earlier this year, the company was named one of four finalists (out of 600) in a startup competition sponsored by European enterprise software maker SAP, which claims some of the largest breweries in the world as clients. SAP is making introductions for Weissbeerger, Fingerer says.

Weissbeerger started with a very different product in 2009: a table with a keg and cooler underneath and a self-service tap on top. Customers pour their own beer and the system presents a bill at the end for exactly the quantity consumed.

“You don’t need a waiter; you don’t have to order a half or third liter up front,” Fingerer says. You just pour a small amount of always chilled beer whenever the spirit moves you.

The so-called “WeissTap” system, which the company has installed in 10 locations in Israel, means no more beer getting left over, warm or stale in a glass. And it can lead to an increase in sales of up to 120 percent per customer. “Customers drink smaller amounts at a time, but altogether it comes to more than they originally intended to drink,” Fingerer says.

For a truly far-out look into the future, Weissbeerger offers the “WeissPour” for other types of alcoholic drinks. This wireless device attaches to the top of a bottle and monitors what the bartender dispenses, resulting — the company claims — in an increase in sales of 35 percent and a 15 percent decrease in over-pouring.

Fingerer, 31, was a lawyer before he started Weissbeerger with CEO Omer Agiv. The two have known each other since their army days. Fingerer can’t recall where exactly the idea came from. Too much beer, perhaps?

“Weissbeerger” is the CEO’s grandmother’s maiden name. It doesn’t hurt that it translates loosely as “white lager” in German. (Germany is also one of the company’s target markets and a small advance team is already there.)

Weissbeerger charges a monthly fee – Fingerer wouldn’t say how much – plus some complex metrics involving percent of saved waste and increase in sales. Suffice it to say that, despite the good-time feel of the company (“We only hire people who love beer,” Fingerer insists), this is every bit a business and none of the company’s eight employees is getting paid through free samples.