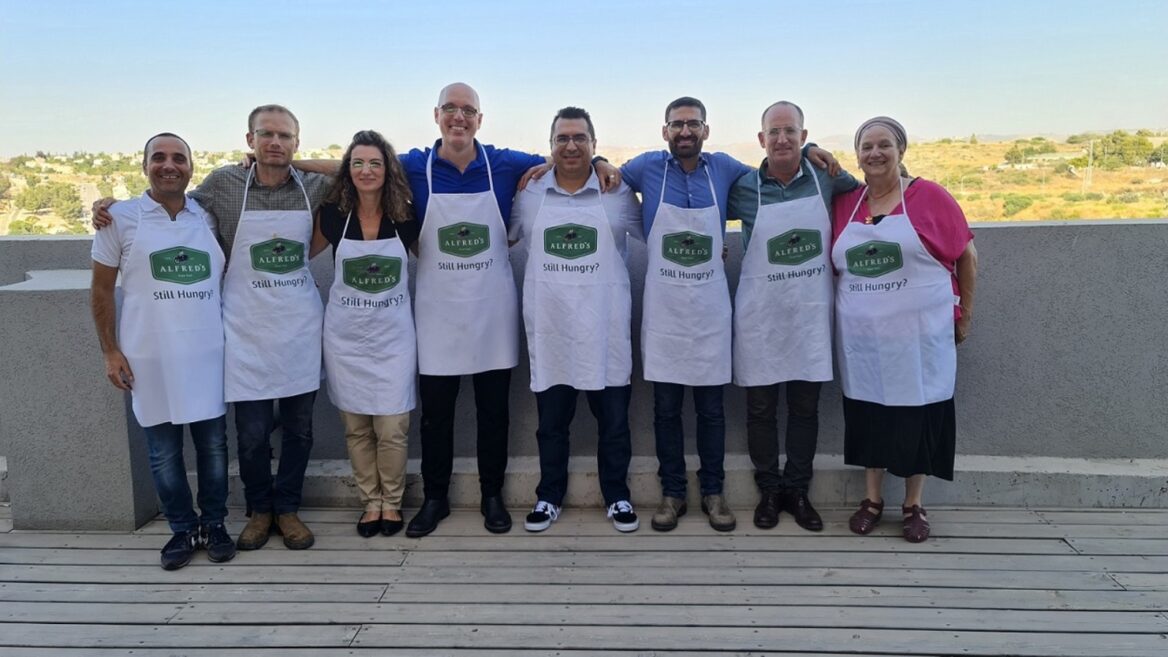 What is the recipe for meat and dairy without cows? Snacks and sauces with less sugar and salt? Long-lasting fresh produce and compostable food wrappers?

A fast-growing, climate-threatened world is hungry for such recipes. Appropriately enough, the search began in the kitchen — or rather, The Kitchen.

The world’s first food-tech hub was launched in 2015 by The Strauss Group, one of Israel’s largest food producers, as part of the Israeli Innovation Authority’s Technological Incubators Program.

Today, The Kitchen has 22 portfolio companies cooking up innovations to feed the world more efficiently, sustainably and securely.

But The Kitchen is no longer alone: Governmental, corporate and academic food-tech labs and incubators are opening across Israel. The number of food-tech startups has risen to approximately 400.

“Our agricultural knowhow, which is one of the wonders of the world, and our technological knowhow that we have built in the past 40 to 50 years. Put them together and you’ve got breakthroughs on a global scale.”

Tel Aviv research firm IVC found food-tech garnered $432 million in investments in 2020, less than sectors such as cyber and fintech, but growing fast. “Success stories attract more entrepreneurs into the field,” says The Kitchen’s Zaidman, who was scheduled to speak at the Food Biotech Congress November 8-11 and at the first global virtual food trade show, November 21-24.

“Israel is a very entrepreneurial country and both new and serial entrepreneurs are always thinking about the next big thing. They see food-tech is an impact area on environment and health,” says Zaidman.

“Maybe they were hesitant before when looking at the money going into sectors like cyber, but now they see they can get capital investment in food-tech that can be game-changing.”

“Startups like [cultivated steak pioneer] Aleph Farms don’t even have products in the market yet. But what they are doing is so amazing they get a lot of attention.”

Breakthroughs on a global scale

One of the Israeli companies already making inroads in the global market is InnovoPro. Its proprietary process transforms chickpeas – the humble nourishing basis of hummus — into a neutral-tasting protein concentrate for foods and beverages.

InnovoPro has factories in Canada and Germany, and a new subsidiary in Chicago as it launches a chickpea TVP (texturized vegetable protein) for plant-based burgers, nuggets and meatballs. Migros, Switzerland’s largest retailer and supermarket chain, uses InnovoPro’s product in a dairy-free yogurt.

“Hummus is a Middle East product. You take the technology and combine it with Israeli knowhow and – boom — you’ve got a successful food-tech company,” says Zeevi.

“Five years ago we came to the Galilee and wrote a plan to transform this area into a food-tech and ag-tech center with the involvement of municipalities, service providers, investors, academies and research institutes across the Galilee. The government gave it a budget of 500 million shekels,” says Zeevi.

One portfolio company, DynaFresh, was established by Migal post-harvest experts to optimize the shelf life of fresh produce.

“Margalit Startup City is where everything converges at a physical hub and meets the international and business sector,” says Zeevi.

Unlike cyber and fintech, a food-tech company not only needs skilled scientists and technicians but also, after scaleup, factory workers. Not only existing VCs are investing in food-tech. Israel also has Millennium Food-Tech, an R&D partnership started in June 2020 and traded on the Tel Aviv Stock Exchange.

“There was no specialized vehicle in Israel for the post-seed food-tech startup with proven technology waiting to be piloted and commercialized,” VP Business Development Yossi Halevy tells ISRAEL21c.

“So we built a VC dedicated to food-tech. This is a sector that is untouched.”

Halevy, a certified public accountant formerly with E&Y in Tel Aviv, became interested in venture creation in food and agriculture four years ago, when “the ecosystem was in diapers,” he says.

So he jumped at the chance to join his old friend, former Fresh Start director Chanan Schneider, in Millennium Food-Tech.

‘We work with Nestlé and other major food companies,” Halevy tells ISRAEL21c. “It’s a triangle relationship: We use their knowledge for our due diligence, and they use ours for investment and proof of concept.”

Halevy sees ingredient development as one of Israel’s strongest capabilities because it maximizes the country’s well-honed, well-connected multidisciplinary talents.

“Israel is unique from many aspects, but most significant is that everyone knows everyone,” he points out.

“That’s very helpful in food-tech because it has so many disciplines that need to be combined — innovation, entrepreneurship, biotech, physics, chemistry, robotics, computer vision, artificial intelligence. You can easily assemble a team and cross-mine ideas and development.”

The food-tech scene in Israel is expanding like a yeasty bread dough into many sectors, from corporate to academic to nonprofit, with governmental participation sprinkled in.

International Flavors & Fragrances, a US-based multinational with operations in Migdal HaEmek in northern Israel, runs the FoodNxt incubator in partnership with the Israel Innovation Authority. 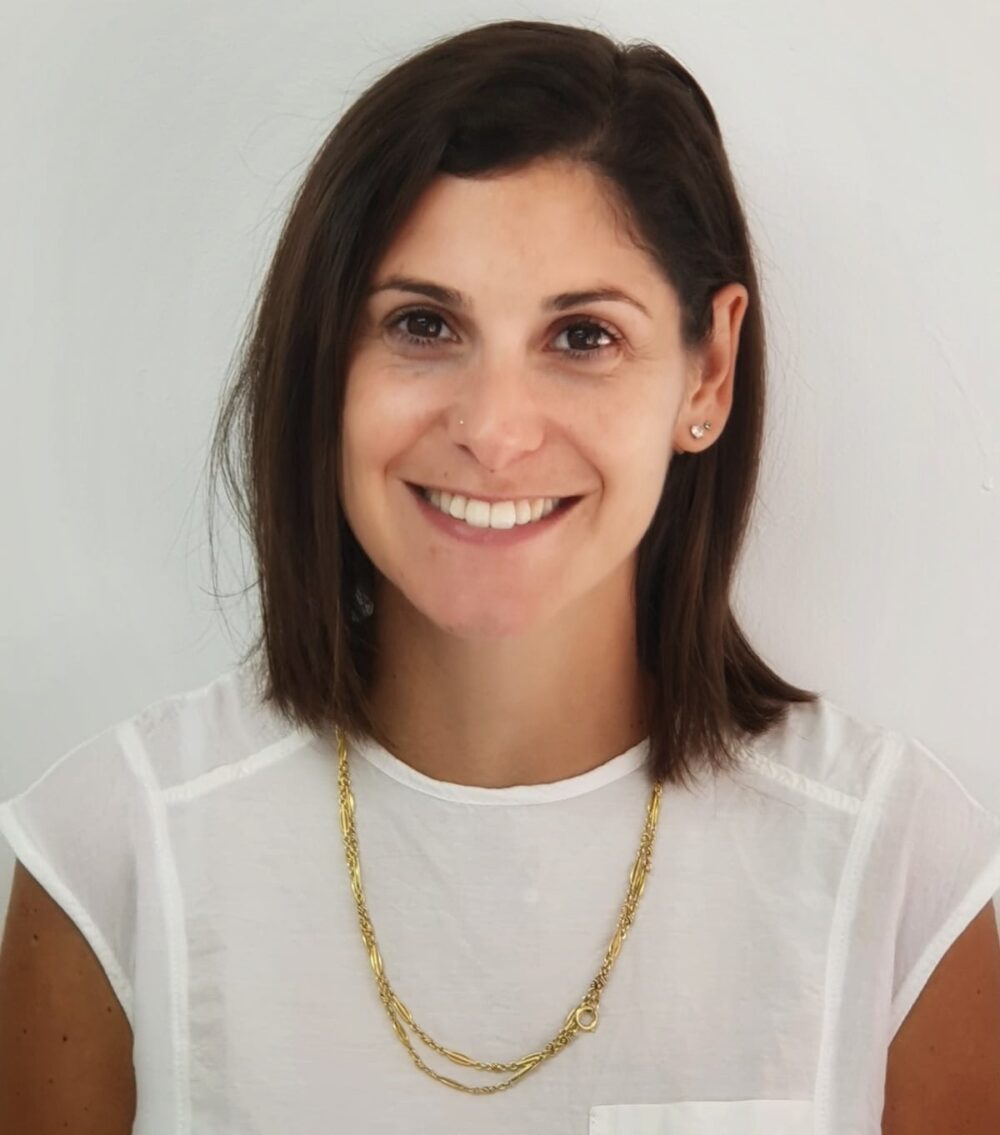 Salt of The Earth, a global Israeli company in the North founded in 1922, has teamed up with Tel-Hai College for multiple projects, such as testing ingredients at the college’s analytical lab.

Tel-Hai students recently were challenged to create innovations emphasizing sodium reduction and flavor enhancement. They were guided by Salt of The Earth R&D technologist and application manager Rakefet Rosenblatt, a food science graduate of Tel-Hai.

“We always think about what we can make better,” she tells ISRAEL21c. “Salt is a known product; how can we help the industry use it in a smarter way? Students have great ideas and it’s good to invest in them.”

One group proposed a salt product enhanced with mineral-rich seaweed, using a special process to neutralize the seaweed’s strong flavor and color. Another group developed a savory vegan snack based on chickpea flour and Salt of the Earth’s Mediterranean Umami Bold flavor enhancer. At the opposite end of Israel, down south in the Negev town of Rahat, seven major companies with a regional presence, such as SodaStream, Netafim and Dolav Plastic Products, joined with academic and VC partners in the IIA’s InNegev incubator for food-tech, ag-tech, clean-tech and Industry 4.0.

“This is our first year of operation. We’re mostly doing venture creation now, utilizing the capabilities of our partners in the Negev,” says Amir Tzach, InNegev’s VP Business Development & Investments.

Among food-tech innovations under consideration at InNegev are post-harvest sensors – one that detects bacteria and another that detects soft rot in potatoes early enough so that the bad potato(es) can be removed before the rot spreads.

In the hot field of alternative protein, InNegev is looking at companies in the South engaged in algae production, and may assist local meat-processing facilities in converting space for alt-protein production. 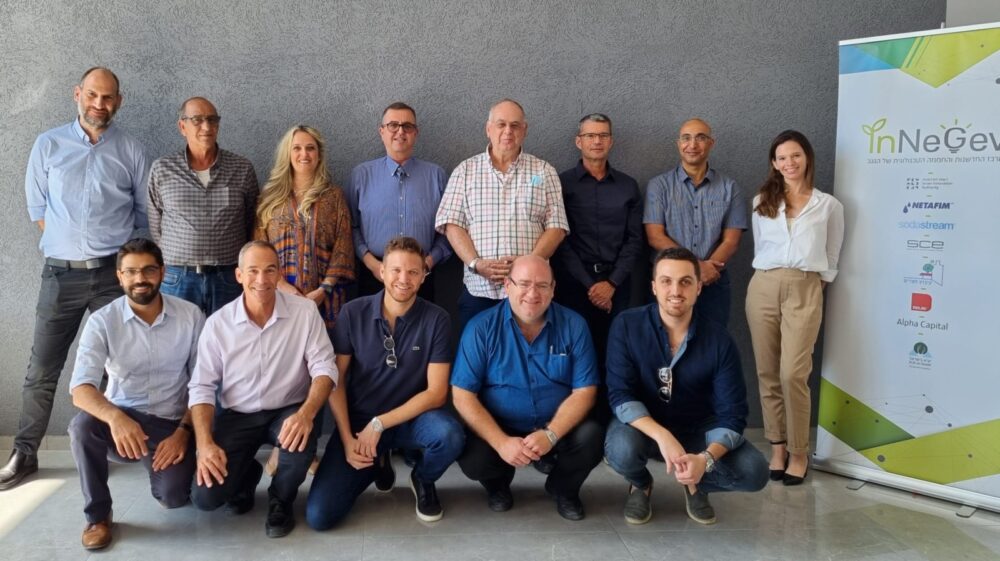 Going back up north, the Carasso FoodTech Innovation Center was inaugurated in September at the Technion-Israel Institute of Technology in Haifa.

Prof. Marcelle Machluf, dean of the Technion Faculty of Biotechnology and Food Engineering, said that the Covid-19 pandemic “has only emphasized the importance of food and biotechnology in maintaining our existence and meeting future existential challenges. To address the many challenges in this field, including access to healthy, affordable food and innovative medical treatments, we need advanced infrastructure that will enable the integration of new engineering and scientific tools.” Fighting food scarcity for the future “Technologies that have the potential to either improve crop yields or transform, preserve, and tailor foods with improved functional and nutritional values will ensure a stable supply of food in the future,” said Hasson.

The Kitchen’s Zaidman predicts that as the sector matures, we’ll see more segmentation.

“For example, Aleph Farms started working on cultivated meat before there was any existing technology. A lot of the innovation we’ll see in the next two to three years will be much more specialized in certain aspects that support this industry,” he explains.

“In terms of global trends, alternative proteins will continue as a strong trend because we’re just scratching the surface of consumer interest. There’s a lot of potential in alternative dairy, seafood and eggs.” 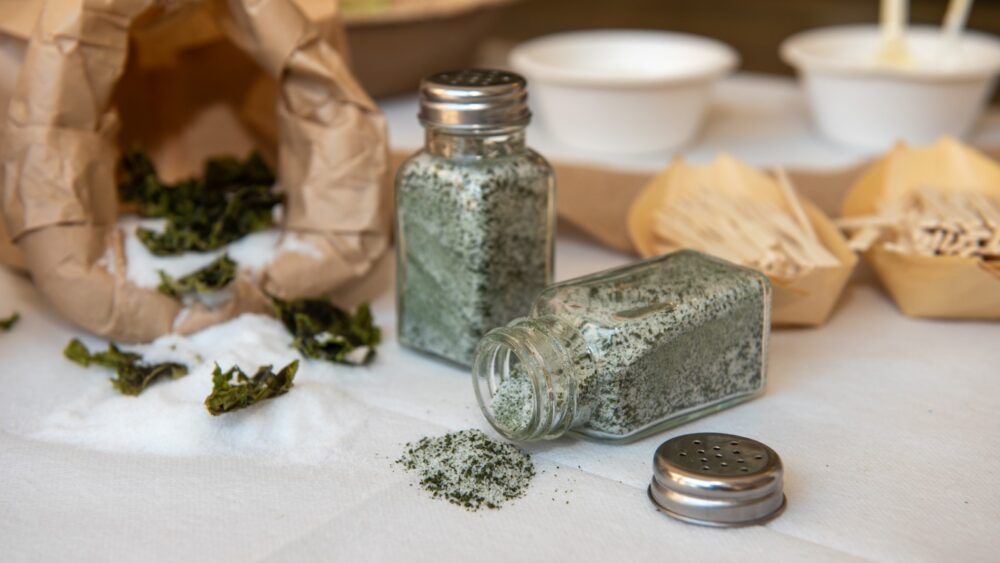 Salt enhanced with mineral-rich seaweed is an innovation created at Tel-Hai College. Photo courtesy of Salt of the Earth

One of the newest ones, Alfred’s, offers an innovative platform for producing plant-based whole cuts for the meat, poultry, meat analog and cultivated meat industry.

“Israel now ranks second in the world behind the United States in its total number of fermentation and cultivated meat companies,” Oren notes.

“With governmental support in this industry, Israel, which currently exports only five percent of the food it produces, could become a global supplier of raw materials and advanced production technologies for alternative proteins,” he says.