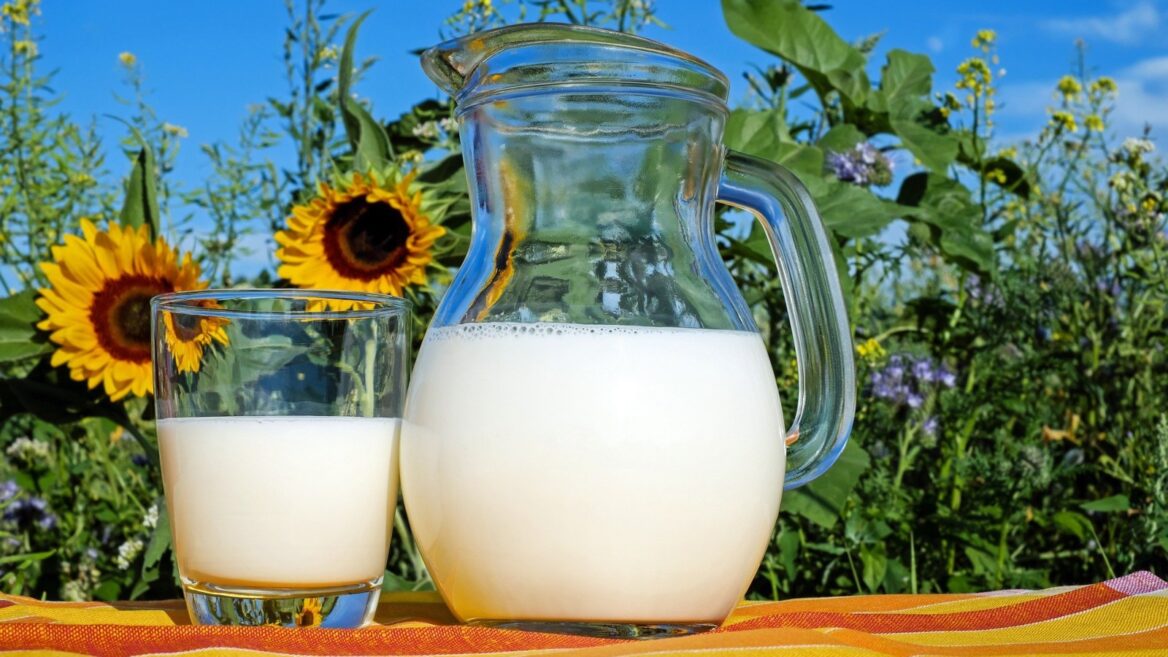 Image by Couleur from Pixabay

“We’re not looking to replace the dairy industry but help them transition to a more sustainable way of feeding a growing population.”

Just 3 percent of consumers identify as vegan. Yet plant-based alternatives account for about 15% of milk sales worldwide. What’s pushing this growing market?

Industry insiders say the main driver is flexitarians – people interested in reducing, not eliminating, consumption of animal products. They’re motivated by concerns for their health and for the suffering and environmental damage caused by animal farming.

Flexitarianism is the fastest-growing dietary demographic today. Recent surveys show 36% of American consumers and 23% of European consumers are flexitarian.

But flexitarians aren’t totally in love with plant-based milk and cheese.

It’s not just that the taste differs from the cow’s milk most people are raised on. It’s also about performance. Plant milks, for example, don’t foam perfectly for cappuccino.

One of The Kitchen’s first portfolio companies was cultivated meat startup Aleph Farms. Back then, says The Kitchen CEO Jonathan Berger, cultivated dairy didn’t seem technologically or economically feasible. Nor did they see consumer or investor interest.

A few years later, they did. 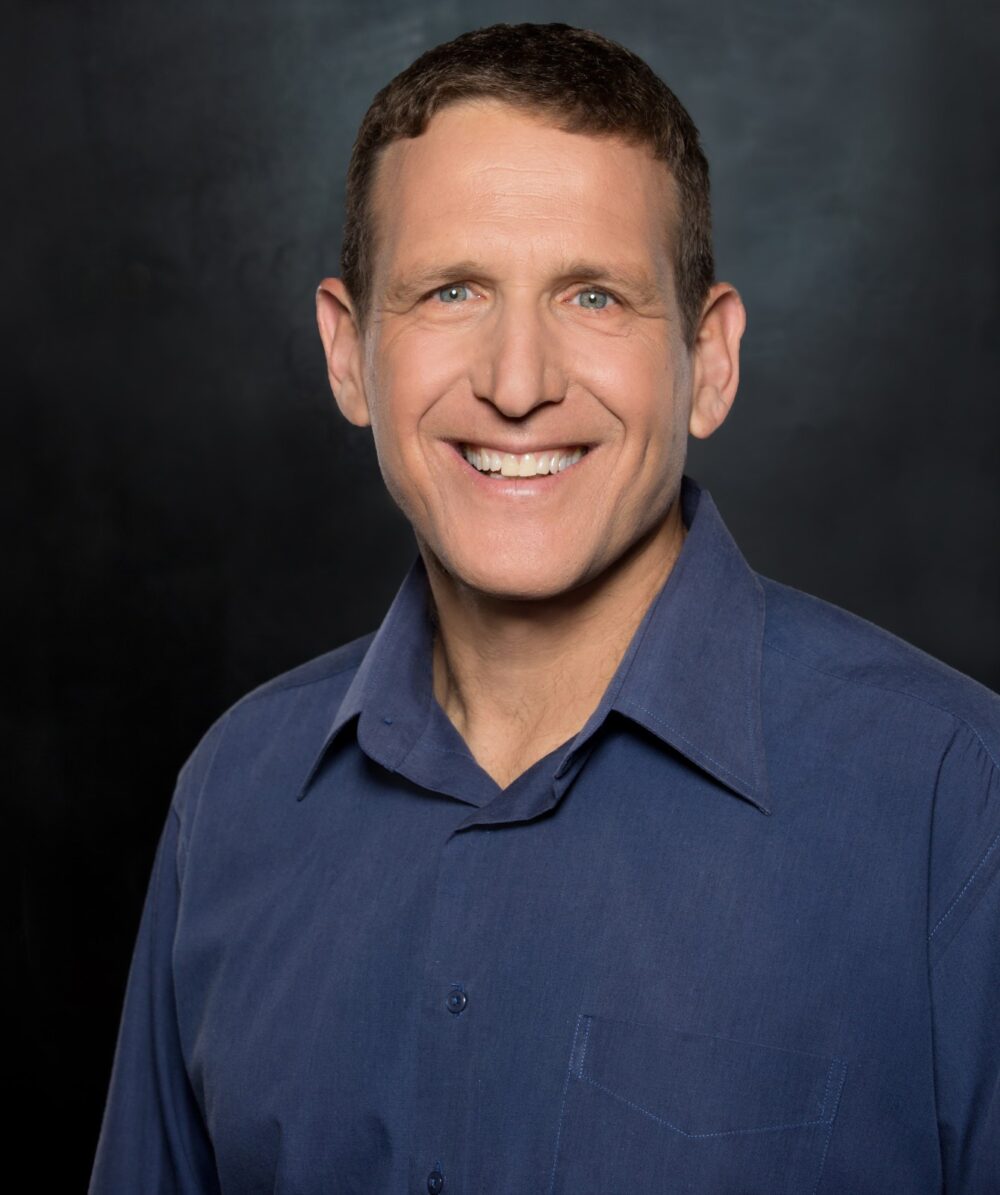 Jonathan Berger, CEO of The Kitchen. Photo by Tal Shachar

“We saw the capabilities from the cultivated meat sector diffusing toward other sectors. And we saw that a company like Perfect Day was something investors believed in. This gave us the courage to put our dollars into something so unconventional like real milk with no cows,” Berger tells ISRAEL21c.

“About a year and a half ago, we found the right technology and started to build a company.”

That company, Imagindairy, is developing whey and casein proteins through precision fermentation of yeast.

Using these proteins in products such as cheese or yogurt would offer “all the important nutritional values of cow’s milk with the same taste, aroma and texture, but without the suffering that is caused to cows and without damage to the environment,” cofounder Tamir Tuller told ISRAEL21c.

The startup raised $1.5 million in seed funding and recently signed a joint development agreement with The Strauss Group, The Kitchen’s sponsor and one of Israel’s largest food manufacturers. 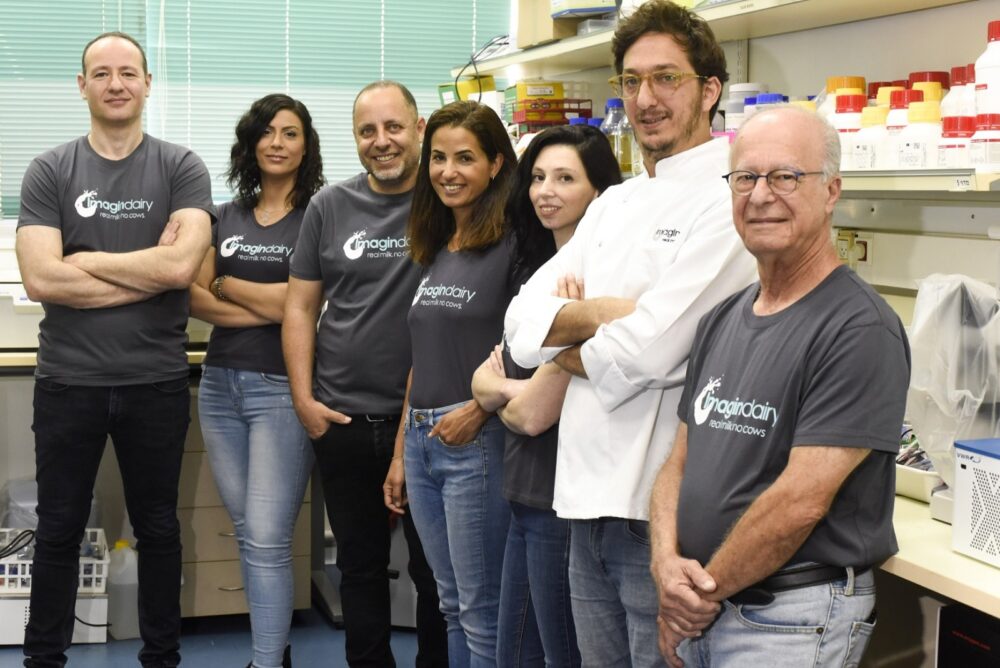 The Imagindairy team. Photo courtesy of The Kitchen

The future of milk

Why would Strauss, whose product portfolio is heavily cow-based dairy, invest in yeast-based or plant-based dairy?

“This gives Strauss access to the future of milk,” a Strauss spokeswoman explains.

The company believes dairy milk is here to stay, but because non-dairy milk is growing, Strauss is investing in alternative milk startups and giving them the benefit of its knowledge from the dairy industry.

Strauss also was a seed investor in Fantastic Farms, which is engineering plants to make milk proteins. It’s operating in stealth mode at the PentaLab incubator.

Fantastic Farms cofounders (and brothers) Aviel and Dan Even have research experience in plant genetics and animal biology from Tel Aviv University and the Weizmann Institute of Science.

Aviel Even tells ISRAEL21c: “Our approach enables an easy scale-up and allows the production of affordable dairy products. We aim to improve the world by reducing the devastating damage of animal farming without compromising the original taste of the products.” 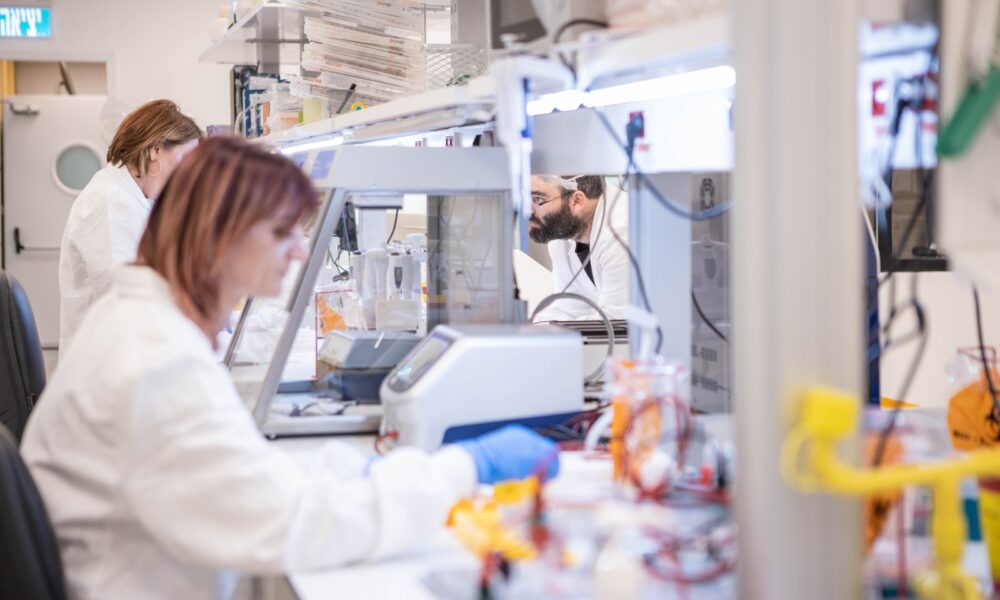 With $13 million of funding and 26 employees working in a new cutting-edge facility in Rehovot, two-year-old ReMilk applies a biopharma technique of microbial fermentation to produce casein and whey.

“Therapeutic proteins are high value and produced in small quantities. We aim to produce large quantities of milk proteins at a cost low enough to compete with real dairy,” says Jason Rosenberg, head of business development at ReMilk.

“We’ve successfully produced the milk proteins and products using them. The next step is scaling up.” 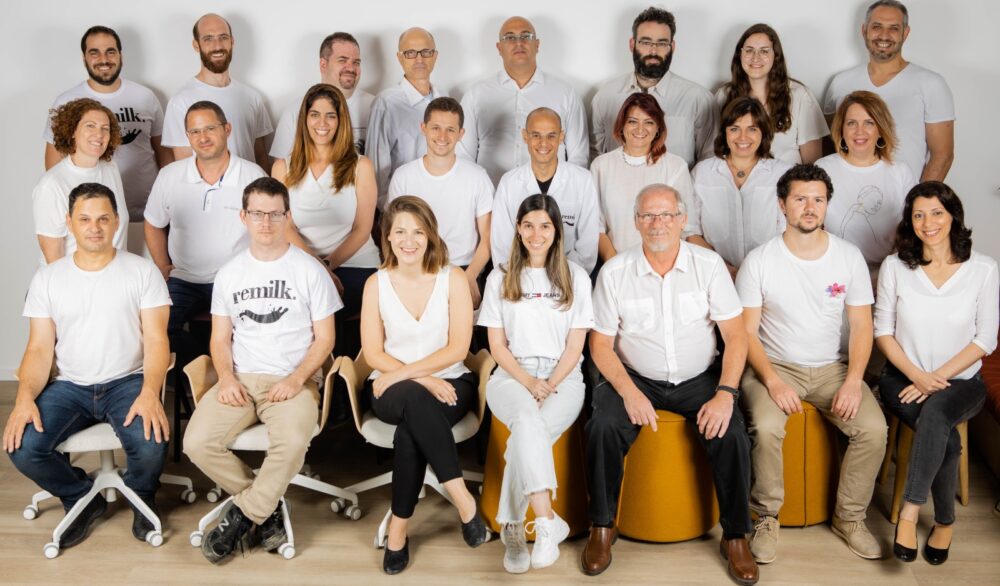 The ReMilk team in Rehovot. Photo by Tal Zelicovitch.

Rosenberg notes that ReMilk and its competitors root for each other’s success.

“The cultured meat, dairy and seafood sector is an extremely collaborative ecosystem in Israel,” he tells ISRAEL21c. “We share knowledge and help one another address regulatory and sustainability issues. It’s an exciting place to be.”

Cultivated cow’s milk from Israeli startup BioMilk aims for industrial scale-up by 2023. A unique cultivated breastmilk product could be next.

Rather than generating milk proteins through fermentation, BioMilk generates the main components of milk from glandular tissue, initially obtained from mammals but eventually with no reliance on animals at all.

The technology was developed by Prof. Nurit Argov-Argaman of the Hebrew University of Jerusalem, which licensed it to BioMilk in 2020.

“In nature, the mother has epithelial cells in the mammary glands responsible for the secretion of components for the white liquid that eventually comes out to feed her baby,” says BioMilk VP-Business Development Nathaniel Benchemhoun.

“We isolate the cells and put them in a lab that recreates the environment they’re used to. We feed those cells a ‘cocktail’ that enables them to keep growing and multiplying and sends a signal that it’s time to start secreting and creating the components of milk. That platform is going to work in the same way regardless of the source of the cells.” 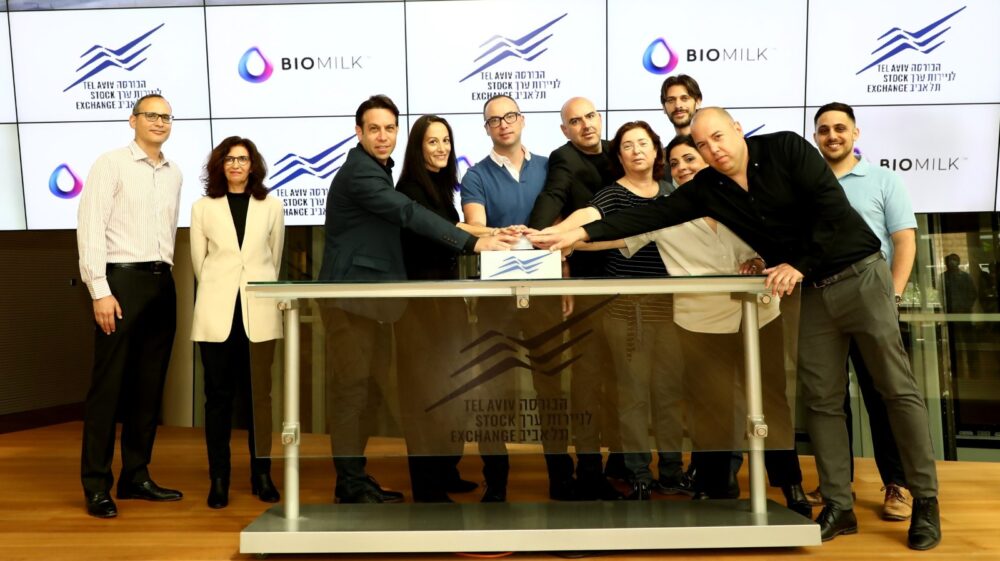 BioMilk, the world’s only public traded company in the cultured milk space, recently signed a strategic investment term sheet with Coca-Cola Israel (The Central Bottling Company). This will provide up to $2 million for BioMilk to continue developing its products in cooperation with CBC. BioMilk will then transfer the products to CBC-owned Tara Dairy for a commercial pilot.

Benchemhoun notes that most milk is used as a raw ingredient for processed foods and even cosmetics and pharmaceuticals.

“The dairy market is huge, and we have multiple plans,” he tells ISRAEL21c. “The main one is to license out our technology so dairy companies anywhere can set up plants with our technology and keep doing what they do. We’re not looking to replace the dairy industry but help them transition to a more sustainable way of feeding a growing population.”

He points out that it takes massive amounts of land to raise dairy cattle and almost 1,000 liters of water to produce 1 liter of cow’s milk. “Our process is much more sustainable, efficient and respectful of the environment and animals.”

BioMilk’s process is applicable to all types of mammals – even, potentially, humans. Cultivated breastmilk could be a lifesaver for premature newborns as the basis for an infant formula free of lactose, hormones and antibiotics.

UNCOVER ISRAEL - Get the ISRAEL21c
Weekly Edition free by email
Sign Up Now!
Bring Israel's story to life.
Millions of people around the world rely on us to gain a deeper understanding of Israel. We are the trusted source for original content you won't find anywhere else.
You can make a difference. Donate today to support journalism that brings Israel’s story alive.
SUPPORT ISRAEL21c
Read more on:   Environment, Health, BioMilk, ReMilk, food-tech, Fantastic Farms, Imagindairy, The Kitchen