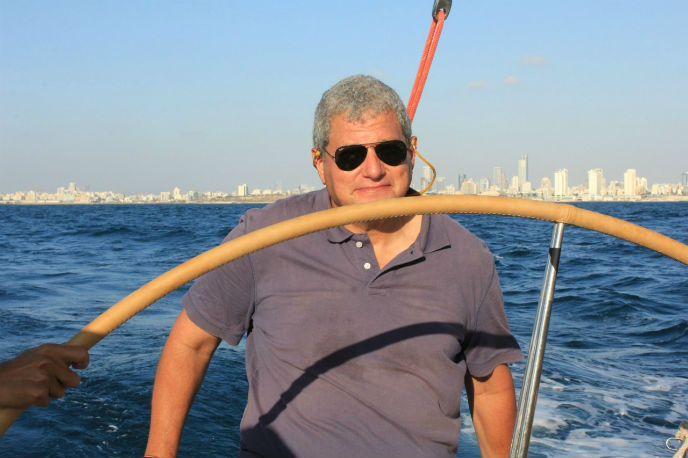 Eric Sirkin on his sailboat.

Eric Sirkin on his sailboat.

When former Apple executive Eric Sirkin sailed from Silicon Valley to Silicon Wadi – figuratively speaking, though he does have a skipper’s license – he harbored a dream of building a multinational company in Israel.

Four years later that dream has yet to be realized, but Sirkin has made smaller waves in Israeli business waters through the  and Tel Aviv Angel Group and the new Maverick Group early-stage venture fund.

He retains a hand on the rudder of the Angel Group’s remaining portfolio startups. Some were bought out, including LabPixies, Google’s first Israeli acquisition. Among the handful of others are the Tomigo  social recruiting platform and the Neomatix  tire-pressure monitor, featured previously on ISRAEL21c.

As chief technology officer for Maverick Group, the 61-year-old St. Louis native nurtures software companies and works with three partners to choose additional startups in which to invest some $20 million from partners in several countries.

He dismisses the notion that Israelis are too impatient and too limited by the small local market to grow sizable corporations.

“In Israel people are always talking about exits, and I cringe when I hear that,” Sirkin tells ISRAEL21c. “I don’t fault companies that have exits, but if you look at small startups that sell out to a US company, who gains from that exit financially? Mostly foreign investors. It’s not servicing the Israeli economy and not creating many Israeli jobs.”

“We’re capable of building large companies, but it requires a shift of mentality,” Sirkin maintains.

“I came here thinking that with my experience I could help build such companies. I have the experience and I’ve been there and done it. Lo and behold, I find that this is part of my dream that is probably not going to happen. I’ve tried no less than three times working with young entrepreneurs sitting on a huge idea and a huge opportunity, but it wasn’t in the cards for a combination of reasons.”

Meanwhile, Sirkin – who holds patents in semiconductor processing, software design, color printing, flat panel displays and communications — is starting his own company (no details yet) and will continue working with Maverick.

“I am still better connected in Silicon Valley but I wasn’t connected in Israel, and Maverick has helped me connect to the industry and find good talent here,” says the former senior director of engineering at Apple.

Sirkin has a doctorate in chemistry from the University of California at Berkeley. On that politically active campus, his strong attachment to Israel began taking root.

“I was there when Zionism was branded as racism [by the UN] and the campus was going totally crazy, from my perspective. I confronted people who probably would have taken my life if they had the opportunity. When you encounter things like that, it hits you.”

Sirkin became involved in the Israel Action Committee, which was so successful in countering anti-Israel sentiment at Berkeley that its members began training peers at other colleges.

“Most of the people who were involved in this are now living in Israel – I was one of the last to arrive — and we’re all still good friends,” he says. “Some from that group, including my close friend Jon Medved [CEO of the OurCrowd VC in Jerusalem], went on to institutionalize the things we created at Berkeley.”

For three years prior to coming to Israel, Sirkin served on the board of the Israel Peace Initiative  on Bay Area campuses. This organization assists students from Berkeley, Stanford and other Bay Area universities who advocate on behalf of Israel. It cooperates with other national Israel advocacy programs for college students, but fills a niche by focusing on local needs.

He has also been involved in the Israel Democracy Institute and the Israel Venture Network.

Sirkin met his future wife while doing post-doc work at the Hebrew University in Jerusalem from 1979 to 1980. Though he yearned to stay in Israel, after marrying in Rome the couple moved to San Francisco.

“After four years working at the Xerox Palo Alto Research Center, I was invited to become a faculty member in the department of applied physics [at Hebrew University], but my wife didn’t want to come back. We had two children at that point. So I remained.”

Professional success did not cloud Sirkin’s Zionist vision. After his marriage ended and his three daughters were grown, he moved to Jerusalem. His Maverick Group partners are his surrogate family.

“Money is money, but it’s the people who make the difference,” says Sirkin. “Many VCs look at the same types of industries and markets we look at. What makes us unique is the four of us.”

Maverick, headquartered in Tel Aviv’s trendy Rothschild district, is headed by Yaron Carni, a seasoned product of the Zell Entrepreneurship Center at IDC-Herzliya, the student business incubator that hatched LabPixies and other notable successes. The team is rounded out by Brazilian hedge-fund manager Michel Abadi and native New Yorker Joe Raby, who has operational and financial-services experience.

“What I love about this country is things change really fast, and more often than not it’s for the better, so people here can have a quick effect on society,” he says. “One of the problems is the schism between the ultra-Orthodox and the ultra-secular, a mutual hate fest that is not constructive to building a great society. I work with organizations that try to bridge that gap.”