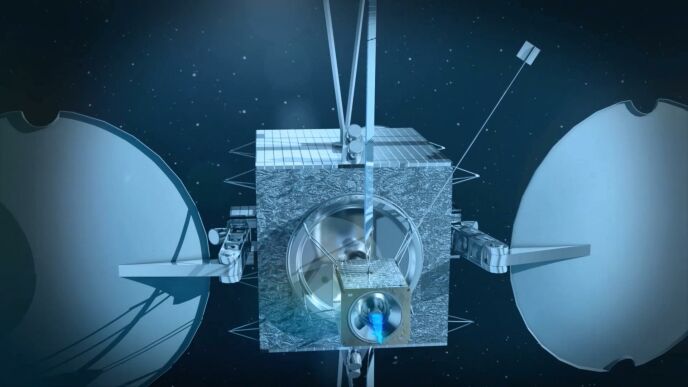 This illustration shows the DeOrbiter 1 microsatellite attached to a much larger communication satellite after the rendezvous and docking process, and pushing it to the "graveyard orbit."

This illustration shows the DeOrbiter 1 microsatellite attached to a much larger communication satellite after the rendezvous and docking process, and pushing it to the “graveyard orbit.”

Wayward communication and navigation satellites – like the two European Galileo satellites that fell short of their intended orbit in late August — could be tugged into position by a novel Israeli microsatellite now under development.

“We could save them,” said Arie Halsband, founder and CEO of Israel’s first private space startup, Effective Space Solutions.

“This is exactly the sort of situation we’ve been anticipating. Our DeOrbiter is a uniquely capable microsatellite, which can also perform rescue missions for renegade satellites. We already performed initial analysis and verified we’re up to it.”

The DeOrbiter will use highly efficient ion propulsion thrusters and a patent-pending system to reach the satellites and move them into the correct orbit.

The problem of misplaced and decaying satellites has plagued the space industry and governments for decades. But it’s not the only problem, Halsband tells ISRAEL21c.

Geo-communication satellites reaching the end of their propellant supply are required to move onto a “graveyard orbit” so that they don’t become space hazards, yet these expensive machines still have plenty of capability left in them that’s getting wasted.

As past general manager of Israel Aircraft Industries’ Space Division, Halsband saw these problems as a challenge to solve with the help of systems engineer Meidad Pariente, who helped design Israel’s AMOS communication satellites. They started Effective Space Solutions in late 2013.

“I’m in the industry many years and I know the needs,” Halsband says. “I had the idea to make a powerful microsatellite, and I focused on the need to extend the life of communications satellites that are sent to the graveyard when they still have between six and nine months of useful life left.”

As an outer-space tugboat, the DeOrbiter is designed to service satellites, keep them “in station” to extend their useful life, monitor them, deorbit them and pull lost satellites back on course. It will have to match the speed of the misplaced satellites, which move at 13,500 kilometers per hour (8,400 mph), and could be spinning.

“DeOrbiter has a sensor to locate a satellite,” Halsband explains. “Then it achieves a rendezvous with the satellite and has a unique grappling and docking mechanism to hold it in place. We put a lot of energy into our microsatellite that allows each one to do these tasks more than 20 times.”

The Effective Space microsatellite is not only more lightweight and cheaper to make than a full-size satellite, but also much cheaper to launch.

This gives the Israeli company an edge over competitors that are designing full-size satellite tugboats, says Halsband, because the price tag for launching a satellite into space is the most substantial cost of the mission – up to $100 million for a complete launcher.

In addition, DeOrbiter’s ion propulsion system is said to be 10-15 times more efficient than that of competing designs.

The company, based in Givatayim outside Tel Aviv, is funded with venture capital and plans to launch its first microsatellite in the last quarter of 2016 or first quarter of 2017, if all goes smoothly.

“We finalized our initial design — all the algorithms, analyses and subsystems — and did feasibility studies. We conducted a market survey to show that the market is there and viable,” says Halsband. “We filed a patent in mid-August and we’re now ready to start marketing. We are approaching the big players, the community of satellite owners.”