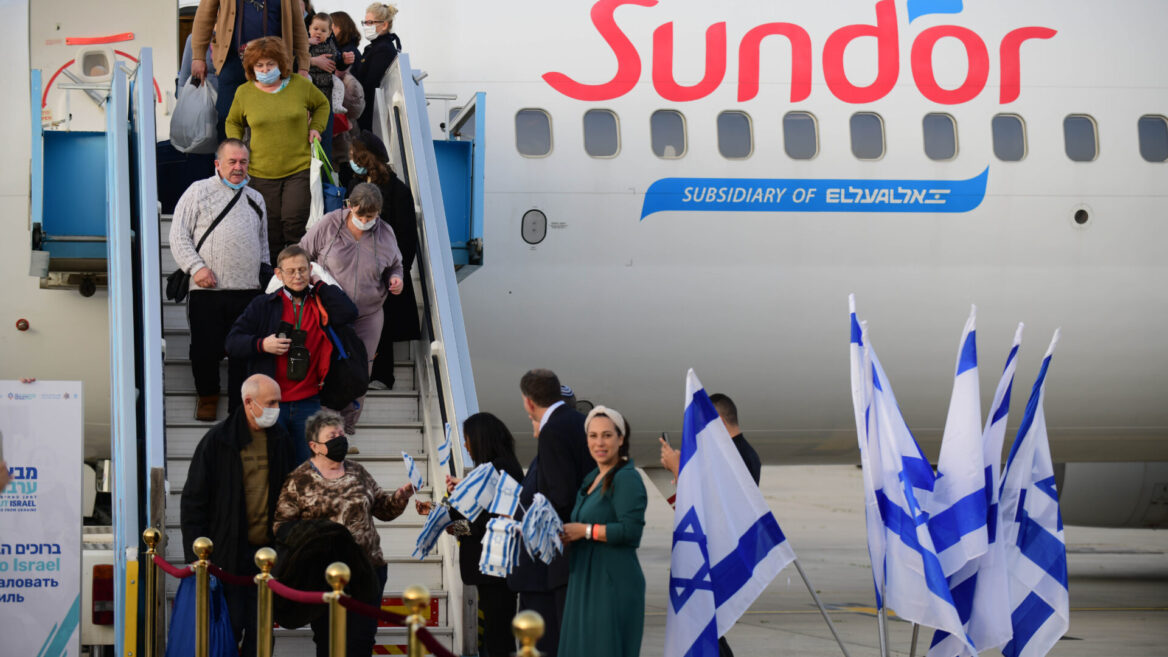 Jewish immigrants fleeing the war in Ukraine, on a rescue flight sponosred by the IFCJ, arrive at Ben Gurion airport near Tel Aviv on March 6, 2022. Photo by Tomer Neuberg/FLASH90 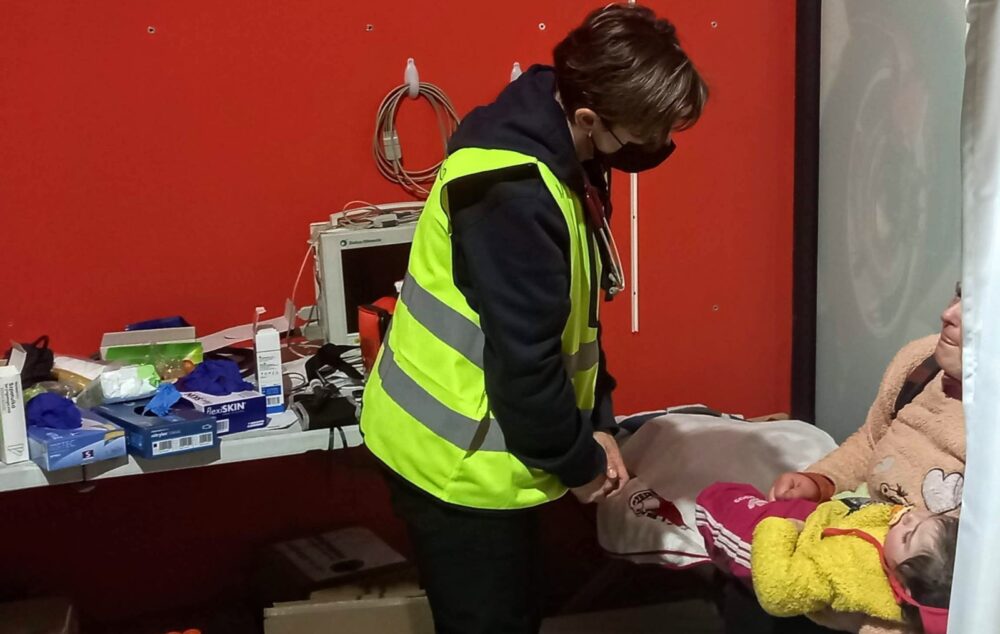 Instead she received a miraculous gift: Her parents, her sister and her sister’s two children managed to cross into Poland that day from their endangered home in Ukraine. Overjoyed, she rushed to Krakow to greet them. 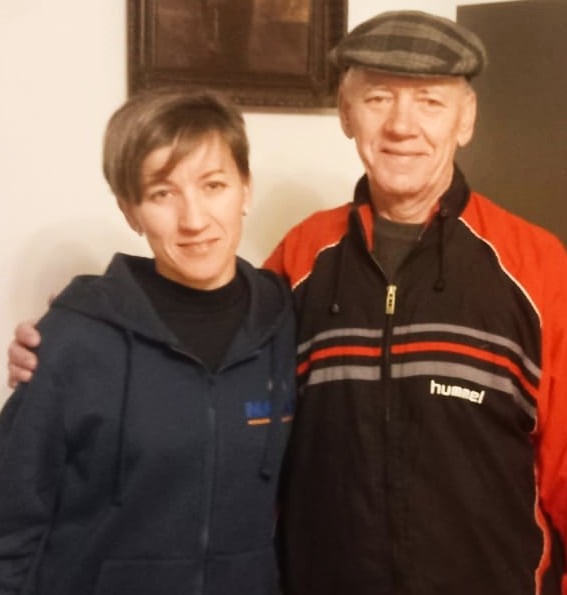 Rotshtein’s birthday miracle exemplifies what is exceptional about the outpouring of Israeli aid for Ukrainians since the Russian invasion on February 24.

Although Israelis always rush to help victims of disasters anywhere — Haiti,  Japan, Mexico, Mozambique, South Sudan,  Nepal, Philippines and dozens of other countries — this time it is highly personal.

Not only are roughly half a million Israelis of Ukrainian descent, but about 26,000 Ukrainian nationals live in Israel and an estimated 300,000 Jews reside in Ukraine, like Rotshtein’s family.

And so, while numerous Israeli governmental and non-governmental organizations are helping all Ukrainian refugees pouring into border countries, the world’s only Jewish country has a special role to play. 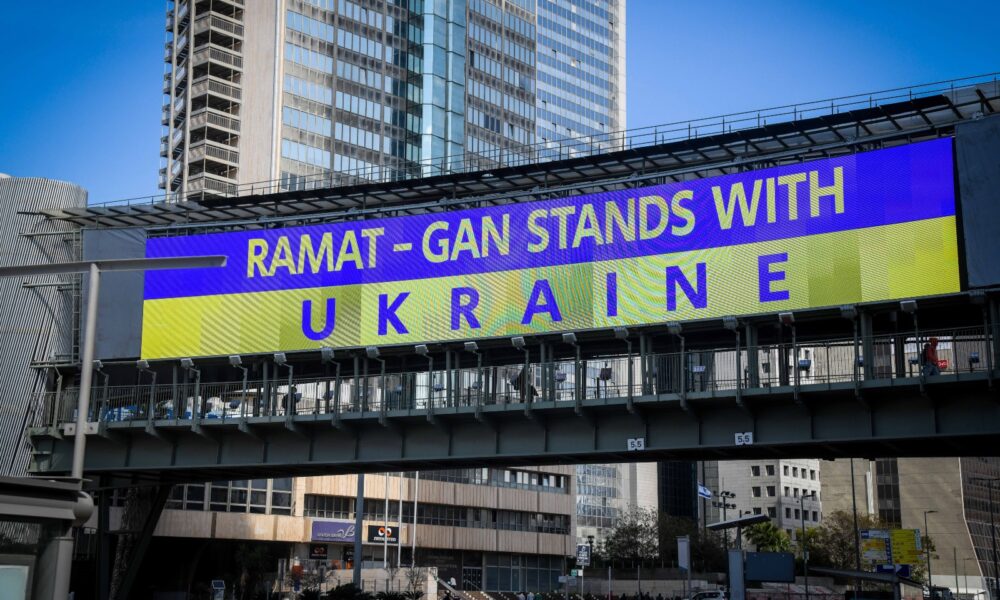 EMT Yechiel Gurfein, a member of United Hatzalah of Israel’s mission to help Ukrainian refugees in Moldova, reports that delegation members were invited to bless the newlyweds at a double wedding in the Kishinev (Chisinau) Jewish community.

“This is a major part of our mission: To remind everyone that all of Israel is responsible for one another and that we are all brothers, and that no one is ever alone, no matter what they are going through,” Gurfein said. 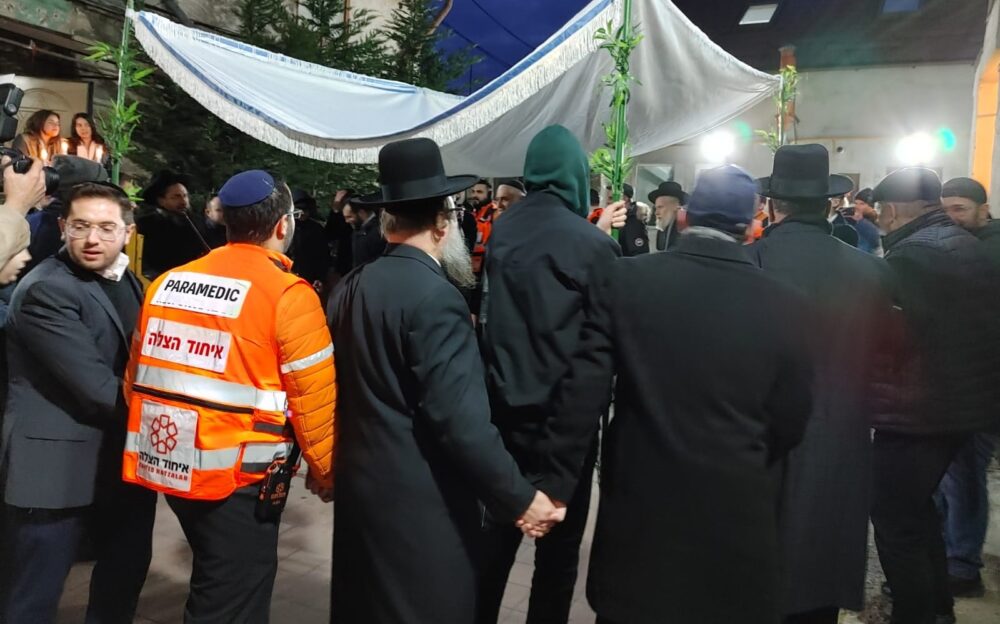 Hagit Krakov, head of mission for IsraAID in Moldova, is of Moldovan heritage and most of her relief team has roots in the area as well.

“We’ve met many people who have family in Israel, both Ukrainians crossing with Jewish heritage and also Moldovans,” said Ethan Schwartz, IsraAID’s spokesman.

Leaders of Israeli NGOs and government agencies noted the outpouring of concern from across the nation.

“We have about 6,000 volunteers and more than 1,000 responded to our call for our first mission to Moldova,” United Hatzalah spokesman Raphael Poch tells ISRAEL21c.

“It was incredible how many volunteers wanted to go from all different communities. Some of our Arab volunteers want to come too but they can’t speak English or Russian. We will try to find a way for them to help.”

Eynat Schlein, head of the Foreign Ministry’s MASHAV international development agency, said, “We received many calls trying to see how people in Israel or NGOs can help the people in Ukraine. MASHAV is looking for a way to channel all of these goodwill attempts and donations and do something significant. … People in Israel are really touched and moved by the scenes that we’re seeing and want to help.”

Posted by Israel Ministry of Foreign Affairs on Monday, February 28, 2022

Israeli NGOs “have chutzpah – they are small but hands-on and work with international organizations to know where the needs are,” says Dana Manor, deputy director of the Society for International Development (SID)-Israel, a 10-year-old humanitarian aid umbrella organization.

Israel-headquartered workplace productivity company Monday.com built a dedicated platform to help SID-Israel and its partner, OLAM, coordinate the efforts of all parties. Israel’s Foreign Ministry also has established a coordination center to deal with the many initiatives to help Ukrainians. 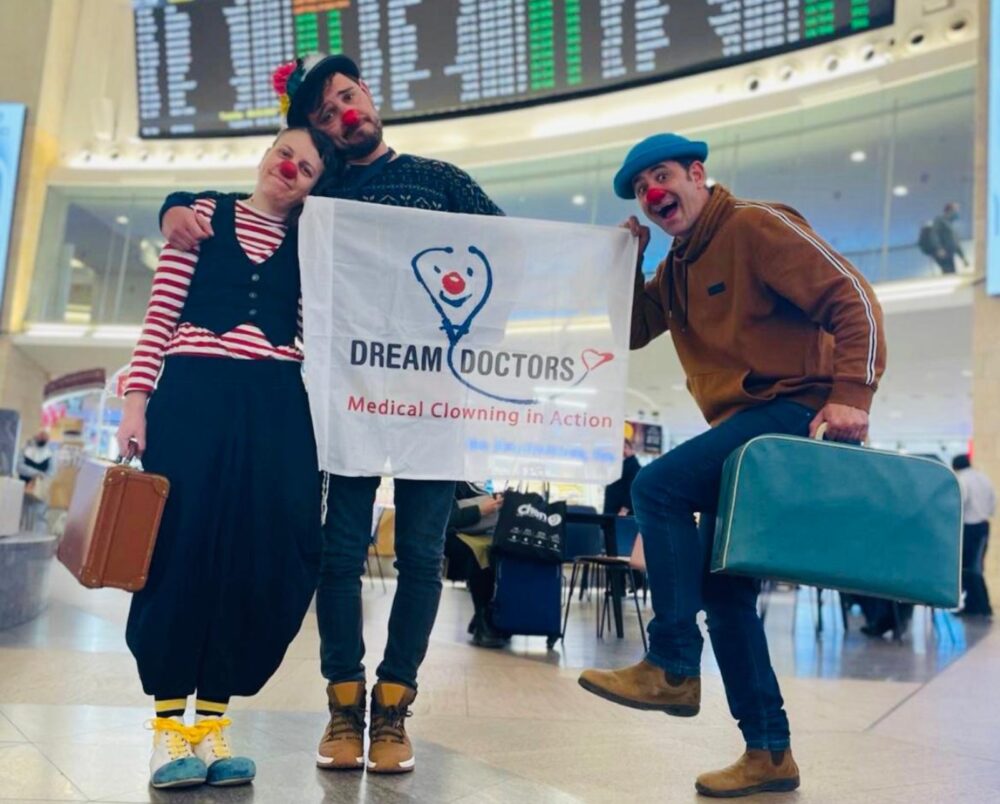 Israeli therapeutic clowns on the way to the Ukrainian border. Photo courtesy of Dream Doctors

“This is what they are trained to do, to deploy to any disaster situation,” Manor tells ISRAEL21c.

Israel has absorbed the most Ukrainians per capita since the Russian invasion than any other Western country without a land border with Ukraine, said Interior Minister Ayelet Shaked.

Some 15,000 Ukrainians could arrive in Israel by the end of the month, “90 percent of whom are not eligible to be included under the Law of Return [having one Jewish grandparent],” she said. The World Zionist Organization is setting up temporary housing.

“Israel is uniquely ready to absorb and give citizenship to the most Ukrainian nationals in the world. This is the very great challenge that awaits us vis-à-vis housing, employment and other areas,” Shaked said.

On March 6, about 100 Jewish Ukrainian orphans landed along with orphanage staffers. They were evacuated with the assistance of the Israeli embassy in Romania, which is aiding Ukrainian refugees of all faiths.

The children were greeted by Prime Minister Naftali Bennett and Minister of Aliyah and Integration Pnina Tamano-Shata – herself a former refugee from Ethiopia — and bused to the KKL-JNF field school in Ness Harim, where local children welcomed them for an expected month-long stay. 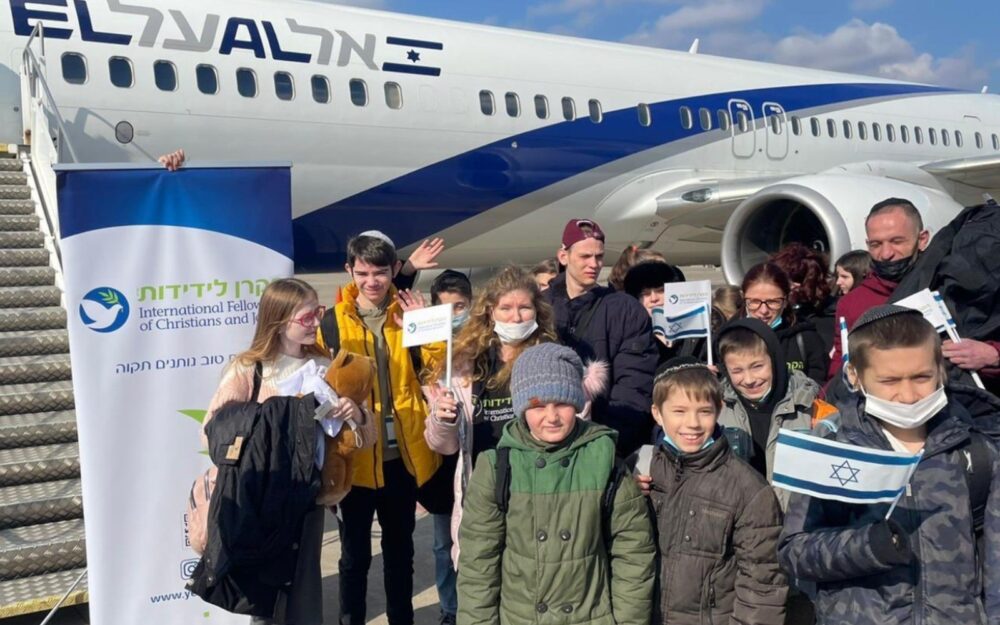 The Jewish Agency for Israel (JAFI), International Fellowship of Christians and Jews, Keren Hayesod-United Israel Appeal, United Hatzalah and Jewish groups and donors from around the world are bringing Ukrainian Jews to Israel.

Hundreds of Jewish and Christian volunteers are assisting refugees on the ground and through a hotline that has received some 16,000 calls. Many callers inquire about moving to Israel, while others are concerned relatives in Israel and refugees within Ukraine, according to JAFI.

JAFI and the Federation of Local Authorities in Israel initiated Torenu (Our Turn), to collect winter clothing and hygiene items from the Israeli public and transfer them to Jewish Agency centers active along the Ukrainian border. 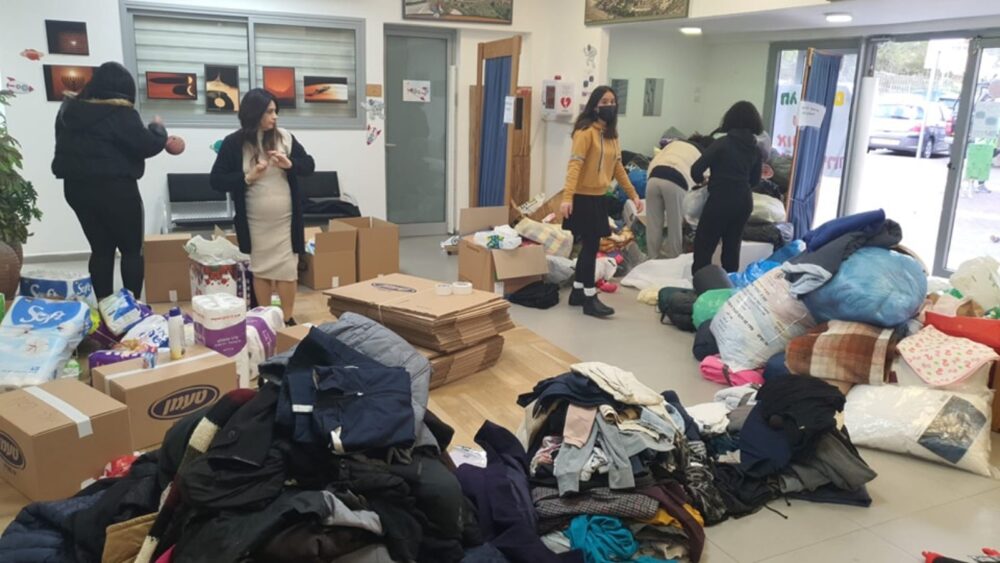 Help on the way

Manor said many Israeli companies and domestic aid groups “are looking to channel help according to the rapidly changing needs in Ukraine and the countries where refugees are fleeing.”

Latet donated food, blankets and winter equipment for distribution by United Hatzalah. Magen David Adom and MASHAV produced first-aid instructional videos in Russian, and is setting up a refugee aid center at its headquarters near Tel Aviv. 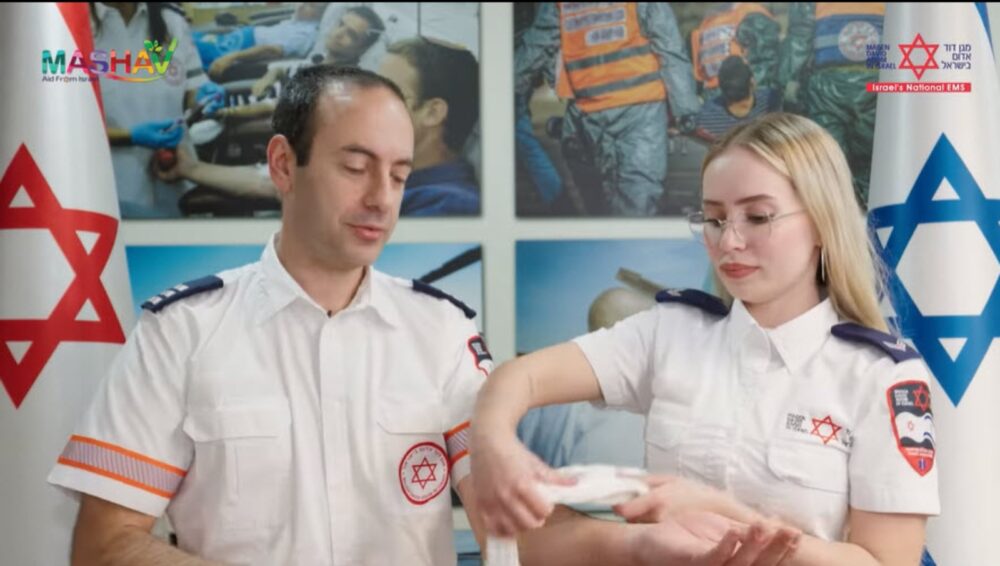 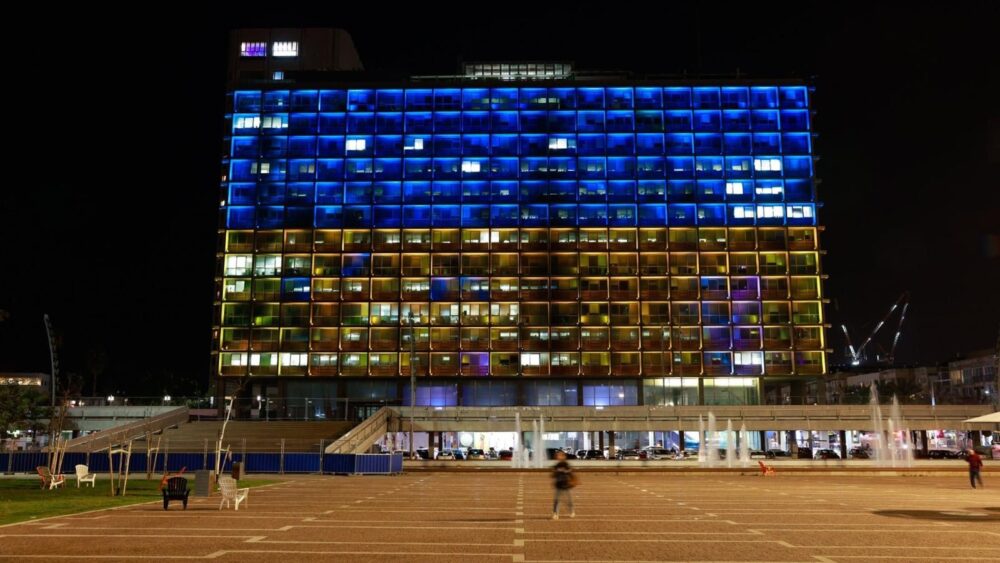 On February 27, 2022, Tel Aviv-Yafo illuminated City Hall building in the colors of the Ukrainian flag. Photo by Guy Yechiely

“I’m really worried about the situation,” said IsraAID’s Hagit Krakov. “All these mothers and children crossing the border need a lot of support, and it’s not going to be ending very soon.”

UNCOVER ISRAEL - Get the ISRAEL21c
Weekly Edition free by email
Sign Up Now!
Bring Israel's story to life.
Millions of people around the world rely on us to gain a deeper understanding of Israel. We are the trusted source for original content you won't find anywhere else.
You can make a difference. Donate today to support journalism that brings Israel’s story alive.
SUPPORT ISRAEL21c
Read more on:   Social Action, Humanitarian Aid, Ukraine, IsraAid, MASHAV, United Hatzalah, NATAN