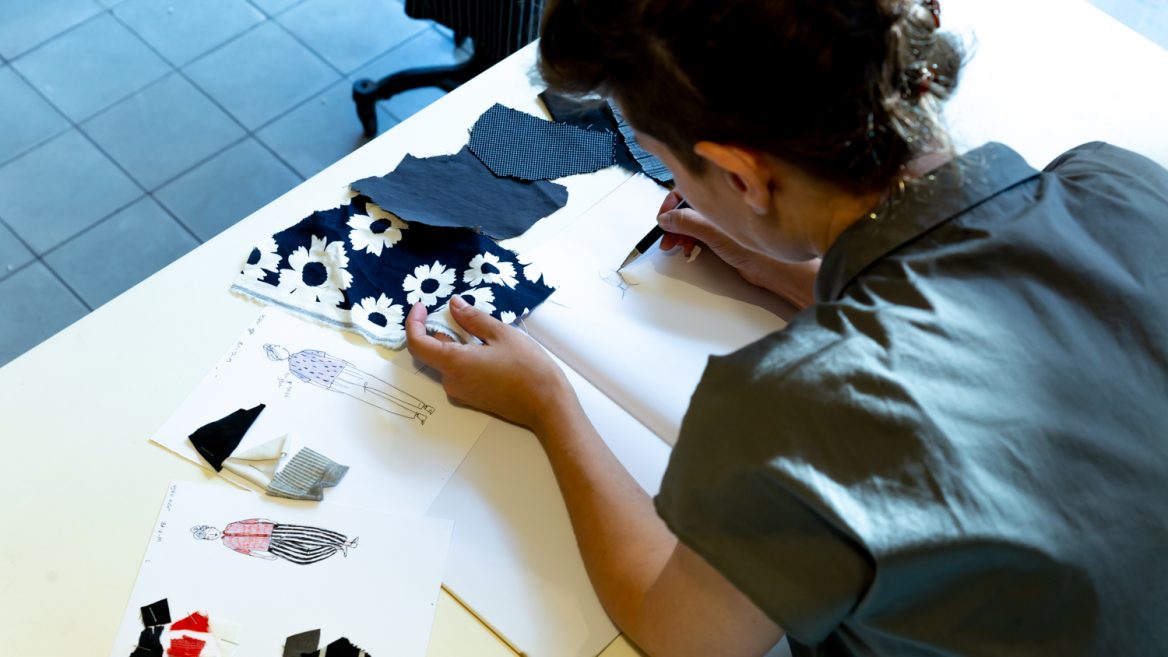 ISRAEL21c recently went on three different, and equally fun, fashion tours in Israel – two in Jerusalem and one in Tel Aviv, all led in English. (For the full story and how you can book your own tour, click here.)

Below we present the stories behind five of the emerging fashion designers we met along the way. 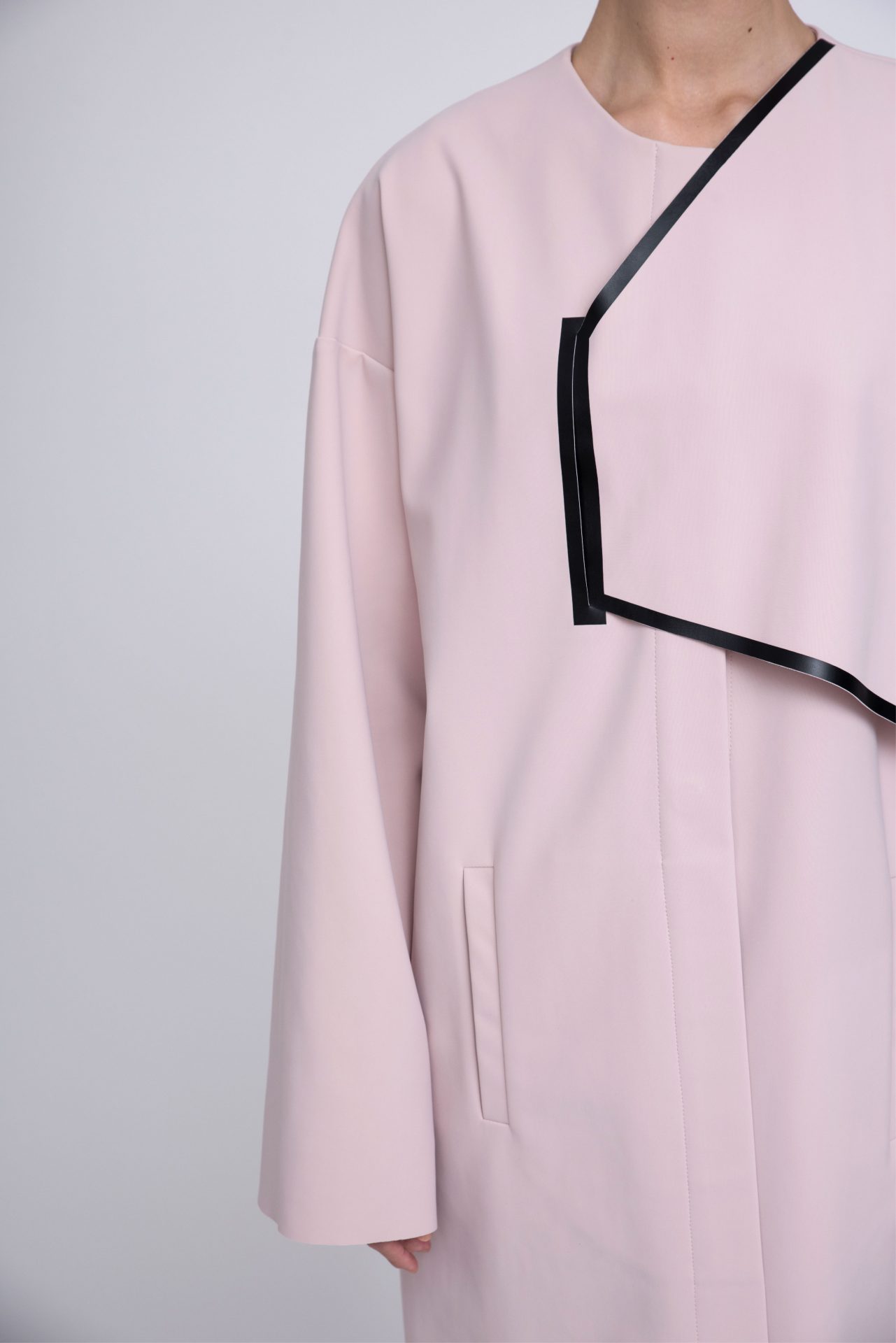 Even before finishing her fashion-design degree at Shenkar College of Engineering and Design three years ago, Adi Benjo was selling items at a New York City shop called Rosebud that featured Israeli designers. Meanwhile, Benjo won a Lottery Council competition two years ago that helped her finish her first professional collection and open her studio in the design-intensive Noga neighborhood of Tel Aviv.

“The concept of my collection is functionality, fabric, fit and color,” she told ISRAEL21c.

Intrigued by origami and Japanese minimalism, Benjo borrowed elements of package design to create unique connectors for her clothing in place of zippers or buttons. She calls it “a new kind of functionality.”

She also creates pieces that complement each other geometrically, using handmade details made from sleek high-quality neoprene, crepe and nylon.

“I offer a wardrobe focused on not overconsuming and minimalism — values that touch all aspects of my business,” Benjo says. “I want my clothing to make people feel chilled out. They’re never too tight and they’re down to earth.” Her target customers are women 30 and up.

Benjo’s designs are available in her studio and online. 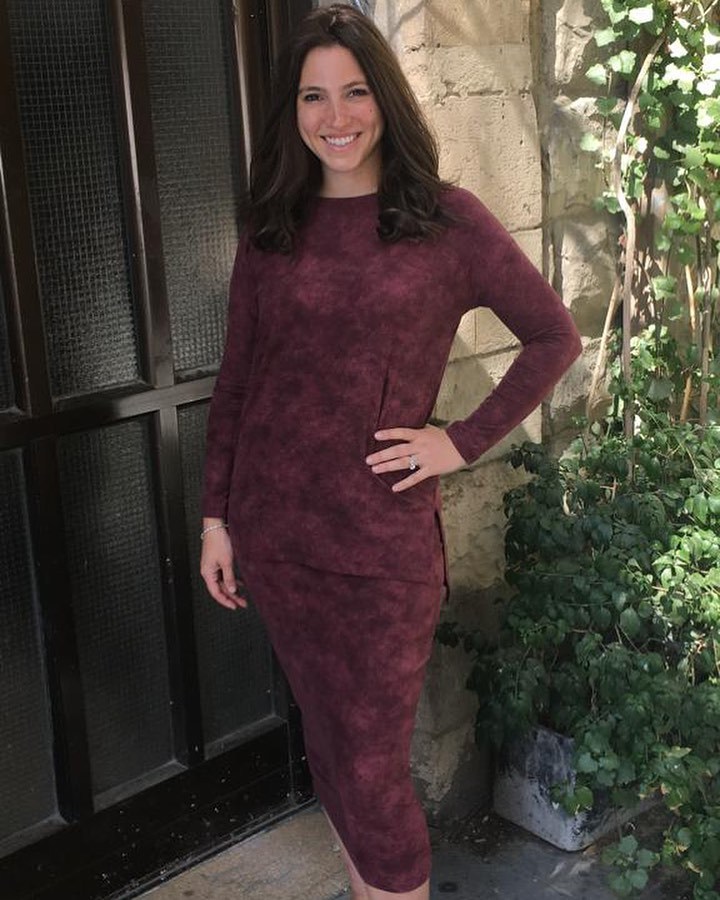 Fashion trends in Jerusalem are increasingly influenced by Orthodox bloggers and designers out to prove that dressing modestly can be dressing stylishly, says Lior Pelleg Dotan of Fashionating by Liri.

A good example of this genre is Daniella Faye, 30, who moved to Israel from Chicago in her teens and in 2015 opened a modesty fashion house, Daniella Faye Ein Sof (Ein Sof is Hebrew for “infinity”), specializing in dresses and headwear.

“My style is modest, chic, beautiful and super comfortable. It’s wearable art; you could frame a piece of it for your wall,” says Daniella Faye, who is self-taught since the age of 13. 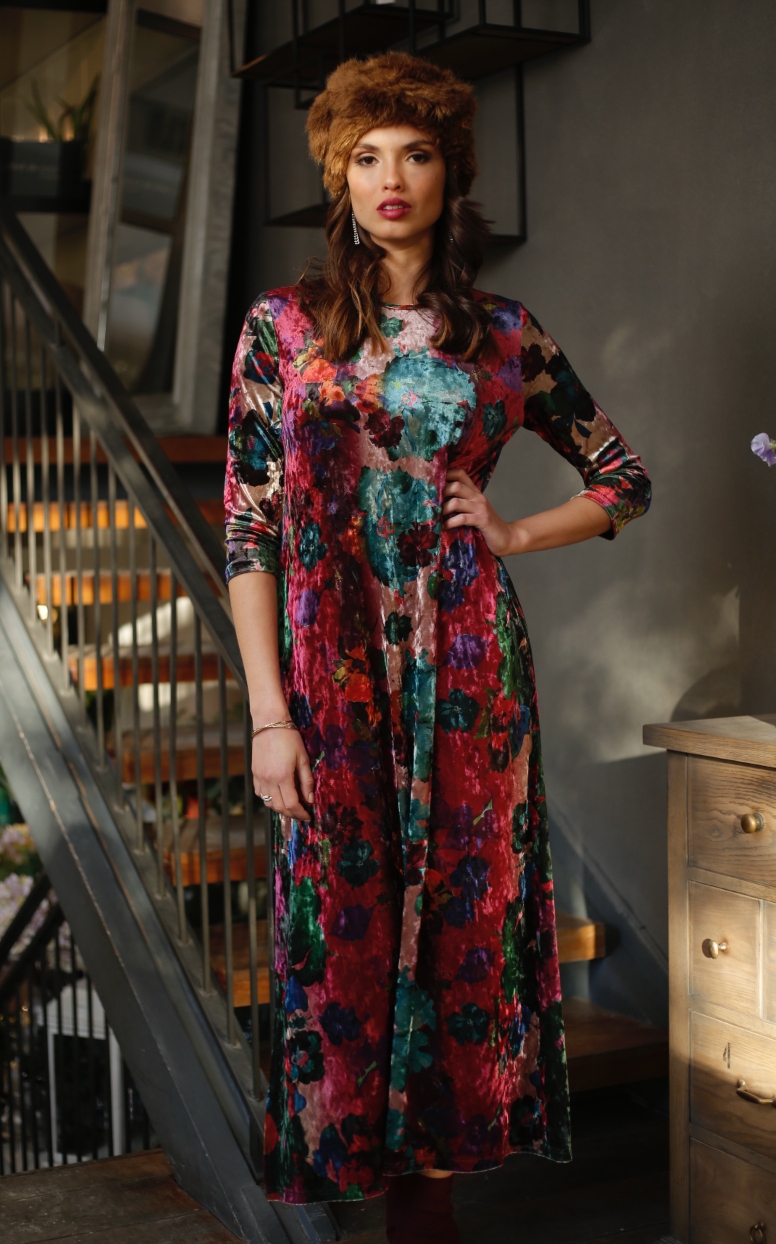 Her clothing and headwear have been available wholesale since 2018 and currently are sold online and in about 30 shops in Israel, New York, New Jersey, Chicago, Baltimore, London and Detroit.

At a recent wholesale buyers’ event in New York she began “testing the waters” for a mass-market line without the longer sleeves and higher necklines in demand by the modesty market.

While many Jerusalem designers trend to black and white, Ein Sof clothing is decidedly colorful, using fine Italian prints and other fabrics sourced from a variety of countries. The head coverings are handmade by Jerusalem seamstresses. 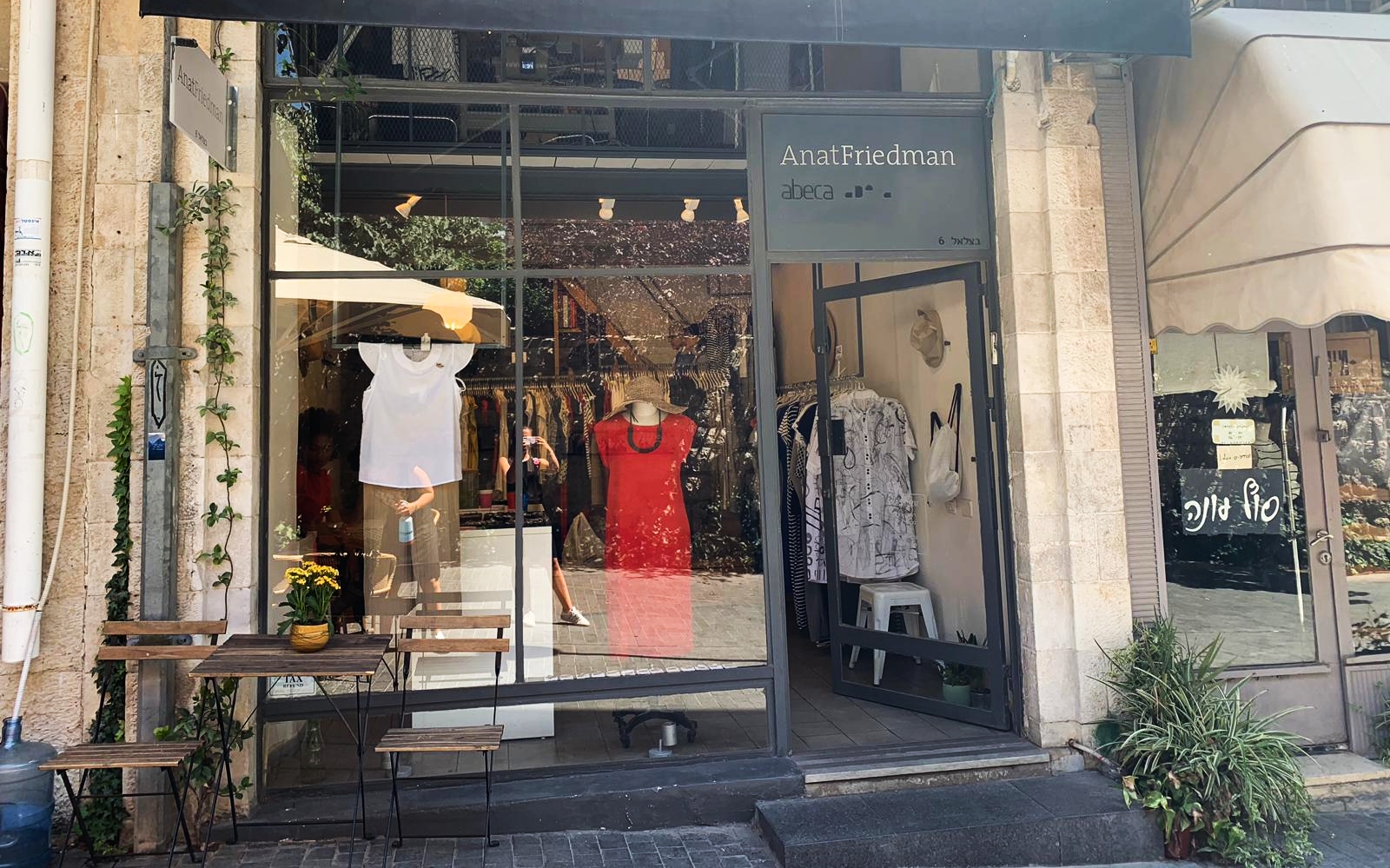 Born and bred in Jerusalem, Friedman, 35, graduated from the fashion design program at Bezalel Academy of Art and Design. Four years ago, she opened an eponymous shop and studio on “fashion row” across from the original Bezalel campus.

“It was my dream to open on this street because my mother used to take me from store to store here when I was small,” Friedman said.

She also carries jewelry created by two friends and by her husband, fellow Jerusalem native and Bezalel graduate Yitzhak Abecassis, head of the accessory department of Tamnoon, the only Jerusalem-based mass-market fashion brand.

An artist at heart, Friedman paints on some of her creations. “I’m trying to look at my garments as a canvas,” she explains. 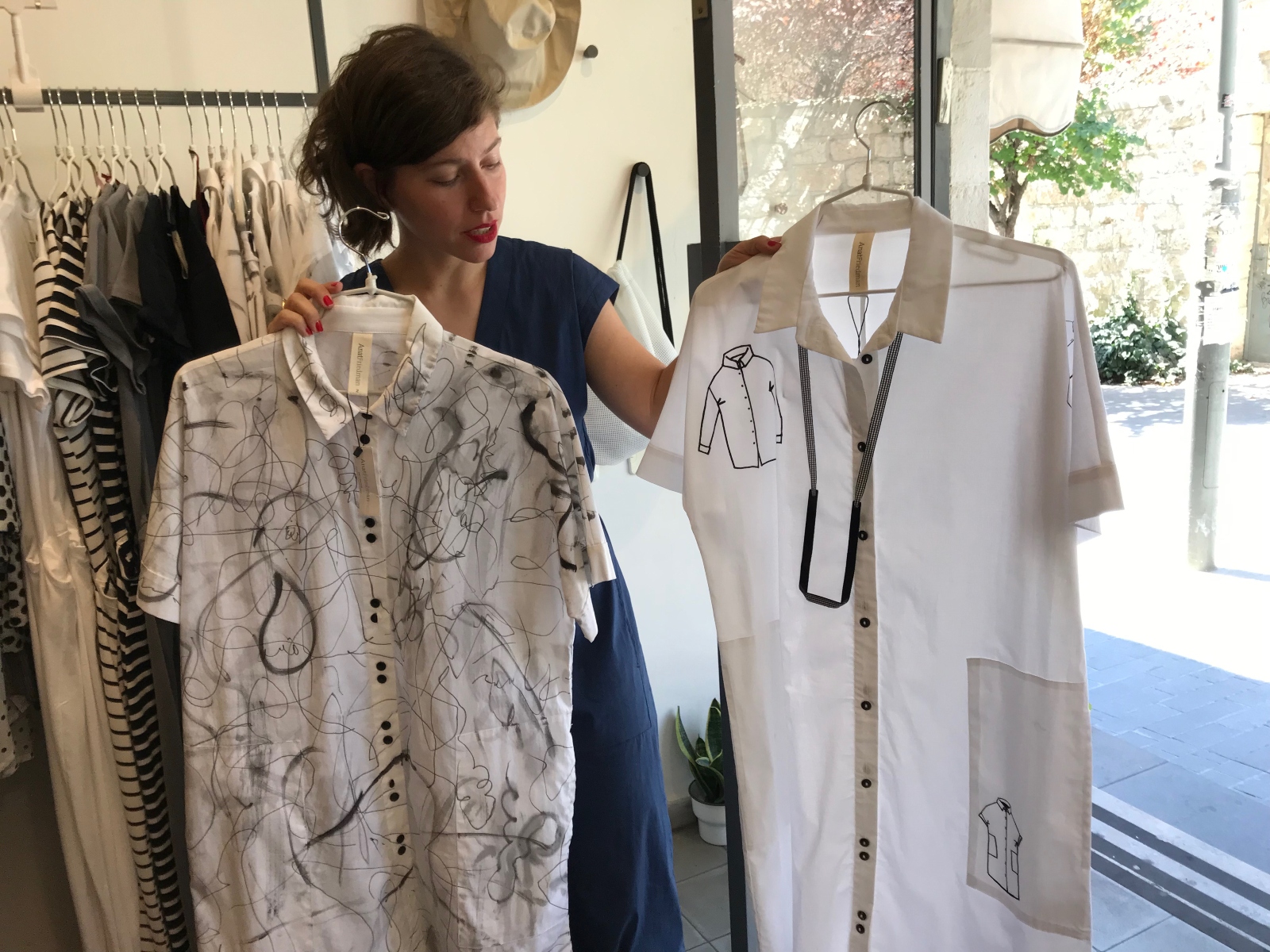 Anat Friedman with two of her hand-painted dresses. Photo by Abigail Klein Leichman

She uses natural fabrics like cotton and linen “with a little bit of Lycra for flexibility” and describes her designs as “very minimalistic. I don’t want the garment to take over the person. I want it to be a dialogue. My clothing is classic with a twist, designed to flatter the body and to be very practical for day and evening.”

Friedman includes pockets in every garment she makes. That’s a rare utilitarian bonus in women’s fashion. 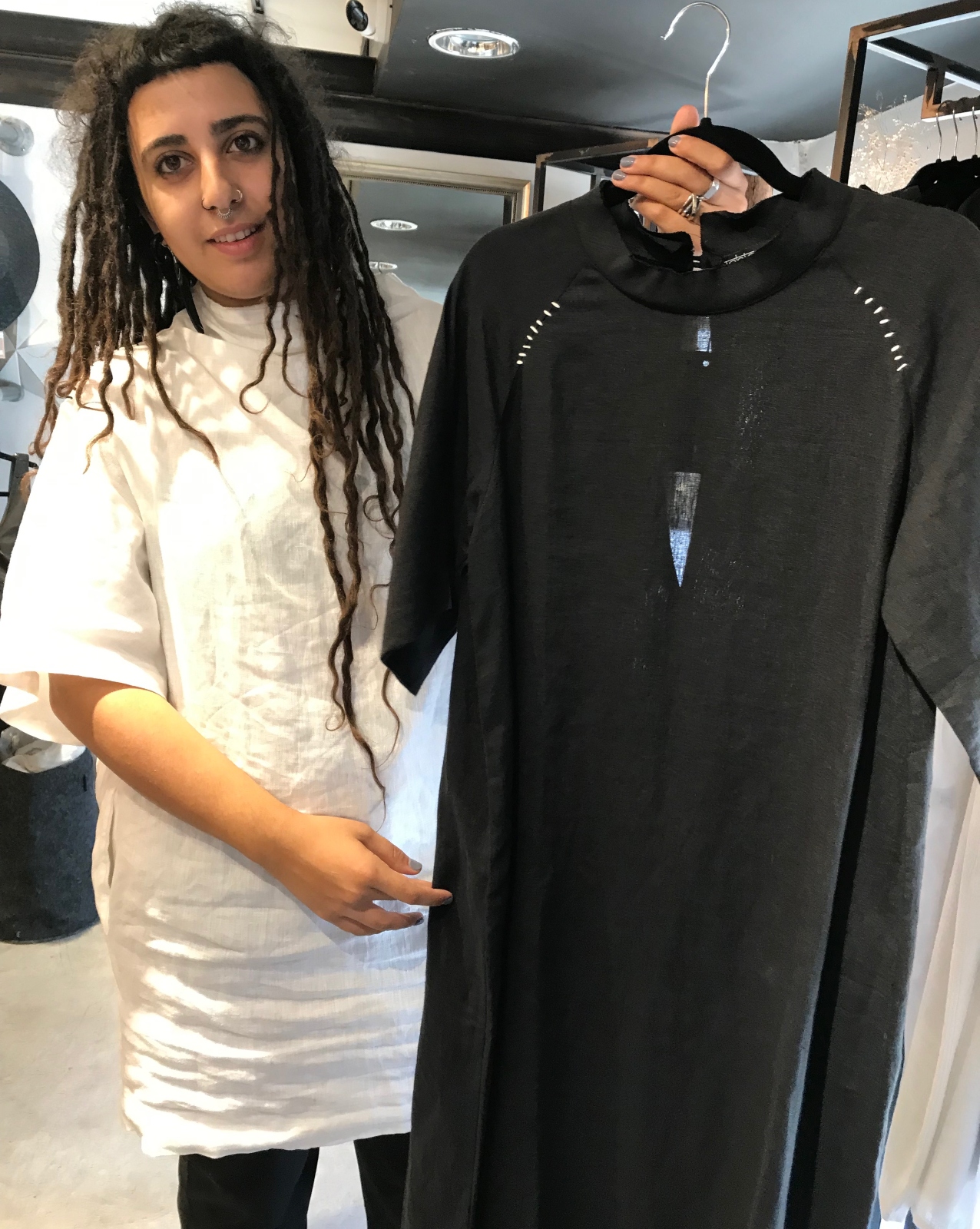 Yarden Moshe with pieces from her Jahtawear collection, made of handwoven sustainable fabrics in India and inspired by Israel’s people and landscapes. Photo by Abigail Klein Leichman

Yarden Moshe, 29, is one of several designers at Nocturno, a unique culinary-and-culture venue in Jerusalem featuring a café and performance space in addition to design studios, pop-up studios and soon an art gallery.

In 2016, Moshe traveled to India and came across a colony of weavers that inspired her. When she came back to Israel, she learned traditional weaving at The House of Traditional Handicrafts in Jerusalem.

She does her pattern-making and preliminary design work in Jerusalem and goes to India to produce the Jahtawear garments. (Jahta means “dreadlocks” in Hindi; that’s what the locals nicknamed her because of her hairdo.)

“It’s a very small business and everything is made by hand. Some of these natural, sustainable fabrics I cannot find in Israel and I like to choose everything, even the thread,” she told ISRAEL21c.

Moshe says her inspirations are local,“mostly the desert and the people of Jerusalem.”

Her black and cream garments “symbolize the contrasts between nature and city that we have in Jerusalem, where I grew up. In the future I want to produce some of the things here as well because I support local labor and fair trade.”The collection is available online. 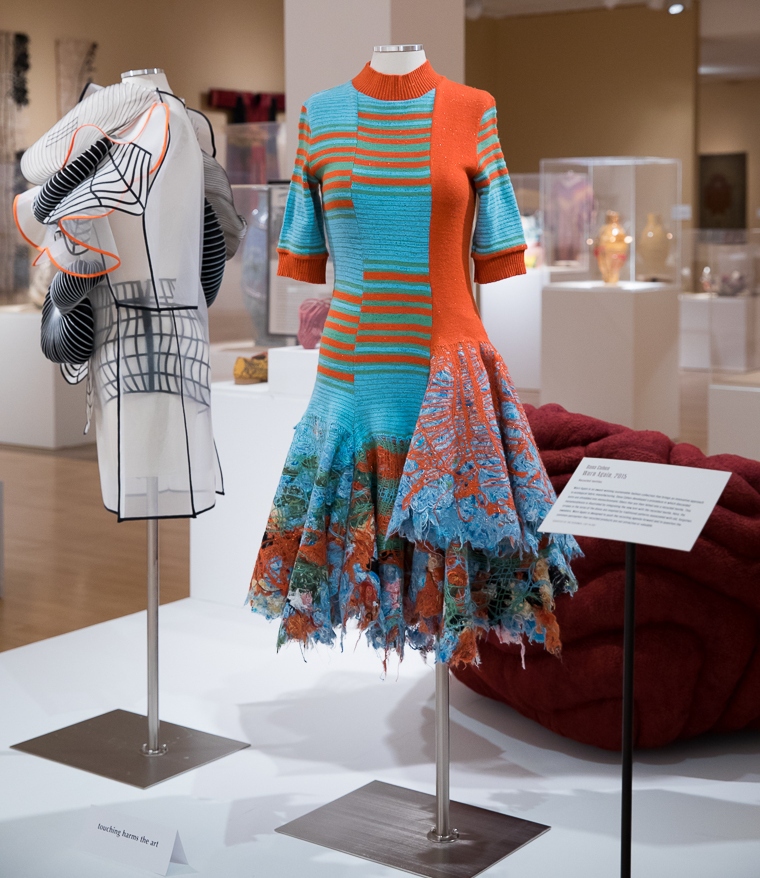 Cohen invented a process to shred knitted garments she collected from clothing discard bins and turn them into monochromatic fibers that she felted into new recycled textiles. Her innovative approach to ecological fabric manufacturing got lots of attention. 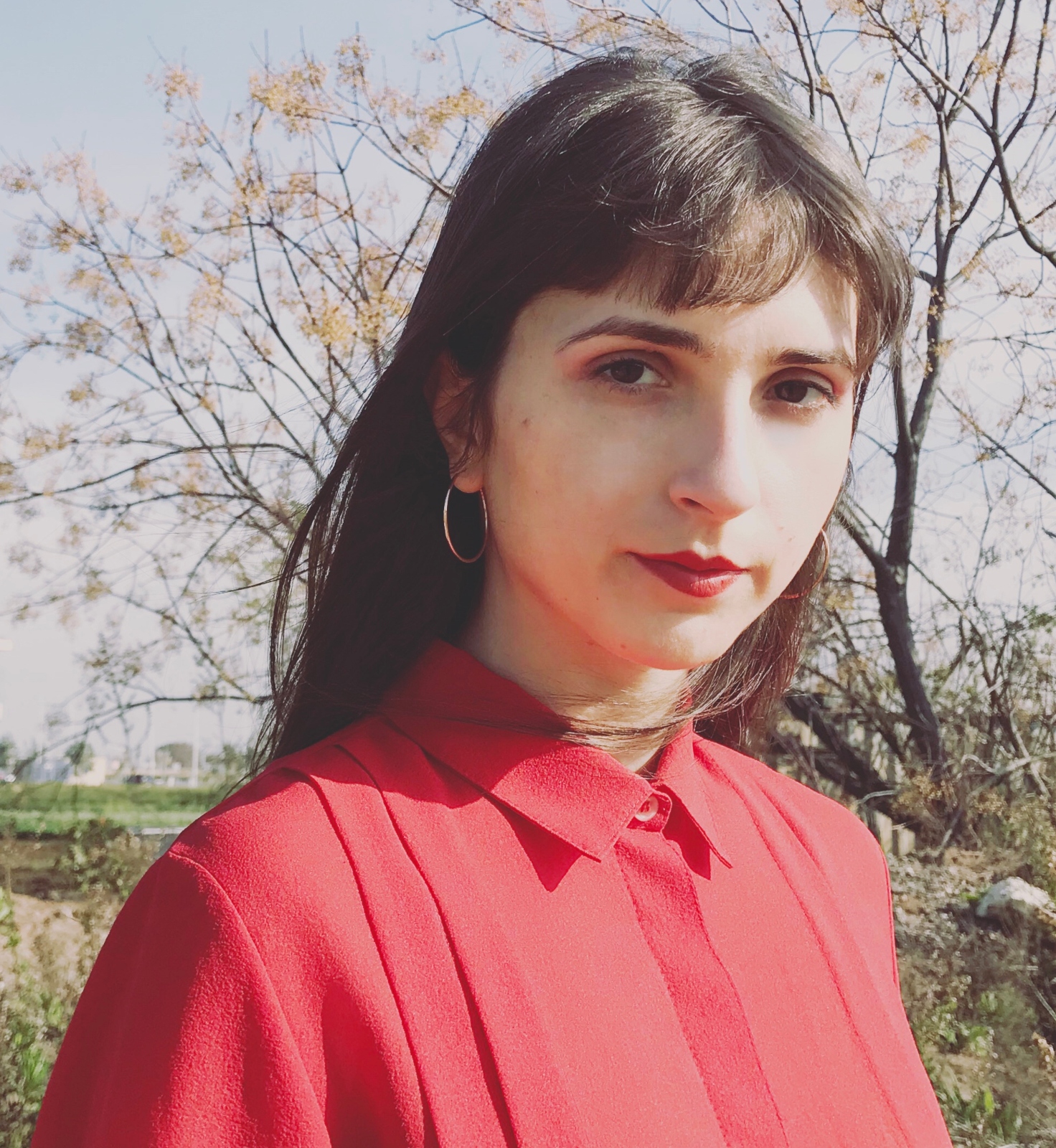 Outfits from “Worn Again” have been displayed the Tel Aviv Museum of Art, Mingei International Museum in San Diego and Design Museum Holon. The collection received two Shenkar awards – one for creativity and originality in design and the other for green technologies.

“I wanted to show that you can create something out of anything if you understand the potential in the material,” Cohen told ISRAEL21c.

In 2018, with the help of an award from the Lottery Council, Cohen launched her “City Growth” collection, featured that year in Tel Aviv Fashion Week and in Vietnam International Fashion Week. One piece was included in the Israel Museum’s “Fashion Statements” exhibition. “The collection is inspired by the massive city growth, the overtaking and marginalization of agricultural plots by processes of urbanization,” Cohen explains. “As the daughter of a farmer who experienced this process firsthand, I wanted to share this phenomenon and used NASA aerial photographs that reveal the changes on the ground.”

Her clients, she says, “are people interested in sustainability, in handmade items, in colorful clotheslike they’ve never seen before.”

UNCOVER ISRAEL - Get the ISRAEL21c
Weekly Edition free by email
Sign Up Now!
Bring Israel's story to life.
Millions of people around the world rely on us to gain a deeper understanding of Israel. We are the trusted source for original content you won't find anywhere else.
You can make a difference. Donate today to support journalism that brings Israel’s story alive.
SUPPORT ISRAEL21c
Read more on:   Culture, Fashion