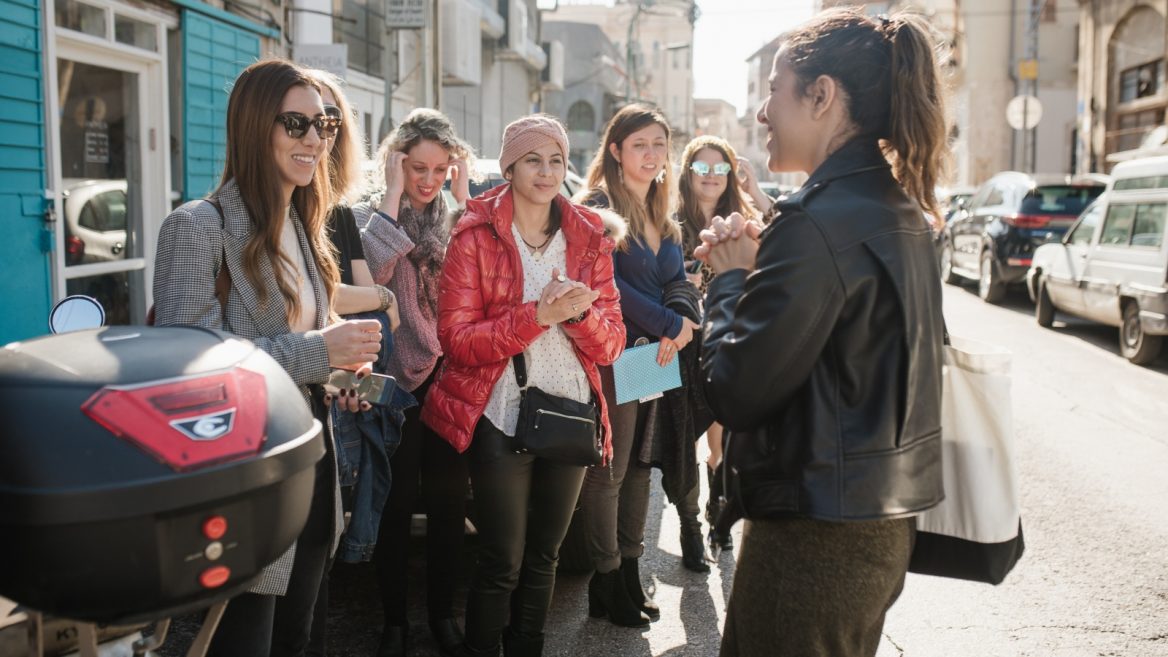 Liraz Cohen, right, leading a Fashionating by Liri tour in the Jaffa district of Tel Aviv. Photo by Shany Reich

Swimsuits by Gottex, wedding gowns by Galia Lahav and red-carpet dresses by Shahar Avnet: Israeli fashion has made its mark internationally as growing numbers of celebrities don designs dreamed up by Israelis.

Those of us who don’t have the glam (or budget) of Beyoncé or Rihanna can still find our fit from Israeli designers — if we just know where to look.

ISRAEL21c recently took three fashion tours led by Israeli insiders eager to share their passion for fashion with locals and especially with visitors from abroad as part of their trip itinerary. A fourth tour option, dedicated specifically to Israeli fashion, food and culture, is led by the former owner of a New York City boutique specializing in Israeli designers.

Any of these fun tours will deepen your appreciation of Israeli creativity. Should you fall in love with an outfit or accessory to take home, all the better! 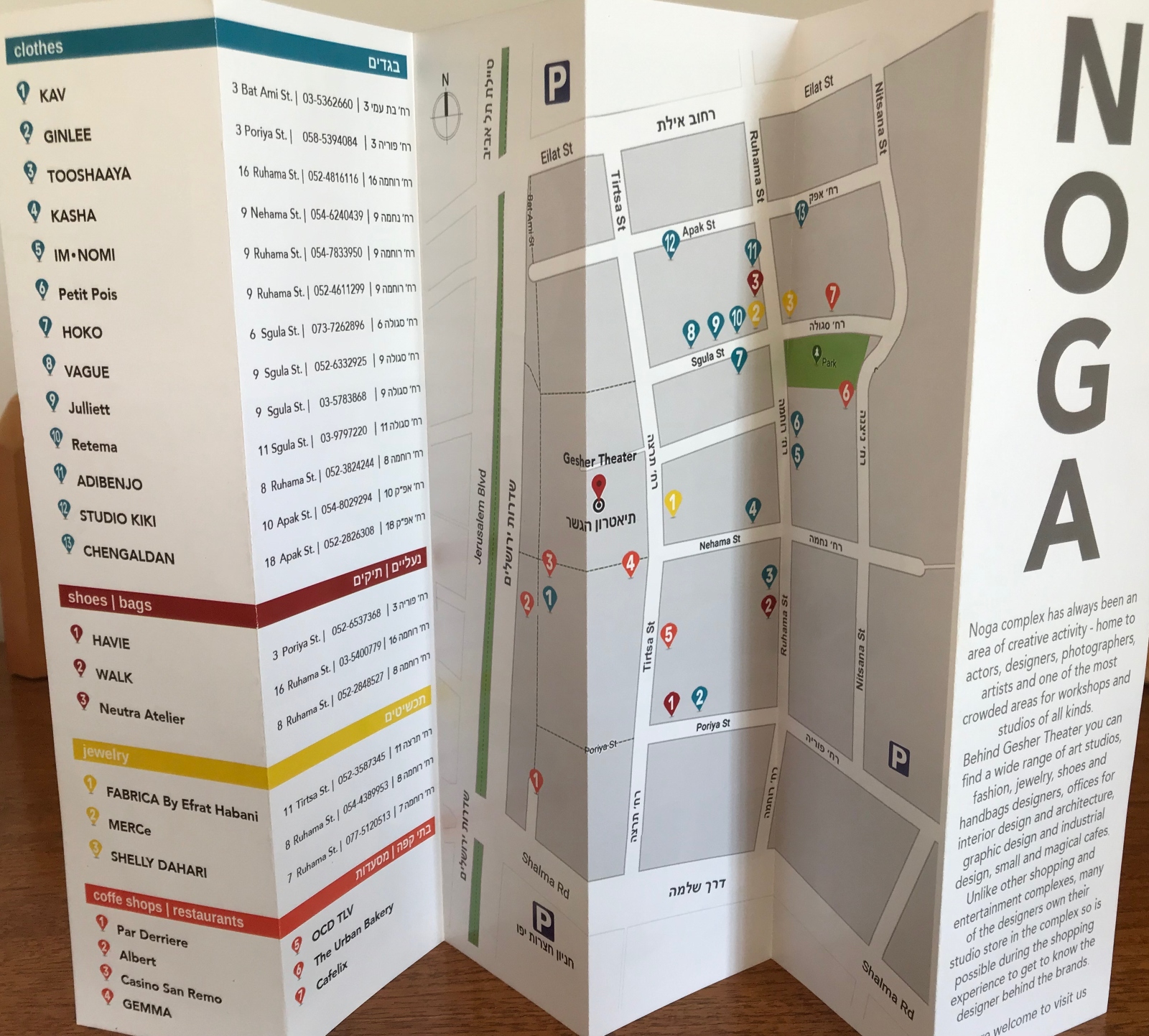 A map of designers in the Noga neighborhood of Tel Aviv.

At the end of this article you’ll find links to the websites of more than 20 young Israeli designers on the radar of our fashion tour guides. In a future ISRAEL21c article we will take a closer look at several of the clothing designers we visited.

We begin our fashion travelogue in Tel Aviv, the undisputed – but not exclusive – fashion capital of Israel, where we meet fashion tour pioneer Galit Reismann in the Noga neighborhood near Jaffa. Thirteen clothing designers and half a dozen shoe, bag and jewelry designers have studios dotting this quaint district.

Over a cup of coffee before we start walking, Reismann explains that in 2012, after five years of transatlantic travel running trade shows for a distributor of Israeli fashion in the United States, she decided to stay home and invent a new niche: TLVStyle fashion tours of Tel Aviv.

“I’m a people person. I love Tel Aviv and its creative people, and I love working with international people. I create bridges between them,” Reismann says. 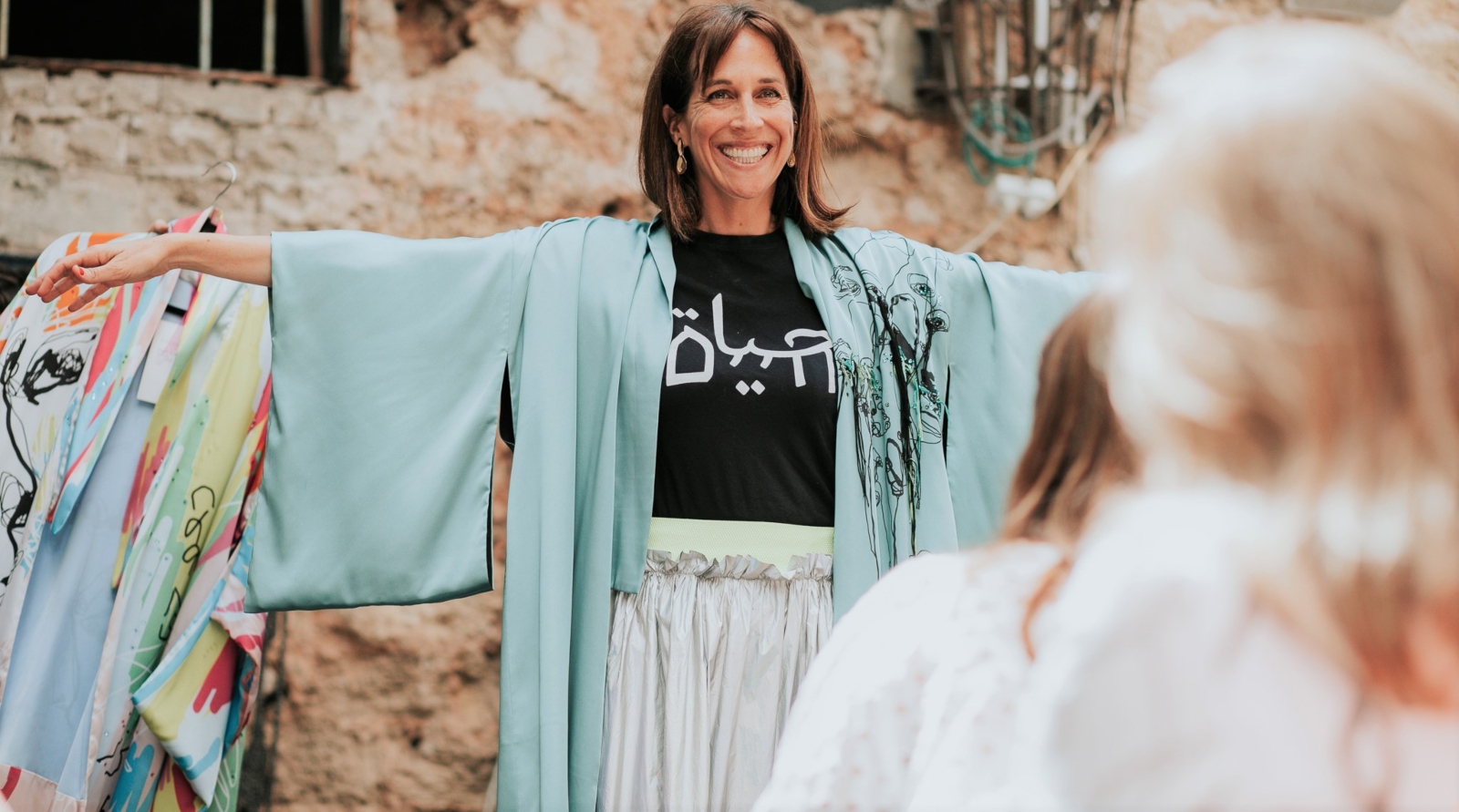 Often working in cooperation with tour operators and the ministries of Tourism and Foreign Affairs, this Israeli fashion maven has taken groups and individuals from 15 countries on half-day explorations of small studios producing cutting-edge clothing, accessories and jewelry.

Reismann focuses on up-and-coming graduates of fashion programs at prestigious Israeli institutions such as Shenkar College of Engineering and Design.

“Since Israel is a young country and we don’t have a fashion heritage, I decided to build my fashion tour through the Israeli identity and through the young emerging designers who are the voice of the future in Israel,” she says.

“I want to show the human stories by bringing people to meet designers in their ateliers. When they buy something and share its story with people at home, they become an ambassador for Israel. But you don’t have to buy anything. A fashion tour with me is like a culinary tour. You need to experience it and celebrate it.”

Although about 90 percent of her clients are female, she has some exciting menswear designers on her itinerary and always welcomes male participation.

A questionnaire inquiring about everything from taste in fashion to taste in music helps her tailor each itinerary.

“Every tour is different but all show inspiration, creativity and innovation. The main core mission of the tours is to inspire you and educate you,” Reismann tells ISRAEL21c. Stops can include designers of accessories and jewelry. 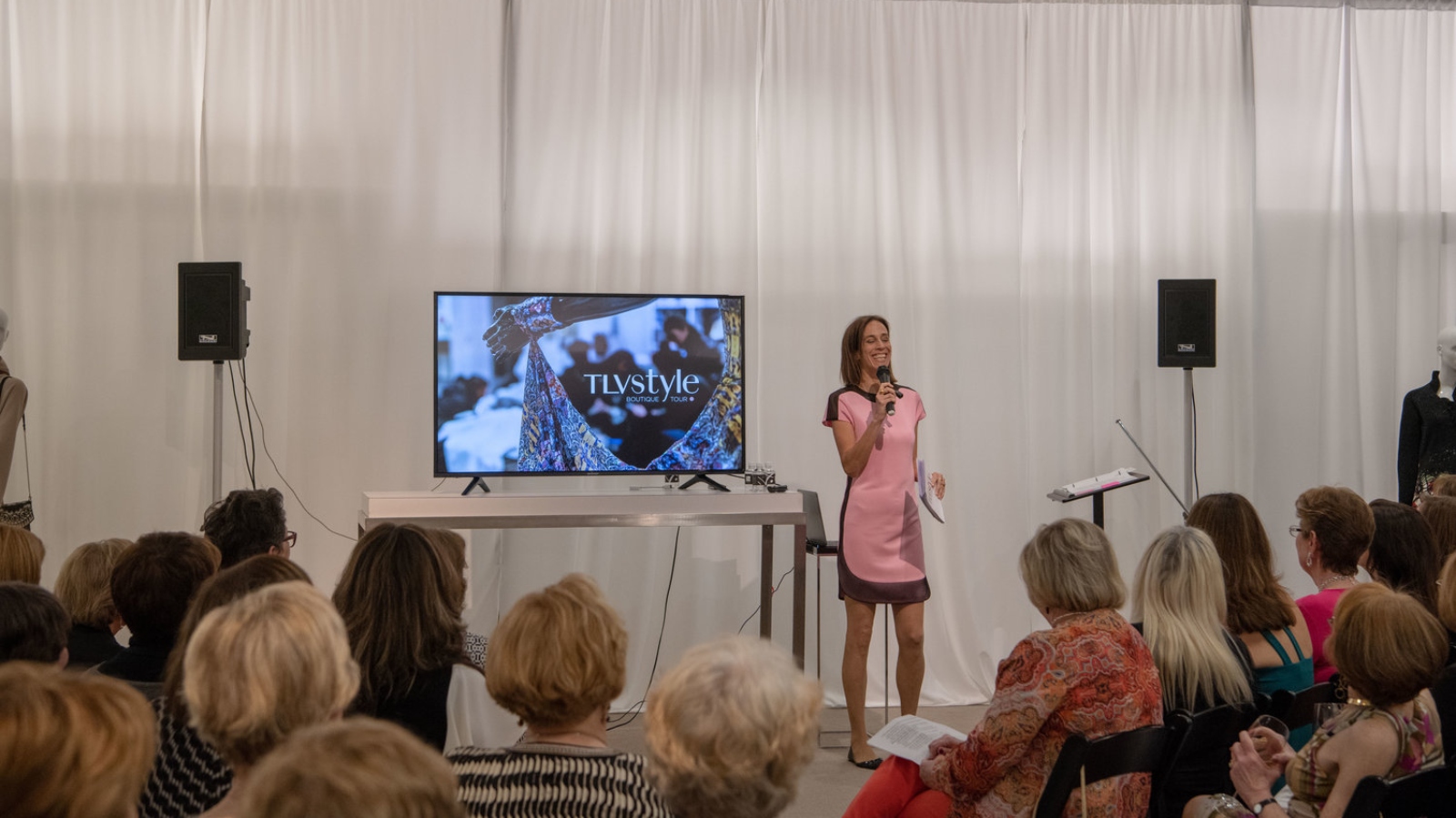 Galit Reismann of TLVStyle presenting at a Lions of Judah convention in St. Louis, May 2019. Photo: courtesy

In between studios, Reismann sparks conversations about slow fashion, sustainability, entrepreneurship, glocalization, innovation vs. craft, and coexistence in fashion. These are the values she also incorporates into Israeli fashion talks she gives overseas.

In honor of International Women’s Day in March 2020, Reismann will partner with Israel Unlimited Boutique Tours in “Shades,” a weeklong event for 16 women exploring Israeli culture through fashion, art, cuisine and luxury lifestyle in different cities and ethnic communities.

Fun fact: The modern Hebrew word for “fashion,” ofna, was coined by Hemda Ben-Yehuda, wife of Eliezer Ben-Yehuda, the man who revived the Hebrew language in the 19th century. She even wrote a fashion column under a pen name.

That is one of many interesting historical tidbits ISRAEL21c learned during a tour of emerging clothing and jewelry designers in Jerusalem with Ilan Pelleg Dotan of Fashionating by Liri.

Fashionating tours of Tel Aviv and Jerusalem grew out of Liraz “Liri” Cohen’s lectures and runway shows across the United States highlighting Israeli fashion past and present. A stylist and blogger with a master’s degree in fashion merchandising from New York’s Fashion Institute of Technology, Cohen splits her time between Tel Aviv and New York.

“Liri tells the story of Israel through the unique perspective of fashion. It’s relatable and fun,” says Dotan, a Shenkar fashion design graduate and Fashionating by Liri’s director of Israeli programs. “People from her audiences told her that they wanted to come to Israel and see the designers, so in 2016 she decided to lead fashion tours to Israel.”

A variety of itineraries includes sustainability and fashion, technology and fashion, startups influencing the future of fashion, and local designers. Luxury brands, sustainable brands and a tour geared to fashion industry professionals are among the options. 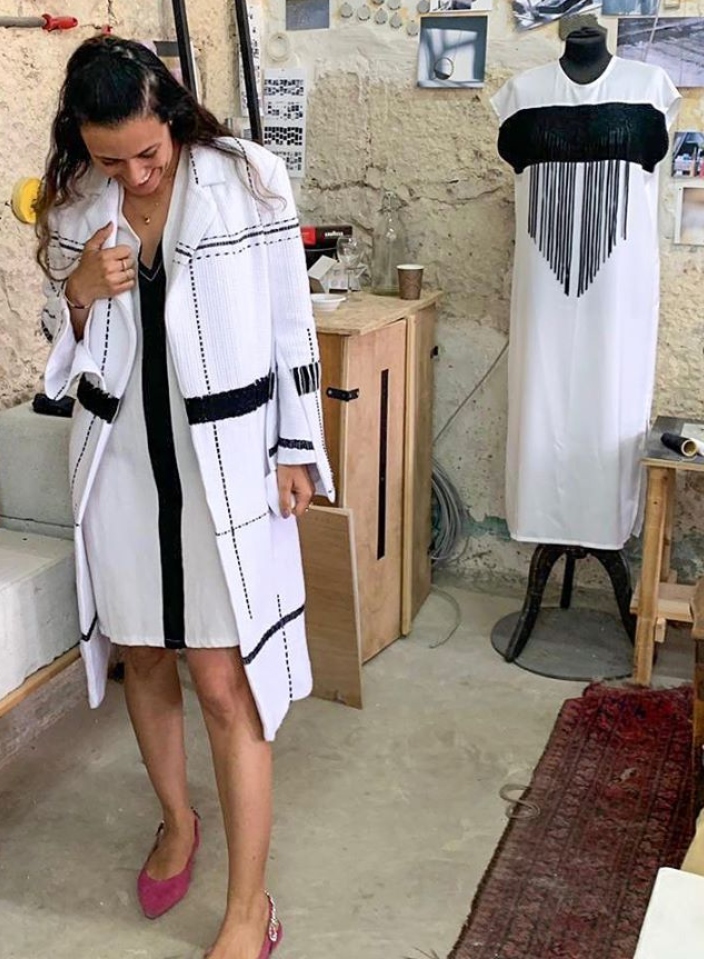 The Jerusalem tours, begun this July, weave in the narrative of how 2,000 years of history and spirituality influenced the unique fashion flavor of the capital city. Many of the pieces we saw were black and white, perhaps inspired by the religious garment palette – think of the tallit (prayer shawl).

“When we told designers we are starting tours in Jerusalem they were so happy; it was like they were waiting for someone who will let them speak and share their inspiration,” Cohen says.

The designer fashion scene in Jerusalem is centered around trendy Bezalel Street, original location of Bezalel Academy of Art and Design established in 1906. Today that campus houses Bezalel’s architecture program and the fashion design program is based on the Mount Scopus campus. However, this is the district where many Bezalel graduates return to launch their clothing and jewelry.

Dotan, a kibbutz-raised Israeli whose English is fluent thanks to her American mother, imparted lots of interesting information about Israeli fashion history and Jerusalem’s emerging designers. We received a take-home packet including contact information for the designers we visited, among other goodies.

Get info on Fashionating by Liri tours here. Another new tour of the Jerusalem fashion scene comes from a different angle, that of professional personal stylist Devora Golan, who moved to Israel from the United States in 2007.

In addition to doing personal shopping, wardrobe and event fashion consultation for private clients from secular to ultra-Orthodox, earlier this year Golan launched tours in Jerusalem that combine the stories of several designers with styling and shopping guidance for each participant.

She accepts individuals and small groups; a short questionnaire helps her determine your style and what items of clothing or accessories you’re seeking.

“People always say they don’t know where to shop here and I want them to see that there are so many amazing designers and good-quality pieces for a range of budgets,” says Golan.

For now, her itinerary includes four clothing stores, one accessory store and one jewelry store in downtown Jerusalem. She plans to build tours in other Jerusalem neighborhoods such as the German Colony, and in other cities such as Tel Aviv and Petah Tikva.

“The added value is that you’re getting my expertise about what will look good on you,” says Golan, who greeted us with a gift of a Mod Stylista bottle filled with cold water – a must for walkers around Israel and a useful keepsake.

In 2003, New Yorker Fern Penn opened Rosebud, the first store in the United States to offer women’s designer clothing, accessories, home accessories and art all designed and manufactured in Israel.

For 15 years, Penn made buying trips to Israel several times a year for Rosebud, first located in Soho and then on Madison Avenue. As Manhattan rents rose steeply, Penn decided to close her shop and instead offer small groups of women exclusive week-long tours exploring the fashion and design scene in Tel Aviv, Jaffa and Jerusalem.

“By the time we went home, everyone had to buy an extra suitcase,” Penn tells ISRAEL21c. 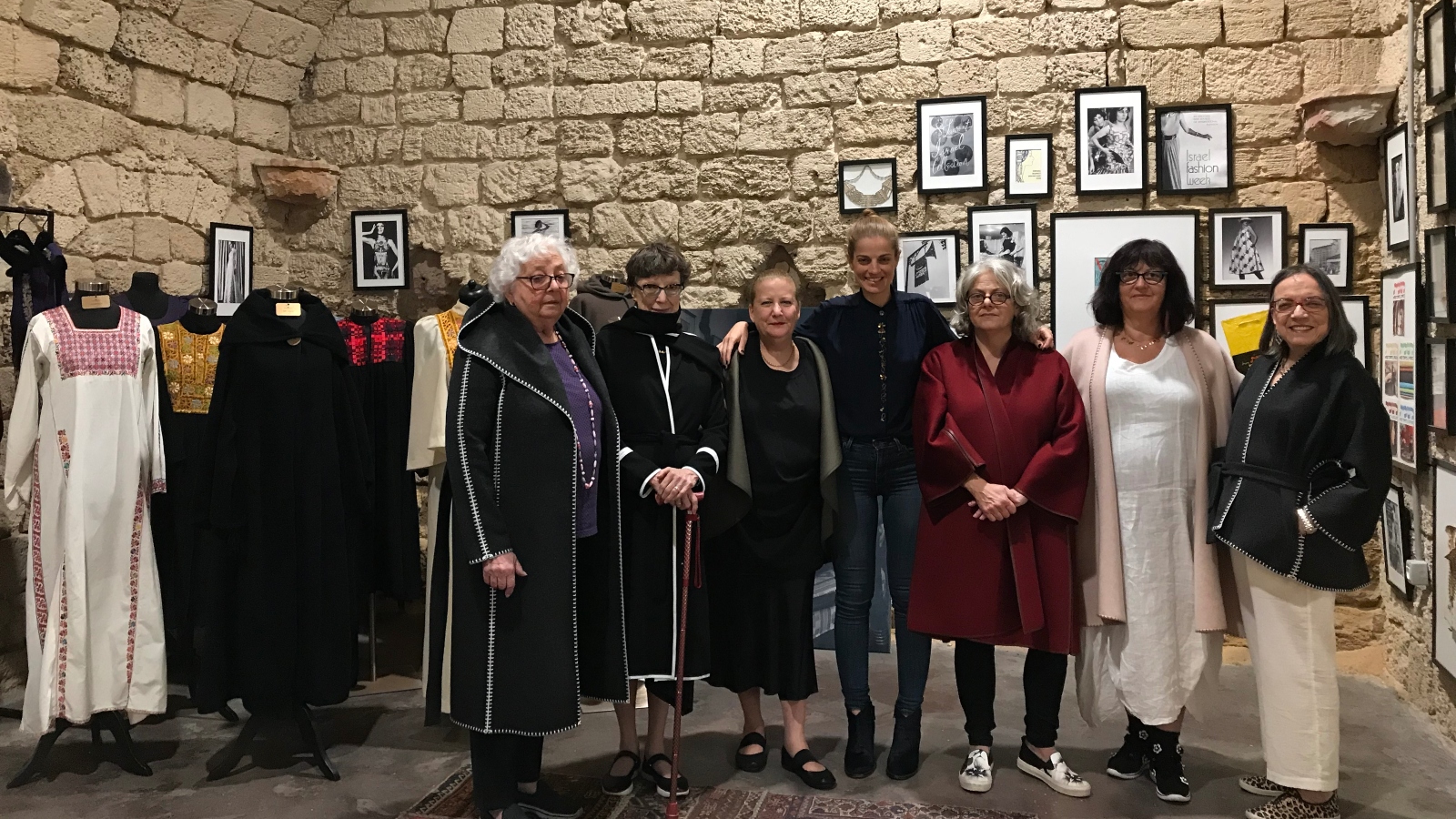 Click on the links below to learn about emerging Israeli fashion designers recommended by our fashion tour leaders as exemplars of the local scene. And watch for a future article detailing the stories of several designers we met on our tours.