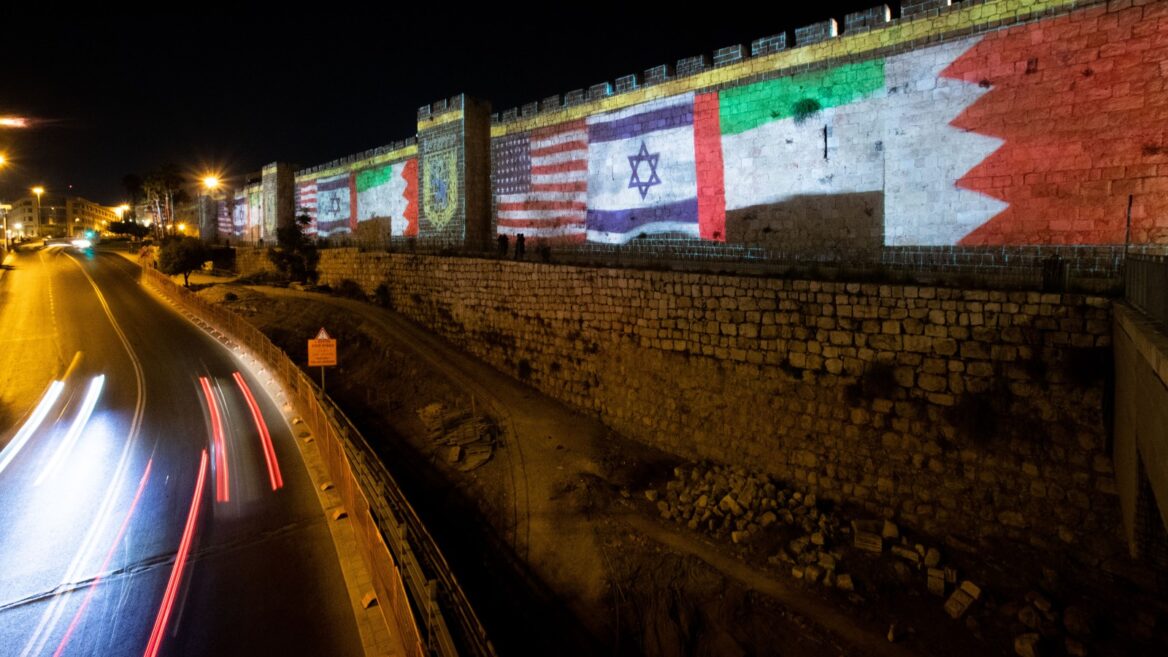 The flags of the US, United Arab Emirates, Israel and Bahrain are screened on the walls of Jerusalem's Old City on September 15, 2020. Photo by Yonatan Sindel/Flash90

Food security is emerging as a key area in which the UAE is eager for Israeli expertise, investors in each country tell ISRAEL21c.

The Gulf states import more than 90 percent of their food. This has long been a concern, but the issue intensified when pandemic-related transportation stoppages disrupted supply for several months. The UAE now has a food security minister and Food Security Council.

The Abraham Accords announced between Israel and the UAE on August 13 – and with Bahrain a month later – give these countries access to promising food-supply solutions from the ground up.

“The Gulf states see how we produce vegetables in the desert and are very impressed. This is essential to them and they seek companies that can deploy technologies tomorrow,” says Edouard Cukierman, chairman of Cukierman Investment House and managing partner at Catalyst Fund. 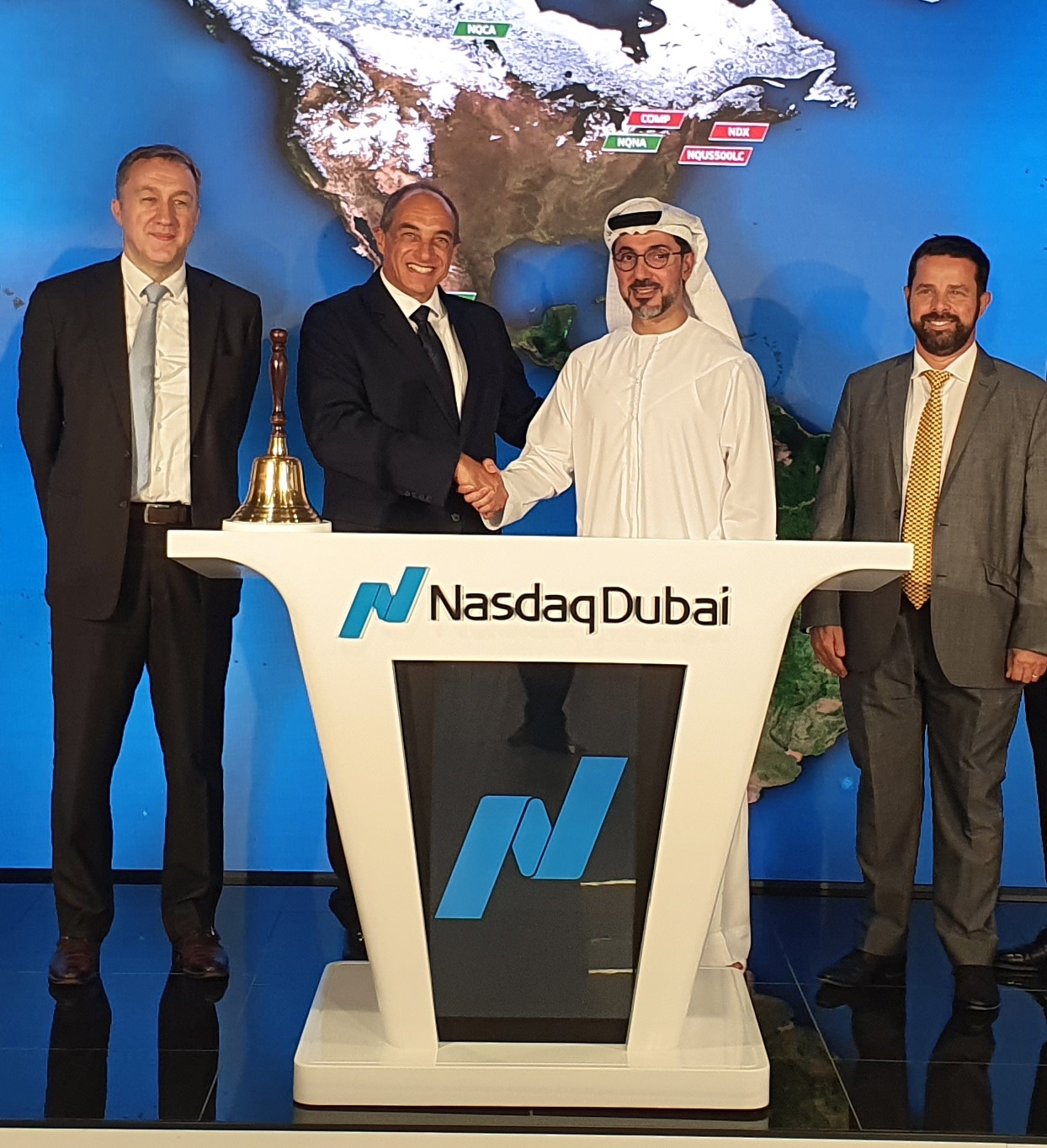 He and senior partners of his Tel Aviv-based firm recently met with Hamed Ahmed Ali, CEO of Nasdaq Dubai and the local stock exchange, to discuss opportunities for Israeli businesses.

“One topic that came up again and again is food security,” Cukierman tells ISRAEL21c. “They are ready to allocate a lot of funds to assuring their food supply.”

Established Israeli companies in fields such as precision agriculture and irrigation, seed treatment, desalination and solar energy can step swiftly into the welcoming UAE landscape and perhaps even partner with UAE ag-tech startups.

“We have identified 200 companies that we think fit the food-security sector and we’ll choose about 20 that have a major opportunity to deploy in the UAE,” says Cukierman.

He plans to introduce them at the first UAE version of his firm’s GoforIsrael investment conferences, which normally happen in Tel Aviv, China and European countries such as Switzerland.

Abu Dhabi-based investor Ahmed Nasser Al Nowais confirms that producing food locally is a top priority. His country hopes to incorporate Israeli methods to do so economically and sustainably in a semiarid climate.

“In our part of the world they are not focusing on agri-tech enough. I heard Israel has the best startup ecosystem and agri-tech is a big part of that,” Al Nowais says.

“They are looking for technology to help with that, and the head of our life-sciences division, Dr. Laurent Choppe, happens to be a veterinarian,” Cukierman relates.

Ahmed Nasser Al Nowais tells ISRAEL21c that the Emiratis are “maybe even more excited than you guys” about the normalization agreement with Israel.

“You have more excellent ideas than I ever saw from one country,” he says. 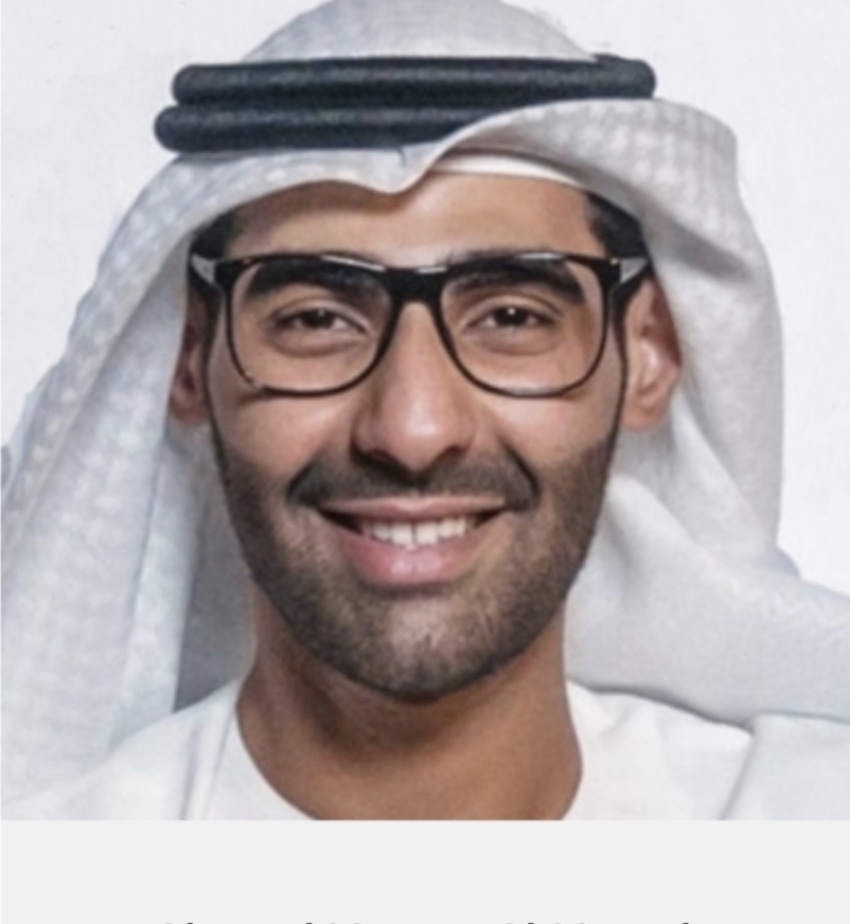 Coming from an investment family office, Al Nowais was an entrepreneur since age 16, and founded Annex Investments in 2017. His broad interests encompass sectors from automotive to fitness, tourism and telecom. Annex has worked with VCs in Germany, India and Silicon Valley.

In addition to Israeli agricultural technologies, he is also looking at health-tech, ed-tech, cybersecurity and machine learning.

“We’re excited about this historic moment for the region, and to expand a community of peaceful coexistence and, most importantly, build a powerful engine of economic and cultural exchange,” Emirates Angels Chairman Masaood Al Masaood told the multinational audience of about 1,000. 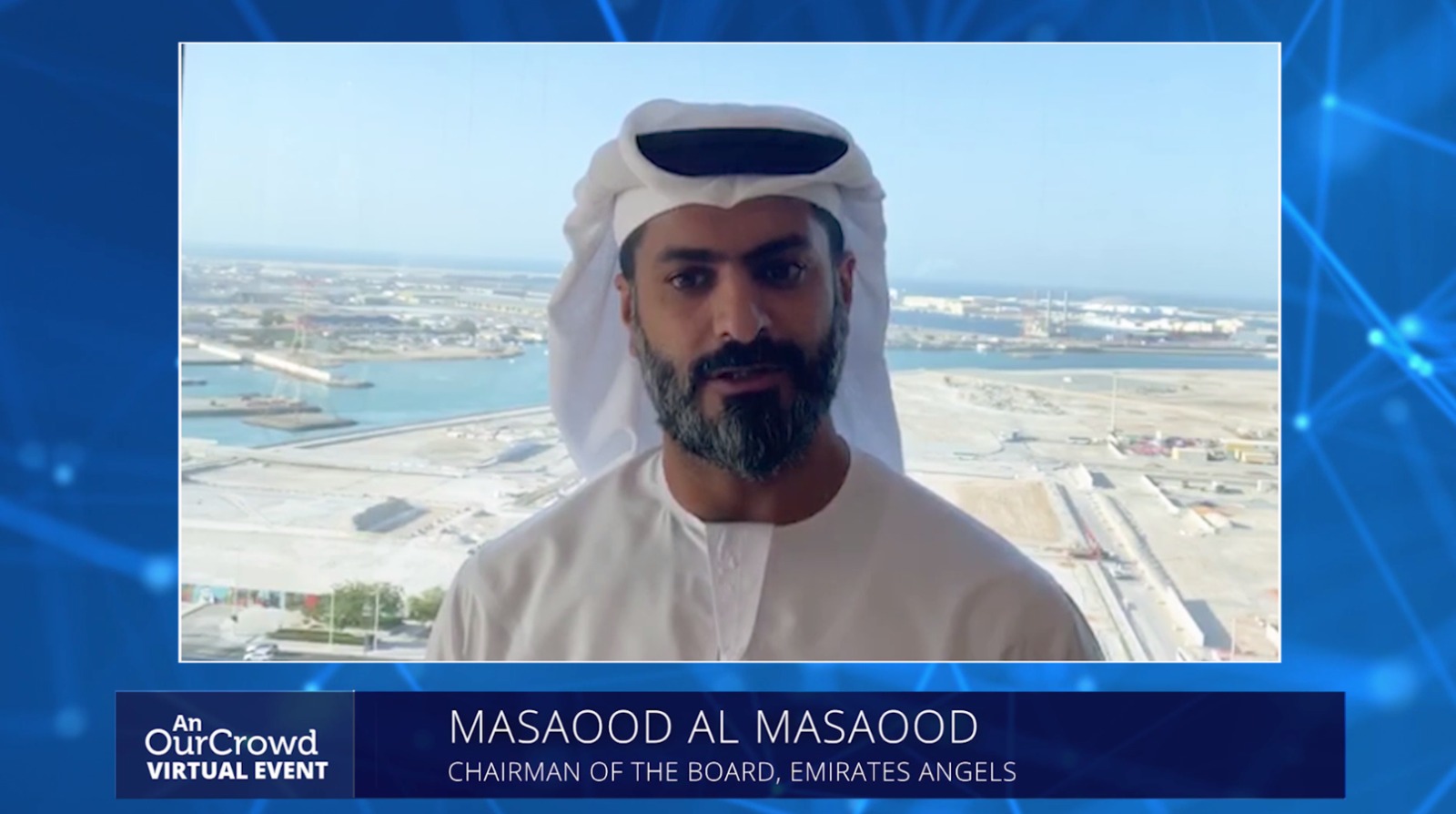 Screenshot from the Emirates Angels/OurCrowd investment summit on September 22, 2020.

About 2,000 people registered for a follow-up event, “UAE Tech Investment Landscape: Introduction for the Israeli Ecosystem,” broadcast from Abu Dhabi on October 13.

Emirati investors and entrepreneurs talked about opportunities for collaboration in what Sabah al-Binali, OurCrowd’s new Venture Partner and Head of Gulf Region, called the “friendly business environment” of the UAE.

Al Nowais tells ISRAEL21c: “The three main objectives of the Emirates Angels Investors Association are to educate angel investors on opportunities and risks; collaborate with incubators and accelerators in the UAE and around the world; and provide [vetted] startups to these angel investors. In a year or two, we want to be a safe place for angel investors to come to the UAE.”

He says mentoring and professional networking are just as vital for startups as financing.

“It’s important to get people to meet and share knowledge and experience. I believe in connecting and collaborating,” says Al Nowais. He expects this will be easy to accomplish with Israelis.

“I think you have the best ecosystem because you collaborate together, even if you have differences. I think this is the power.”

Building gadgets and bridges together

UAE investor Ibrahim Ajami had publicly invited Israelis to invest in his country and spurred similar invitations from leaders in other Gulf states. 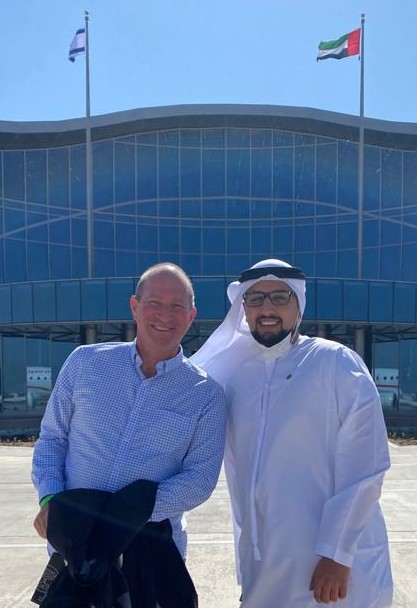 Elie Wurtman was greeted in Abu Dhabi by an Emirati speaking to him in Hebrew, and the sight of an Israeli flag waving at the terminal, October 18, 2020. Photo: courtesy

On October 18, Wurtman flew to the UAE on a historic direct flight from Tel Aviv with a delegation led by US Secretary of the Treasury Steve Mnuchin. (A second group, led by Israel National Security Council head Meir Ben-Shabbat, flew directly to Bahrain to sign a joint communique and eight MoUs regarding future cooperation.)

Wurtman wrote in an English-language Dubai newspaper that he was impressed by the UAE government’s Ministry of Possibilities founded in 2019, and sees many opportunities for Israeli water, desert agriculture and solar technologies, among others.

More than that, he tells ISRAEL21c, “I am most passionate about collaborating around education and creating an exchange between Israeli and Emirati youth to engage in the world of possibilities, innovation and creating a better future for all in the region.” 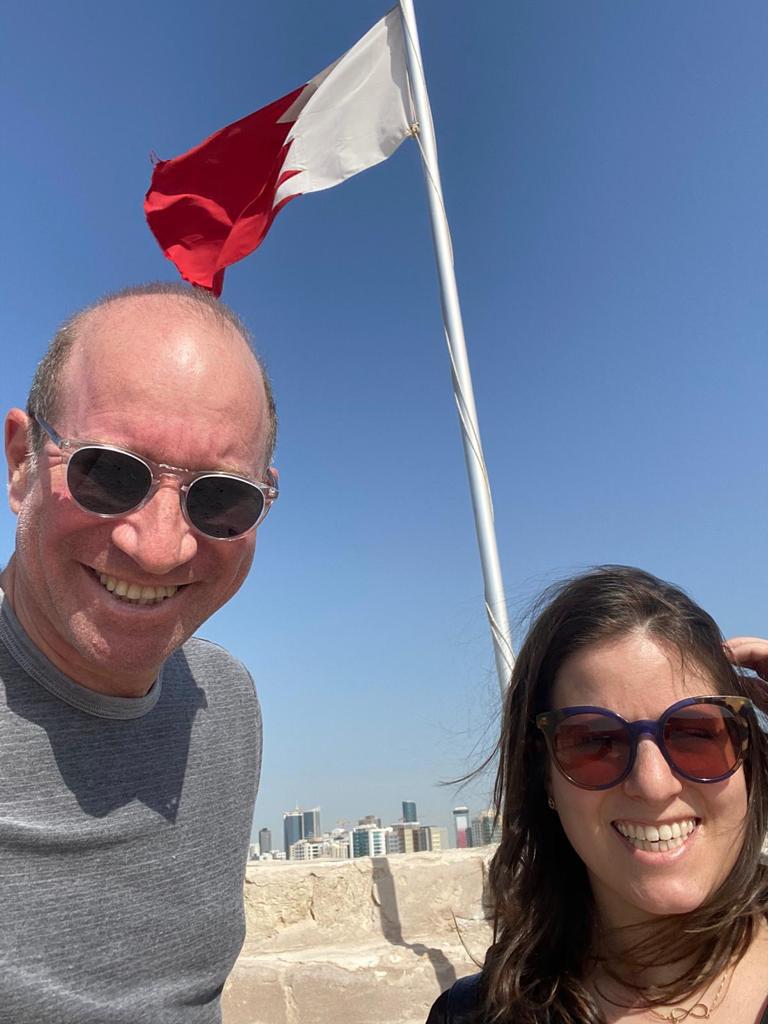 Next year, Wurtman plans to bring 20 young ambassadors from his PICO Kids initiative — founded in 2012 to provide informal education in STEEM (science, technology, engineering, entrepreneurship and math) to multi-ethnic Jerusalem fourth- to ninth-graders —  to meet the next generation of entrepreneurs in the UAE.

“They will build gadgets – and bridges – together. They will meet courageous investors like Ibrahim Ajami, eat hummus together, play backgammon or X-Box, and collectively work to solve some of the region’s most pressing problems.”

News of joint UAE-Israeli projects and investments has been swirling as thick as a sandstorm. Deals already happening under the radar were revealed, and many new collaborations announced.

An online platform, the UAE-Israel List, was created “to enable like-minded companies and organizations in the UAE and Israel to start networking and build friendship, peace and understanding through advancement of business.”

And it’s not only business; it’s also research and culture. This far from comprehensive list demonstrates the diversity of activity, not counting the area of food security already mentioned: