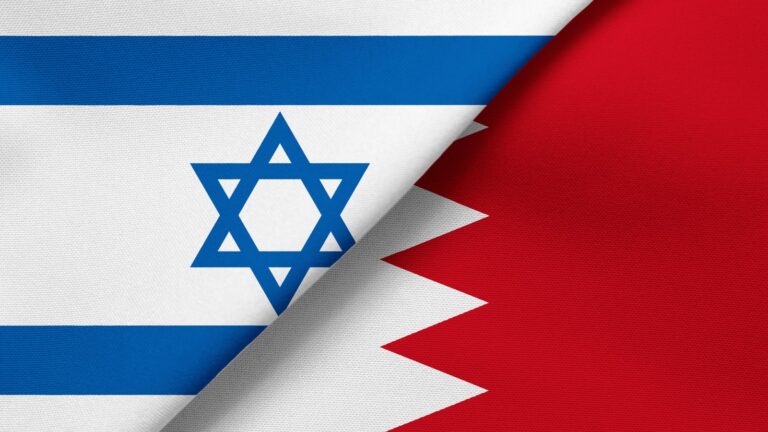 The Israeli and Bahraini flags. Image via Shutterstock.com

When Israeli Prime Minister Benjamin Netanyahu goes to Washington this week to sign the Abraham Accord with officials from the United Arab Emirates, he will also sign a normalization agreement with the Persian Gulf nation of Bahrain, it was announced on Friday.

A joint statement released by Netanyahu, US President Donald Trump and Bahrain’s King Hamad bin Salman al-Khalifa announced “the establishment of full diplomatic relations between Israel and the Kingdom of Bahrain.”

Trump said, “In the spirit of peace and cooperation … they will exchange embassies and ambassadors, begin direct flights between their countries, and launch cooperation initiatives across a broad range of sectors, including health, business, technology, education, security, and agriculture. This is a truly historic day.”

Located north of Qatar and east of Saudi Arabia, Bahrain is a small archipelago made up of 40 natural islands and 51 artificial islands. With a population of 1.7 million people, its main exports are crude oil and petroleum products.

In a phone call with members of the press Saturday night, former head of the Mossad’s Intelligence and Foreign Operations Division Haim Tomer echoed Netanyahu’s remark that the UAE and Bahrain treaties with Israel followed “hard, behind-the-scenes work over years.”

Tomer said Bahrain was one of several Gulf countries in which attitudes toward Israel have been shifting dramatically since 2011 and with which he was in touch discreetly before retiring from Israel’s national intelligence agency in 2014.

“These countries would like Israeli knowhow, technology and security cooperation,” said Tomer. “They don’t want to do it in a limited way through secret relations; they want to broaden relations and get the fruits of strategic cooperation.”