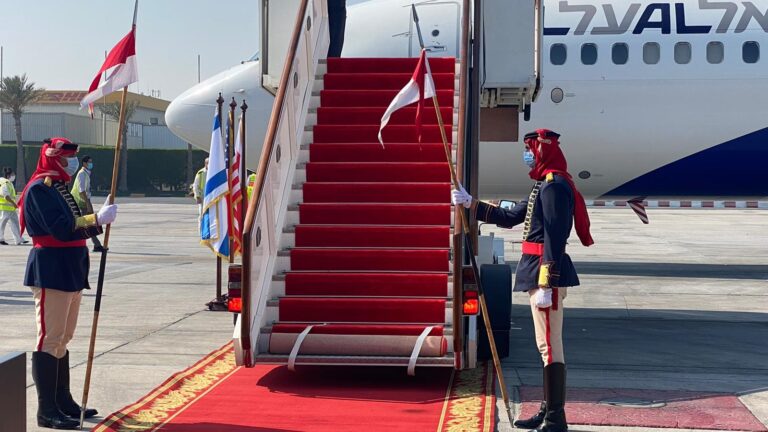 Bahrain rolls out the red carpet for the first El Al plane to land in Manama, October 18, 2020. Photo courtesy of Israel Ministry of Foreign Affairs

That evening, Israeli National Security Council Director Meir Ben-Shabbat and Bahraini Foreign Minister Abdullatif bin Rashid Al Zayani signed a joint communique on the establishment of diplomatic, peaceful and friendly relations between the Kingdom of Bahrain and the State of Israel.

An El Al plane prepares to take off for Bahrain, October 18, 2020. Photo courtesy of Israel Ministry of Foreign Affairs

Israel and Bahrain also agreed to waive visa requirements for diplomats and signed an MOU on cooperation between their chambers of commerce.

Also on October 18, an Israeli business delegation flew to the UAE for an Abraham Accords Business Summit.

The following day, Abu Dhabi-based Etihad became the first Gulf airline to operate a passenger flight to Israel. Etihad has launched a Hebrew-language website to make it easier for Israeli travelers to book reservations.