Church of the Transfiguration, Mount Tabor. Photo courtesy of Israel Ministry of Tourism

More than 60 percent of the 3.4 million tourists who visited Israel last year were Christian. And though Jerusalem is a significant stop in tracing the steps of Jesus in the Holy Land, the real must-see is the Sea of Galilee area nearly 100 miles to the north.

The Sea of Galilee — really a lake that modern Israelis call the Kinneret — lies on the ancient Via Maris trade route that linked Egypt with the northern empires. The location and the excellent fishing drew many Greek, Roman and Jewish settlers – including the families of Jesus of Nazareth and his disciples Simon, Andrew, Peter, Philip, Nathaniel (Bartholomew), John and James.

According to Matthew 4:23: “And Jesus went about all Galilee teaching in their synagogues, and preaching the gospel of the kingdom, and healing all manner of sickness and all manner of disease among the people.”

That’s why no Christian pilgrimage to Israel is complete without visiting these top 10 sites:

Sometimes called “the town of Jesus,” the ancient village of Capernaum on the northwestern shore of the Sea of Galilee was rediscovered in 1838. In the 1960s, the Franciscans restored several old synagogues and churches and also found the “House of St. Peter,” which apparently served as a meeting place for early Christians. In it lay many fragments of plaster bearing Christian symbols and inscriptions including the names of Jesus, Simon and Peter.

A modern church was built atop the ruins of the house in the 1990s, with a glass floor in the middle so visitors can see the original church below. 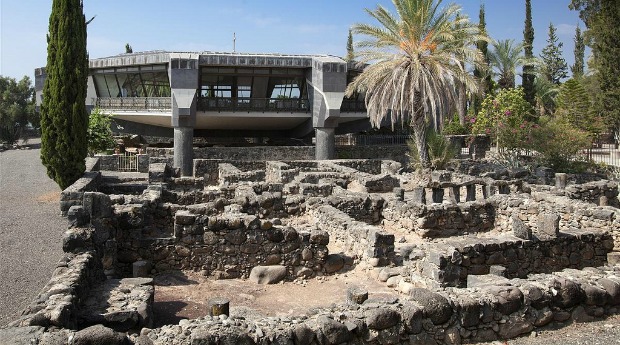 Church at Capernaum built over the ancient house of St. Peter. Photo by Mordagan for the Israel Ministry of Tourism

The area was made into a national park, and the Israel Parks and Nature Authority built a dock where tourists can disembark after sailing to Capernaum from Tiberias or Ein Gev. You can also hike there via the Gospel Trail or Jesus Trail (see below), and wander among the park’s natural and domesticated plants, such as the Christ-thorn jujube said to be the species from which Jesus’ crown of thorns was made.

The fruitful garden of Tabgha, on the northern shore of the Sea of Galilee, is accepted traditionally as the site where Jesus fed 5,000 people with five loaves of bread and two fish (Matthew 14:13-21). The Church of the Multiplication of the Loaves and Fishes was built here in the fifth century. Modern restoration workers revealed and repaired intricate mosaic floors of the church. Also in Tabgha is the Church of St. Peter’s Primacy, where Jesus is said to have appeared to his disciples after the resurrection. 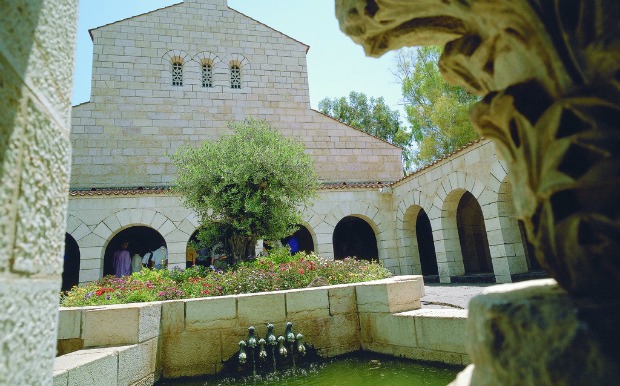 Church of the Multiplication of the Loaves and Fishes at Tabgha. Photo courtesy of Israel Ministry of Tourism

Jesus is believed to have given the Sermon on the Mount here, on a low hill near Tabgha. The octagonal-shaped Church of the Beatitudes (to symbolize the eight beatitudes as described in Matthew 5:3-11) was built by the Franciscan Sisters in 1938 on the hilltop. Inside, Pope Paul VI left his cloak for permanent display in the church after his 1964 pilgrimage. The Mount of Beatitudes is also the spot where thousands of Catholics gathered in March 2000 to celebrate a Mass with Pope John Paul II. 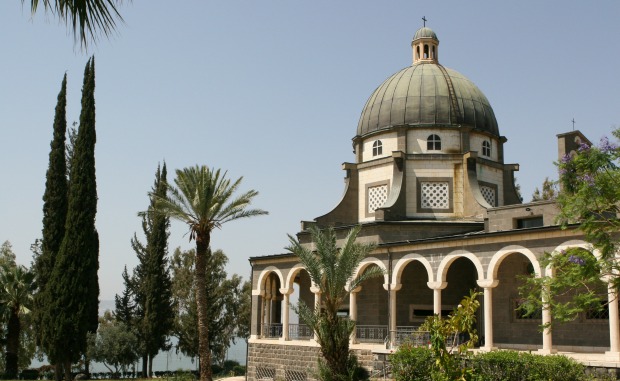 Mount of Beatitudes. Photo by www.shutterstock.com

At 1,900 feet above sea level, Mount Tabor (also called Mount Tavor) is believed to be the site of the transfiguration, when according to the Gospels of Mark, Matthew and Luke, Jesus took the disciples Peter, James and John to see an apparition of Moses and Elijah.

In addition to remains of fifth-century shrines, you can visit the 20th century Church of the Transfiguration here, which has an Eastern Orthodox wing and a Roman Catholic wing as well as a monastery. Lying on the Israel National Trail, Mount Tabor offers views of the Gilboa Mountains to the east, the Carmel Mountains to the west and the Golan Heights to the north. 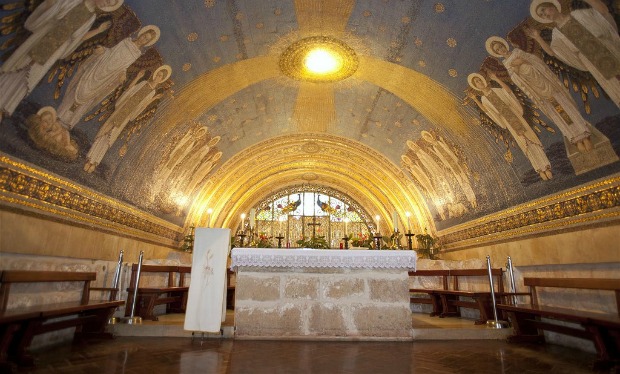 Church of the Transfiguration, Mount Tabor. Photo by Mordagan for the Israel Ministry of Tourism

Kursi, east of the Sea of Galilee at the mouth of a riverbed descending from the Golan Heights, is traditionally the place where Jesus exorcised demons from two possessed men (Matthew 8:28-33). A huge sixth-century monastery and church built there to commemorate the miracle were once major pilgrimage destinations. They lay hidden in ruins until a road construction crew came across the site in the early 1970s. The Israeli government excavated the site and developed it into a national park.

Birthplace of the apostles Peter, Andrew and Philip, Bethsaida is mentioned in Christian Scriptures as a place where Jesus performed several miracles. Located just north of the Sea of Galilee, Bethsaida is an active archeological site first excavated in 1987. 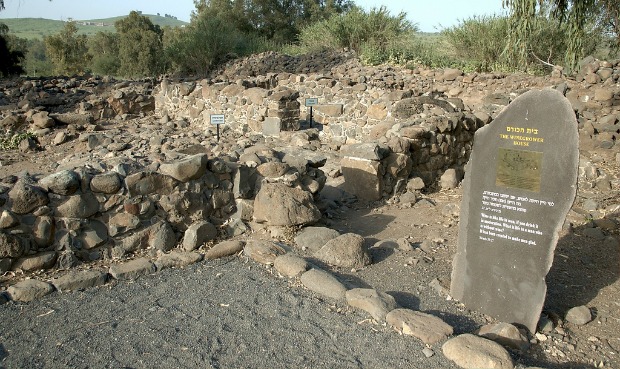 An excavated winegrower’s house at Bethsaida. Photo courtesy of Israel Ministry of Tourism

Underneath the first-century fishing village of Jesus’ times, archeologists discovered the ruins of an ancient city dating back to the Iron Age, approximately the 10th century BCE. The spectacular finds here include the remains of a palace and the largest and best-preserved city gate yet discovered in Israel.

Here, where the Jordan River flows from the Sea of Galilee southwards to the Dead Sea, it is believed that Jesus was baptized by John the Baptist (“Yardenit” is the diminutive form of the name of the Jordan River in Hebrew). In modern times, scores of pilgrims don white robes and get baptized in the same spot.

Nearby Kibbutz Kinneret hosts a Visitors Center that includes a place to rent or buy a white robe, shop for souvenirs, eat, shower and change. Several baptismal pools can be reached by following the Wall of New Life created by an Armenian artist from Jerusalem, which depicts the account from the Gospel of Mark (1:9-11) about the original baptism. 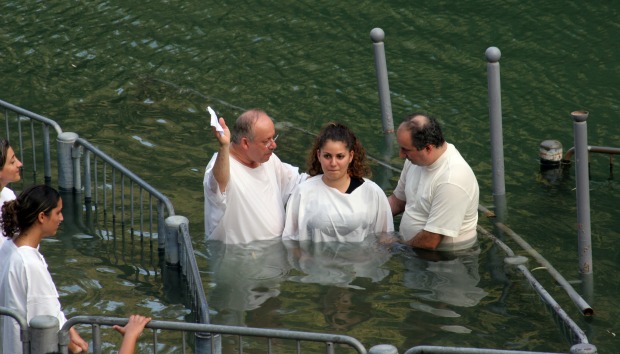 Baptism at the River Jordan. Photo by www.shutterstock.com

It was at Cana of the Galilee, hometown of Nathaniel (later known as St. Bartholomew) that Jesus was said to have turned water into wine at the wedding of a poor couple. The Greek Orthodox Church of St. George was built in the late 19th century on the site of the miracle. It houses two of the six stone jars that followers believe Jesus used in performing the miracle.

Today the Arab village of Kafr Cana, this is a popular place to hold weddings or renew wedding vows. The center of the village, which boasts several churches, has been renovated with a promenade and small plazas. 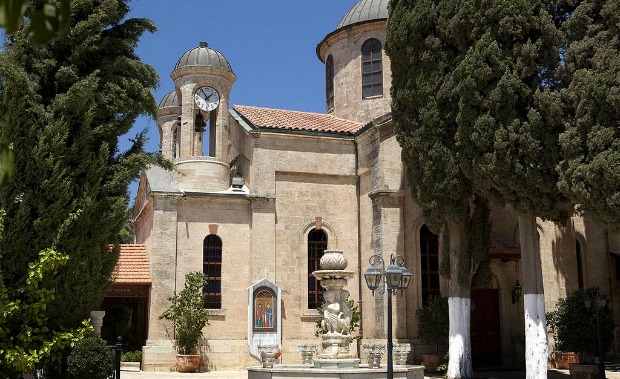 St. George’s Church in Cana. Photo by Mordagan for the Israel Ministry of Tourism

The 2,000-year-old city of Nazareth, with its 30 churches and monasteries, is a highlight of Christian trips to Israel. This city nine miles west of Mount Tabor is where Jesus most probably was raised, since the phrase “Jesus of Nazareth” appears 17 times in Christian Scriptures.

The official symbol of Nazareth is Mary’s Well. Tradition has it that Mary used to bathe young Jesus here, and both Moslems and Christians consider the well and its water to have unusual healing properties. Above the spring that feeds the well is St. Gabriel Church of the Annunciation. Greek Orthodox tradition maintains that this is where the angel Gabriel revealed to Mary that she would give birth to Jesus. The nearby Basilica of the Annunciation sits above the grotto where Roman Catholics believe Joseph and Mary lived.

At the entrance to Nazareth is the Mount of the Precipice, traditionally where the local citizenry escorted Jesus after he declared himself the messiah. 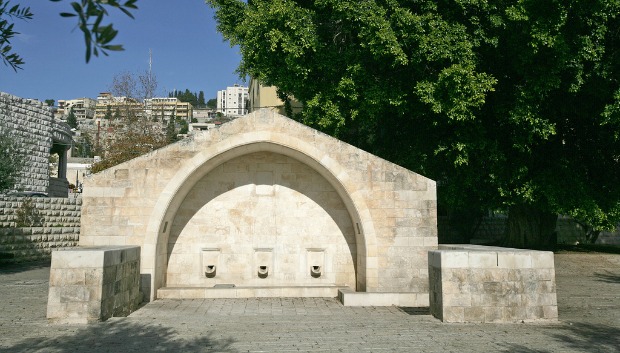 These two hiking trails, which differ slightly, allow Christian visitors to walk nearly 40 miles in Jesus’ footsteps along the path he probably took from his childhood home in Nazareth to the future center of his ministry in Capernaum. 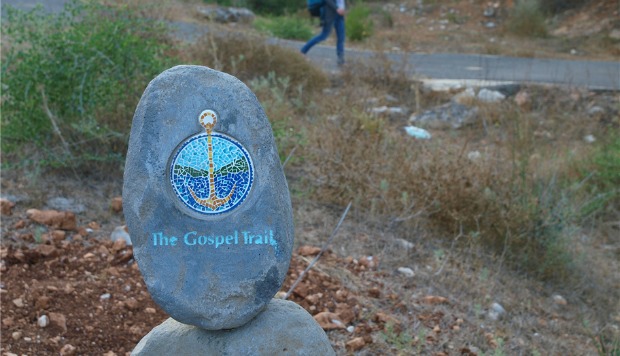 The Jesus Trail, completed in February 2008, is a private initiative. This route begins in Nazareth, passes through significant sites such as Cana, Arbel National Park, Tabgha and the Mount of Beatitudes, and ends some 16 miles later at Capernaum. Many pilgrims then board a wooden replica of a boat from Jesus’ time to cross the Sea of Galilee to Tiberias.

The Gospel Trail is a project of the Israel Ministry of Tourism and Keren Kayemeth LeIsrael-Jewish National Fund inaugurated in November 2011. The signposted footpaths and roads also begin at Mount Precipice near Nazareth, and be can be traveled by foot, bicycle or car.

UNCOVER ISRAEL - Get the ISRAEL21c
Weekly Edition free by email
Sign Up Now!
Bring Israel's story to life.
Millions of people around the world rely on us to gain a deeper understanding of Israel. We are the trusted source for original content you won't find anywhere else.
You can make a difference. Donate today to support journalism that brings Israel’s story alive.
SUPPORT ISRAEL21c
Read more on:   The Gospel Trail, Nazareth, Sea of Galilee, Travel, Things to do in Israel, Jesus Trail