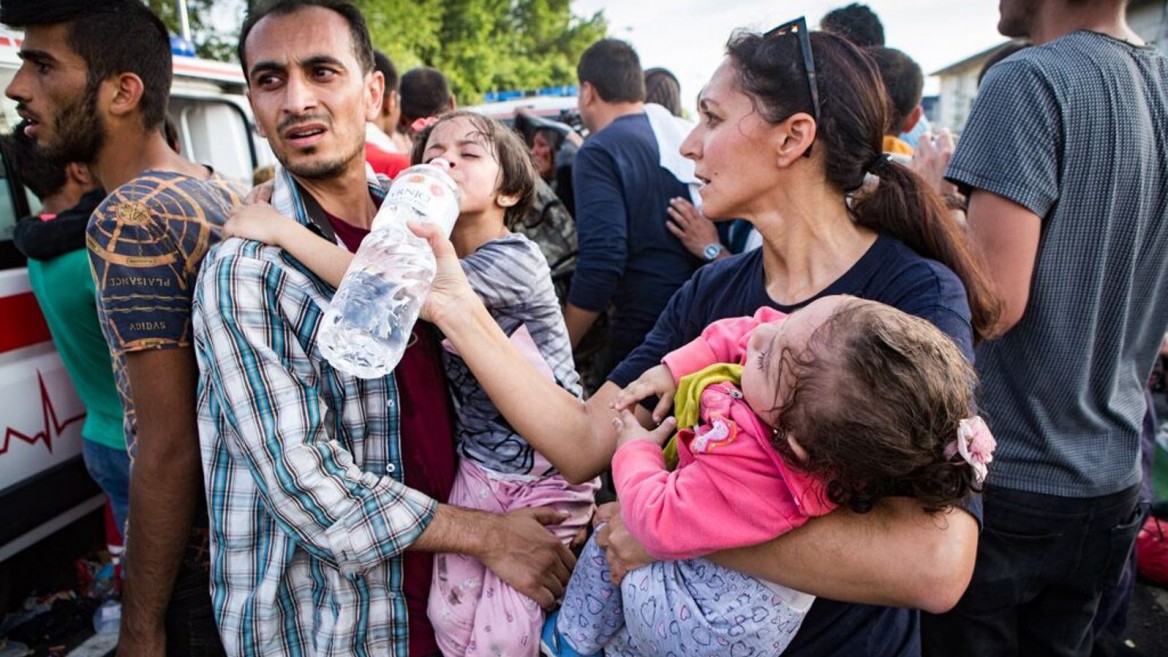 As she extends a helping hand to 2,500 refugees landing every day in Greece mostly from Iraq and Syria – sworn enemies of Israel – IsraAID global programs manager Naama Gorodischer does not announce that she is Israeli.

But if they ask where she’s from, the reaction is always the same: “They shake my hand, give me a hug and tell me they love me. It’s irrelevant where we’re from; when you meet people in such situations of vulnerability it makes everybody concentrate only on the human aspects of the care.”

Gorodischer was speaking to ISRAEL21c from the island of Lesbos, where about 17 boatloads of 50 refugees each are arriving daily. On September 13, she and other relief workers from IsraAID-The Israel Forum for International Humanitarian Aid rescued newcomers whose boat had overturned. 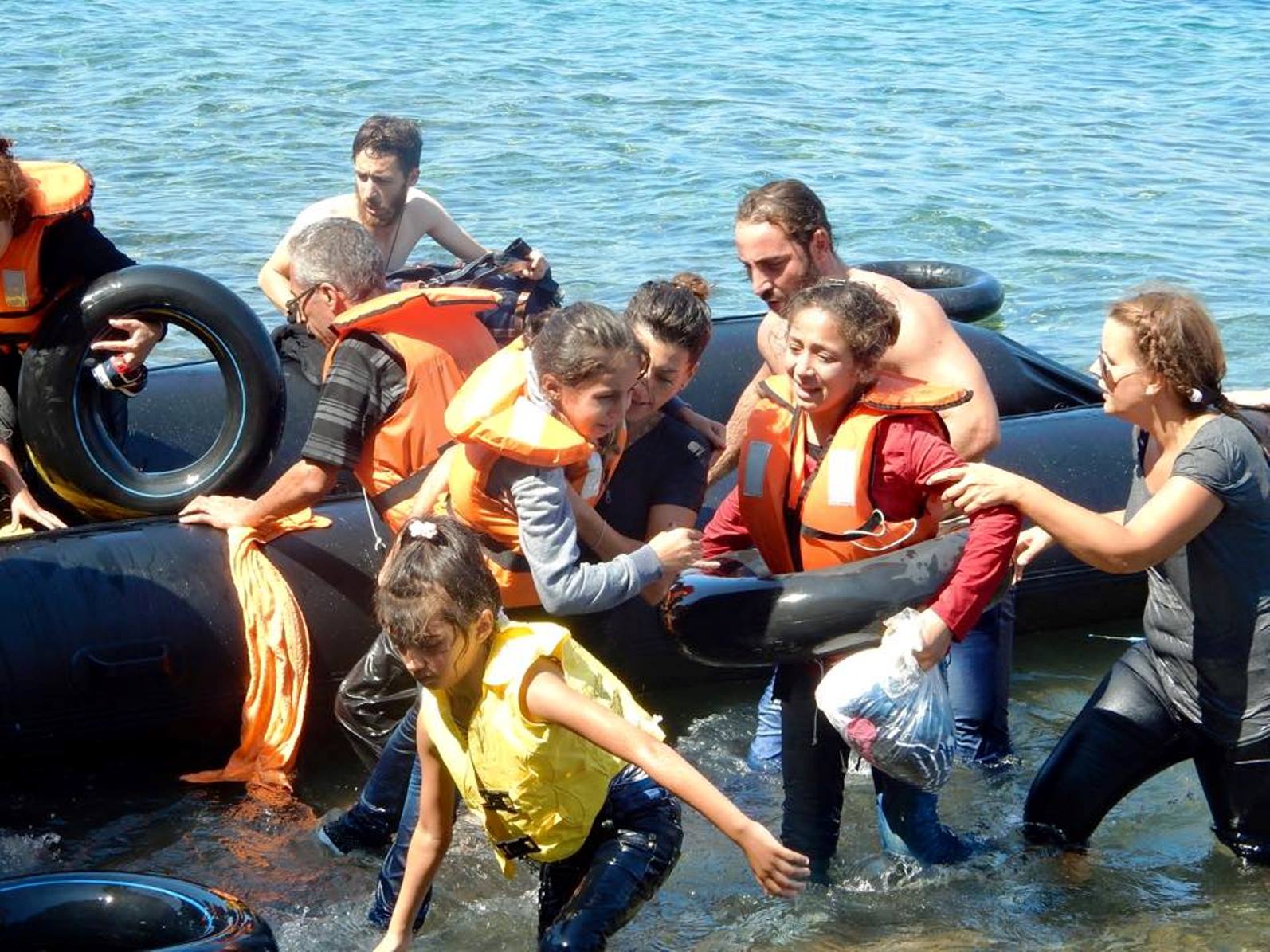 IsraAid volunteers including Naama Gorodischer, center, helping refugees reach the shore after their boat overturned off the Greek coast, September 13, 2015. Photo via Facebook

She does not want to dwell on that incident, however.

“Our being here is much more significant than the one event of rescuing people in the water,” Gorodischer said on September 17. “I’ve been to disasters in Kenya, Vanuatu, Myanmar and Jordan, and I have to tell you this is the most unfortunate, sad experience I have ever had.

“Though we have a lot of experience working with refugees – including Ebola survivors and earthquake survivors — usually we offer humanitarian aid in reception centers, trying to make their life better while they are there. Here we’re working with refugees on the constant move. They are not staying in Greece, and it makes our ability to offer proper humanitarian aid very different and challenging. It’s very intense.”

‘I’ve been to disasters in Kenya, Vanuatu, Myanmar and Jordan, and I have to tell you this is the most unfortunate, sad experience I have ever had.’

When the migrants reach shore, she sees them shouting and waving, kissing the ground, taking selfies — and then starting to panic as they realize their journey is far from over.

“It is devastating for them to understand that they have to walk for days to a registration point, and then take a boat somewhere else. Sometimes we see despair, but they tell us they’re just happy to be out.”

In addition to Iraq and Syria, there are refugees from countries including Afghanistan, Pakistan, Sudan and Somalia. Most of the 10 IsraAID staffers and volunteers currently on the ground in Greece and Serbia/Croatia are Arabic speakers, including an Arab-Israeli nurse, social worker and psychologist. Among those working closely with Gorodischer are Dr. Tali Shaltiel and social worker Orli Ungar.

Caught in the riots

On September 13, two IsraAID volunteers came from Israel to assess the needs of thousands of refugees trying to enter Hungary from Serbia. They coordinated their efforts with UN and other relief organizations.

Hungary sealed off the border that evening and redirected people to a different crossing, but communication difficulties and the sheer number of those in need left about 2,000 refugees unsure of where to turn next. The Israelis found themselves in the midst of riots as migrants burned tires and threw rocks. Authorities responded with teargas and water cannons.

“I’ve been in this industry a long time and I have yet to see anything like this,” Rachel Lasry Zahavi tells ISRAEL21c, speaking on the road as she and IsraAID medic Mickey Noam Alon headed for the Serbia-Croatia border, to where passage is shifting. They hope to offer psychosocial support and distribute necessities.

Like Gorodischer, Zahavi (the Canadian-born wife of IsraAID founder-director Shachar Zahavi) has helped at many a disaster scene but this one was different.

“A humanitarian disaster on European territory is quite new, and the usual policies don’t necessarily apply. On the sides of the highway we see families walking, not sure where they’re going. We saw one beautiful Afghan family with a five-year-old girl walking to the Hungarian border, and we stopped them and gave them bananas and told them the border was closed. People just don’t have information.”

Zahavi and Alon had come by way of Belgrade, where they purchased arts-and-crafts activities for the many children waiting at the Hungarian border. 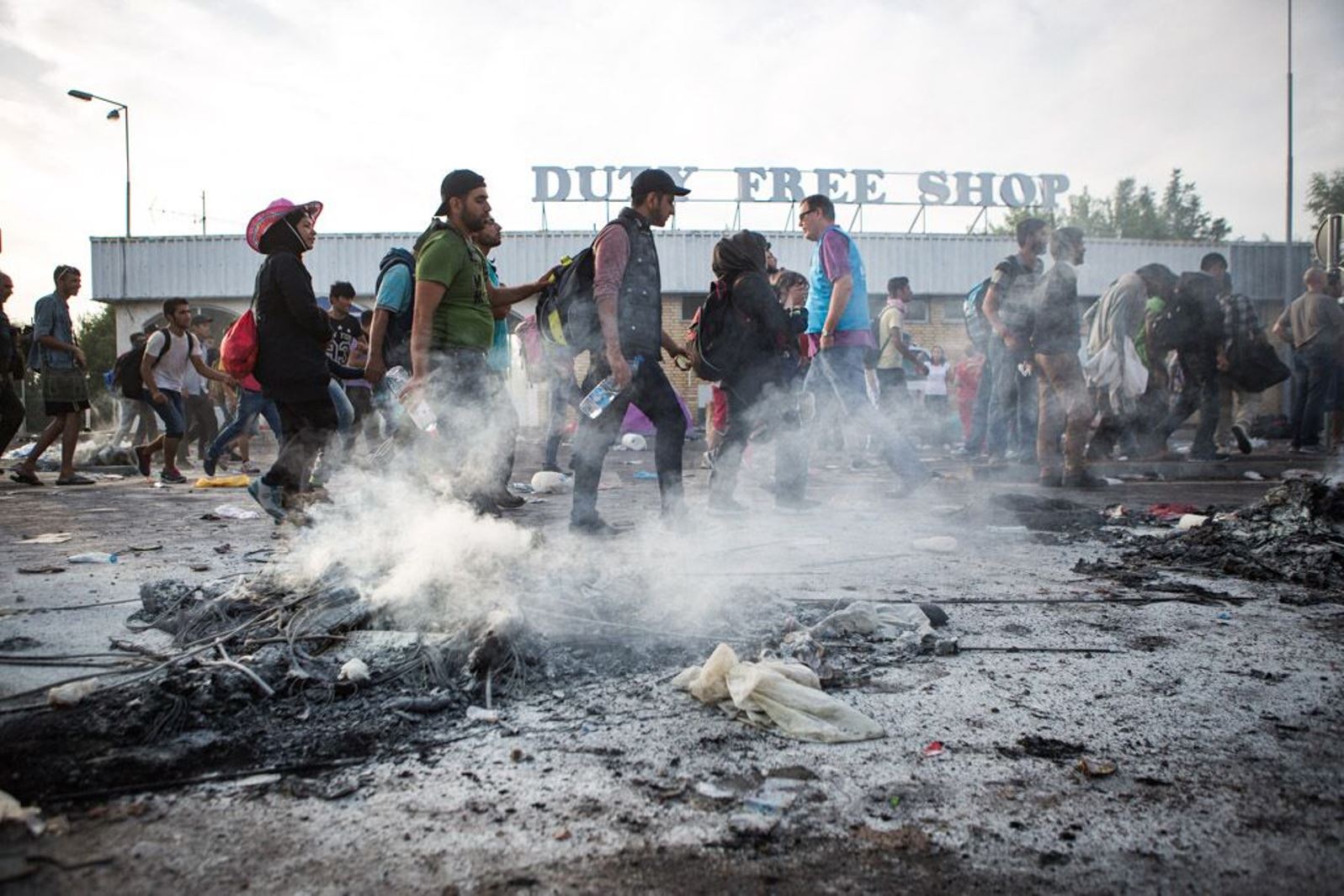 IsraAID helped refugees caught up in the rioting on the Hungary border. Photo courtesy of IsraAID

“We had all the supplies and we were preparing a mother-child tent when the riots broke out, so instead we helped take about 50 children away from the riots and the teargas,” says Zahavi. “Mickey handed me a baby and said the mother was left somewhere at the border and the father didn’t know what to do with his two kids.”

Zahavi held the baby and helped the father wash teargas from the girls’ eyes. “In the midst of the chaos, we quickly put together snack packs for all the children with a variety of foods and drinks to cheer them up.”

Alon and Zahavi distributed dozens of baby carriers and baby slings donated by Israelis. Zahavi gave her own Baby Bjorn carrier, which she had used for her children, now aged three and six, to an Afghani refugee. “Parents were just thrilled with the carriers,” she says.

‘Mickey handed me a baby and said the mother was left somewhere at the border and the father didn’t know what to do with his two kids.’

Zahavi stresses that a range of relief organizations are all working together with the United Nations Higher Commission for Refugees.

“UNHCR is doing a great job and the coordination mechanism here is fantastic. Everyone is pooling resources and doing distributions. It’s been wonderful to be part of an international response, working together to respond quickly to the rapidly changing needs on the ground.”

When she and Alon tell refugees they are from Israel, they often hear “Oh, we love Israel!”

“We’re showcasing Israel in such an incredible way,” says Zahavi, who plans to return to Israel on September 20. “We have an amazing talent pool, including Arabic-speaking professionals, and we’re well-received.” 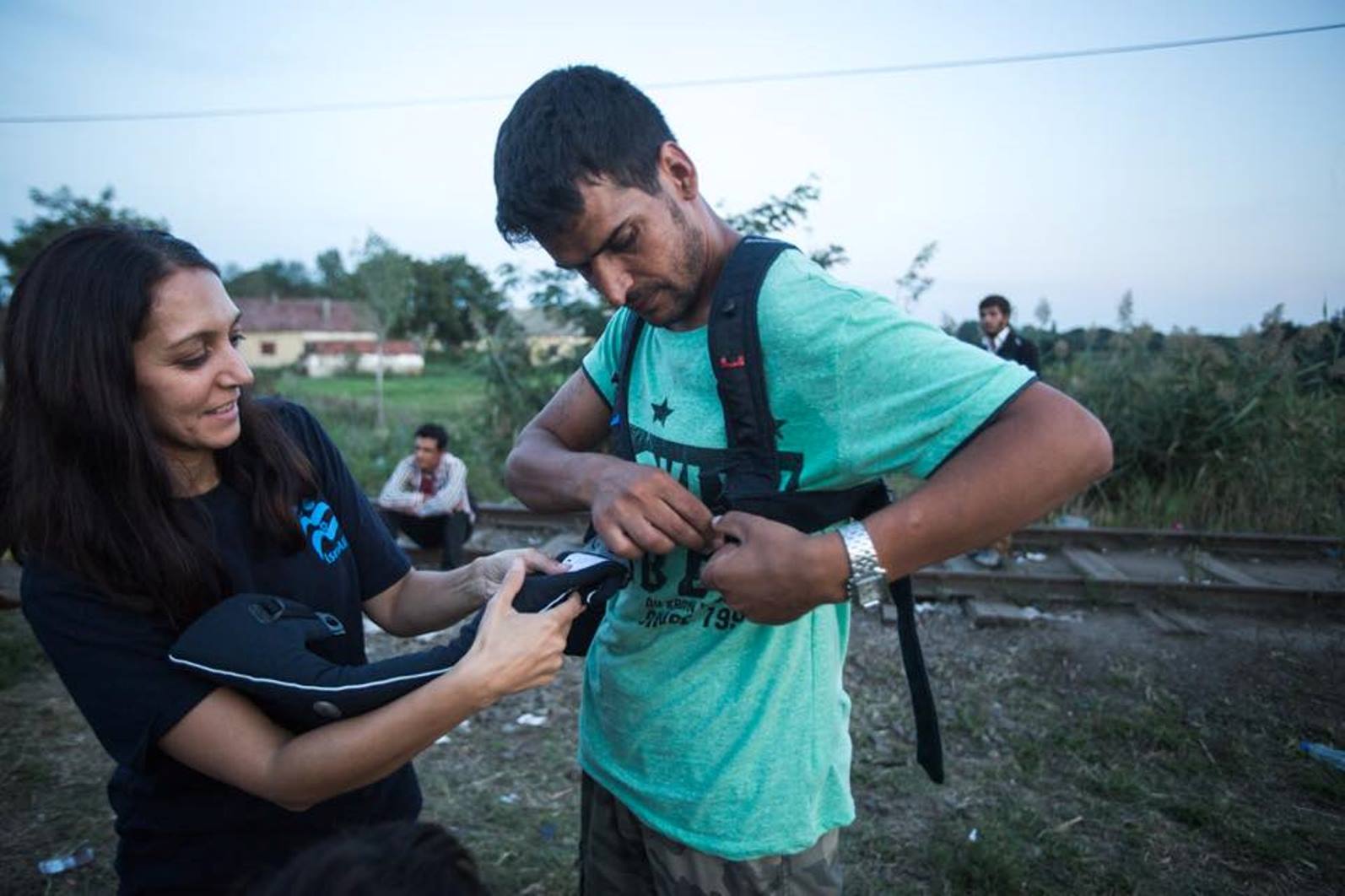 Most of the migrants have never met a Jew, let alone an Israeli, adds Gorodischer.

She notes that in Lesbos, the overwhelmed government asked her for Israeli help in bringing over street-cleaning trucks. The effect of 2,500 refugees arriving per day has been mass rubbish, she says, with discarded boats and lifejackets littering the beach, human waste in the streets and trash everywhere.

“The Greek people are frustrated, and I feel it’s not out of racism or xenophobia but out of the change of life that this imposes,” Gorodischer explains. “Lesbos is a tourist destination and now there are 20,000 refugees in the street. They have the will to help, but it’s a disaster.”

She adds that IsraAID is prepared “to be an integral part of whatever efforts will be made long-term.”

UNCOVER ISRAEL - Get the ISRAEL21c
Weekly Edition free by email
Sign Up Now!
Bring Israel's story to life.
Millions of people around the world rely on us to gain a deeper understanding of Israel. We are the trusted source for original content you won't find anywhere else.
You can make a difference. Donate today to support journalism that brings Israel’s story alive.
SUPPORT ISRAEL21c
Read more on:   Social Action, IsraAid, Humanitarian Aid, Europe refugee crisis, refugee