“Complaining and saying how terrible things are and how everything is wrong never helps.”

“Between 11th and 12th grade, after a tough fencing session, I saw a television report about all these elderly people and Holocaust survivors and their difficulties and loneliness. It really shocked me and I was really, really sad and depressed for a couple of days,” recounts Yakov Pizenberg. “I told myself that being sad won’t help these elderly people and that I want to do something to aid them.”

Pizenberg got an idea: “A very good friend of mine worked at a bakery and I told him, ‘If you can, bring me some of the pastries that are left over at the end of the day and I’ll pop over to the assisted-living residence near my house and distribute them to the elderly.’”

And just like that, a network that aids some 400 senior citizens across the southern city of Ashkelon was born. Today a 21-year-old soldier, Pizenberg was only 17 at the time, busy dividing his time between school and being Israel’s fencing champion for his age group.

The elderly people he called on were surprised and heartened by his visit, so he kept at it. Once or twice a week, he and a growing group of friends ended up visiting around 70 seniors in the first year of their endeavor. 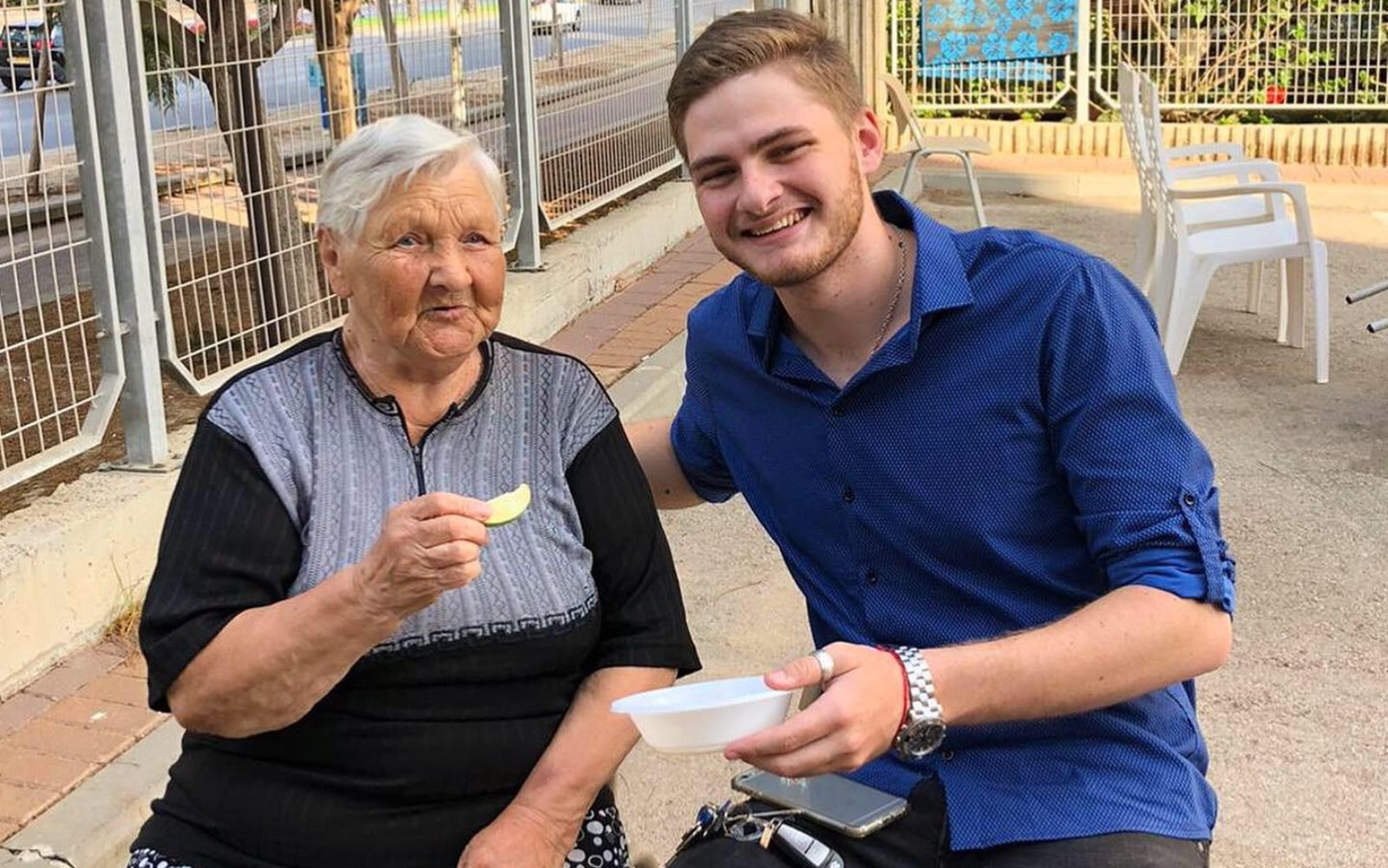 Yakov Pizenberg, at right, enjoys a snack with a senior citizen. Photo: courtesy

“We listened to and we saw people who in their everyday life are transparent – and we saw them as people.”

Pizenberg’s project, Youth for an Equal Society, gained momentum and won several prizes including, most recently, the President’s Prize for Volunteerism. 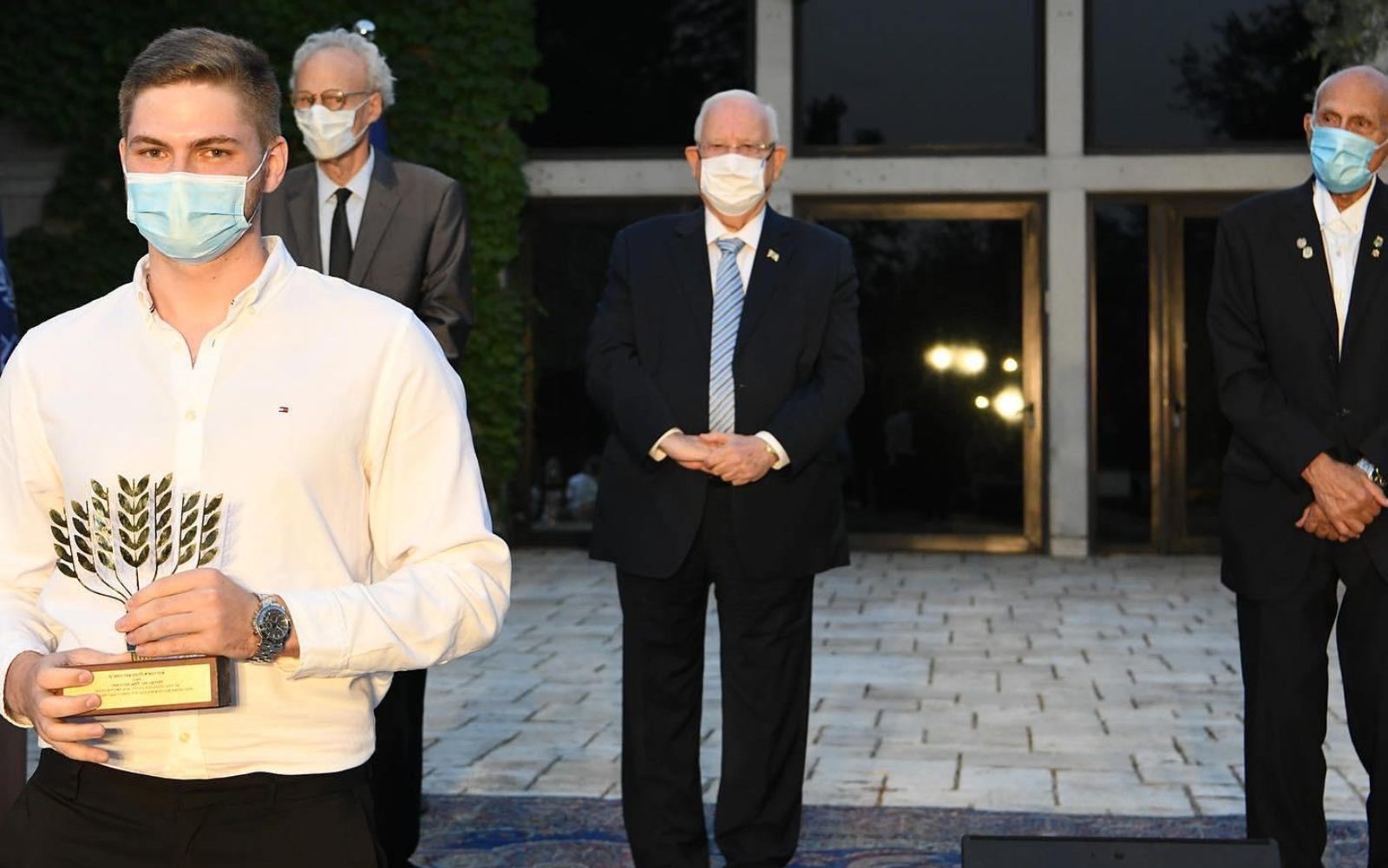 The Ashkelon municipality began supporting the work, and in the past few years it grew to encompass 120 teenage volunteers from high schools across the city.

Before the coronavirus crisis erupted, they regularly visited around 400 elderly people every week. 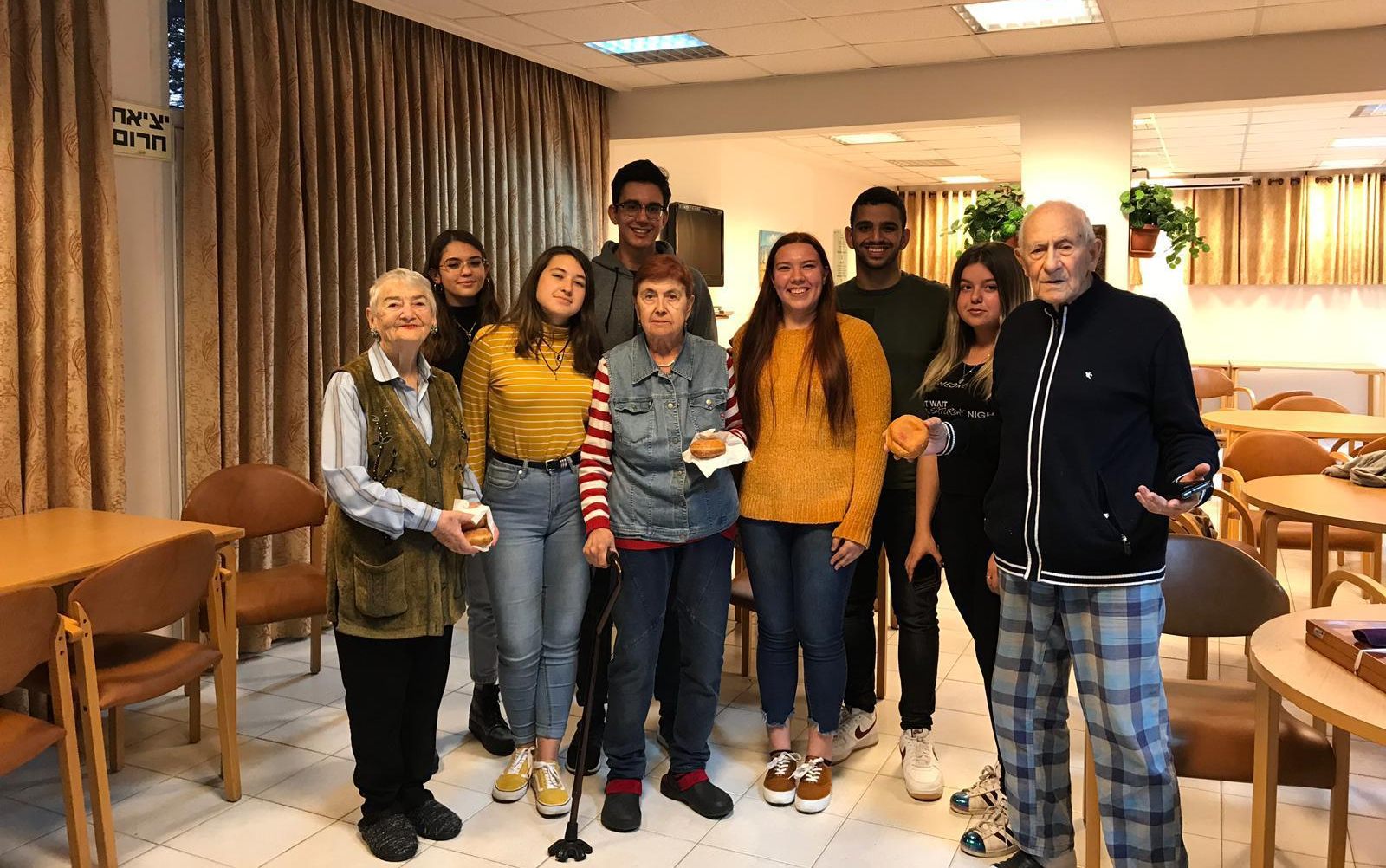 “Most of them are lonely elderly people, I mean elderly people who as fate would have it have been left alone in the world,” Pizenberg says. A lot of them come from socially and economically disadvantaged backgrounds.

Pizenberg’s project has 14 teenage counselors who underwent Education Ministry training as well as internal training. Each is responsible for a different aspect of activity – birthday celebrations, being in touch with bakeries across the city, or updating the project’s Instagram account.

“There are quite a few stories of teenagers who enlisted in the army and carry on calling and visiting the elderly people,” he says. “A very, very special relationship is formed, and it’s amazing to see it.”

Covid-19 has of course greatly impacted their work. Back in March, the project decided to stop visiting the elderly people and to telephone them instead. 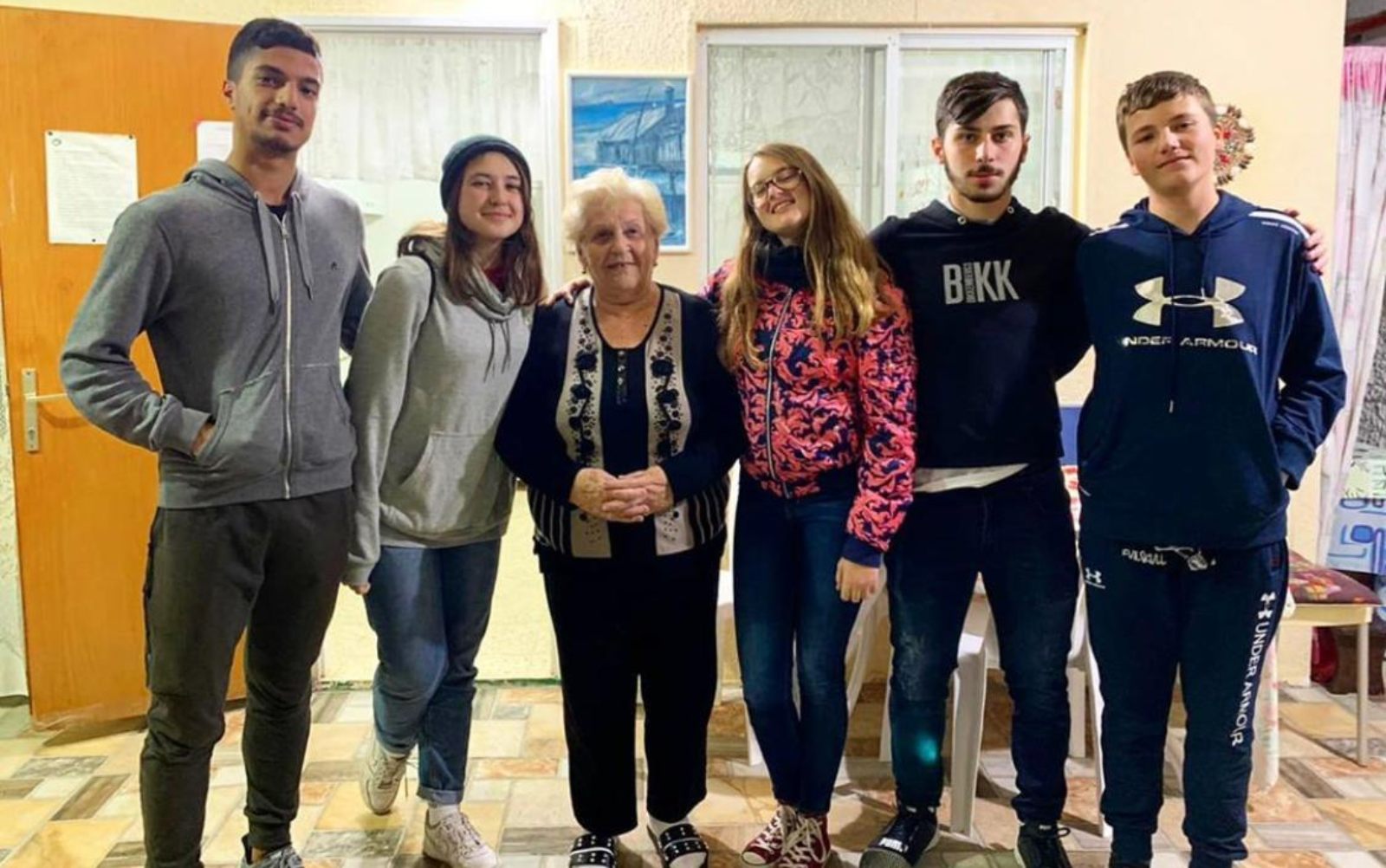 “It was clear to us that to come visit the elderly people in groups is a huge risk,” Pizenberg says.

“In conjunction with an appeal by Ashkelon City Hall, we began helping its welfare department and we took upon ourselves an additional 70 seniors across the city,” he says. “The main difficulty during corona was in reaching all the elderly people who needed immediate help.”

Youth for an Equal Society assigned a few seniors to each volunteer. That volunteer calls each senior three times a week.

“If the elderly person was in need of something we’d straight away turn to city’s welfare services who would immediately help, and we’d also go out to deliver food and when possible also medicines,” he explains.

Material needs aside, the volunteers also provided the elderly people with much-needed support and attention. On Passover, for example, which was celebrated during lockdown, many elderly people joined their volunteer’s family Seder night via video.

As someone who’s seen at close hand what the pandemic has done to the elderly, Pizenberg notes its disastrous effects.

“Loneliness kills. Elderly people are hurt twice by corona. They’re hurt by the disease itself, which kills mostly elderly people, and they’re equally hurt from the loneliness,” he says.

“This loneliness has a devastating effect on elderly people. Quite a few of them haven’t seen their families for half a year already,” he adds. “I’d recommend to just phone your grandfather and grandmother and connect with them, be there for them. Sometimes a five-minute conversation can be life-changing.”

While Pizenberg is having some trouble recruiting new volunteers due to schools remaining shuttered, he has big plans.

“It’s important for me to convey to teens that if they see something broken they should try and fix it,” he says. “Complaining and saying how terrible things are and how everything is wrong never helps.”

“If at home something’s out of place then we fix it,” he concludes. “It’s important to do the same thing for the country.”