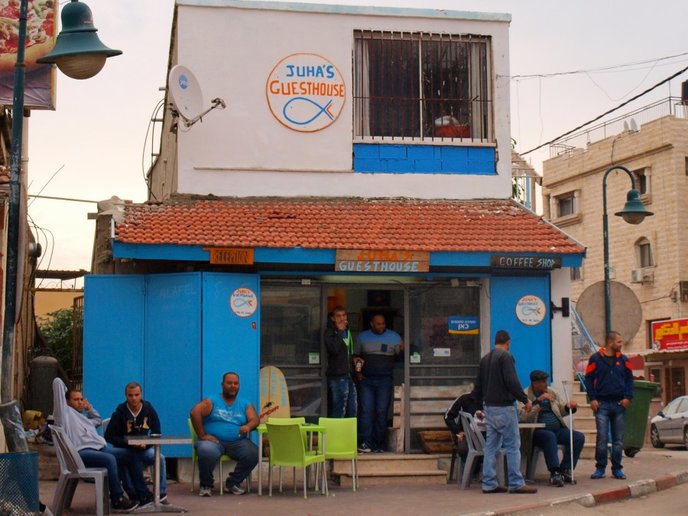 Hilton and Sheraton are not likely to build hotels in Jisr az-Zarqa, the only Arab village on the Israeli coast of the Mediterranean Sea.

But a pair of Israeli visionaries – one Jewish, one Arab – saw tourism potential in the modest fishing village. In January last year, they opened a backpackers hostel, Juha’s Guesthouse,  which was chosen as the best social business in a competition sponsored by Bank Hapoalim and the newspaper Yediot Aharonot last December.

For vacationers and hikers from across the world, the hostel provides a thrifty base from which one can reach the beach in five minutes, the Crocodile Stream Nature Reserve in 10 minutes and upscale Caesarea in 45 minutes along the Israel Trail. Guided tours and activities such as a surfing lessons  and crafts are available.

In an area where the two main forms of employment are fishing and housekeeping, Juha’s Guesthouse has injected a jolt of hope for the local economy. Some residents are now giving workshops in traditional handicrafts such as embroidery; some are hosting traditional meals for a fee; and others are establishing new shops. 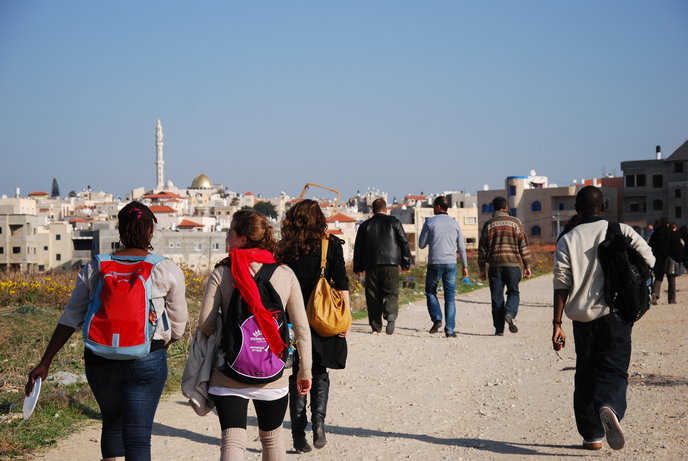 Juha guests setting out on a hike.

“In the year since we opened, we can honestly say things in Jisr have changed a lot,” co-owner Neta Hanien tells ISRAEL21c.

“The media liked our story and it brought a lot of Israeli visitors on weekends, not to stay at the guesthouse but to explore the village. More small businesses are opening and more people are starting to believe they can do something in their own village to make a living. They turn to us and ask our advice.”

And so the guesthouse, which raised its initial NIS 92,000 in capital through a Headstart crowdfunding campaign, began another Headstart campaign to support a Made in Jisr startup hub. 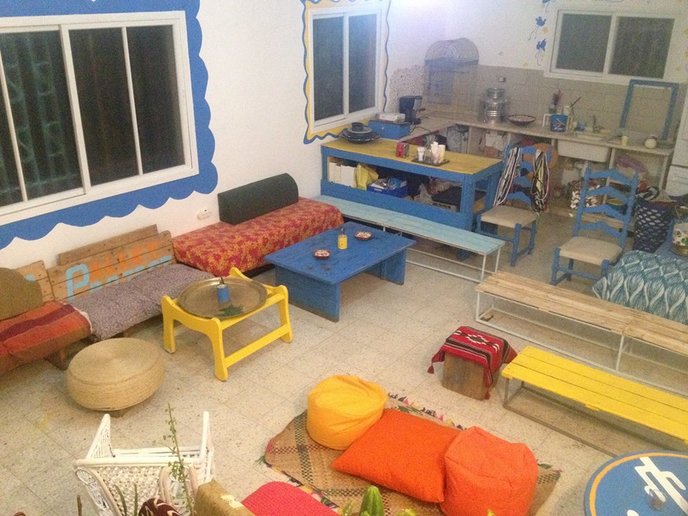 Made in Jisr Startup Hub.

“We give entrepreneurs access to the Internet and computers, which many of them don’t have at home, and teach them how to use social media to promote their businesses,” says Hanien. “We arranged to bring in the Ministry of Tourism to run a course for local new entrepreneurs.”

The first client they’re helping worked all his life in a cheese factory and now wants to open a visitor center in his home to show people how he milks his goats and makes cheese.

In addition, Made in Jisr will mentor local high school students in an effort to encourage a new generation of tourist entrepreneurs and local leaders dedicated to community improvement.

Hanien, now the 36-year-old mother of four young children, used to be a criminal prosecutor in the Ministry of Justice.

“But before that, I used to travel a lot and I was a scuba-diving instructor at the Red Sea and the Sinai, where I first got to know the Arab community and fell in love with the combination of authentic Arab culture, the sea and fishermen,” she explains.

Her mother, a filmmaker in Caesarea, took Hanien along one day as she was making a short documentary about the fishermen of Jisr az-Zaqa. She befriended some of them and was enchanted with the village. 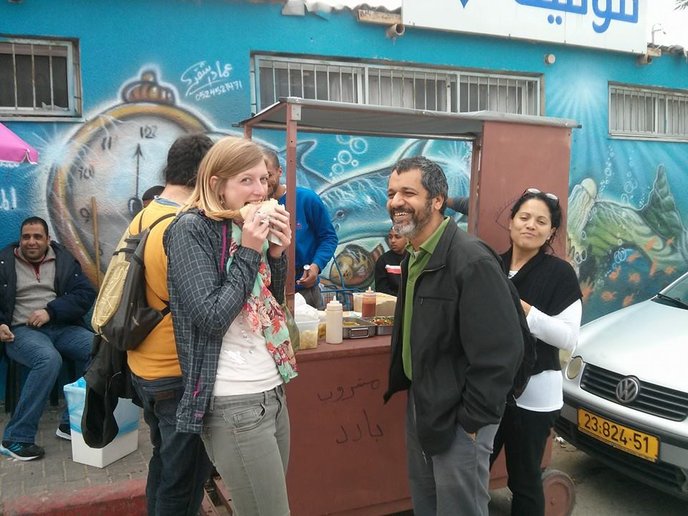 “It reminded me of small, isolated, poor villages I’d seen abroad, and I knew that even one initiative to draw backpackers can turn the whole reality of a place around and make it into a tourism destination. I thought Jisr would be a perfect destination for travelers in Israel looking for an off-the-beaten-path experience on a low budget,” says Hanien.

“A lot of Israelis who have traveled around the world have this dream in the back of their minds to run their own hostel. I had that too, and I thought this is the time to do what excites me.”

Her research took her to Maoz Inon, owner of the award-winning Fauzi Azar Inn in Nazareth  and a partner in the successful Abraham Hostel in Jerusalem. 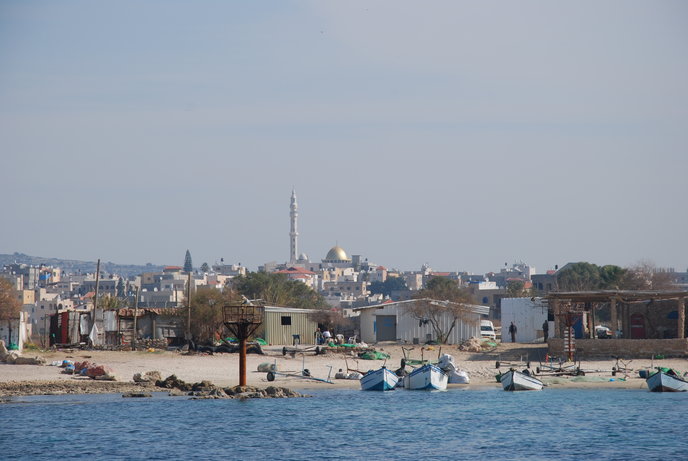 The view from Juha’s Guesthouse.

“I told Maoz my idea for Jisr, and his eyes lit up. He’s become my mentor and helped us a lot,” says Hanien. “I found out about his network, ILH-Israel Hostels. Once you open a guesthouse and belong to ILH you’re on the tourism map.”

She still needed to find a home for her venture, so she went door to door in Jisr searching for a partner until she met Ahmad Juha, a father of seven who runs a café and local Ramadan tours for Israeli groups.

“He also dreamed of developing tourism in Jisr, but didn’t think of a guesthouse because he hadn’t traveled around the world like I did,” says Hanien, who communicates with Juha in Hebrew. 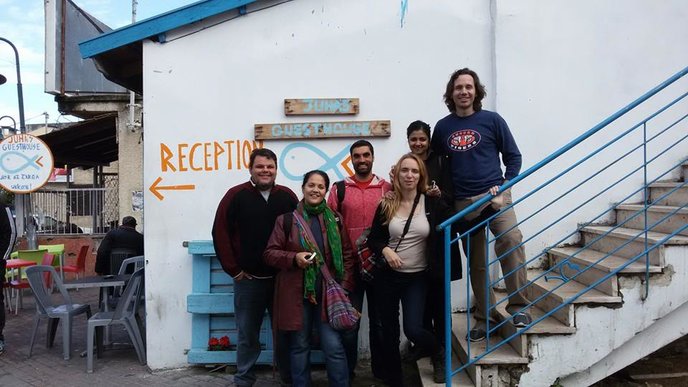 Backpackers from around the world find Juha’s Guesthouse.

Juha, 47, owns the building in which his coffee shop is located. He and Hanien used the Headstart investments – most of them from Israelis interested in coexistence projects — to add a reception area on the first floor and renovate the second floor to accommodate an eight-bed dorm, two double rooms and two shared bathrooms.

“Right now we can sleep 12, but we’re opening three more double rooms so we will soon be able to sleep 20,” says Hanien. The rules say all guests must be over 18 years old, though she says they make exceptions sometimes.

Juha’s Guesthouse is an ILH member and its charter stipulates that the owners can draw a maximum of 50 percent of the profits while the other 50 must stay in the company to benefit its social activities.

“So far we have not turned a profit,” Hanien confides, but it’s only a matter of time.

“We will do all we can to label the village as a tourist destination and invest money and time to promote the whole village and encourage other local people to start their own tourist initiatives,” she says.