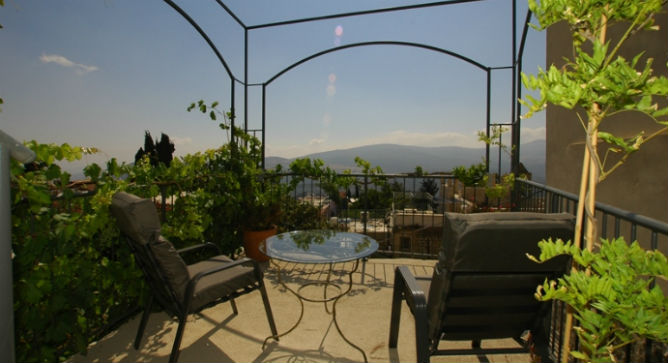 The view from the Artists’ Colony Inn.

Nearly six years ago, an American expatriate couple bought an old stone house in the Artists’ Colony in Safed (Tzfat) — the mystical Galilee city of kabbalists and artists — and transformed it into a boutique bed-and-breakfast.

Jeff and Benay Katz’s efforts paid off handsomely when the popular travel website TripAdvisor awarded the Artists’ Colony Inn the top slot on its 2012 “Travelers’ Choice” list of the top 25 B&B’s and inns in the Middle East.

“I was blown away by its character, comfort and charm,” one former guest gushed.

That’s just the sort of reaction Benay was hoping for when she was sweating the details of the enterprise that fulfilled a lifelong ambition.

“It was her dream to open an inn for, like, forever,” says Jeff, to whom Benay channels press inquiries.

He emigrated to Israel from Toronto with his parents in 1972, and she came on her own in 1975. They married the following year and raised a family, living in the Jezreel Valley town of Timrat for 25 years. Jeff was a civil engineer and licensed tour guide; Benay worked in high-tech and was an award-winning volunteer at Emek Medical Center in Afula. 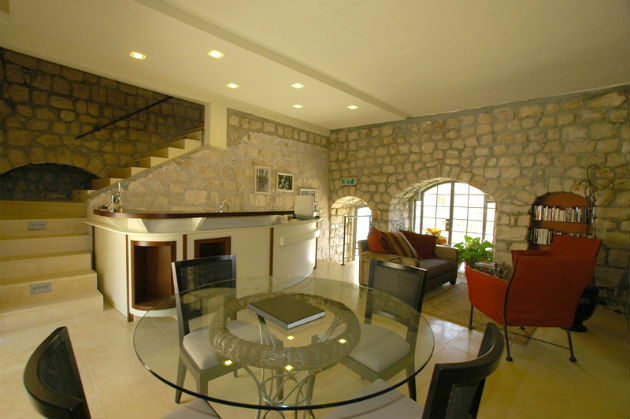 The lobby adds an unusual touch to a B&B.

“We traveled quite a bit with our kids in Europe and the States, and we always camped out or stayed in B&Bs, so she knew exactly what she wanted and what people would be looking for,” says Jeff.

“She really wanted to host people in Timrat, but they didn’t allow B&Bs so we looked at other places. As a tour guide, I started meeting wonderful people in Tzfat and got to know some locals. We saw the house we’re in on a Sunday and owned it on Monday.”

The big old stone building — Jeff estimates it to be a few hundred years old — was constructed around inner courtyards, affording scenic mountain views. It had enough space for private living quarters on the second floor. 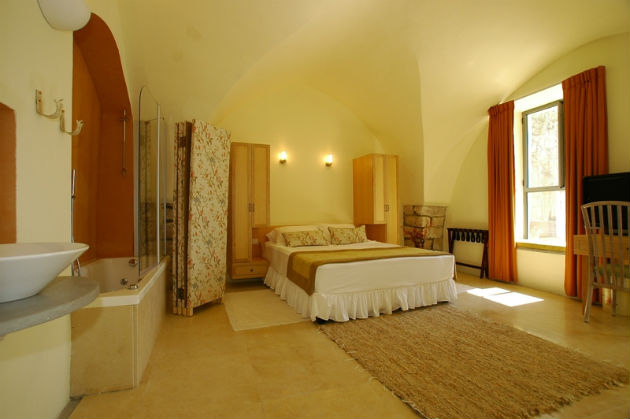 One of the inn’s four suites.

“That was a must — to live on the property with the people,” he says. “Also, there was room for a lobby, which most B&Bs do not have. In the evenings, we serve coffee and cookies in the lobby and it’s like a living room.”

Above all, its location couldn’t be beat. “We chose it because it’s close to the galleries and historic synagogues. You can leave your car and walk around the Old City.” 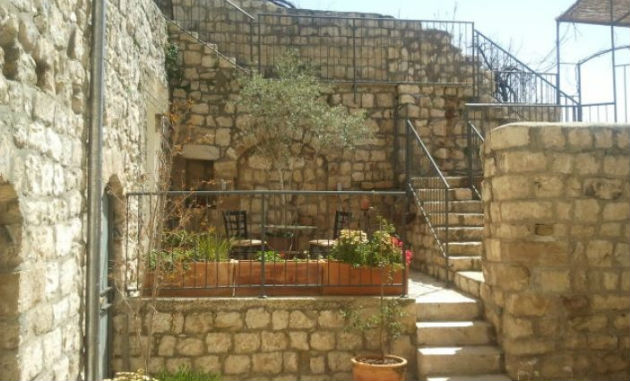 The Artists’ Colony Inn is situated among the winding alleys of Safed’s Old City.

The property is in the heart of the city’s famous artists quarter, in spitting distance of the iconic Ruth Rimonim Hotel, a 77-room facility built on the foundations of a 17th century Turkish khan’s residence.

The previous owner had subdivided the house, and the Katzes redid the place from top to bottom. “It was a lot of fun, because in Tzfat you find rooms behind walls since the houses were built and destroyed in different earthquakes, so rooms got closed in over the centuries,” says Jeff. 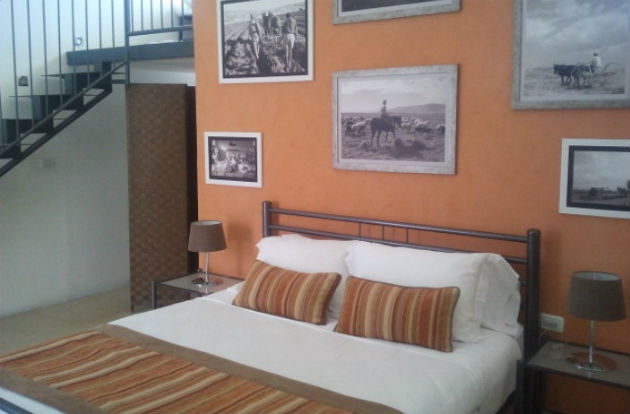 A duplex suite at the inn.

It took the Katzes a year and a half to finish renovations, paid for out of their own pocket. Benay spent about three months just choosing the mattresses for the four guest rooms.

“All the furnishings and knickknacks took her forever to buy,” says Jeff. “We wanted to give our guests a comfortable feeling, so everything is included. There is even complementary Wi-Fi.”

As is typical for boutique hotels in Israel and elsewhere, no two rooms at the Artists’ Colony Inn look alike. Each plays up different natural materials such as wood, metal and stone. One room boasts a double Jacuzzi.

“We hired a Tel Aviv architect, Ofir Asiass, who has designed similar places in France and Italy. His concept was that whatever is old stays old,” Jeff explains. They chose a few basic colors for new added elements such as handmade tiles in the washrooms.

“In our own small way, we are helping Tzfat continue to develop into a world-class tourist destination,” says Jeff.

B&Bs are tops in the Galilee

As empty nesters, the Katzes decided to accept guests in a similar stage of life: “People our age, plus or minus — 40s to 60s — no kids under 13, no backpackers.”

From day one, the Artists’ Colony Inn was a mom-and-pop project. “This is our fulltime job,” says Jeff. “I do one-day tours from the inn. If we go away on vacation, we close up. We don’t trust our reputation to anybody else.”

Apparently that reputation has grown rapidly in the three years since opening day. “About 30 percent of our business now is referrals and return visitors,” Jeff reports. Most guests are foreigners, although Israelis tend to book weekend stays. “We even have people coming from Tel Aviv for one night.”

The additional Israeli establishments that made the Trip Advisor top 25 list included five others in the Galilee — the Barbakfor, Frenkels Bed and Breakfast, Rosh Pina-Nof Psagot in Rosh Pina, the Fauzi Azar Inn in Nazareth and Vered HaGalil Holiday Village Hotel — along with the Lutheran Guest House in Jerusalem and Eden House in Tel Aviv.

UNCOVER ISRAEL - Get the ISRAEL21c
Weekly Edition free by email
Sign Up Now!
Bring Israel's story to life.
Millions of people around the world rely on us to gain a deeper understanding of Israel. We are the trusted source for original content you won't find anywhere else.
You can make a difference. Donate today to support journalism that brings Israel’s story alive.
SUPPORT ISRAEL21c
Read more on:   Travel, Explore Israel, Safed, B&B, Trip Advisor, Places to stay in Israel