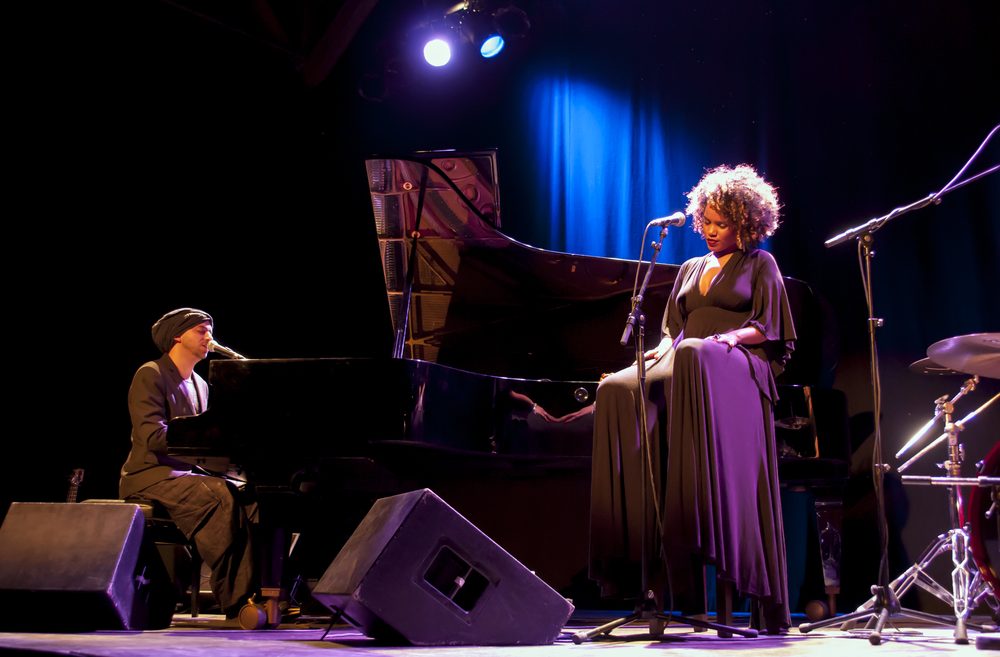 Idan Raichel ,Cabra Casay and friends perform in Germany in 2014. Photo by Shutterstock

To understand the music of a country is to understand the culture. Experts agree that music is one of the best language-acquisition tools, but even if you don’t know the lyrics you can still get a sense of the wide variations in styles and cultural avenues that exist here in Israel, just by rocking out to the tunes.

Such a small country, yet so much musical talent! Here are the 21 top Hebrew musical albums of the last few decades. Listen to them all, and you’ll get the musical education that all Sabras have, helping to weave the Israeli pop-culture tapestry as we know it today.

If you’ve got a favorite Israeli album not listed here, let us know in the comments section below.

An album recorded in Raichel’s parents’ basement, The Idan Raichel Project is a one-of-a-kind record that celebrates Israeli populations usually not represented on the mainstream pop culture scene.

Exploring the cultural narrative of Ethiopian, Iraqi and Yemenite Jews, this cooperative album is strung together by Raichel’s addictive melodies and all-around musical skill. A world-music hit back in 2002 and 2003, this album is still played regularly on Israeli radio.

Representing what Israelis call a “shanti” vibe, this dreadlocked singer-songwriter of Yemenite and Iraqi Jewish background combines reggae vibes with thoughtful lyrics, with Middle Eastern, rock and big band influences. His songs are modern benchmarks in the catalog of Israeli pop music culture.

Taking their band name from a certain affair involving a US president in the early ’90s, this alternative rock band’s song lyrics are just as clever. This 1995 album is a classic of the era, which quickly went gold after its release — no easy feat for a band in such a small country.

Coming out just before his cousin Eviatar Banai’s album (see No. 16), Ehud Banai’s more soulful rock-centered album produced quite a few hits that can still be heard over Israeli radio waves. On the music scene since the 1980s, these songs are some of his most well-known, and with good reason.

Many of Israel’s now 30-somethings were raised on the songs of HaYehudim, representing the Israeli grunge-rock scene of the mid-1990s.

Rocking out with the best of their time, they are known for their strong female and male vocals, brooding angst, and the cathartic nature of their performances.

Songs off the album every Israeli knows: “Kach Oti” (Take Me), “Ela”

Among the first on the Israeli rap scene, Hadag Nachash — literally “The Snake Fish,” a play on Nahag Chadash (new driver) signs on the cars of student drivers — bring their own style to the genre, adding in funk and experimenting with different instruments such as horns , saxophone and flute.

“Chomer Mikomi” came as a solid mid-career album for this multi-member Jerusalem-based band known as known for its non-stop touring schedule, diehard fans and lyrics that touch on everything controversial from drugs to politics.

Songs off the album every Israeli knows: “Mah Naaseh” (What are We Going to Do), “Shirat Hasticker” (The Sticker Song), “Rak Po” (Only Here)

An American-Israeli who immigrated to Israeli with his family in 1969, Yermi Kaplan has been on the Israeli rock scene since 1977. However, it’s his 1995 album, “Boker Tov,” that perhaps represents the artist’s sound best, with multiple hits like the ones listed below that have aged gracefully.

An influential power player in the music since his teen years, the singer-songwriter-producer and television personality’s outspoken and controversial persona can be best seen in his 1996 album, “The Letter.”

Playing like a personal diary of lyrics set to catchy hooks, it is among his most classic pieces of work.

One of the defining bands of the late 1980s and ’90s, Ethnix dominated radio waves with a strangely inviting combination of electro-pop, rock and Mizrahi style music. Representing the undeniably diverse population of Israel itself, this album is a perfect sampling of its sound and the story it tells.

A pop icon for the Israeli LGBT community, Ivri Lider has stood the test of time, continuing to produce thoughtful dance hits and guitar-strumming ballads since the 1990s until today. You’d be hard pressed to listen to the radio for a day without hearing this artist’s songs, both old and new.

One of Israel’s most well-known rock bands from the 1990s, Eifo Hayeled remains an influential force, albeit retrospectively, today. The songs from this 1998 album are nostalgic and never forgotten for most Israelis, seeing as how they are still played on a regular basis by Israelis radio DJs.

Songs off the album every Israeli knows: “Nafalta Chazak” (You Fell Hard), “Rak Bishvil L’kabel Chibuk” (Just to Get a Hug), “Lavan Bachalom Shachor” (White in a Black Dream)

A truly gifted folk/pop songstress with hints of Middle Eastern influence, Din Din Aviv spills her guts in this 2006 album, and it will enchant you. From beautiful lyrics, to her particular brand of vocals, you’ve just got to hear it to understand.

Songs off the album every Israeli knows: “Mukeret Li Mipaam” (You’re Familiar to Me from Long Ago), “Sodotai” (My Secrets), “Cholemet” (Dream)

With another member of the famous Banai family (Yuval) as their frontman, Mashina has become the very definition of Israeli rock and roll, and therefore should definitely be on your list of Israel bands to get to know.

This album is a live concert version of their 1995 album, “Mechonat Hazman” (Time Machine), because rock is always better live.

A ragtag group of eclectic musicians, Shotei Hanevuah produced this classic record that shows off their complicated vocal harmonization and a capella-like riffs through a series of modern Israeli hits.

This was the record that helped earn them the title “Israeli band of the year” in 2005, with the hefty contribution of superstar Avraham Tal (see No. 17), who left the group in 2007 to pursue a solo career.

Songs off the record every Israeli knows: “Kol Galgal” (Sound of the Wheel), “Yedia” (Knowledge), “Mi” (Who)

One of only two albums ever put out from this award-winning group, this 2007 disc is the perfect sampling of new-age Israeli folk-pop.

Many of the songs are sung in English and Hebrew, and with flawless three-part harmony, which takes the music back to a time when vocals were of the utmost importance.

Songs off the album every Israeli knows: “So far,” “I Love You,” “Ever”

If you find yourself in a pensive yet slightly depressed mood, then you might want to check out the music of Eviatar Banai.

Hailing from one of Israel’s most famous entertainment families, his sorrow-filled musical style is rooted in poetic piano ballads. This early album showcases some of the singer-songwriter’s best work, both by way of piano and painfully beautiful lyrics.

Songs off the album every Israeli knows: “Haze’ev Veha’ayala” (The Wolf and the Deer), “Taharut Klavim” (Dog Race); “Matanot” (Presents)

Once the lead singer of the band Shotei Hanevuah, Avraham Tal broke away to make his own successful solo career in the late 2000s and has yet to look back.

“Orot” contains hits that show off Tal’s pensive songwriting and strong vocal cords. No matter where you are, there’s no doubt that these are the ones you’ll want to be belting out.

Songs off the album every Israeli knows: “Orot” (Lights), “Mehuzakim L’Olam” (Strengthened to the World), “Im At Holechet” (If You Go)

A folk-reggae, new soul, multi-talented Israeli diva, Karolina is a must-know of the Israeli music scene. Exemplifying how world musical influences come together to create a new laid-back Israeli style which relishes in repackaging the vintage feel of the 1970s, Karolina’s music is also light and fun enough to enjoy anytime.

Songs off the album every Israeli knows: “Tzar Li Charlie” (Forgive Me Charlie), “Af Ehad Lo Ba Li” (No One’s Coming for Me)

With soft guttural tones sung to melodies accompanied by quiet piano stokes and Mizrahi flute trills, this 1999 album is his presentation of the striking beauty that his cross-cultural songs embody.

Songs off the album every Israeli knows: “K’she’at Atzuva” (When You’re Sad), “Oolai Hapaam” (Maybe This Time(, “Yesh Li Chalom” (I Have a Dream)

Eccentrically cool hipsters in flashy outfits, Static and Ben El Tavori are among the most popular new artists on the Israeli music scene.

Not bound by any one genre, they mix Mizrahi music with pop and rap, to make something that you’ve just got to hear to understand. Upbeat fun tunes and lyrics mean that if you go to any Israeli party, you’re most likely going to hear at least one of their songs, so get familiar before you head out.

Bringing a harder edge to Israeli hip-hop, Subliminal has always made his presence known on the scene. Grabbing attention with urban beats and his clever baritone raps mixed with unforgettable hooks, this was the album that had every Israeli singing along in the early 2000s.

Songs off the album every Israeli knows: “Hafinale” (The Finale), “Hatikva” (The Hope), “Yeled Rehov” (Street Boy), “Ani Yachol” (I Can)

If you’d like to read more about Israeli music, why not try out article 16 of the Greatest Hits Albums from Iconomic Israeli Artists

UNCOVER ISRAEL - Get the ISRAEL21c
Weekly Edition free by email
Sign Up Now!
Bring Israel's story to life.
Millions of people around the world rely on us to gain a deeper understanding of Israel. We are the trusted source for original content you won't find anywhere else.
You can make a difference. Donate today to support journalism that brings Israel’s story alive.
SUPPORT ISRAEL21c
Read more on:   Culture, Israeli music