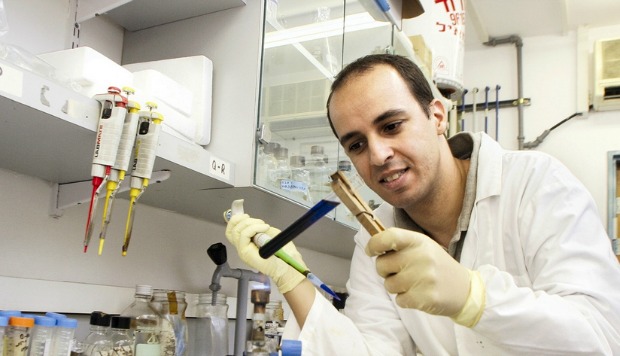 Israeli researchers have discovered that carefully regulated high-fat meals can lead to loss of weight and a unique metabolism in which ingested fats are not stored, but are used for energy in between meals.

In the past, it was thought that feeding mammals a high-fat diet would disrupt the metabolism and lead to obesity, but lead researchers Prof. Oren Froy and Prof. Zecharia Madar of the Hebrew University of Jerusalem believed that careful scheduling of meals would regulate the biological clock and reduce the effects of a high fat diet.

In animal tests, the researchers fed a group of mice on a high fat diet on a fixed schedule for 18 weeks. The mice ate at the same time and for the same length of time every day.

All four groups of mice gained weight during the experiment, with a ﬁnal body weight greater in the group that ate an unscheduled high-fat diet.

In addition, the mice on the scheduled high-fat diet exhibited a unique metabolic state in which the fats they ingested were not stored, but rather used for energy at times when no food was available, such as between meals.

“Our research shows that the timing of food consumption takes precedence over the amount of fat in the diet, leading to improved metabolism and helping to prevent obesity,” said Prof. Froy. “Improving metabolism through the careful scheduling of meals, without limiting the content of the daily menu, could be used as a therapeutic tool to prevent obesity in humans.”

The results were published in the FASEB Journal.

UNCOVER ISRAEL - Get the ISRAEL21c
Weekly Edition free by email
Sign Up Now!
Bring Israel's story to life.
Millions of people around the world rely on us to gain a deeper understanding of Israel. We are the trusted source for original content you won't find anywhere else.
You can make a difference. Donate today to support journalism that brings Israel’s story alive.
SUPPORT ISRAEL21c
Read more on:   News, Prof. Oren Froy, high-fat diet, obesity, metabolism, Hebrew |University of Jerusalem