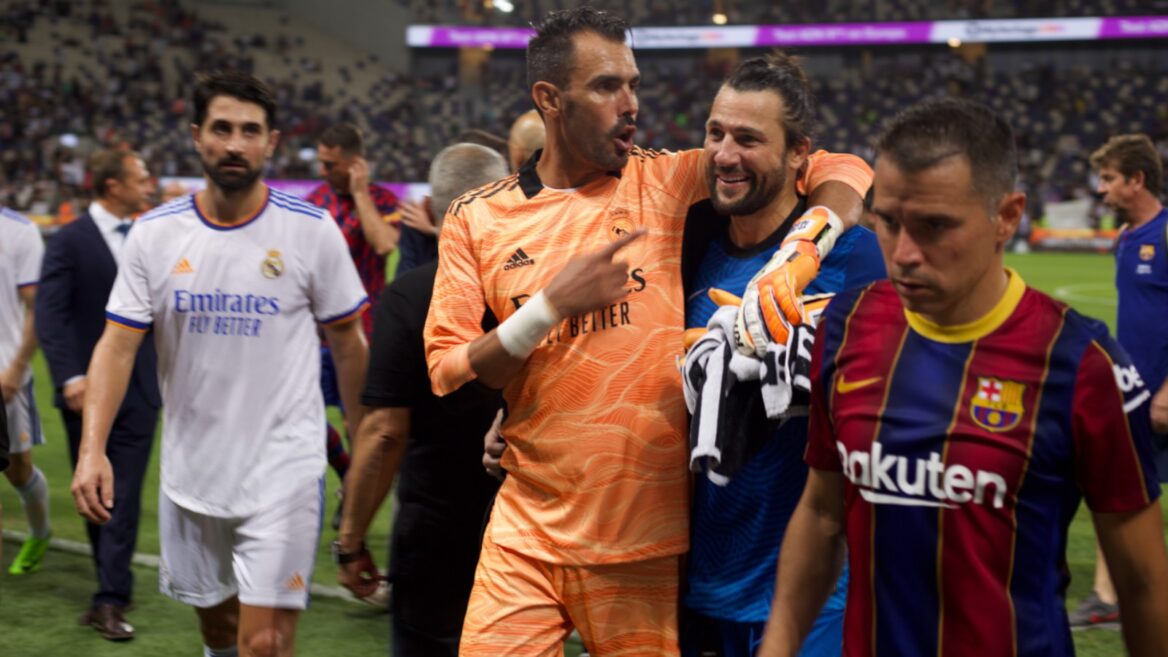 The goalkeepers of Real Madrid Leyendas and Barça Legends greet each other at the end of the first half of the match. Ahead of them, the Argentine Javier Saviola. Photo by José Apoj

Some passions are timeless. After love or hate, the passion for soccer is the most popular passion in the world and some of its historic protagonists have earned immortality.

In Israel, a little country in love with sports in general and soccer in particular, the passion for two European clubs divided the waters for decades. These teams are Real Madrid and FC Barcelona, the ​everlasting protagonists of “El Clásico.”

Ronaldinho, Rivaldo, Deco, Figo, Roberto Carlos…  As an Argentinian and Israeli who loves the most beautiful game in the world, I could perfectly recite some historic lineups of any of these Spanish teams, especially of the last 30 years, whether it is the “Galacticos” or the Johann Cruyff’s “Dream Team.”

That passion led me to Tel Aviv to watch a historic match between both clubs with a special seasoning: each team formed with legends from the recent decades of Spanish and international soccer.

Attending The “Game of Legends,” organized and sponsored by the Tel Aviv municipality and produced by MTR7, was for me the chance of being as close as possible to the “classic among the classics.”

It was strange for me — surely not just for me — to return to a massive event after the restrictions imposed by the Covid-19 pandemic in Israel and the world. But that is precisely why I wanted to give a warm welcome to the players.

The setting was extraordinary: Bloomfield Stadium’s 29,400 seats were packed, full of colors and good vibes. 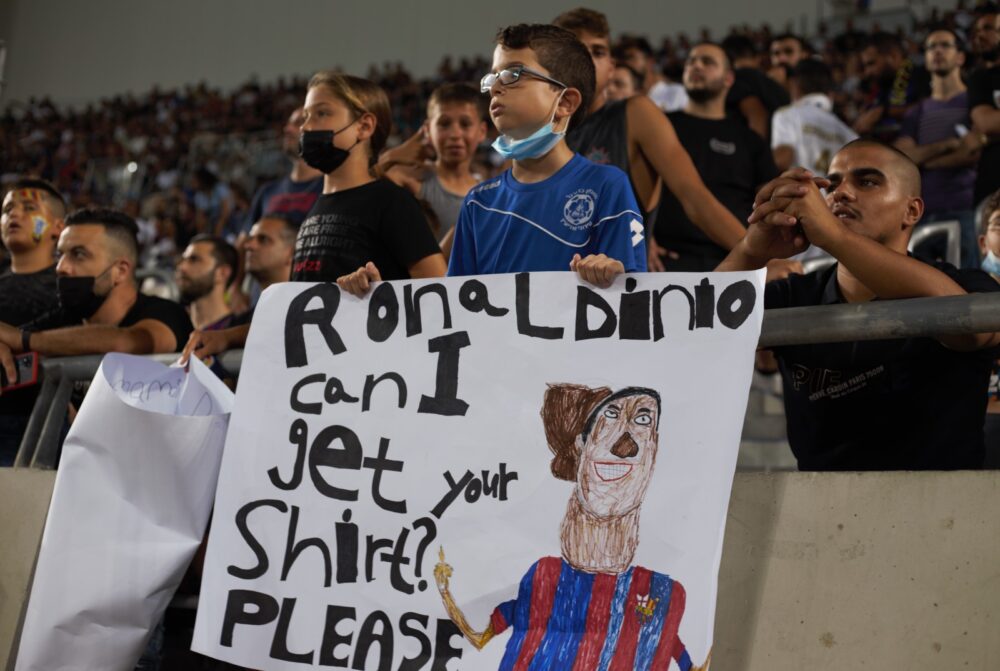 FC Barcelona and Real Madrid fans filled the stands at Bloomfield Stadium in TelAviv. Most of them were kids. Photo by José Apoj

I liked the choice of referee: Sapir Berman, who a few months ago announced the gender change process that she went through.

Berman is the world’s first transgender referee, and her selection reaffirms the identity of Tel Aviv, the city I live and love, regarding LGBTQ+ pride.

The event was scored by international DJ Skazi.

Without going into impossible comparisons, I’ve played soccer all my life and today, at 49 years old, I’m also a veteran of this sport. With that background, I watched with admiration how the players showed their best skills.

The game was even and the axiom that says despite age the quality is not lost was demonstrated once again on the Bloomfield pitch.

In my life, most of the ovations went to Diego Maradona and the players of my beloved Boca Juniors but being able to praise sports geniuses like Ronaldinho was incredible. 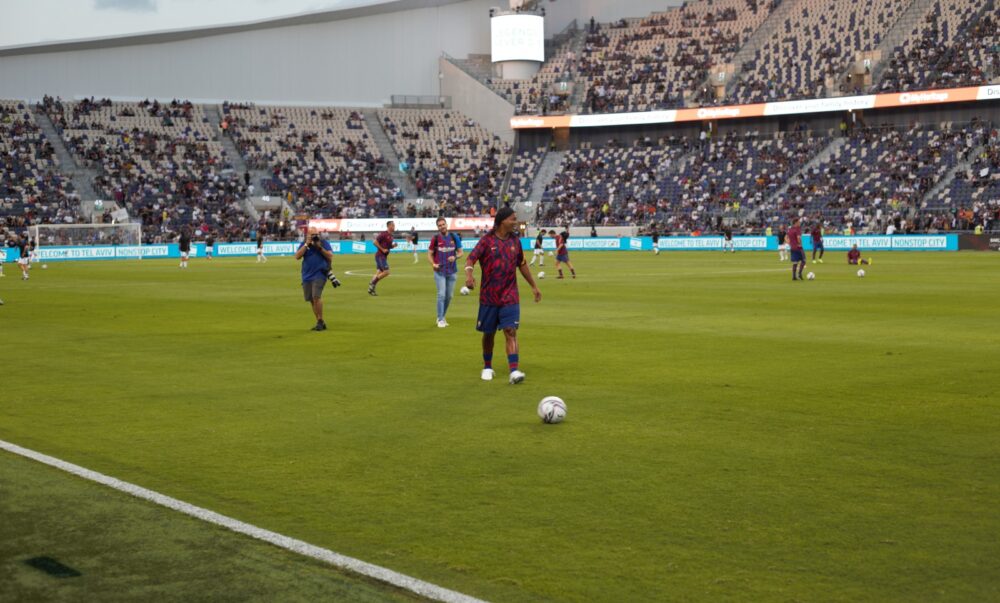 The general ovation was for Ronaldinho. Photo by José Apoj

The Brazilian former player was the ultimate star and the object of most of the applause. He opened the score with a penalty in the 27th minute of the first half. Such is the love that people have for the former Brazilian legend that two children jumped onto the pitch to hug him.

A white, blue and red tide

At 42, Munitis tied and two minutes later Real Madrid outplayed Barça with a goal by Alfonso. I prayed for the tie because that would give the match the extra spice of the penalty shootout.

In the second half of the game, at minute 60, Jofre Mateu’s goal came to put the match at 2-2 but the tie only lasted 10 minutes because De la Red scored the last goal of the night. 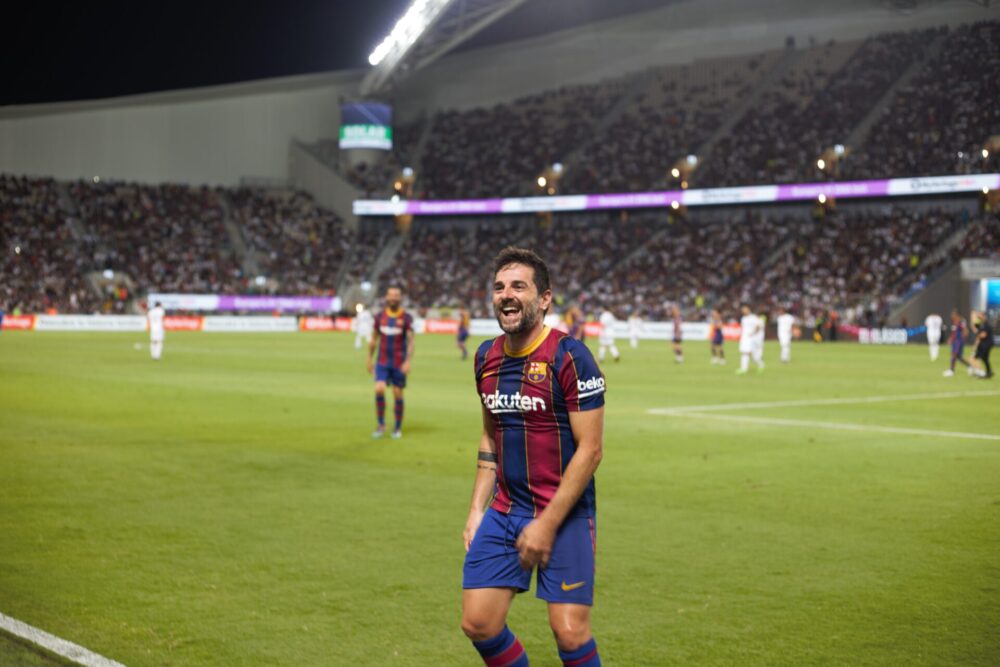 Jofre Mateu (FC Barcelona) tied the game 2-2 but it was not enough for the Cules. Photo by José Apoj

The time expired, the Madrid squad received the trophy and I joined the general standing ovation. Then I went out to the streets of Jaffa, surrounded by a white, blue and red tide.

It had been a wonderful day colored by the combination of yesterday’s splendor with the additional joy of being able to dribble a bit away from the global uncertainty of these days.

Maybe last night’s atmosphere was a kind of statement that any past time was better but I believe that whenever a ball rolls across the green grass of a stadium, people will feel united and happy again.

27 minutes: Ronaldinho (BCN) from a penalty

70 minutes: From the Network (MAD)

In addition to the emotional match, the FC Barcelona players participated in solidarity acts such as a talk with children on the autism spectrum and a rally with players from the amputee team. 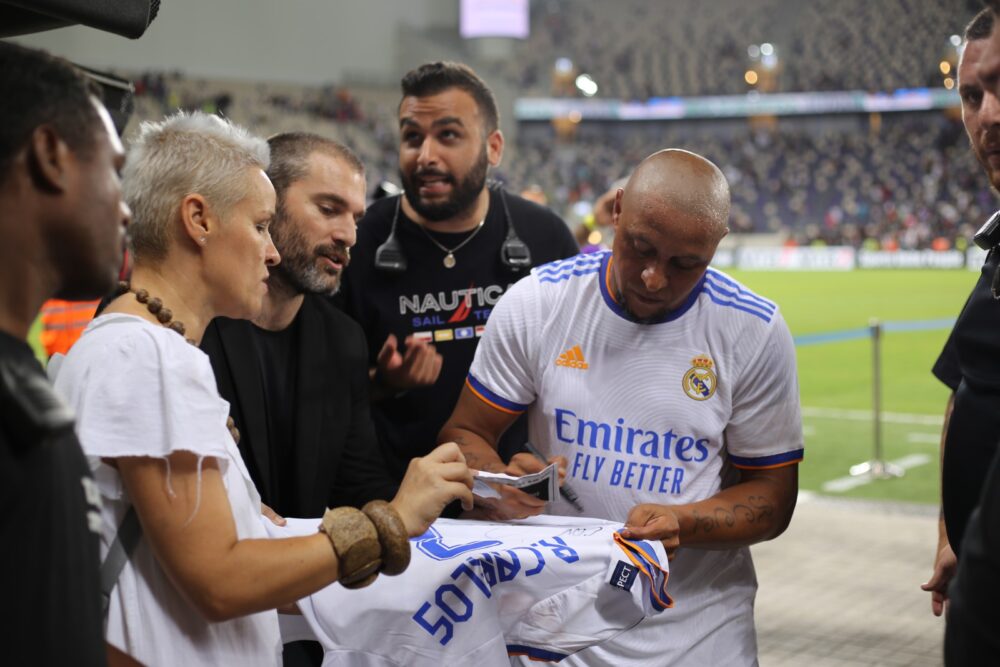 The match also coincided with the opening of “Barça, The Exhibition,” which opened on July 18 at the Toto Hall in Holon and will be open until the end of August.

The exhibition offers a journey through the history of FC Barcelona and gives the opportunity to enjoy a virtual match at the Camp Nou stadium with the use of state-of-the-art technologies.

Mariano Man is the editor of ISRAEL21c en Español.