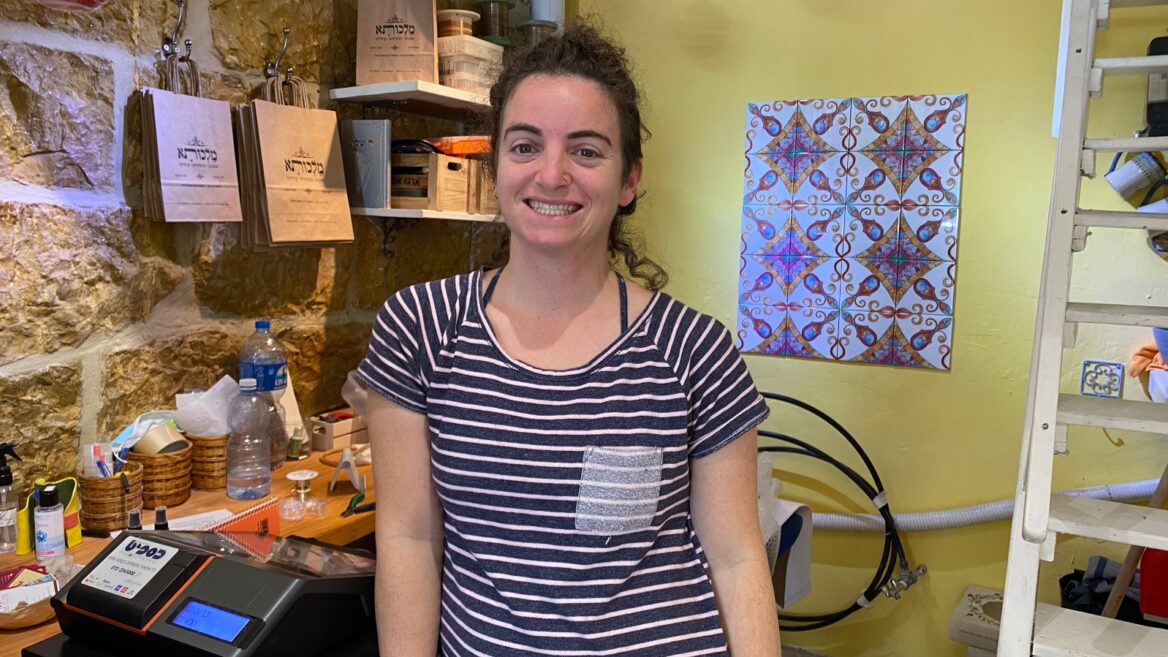 The crushing effect of the coronavirus pandemic on employment, tourism and retail has triggered a wave of new home businesses – everything from facemask sewing to personal catering.

The crisis has others adapting their existing businesses or finding new ways to generate income that don’t require customers to venture out of the house.

There are even entrepreneurs testing traditional retail options as customers slowly return to public spaces.

Let’s take a look creative new enterprises brightening the scene in Israel during these difficult days.

Business was booming for Inbal Baum, head of Delicious Israel culinary tours. “I didn’t have a care in the world until March 7 hit,” she tells ISRAEL21c.

To make matters worse, her husband’s high-tech startup had folded in February.

Baum and her spouse, Tal Ater, didn’t have time to sit around being depressed. They started two new offshoots of Delicious Israel.

First, they began offering virtual food tours and cooking classes. “It’s going really well,” Baum says. “We wouldn’t have done this otherwise and it has turned into a great opportunity to connect Israel in a non-political way with Jewish groups, federations and summer camps overseas.”

“A lot of companies are looking for new ways to connect with clients,” says Baum. “This idea would never have been of interest before but now they see the potential.”

The roster of about 50 experts ranges from a Portuguese pastry maker to an Italian pasta maker to a Singaporean chef. Some are Israeli, such as cookbook author Adeena Sussman.

“Everyone I know misses traveling, so we thought how we can bring food experiences to people no matter where they are. It’s interactive and personal – you are not just watching a cooking class or demo. You are creating and experiencing,” Baum says.

“For example, the sommelier classes help you understand your palate. You can use wine from your own cellar or we will send you the same wine that the sommelier will have.”

As an extra cherry on top, some participating experts are donating their profits to charitable causes. 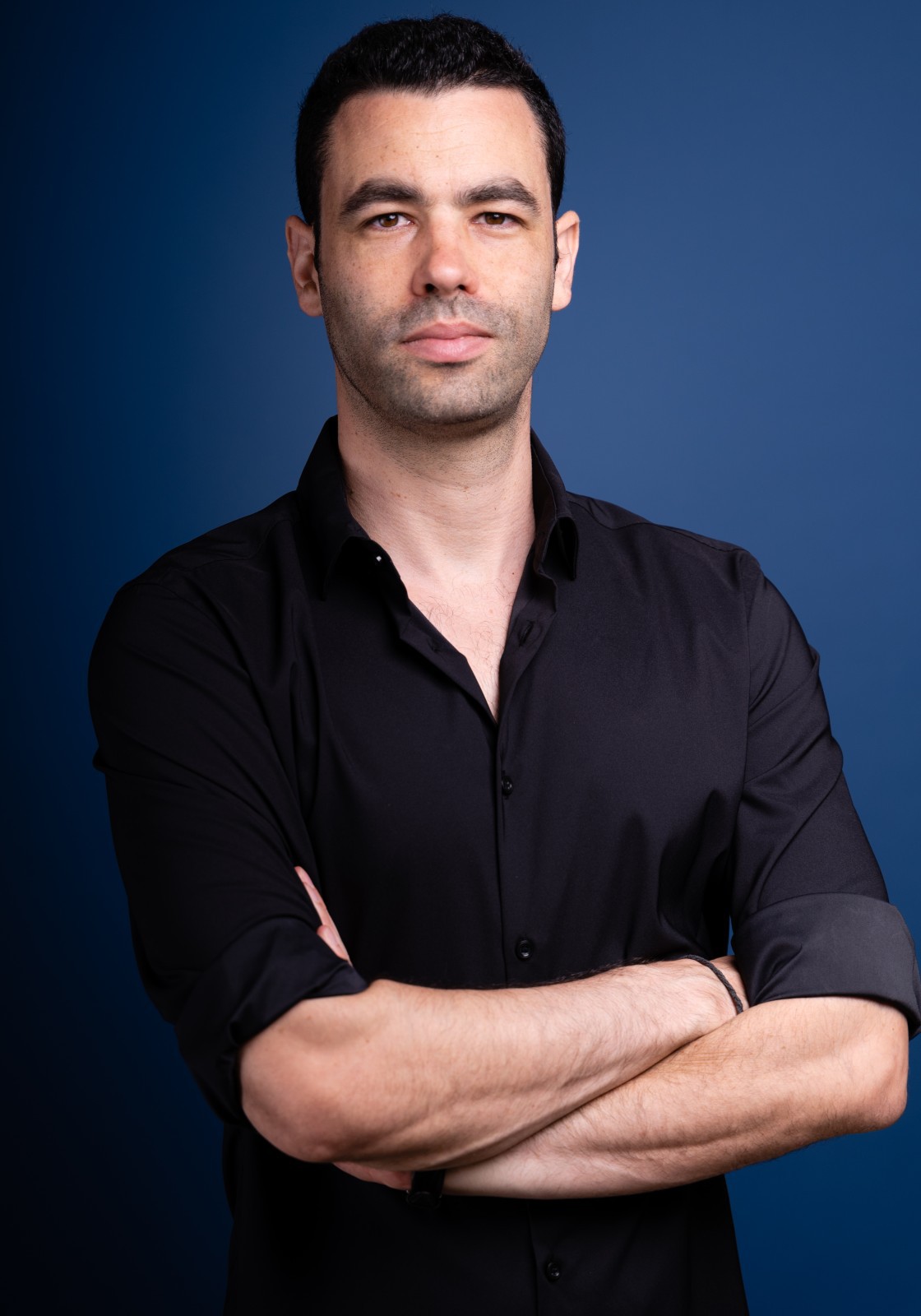 Tech industry veterans Guy Barel, Nir Dovrat and Knaan Braz found that their new business, an AI-based system for remote employee recruitment, turned out to be the right thing at the right time.

“We have been working on the product for almost two years. What started as a side project to answer our recruitment needs, became a company when we all quit our jobs and founded Canditech in February this year — just a few weeks before Covid-19 came and changed the world as we knew it,” CEO Barel tells ISRAEL21c.

By March, remote hiring was a necessity as in-person job interviews were no longer possible and prospective employees’ location no longer mattered.

“Unlike humans, AI is blind to gender, ethnicity, age and background. It can automatically grade unlimited candidates’ assessments and analyze endless amounts of information so companies can find better talents while reducing the time-to-hire by more than 50 percent,” Barel explains.

“Our bot analyzes various statistics to spot trends and patterns with your candidates. It reports their strengths and weaknesses alongside actionable items so you can focus your interviews and make better hiring decisions.”

Due to the pandemic, Barel says, “The number of applicants per position is higher than ever and the initial screening process is way more challenging and time-consuming than before,” making Canditech particularly relevant.

They adjusted the platform to the current situation. “One of the main features we added was a live-coding interview, using a shared editor and video chat, in order to help hiring managers quickly evaluate a candidate’s problem solving and communication skills.”

Barel believes remote hiring is here to stay. “After saving 70% of the time previously required for interviews, while providing an amazing candidates’ experience, we are confident they won’t go back.”

The artsy historic neighborhood of Ein Karem on the outskirts of Jerusalem normally is filled with Christian tourists. With international flights halted during the pandemic, many artisans in this quaint village closed their shops temporarily or permanently. 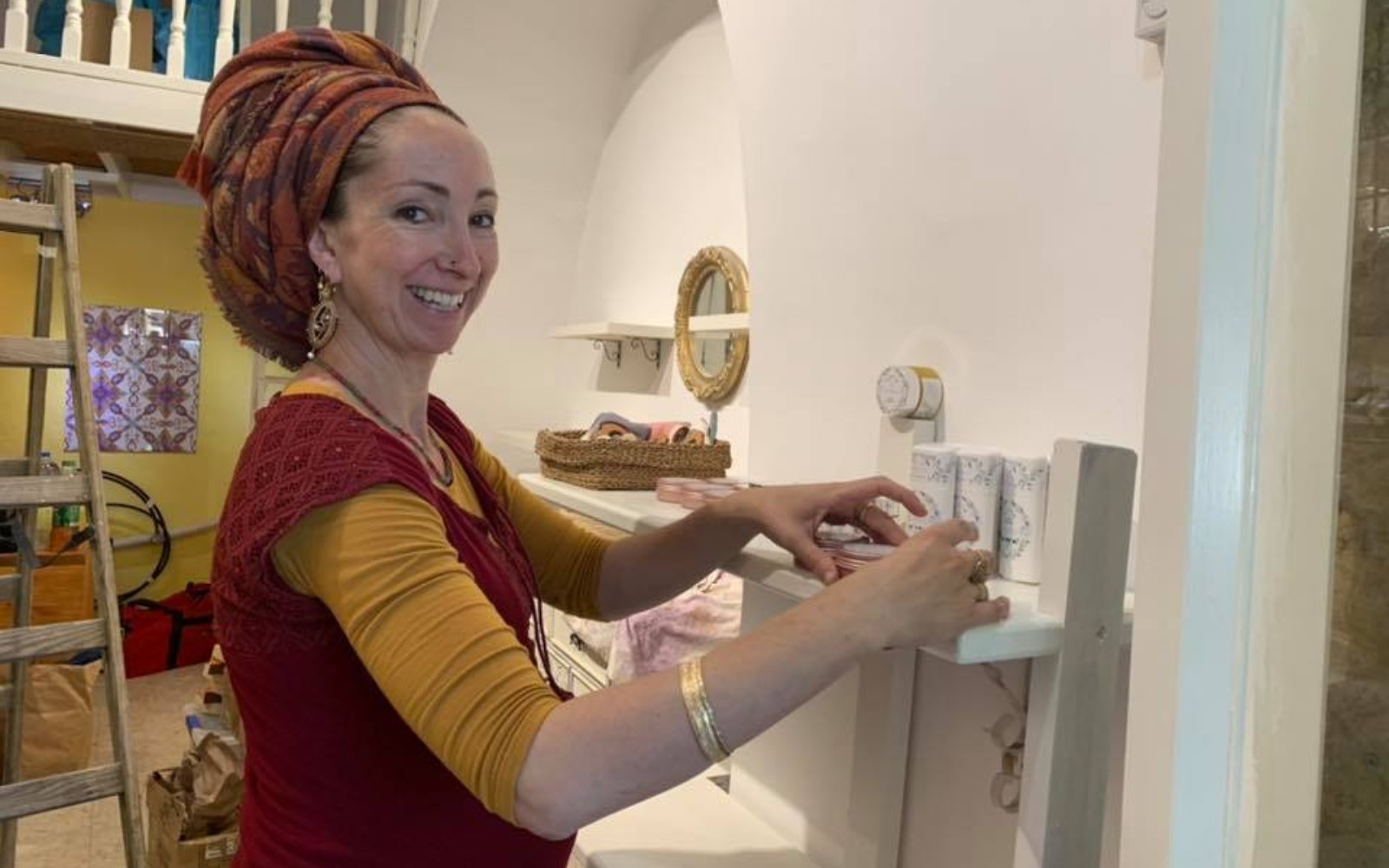 Why start a retail store with no foreign tourists around? Now that travel is limited, Israelis are rediscovering Ein Karem and locally made goods.

Silver and Hoffman had been selling their wares online and at craft fairs. In March, all fairs were canceled. Kad V’Chomer, the DIY pottery studio in Jerusalem that Silver manages, closed as well.

Silver had time on her hands and reasoned that many Israelis would be seeking beautiful seder plates for Passover, so she advertised hers and they sold better than ever.

“It made me feel like people are buying domestically, that this is a turning point of Israelis putting their money back into Israel and Israeli artists,” Silver tells ISRAEL21c. 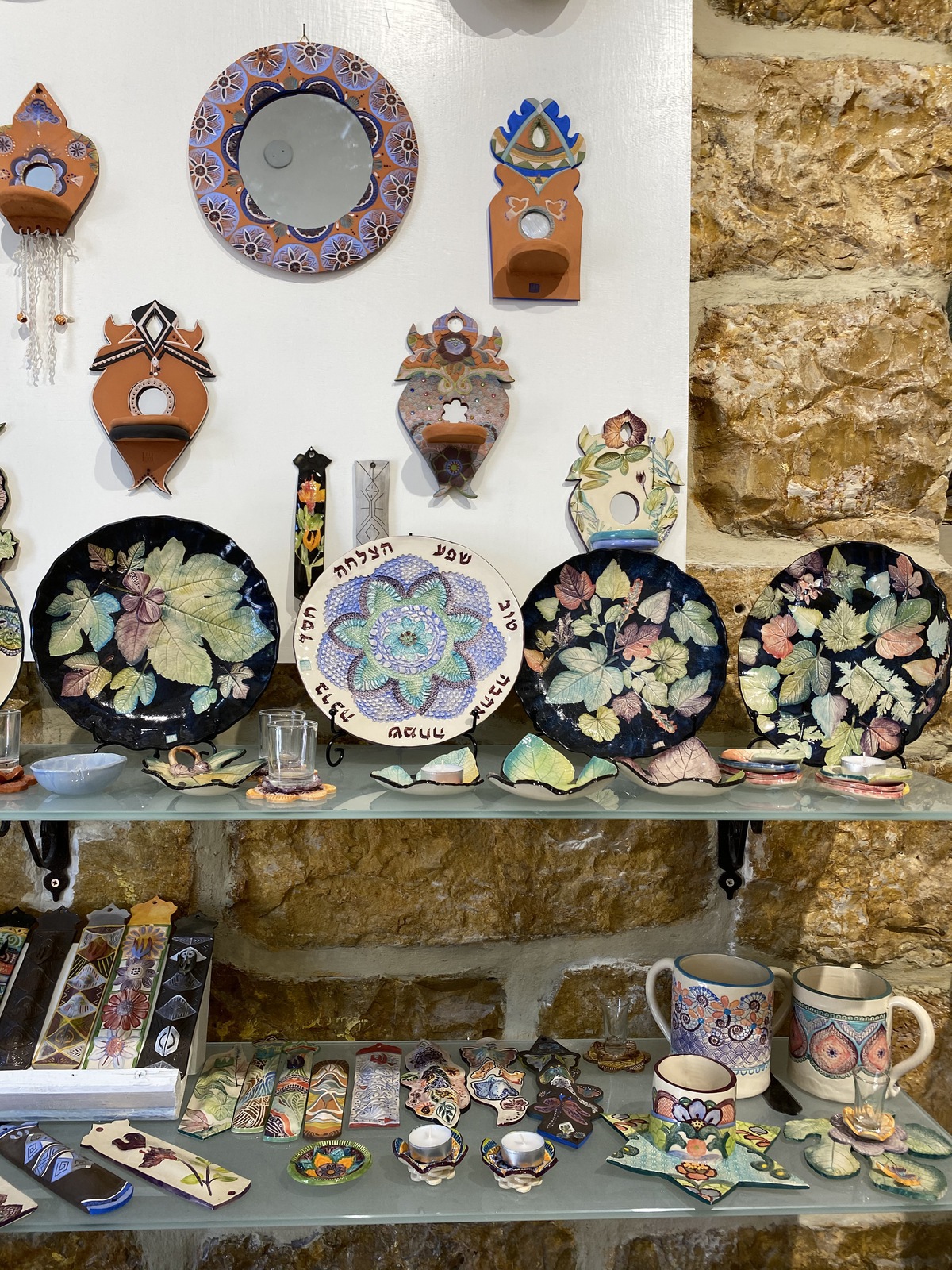 One stop on every Ein Karem visitor’s itinerary for the past 12 years has been the Sweet’n Karem chocolate and gelato shop just off the main street. Silver and Hoffman heard that the owner moved the shop into his nearby bed-and-breakfast complex, leaving this small but choice piece of commercial real estate empty.

Silver and Hoffman met with a financial adviser to understand how much they’d have to make in sales to cover their rent and make a profit. And then they took the plunge.

“At a difficult and even challenging time, we decided to jump into the water,” according to Hoffman. “While we were all in isolation, it was precisely then that a doorway opened. We felt we had to dare and fulfill a dream.”

Malchuta is Aramaic for “kingship.” The Hebrew form, malchut, also has a kabalistic association with the power of self-expression.

The shop carries colorful jewelry and ceramics made by its proprietors, as well as natural cosmetics, soaps and knitted dolls crafted by Ein Karem artisans.

And although it is closed on Shabbat (Saturday), which is rare in Ein Karem, Silver reports “it’s been a really good month. I felt there were angels helping us.”

The partners threw a socially distanced opening party on July 2. They wear masks inside the shop and follow all government directives.

“We don’t know what is going to happen with the corona, but we know that it brought a feeling that this is the time to buy from local artists. A lot of Israelis are traveling here instead of out of the country and they love our stuff,” says Silver. 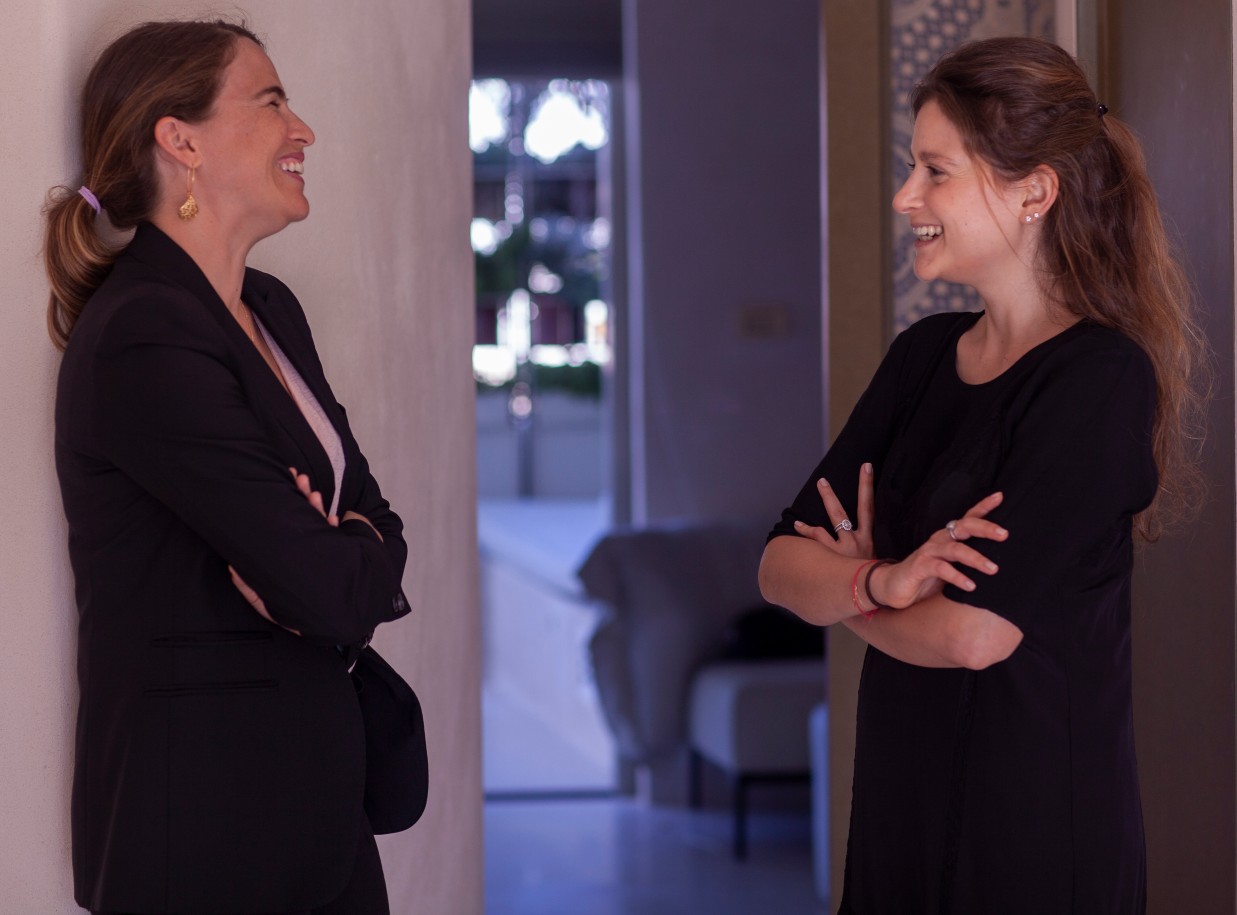 Kelly Roth, left, and Shanny Harel of The Nopo. Photo by Dan Bronfeld

Shanny Harel and Kelly Roth are accomplished Israeli businesswomen. Each wanted to start a venture of her own and enrolled in a Kellogg School of Management MBA program at Tel Aviv University.

After meeting there a year and a half ago, they decided to work together to develop The Nopo, (Nomad Popup) an online marketplace for handmade crafts — from Morocco, to begin with.

“I have always been interested in what gets people excited about a product. And I realized that the things I love most are things I bought on trips overseas that have a story behind them,” says Harel, pointing to a Mexican dreamcatcher hanging on her wall.

“We started with Morocco after researching shopping trends,” says Roth. “Morocco is associated with boho-chic, and personally we love Moroccan style.”

In addition, she says, Moroccan craftspeople are strictly regulated, ensuring a high quality of materials and workmanship. 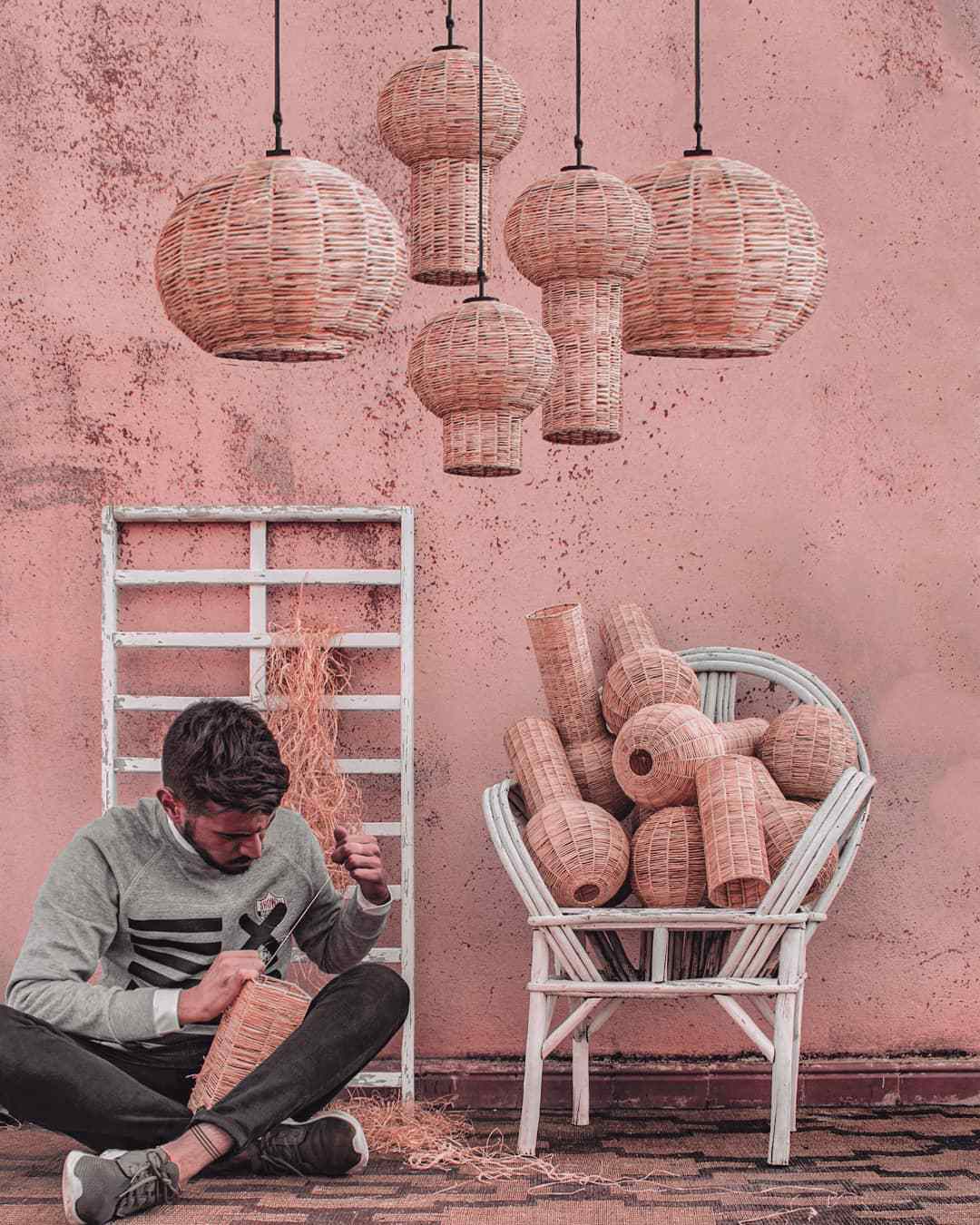 Items by Soufiane Aissouni, an interior designer in Marrakech, are available on The Nopo. Photo: courtesy

The Nopo’s birth happened to coincide with the pandemic. This may turn out to be an advantage because they’re selling objects people normally discover on their travels.

“We registered the company one week before Israel entered lockdown,” says Harel. “We were planning on going to Morocco and meeting artisans and explaining our concept. All of a sudden, we couldn’t go. For two weeks, we weren’t sure if we should wait but then we decided it’s more relevant now than ever, for both the artisans and the consumers.”

They found and connected with artisans through social media and Zoom meetings. On April 1, they launched the website.

The partners say Morocco is a test case. If they successfully overcome the language and cultural barriers and the problematic delivery and payments infrastructure in Morocco, they will feel confident about approaching craftspeople from other countries.

Someday they hope to meet their Moroccan artisans – many of them Muslims. “We didn’t know how they would feel about working with Jewish Israelis,” says Harel. “We were so happy that all of them were saying they’ve heard amazing things about Tel Aviv and want to come visit someday.” 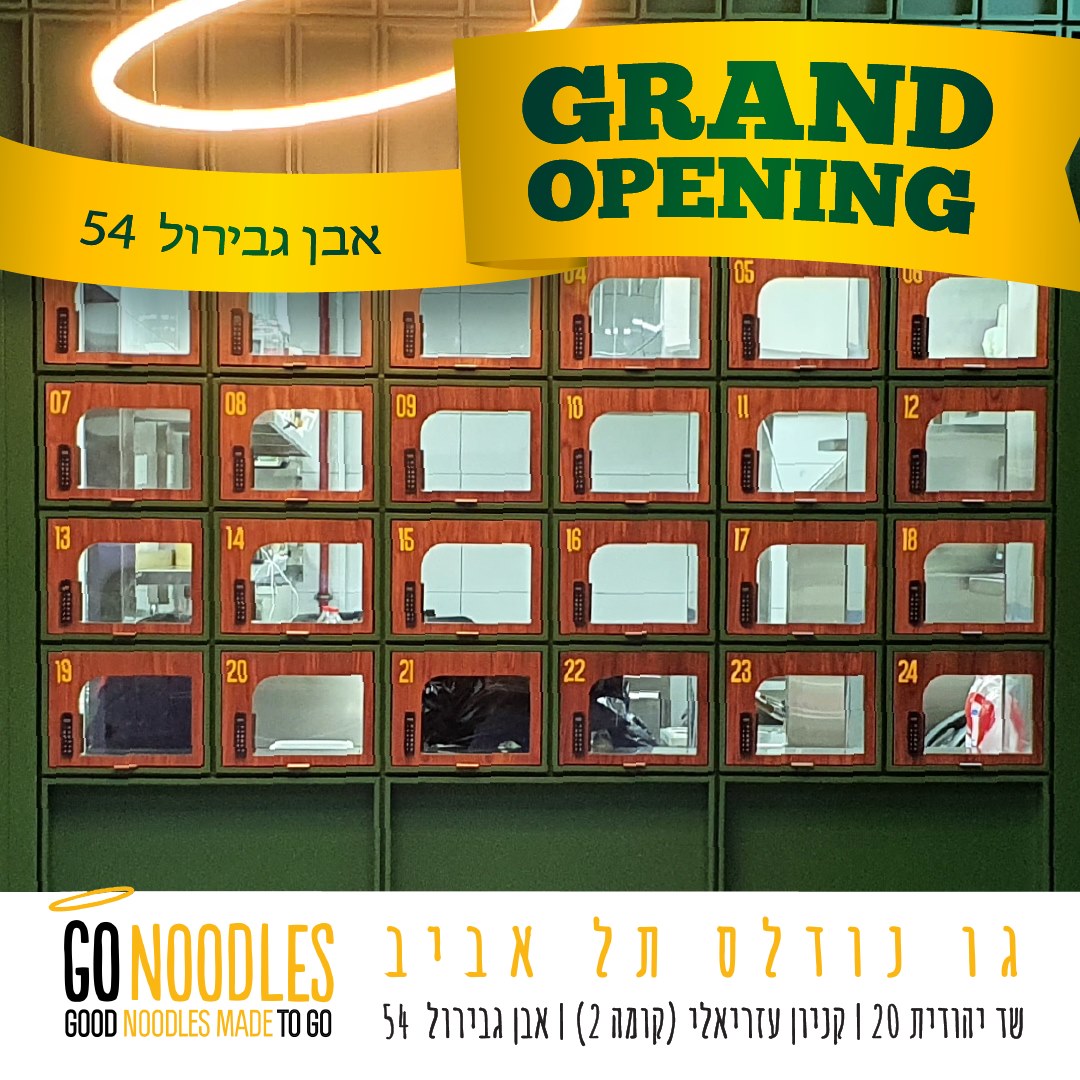 Tel Aviv Asian noodle chain Go Noodles has been around since 2004, but its third and newest branch features a contact-free system for ordering and picking up meals.

Customers order and pay via an app or touch-screen monitors at the branch (which can be wiped down between uses).

When their noodle meal is ready for pickup, the chefs put it into a numbered clear compartment, like a post-office box, in the wall between the kitchen and the storefront. The customer gets a text message with a code to open the box.

It’s like an old-time automat, only without tables and chairs.

Shmulik Gal, who took over the chain in 2014, said he came up with this novel takeout concept a year ago to keep overhead costs low. The timing of its implementation in July turned out to be serendipitous, as the pandemic has closed or severely curtailed restaurant activity.

“People are looking for less contact with others, less intermingling, less touching,” Gal told Ynet. “I think this thing has a lot of strength and people will embrace it.”

You might think opening a new ice cream shop is not a wise move during a pandemic when people aren’t venturing out as much — and wearing masks when they do.

But the childhood friends who opened Pinoli Gelato in Tel Aviv’s Dizengoff Square in early May were banking on the fact that Israelis have it bad for ice cream. 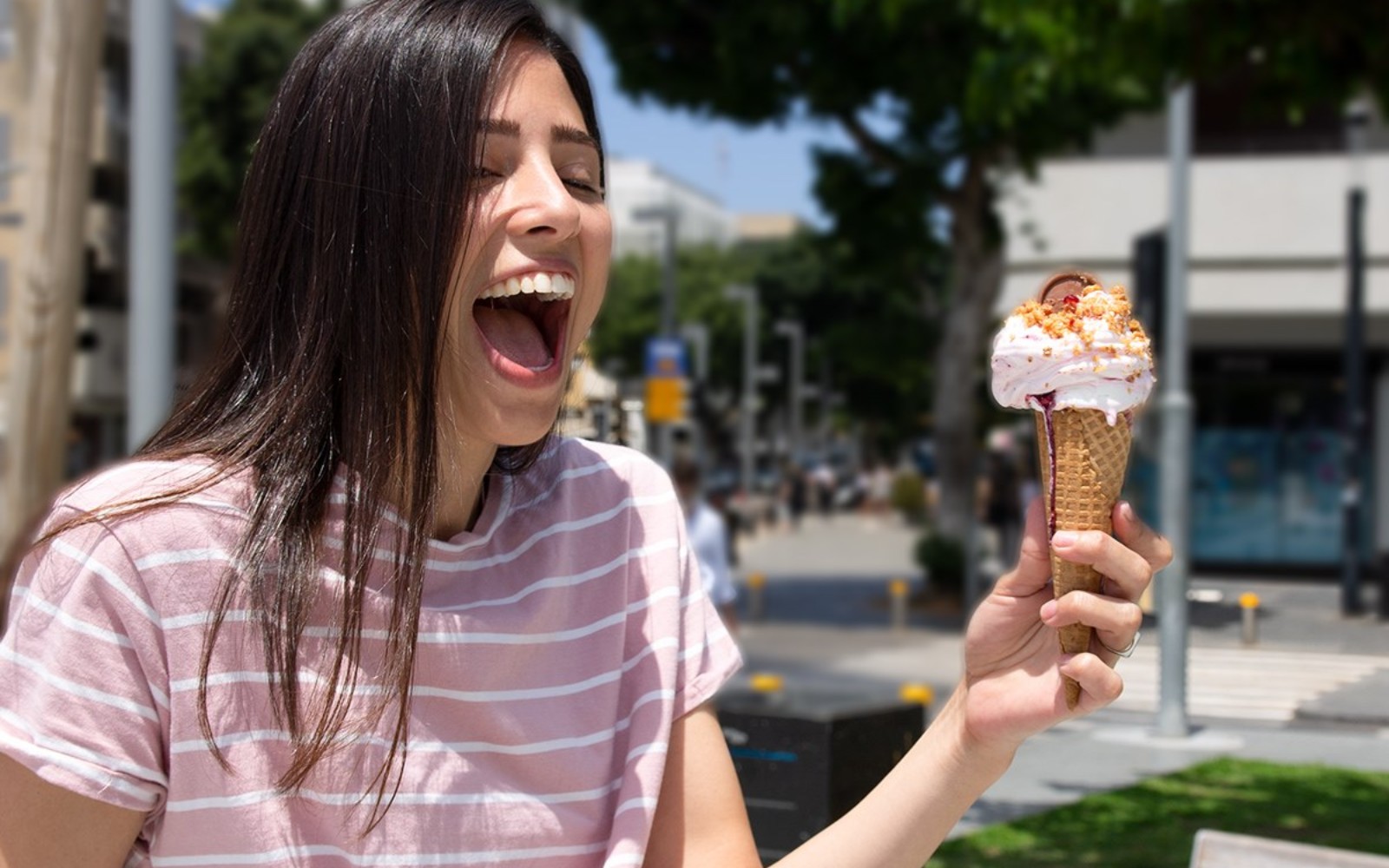 The proprietors, Golan Dahan and Yoash Amar, are former paratroopers who pooled their resources to build the shop before Covid-19 hit, and decided to continue with their plans despite the risks.

Among their early customers was Tel Aviv Mayor Ron Hudai, who raved about the pine-nut flavor in a Facebook post (pinoli is Italian for pine nut).