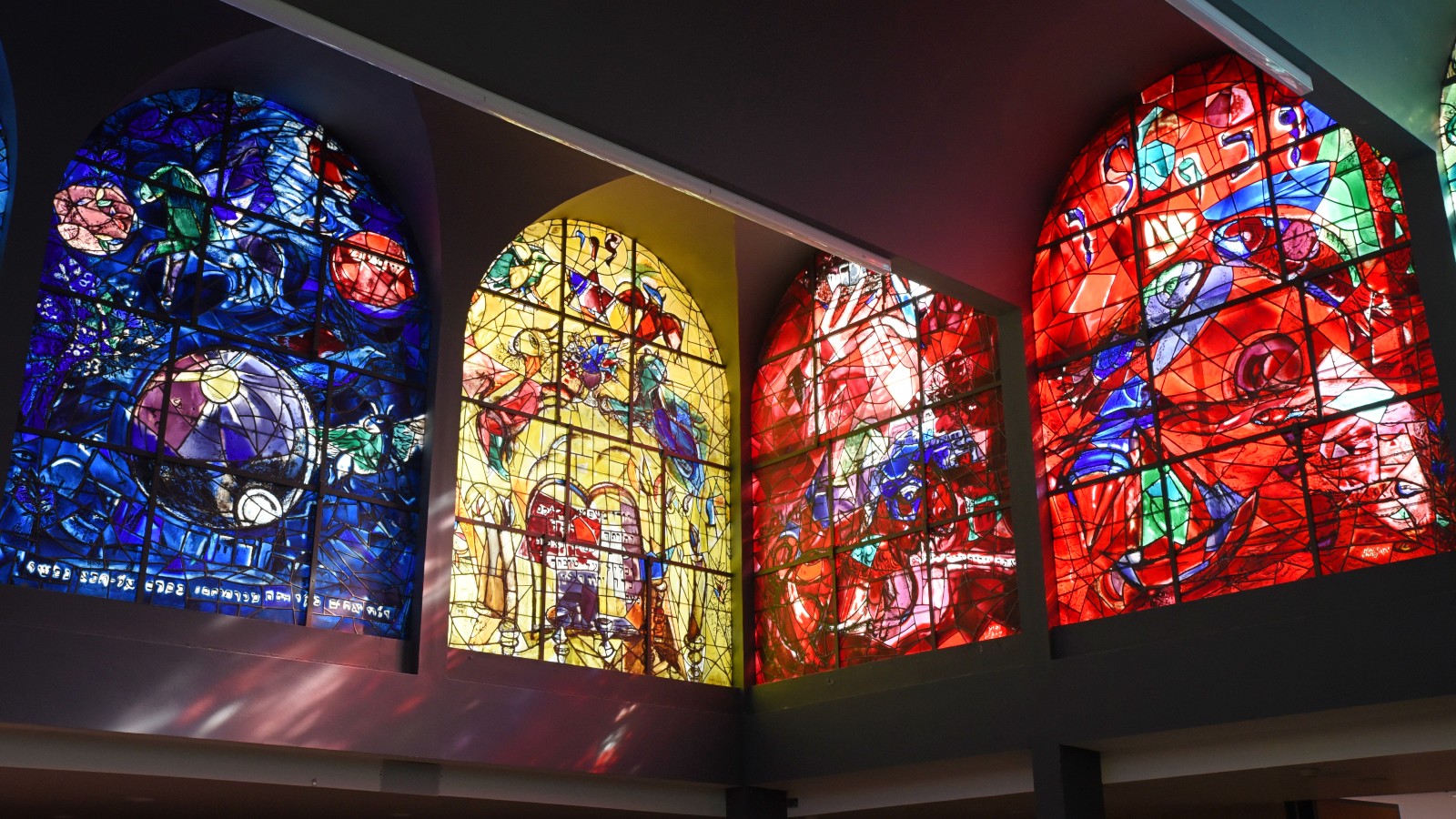 Each of the 12 stained-glass panels that Chagall donated to Hadassah Medical Center is filled with a dance of intricate images and stunning colors.

When Marc Chagall debuted a series of biblically inspired stained-glass windows at the Louvre in Paris and then at the Museum of Modern Art in Manhattan in 1961, these shows were only stopovers before the windows reached their permanent home on the campus of Hadassah’s new medical center in Jerusalem.

The Chagall Windows captured public imagination across the world. John F. Kennedy, then president of the United States, called them “extraordinary.”

“The inspiration of an ancient and noble history and the inspiration of modern artistic genius are combined in these windows,” Kennedy wrote to Miriam Freund, then National President of the Hadassah Women’s Zionist Organization of America. 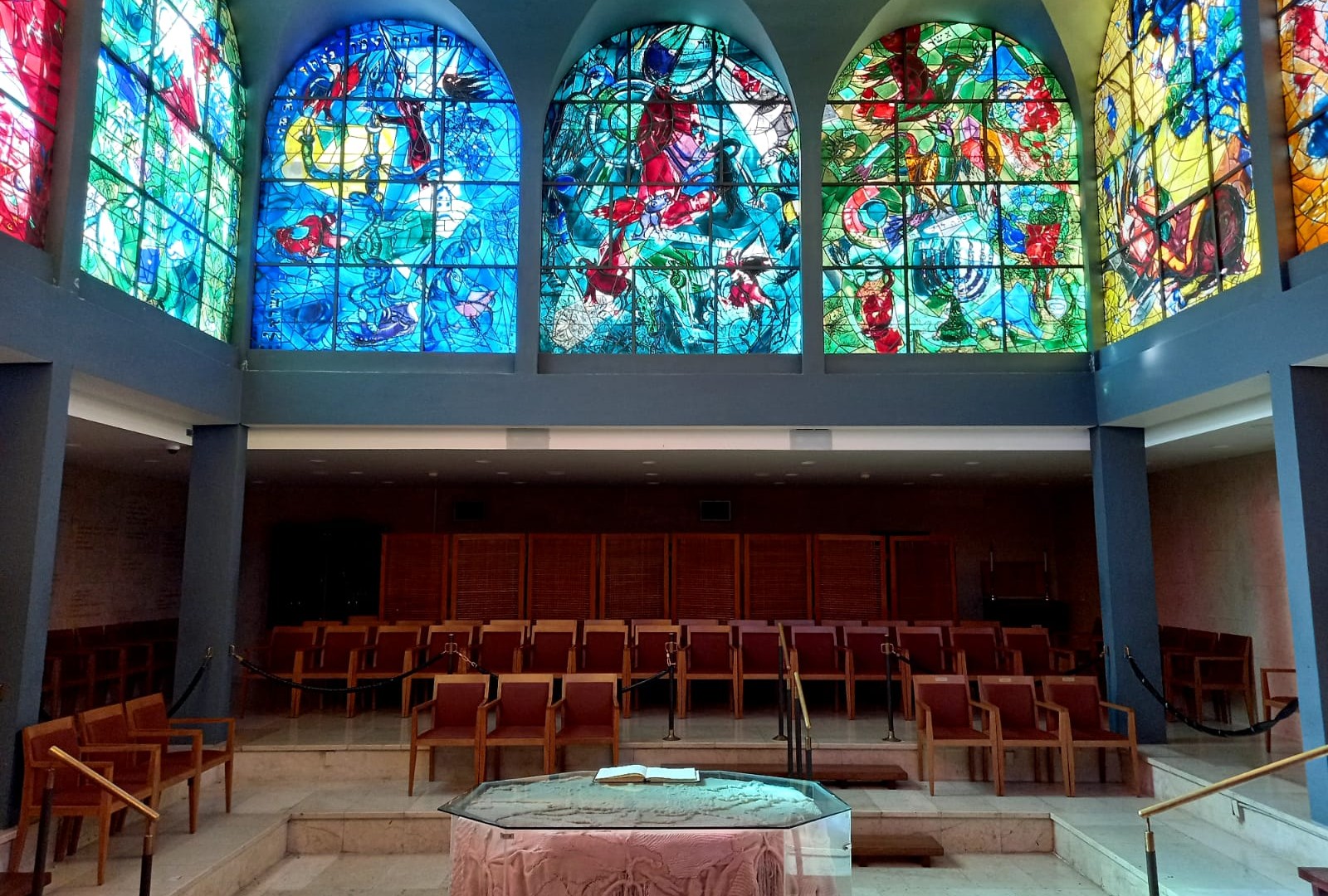 Chagall Windows depicting the tribes of Zebulon to Joseph above the bima in the Abbell Synagogue. Photo by Ariella Green/all rights reserved to Hadassah

“The importance of this cultural event is deepened for us by our knowledge that the windows are destined for the Hadassah-Hebrew University Medical Center,” Kennedy wrote, “and that by their beauty they will serve and encourage the scientific and humanitarian work done there.”

Dedicated in Jerusalem on February 6, 1962, as part of Hadassah’s golden anniversary celebration, the windows have now been in place for 60 years.

“This is my modest gift to the Jewish people who have always dreamt of biblical love, friendship and peace among all peoples,” Chagall noted that day.

‘What took you so long?’

The windows came about when Hadassah representatives met with Chagall in Paris in the late 1950s. They came well prepared with a compelling request for stained glass for what is now called the Abbell Synagogue.

The renowned painter reportedly cut short the women mid-sentence. “What took you so long? I’ve been waiting my whole life to serve the Jewish people,” he replied.

Or so the legend goes. In the decades since, the window’s origin story may have taken on some air of myth.

“We don’t know if it was said exactly that way, but it sounds good,” says Barbara Goldstein, Hadassah Deputy Executive Director and Ambassador at Large in Israel. Now 80, she has held various Hadassah leadership positions and is widely considered the “holder” of this history. 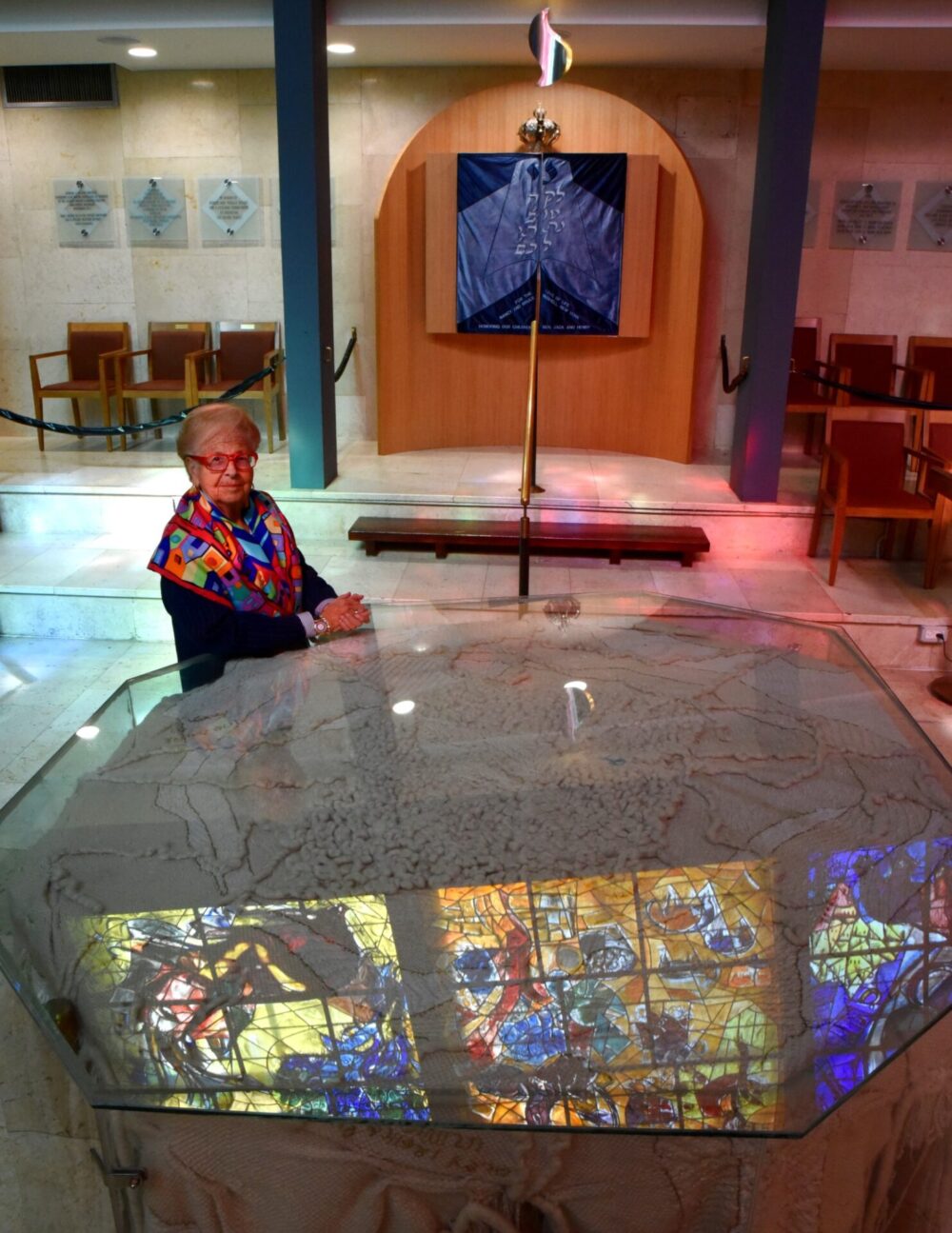 Hadassah Deputy Executive Director Barbara Goldstein in the Abbell Synagogue; a reflection of Chagall Windows is seen on the bima. Photo by David Harris/all rights reserved to Hadassah

Whether the quote is fact or fiction, what is indisputable is that Chagall constructed a supersized series of windows. What’s more, he donated them as a gift.

“They were looking for one or two windows,” Goldstein says. “They never expected 12. That was all Chagall.”

The synagogue was still in the planning stages in 1958.

“Chagall wanted complete control,” Goldstein says, and therefore the synagogue “was built for those windows.”

Each of the 11-by-8-foot arched artworks depicts themes relating to the biblical 12 sons of Jacob, progenitors of the 12 Tribes of Israel. Each image reflects Chagall’s immersed study of Genesis 49 and Deuteronomy 33. 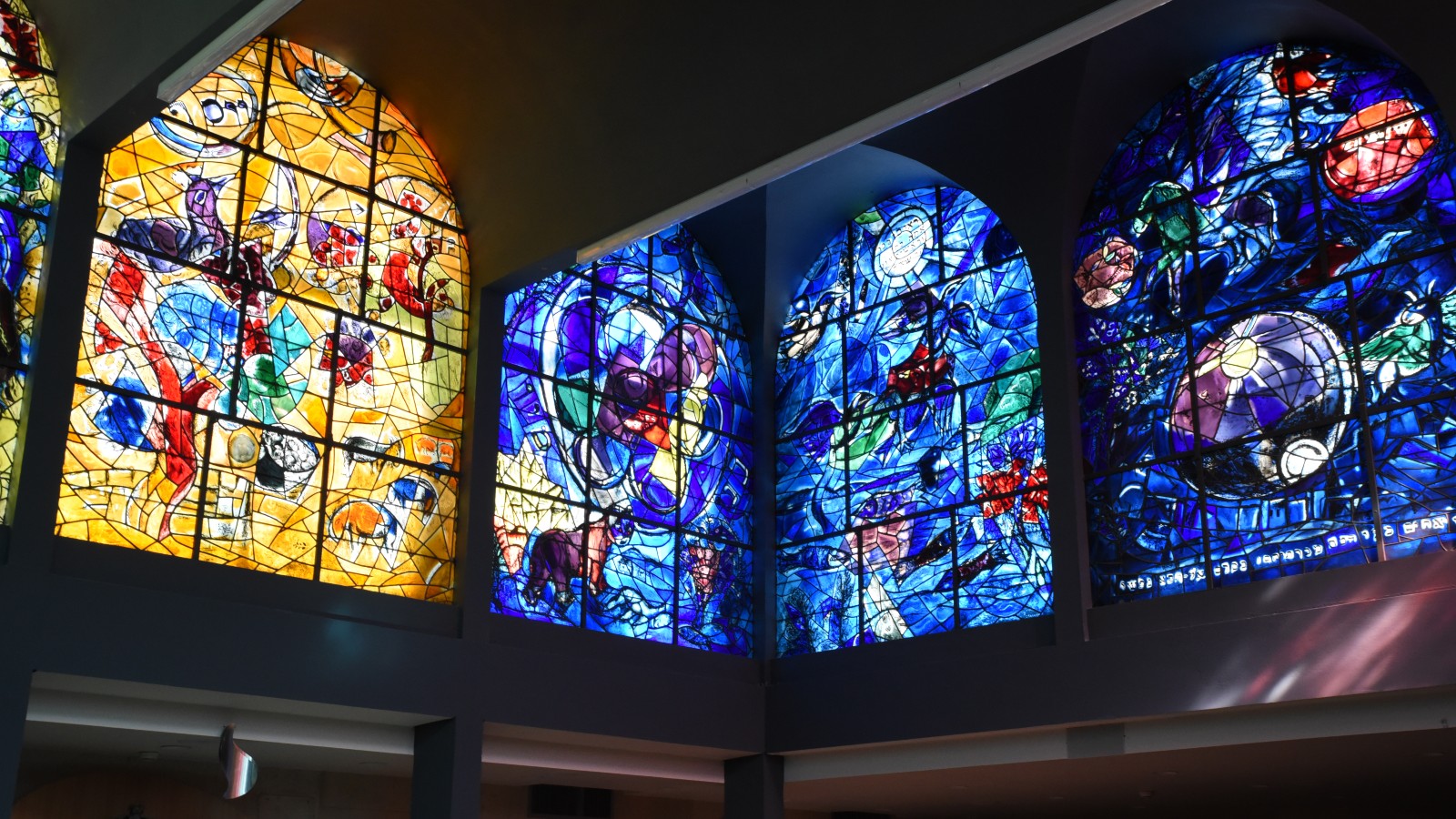 The windows feature brilliant reds, blues, yellows and greens and a visual vocabulary expressing the biblical text and Jewish history, Chagall’s world both real and perceived, his love and profound identification with the history and culture of Jewish people and his early life in the Russian shtetl of Vitebsk.

“All the time I was working, I felt my mother and father looking over my shoulder; and behind them were Jews, millions of other vanished Jews, of yesterday and a thousand years ago,” said Chagall, who was born Moishe Zakharovich Shagal in 1887 and passed away in 1985. 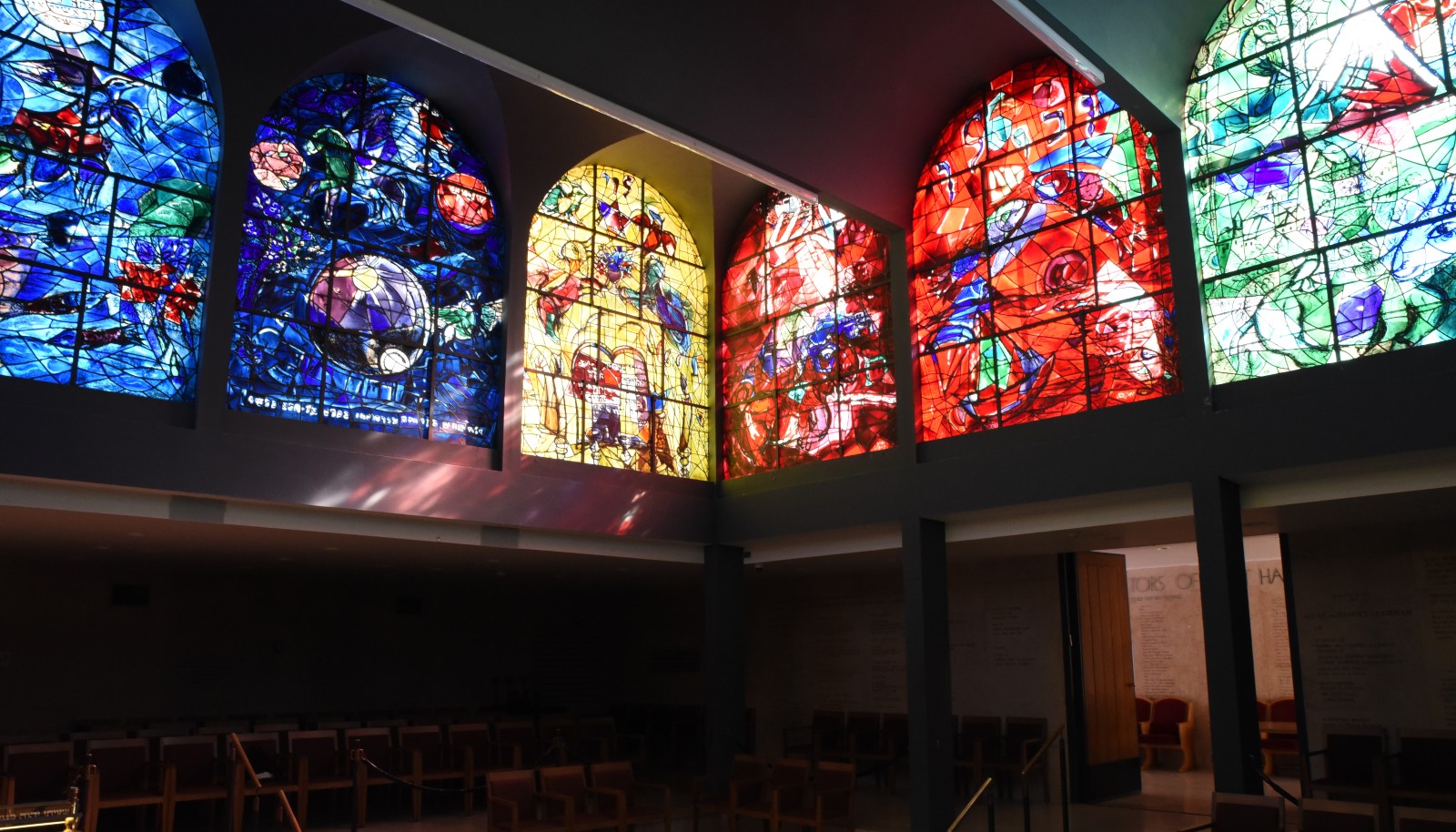 Chagall said that the windows “completely transformed my vision; they gave me a great shock, they made me reflect. I don’t know how I shall paint from now on, but I believe something is taking place.”

While approachable from the exterior of the building, the elaborate beauty of the windows is most dramatic viewed from within the sanctuary, especially when illuminated by the sun.

The story of the Jewish people

Architect Joseph Neufeld (1899-1980), who designed several other prominent synagogues in Jerusalem, gave the sanctuary its clean, mid-century minimalist lines. It nevertheless evokes a medieval house of prayer with a contemporary twist.

Four walls form a square around the main dais or bima, where the Torah is read. On the wall above the ark, the windows progress from Naphtali on the left to Joseph and Benjamin on the right.

On the adjacent right wall are Reuben, Simeon and Levi. On the back wall, Judah, Zebulon and Issachar follow. The left wall features Dan, Gad and Asher.

Each panel is filled with a dance of intricate images, compelling themes and stunning colors. Like a coral reef of magnificent diversity, the longer one observes them, the more one sees. 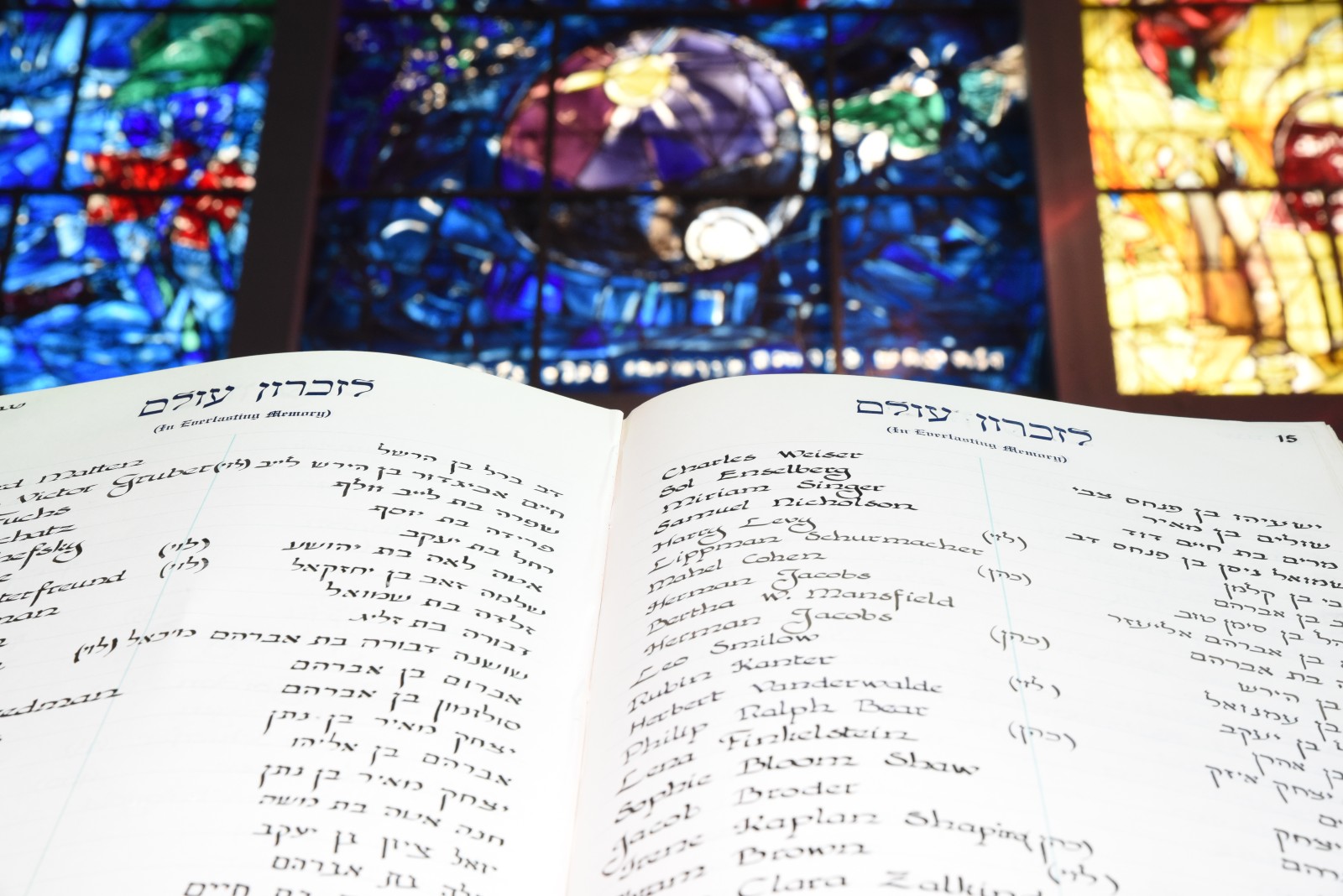 The Yahrzeit Book in Abbell Synagogue at Hadassah-Ein Kerem reflects light from the Chagall Windows. Photo by David Harris/all rights reserved to Hadassah

While developing the concept in 1959, Chagall employed extensive maquettes and final color sketches that began in pen and ink, collage and gouache. He teamed with a married pair of stained-glass artists, Charles Marq and Brigitte Simon-Marq, with whom he later collaborated on the cathedral at Metz.

Chagall developed five studies through early 1960. After the final study, Charles Marq experimented for many months more to obtain the correct hues, values and thicknesses at the glassworks of Saint-Just-sur-Loire. The team ultimately sent trial panels to Jerusalem for light correction.

Artisans blew and rolled the final glass panels in the Loire Valley. Chagall painted, etched and scratched panes of about 50 colors at the Atelier Simon in Reims, France. He employed a “free, water-soluble medium,” intensifying color, creating new patterns and adding designs before they were fired again.

“Glass is a transparent wall between my heart and the heart of the world,” Chagall said. 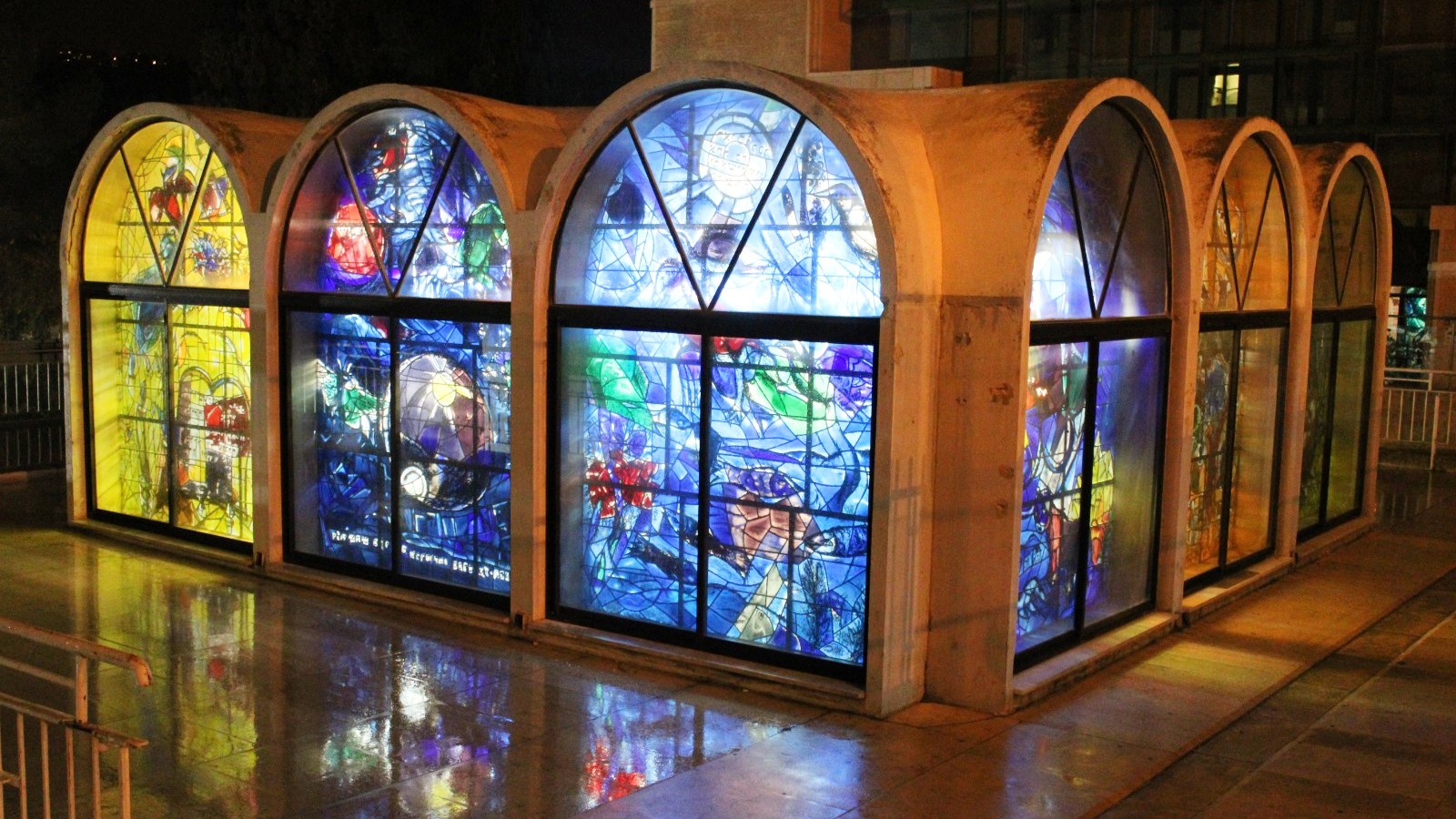 Exterior view of the Chagall Windows (Naftali to Levi) in the Abbell Synagogue at Hadassah-Ein Kerem. Photo by Nitzan Zohar/all rights reserved to Hadassah

Notably, Chagall remained engaged throughout production. That fact stands in contrast with the practices of Henri Matisse, whose windows adorn the Cote D’Azur’s Chapelle du Rosaire de Vence, and Fernand Léger, whose windows are set in concrete at Sacré-Cœur, a church in Audincourt, France, which were both completed in 1951.

In fact, when the Chagall Windows were damaged during the Six Day War, the hospital informed the artist of the loss via telegram.

Chagall’s response? “You worry about the hospital,” recounts Goldstein, who was in Jerusalem on a sabbatical year with her husband at the time. “I’ll worry about the windows.” 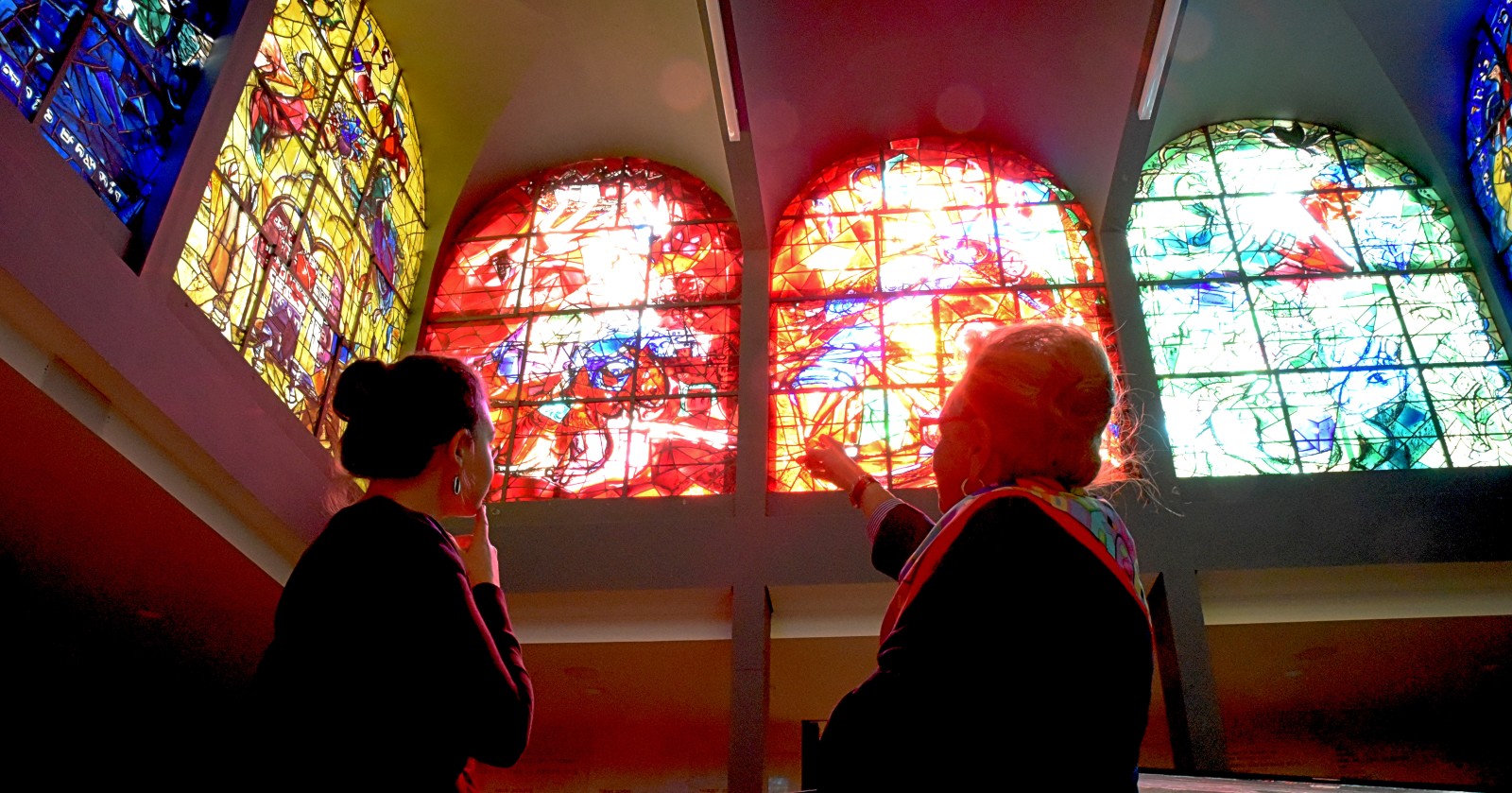 According to biblical precepts, no “graven images,” such as complete human figures or likenesses, are realistically represented.

A green bird’s head caps a largely orange and red urn. A blue goat smiles in a cubist depiction. Multicolored lions represent kingship. Hebrew lettering flows from one section to another. Chagall’s signature is evident in Latin letters.

In a MOMA press release in 1961, the endeavor is described as composed on a “heroic scale” in what “may be the finest in the revival of stained glass that has occurred in France since World War II.” 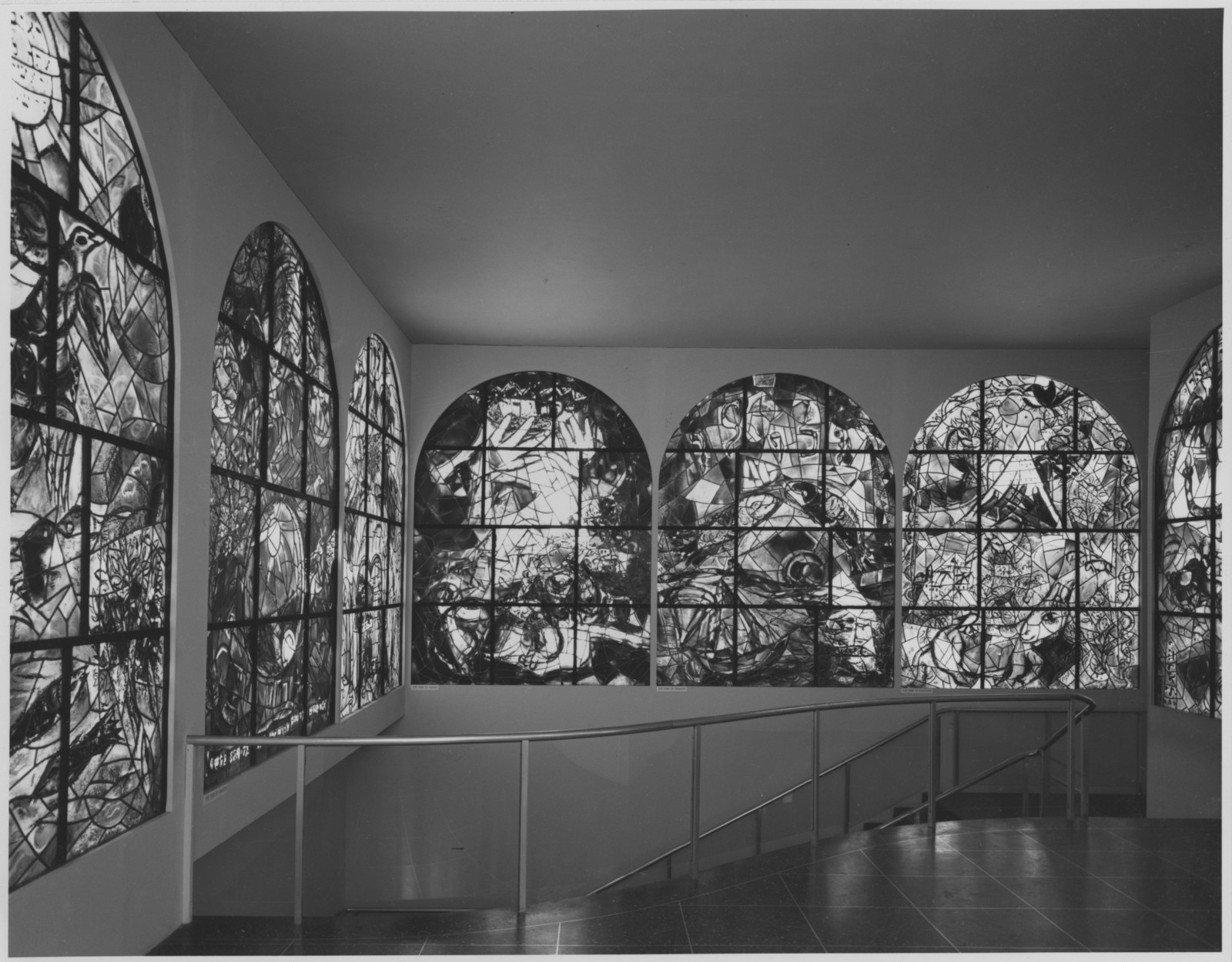 The Chagall Windows on display in 1961 at the Metropolitan Museum of Art. Photo by George Barrows/MOMA Archives, New York

The windows remind Goldstein, who maintains an office on the Ein Kerem campus, that “this hospital has one of the greatest art treasures in the world. There are women who come before they give birth and after they give birth to sit and pray,” Goldstein says. “I am also moved every time I come in.”

One synagogue wall lists the names of donors who contributed $1 million per window.

“They got a good deal,” Goldstein says. “They can’t take the window home, but they can say they have a Marc Chagall.”

Guided tours of the Chagall Windows (and the Hadassah-Herzstein Heritage Center, which depicts the history of the organization and its founder, Henrietta Szold) are available for groups and individuals from Sunday through Thursday, 8:30am to 4pm; however, hours are subject to change during the pandemic. Call +972-2-677-6271 for updates.