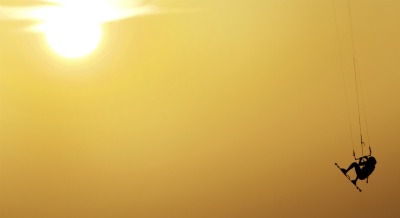 Photo by Tsafrir Abayov/Flash90
Efficient tracking of the sun’s rays, thanks to kite surfing. A kite surfer on Ashkelon beach.

A kite surfing engineer from Israel has found a way to turn his passion for the sea into more power from the sun. Eyal Dror’s company Eternegy has developed a new kind of solar panel tracker, the Etracker, to help solar photovoltaic (PV) power plants soak in more energy from the sun.

PV solar panels that are fixed to the ground collect the most amount of energy when the sun hits them at a 90-degree angle. This usually happens at high noon, only once a day. Trackers that can move on one or two axes according to the angle of sun help optimize collecting the sun’s rays, but they tend to be expensive.

Dror’s new invention, inspired by a “eureka” moment when kite surfing, aims to collect 40 percent more power from the sun on a daily basis, with an investment that costs about the same as a fixed panel installation. Choosing fixed or dual-axis tracking has turned into a no-brainer.

Simon Fried, manager of marketing and business development at Eternegy, tells ISRAEL21c that the science behind the engineering is what makes this new invention so effective, efficient and affordable.

Instead of heavy metal parts and machinery, the company’s design uses cables, like in kite surfs, to pull and position the panels and to offer support to the whole structure at the same time. The entire unit is lighter, and therefore less energy is needed for transport and setup.

Energy is all about timing

Based on a four-legged “quadpod,” solar panels sit atop a plate holding the PV panels, which can be swiveled both horizontally and vertically to catch the sun’s rays at an optimal angle all day. 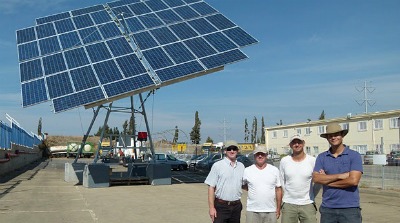 Algorithms built into Israeli-made software “speak” with the trackers, making sure the tension is best for support and positioning depending on the sun and the weather.

The tracker moves with the help of a winch constantly keeping the side cables under tension. “Not just locked in place to make sure the platform doesn’t jiggle – but pulled slightly the whole time. That’s what makes the structure strong,” says Fried.

Ideally, trackers can collect solar power when grid prices are maximal, like in mornings and afternoons.

“But this is the problem with the wind and sun: These energy sources are available at the time of day when the wind blows or the sun shines. That’s not the same time that the grid needs the electricity to be produced,” says Fried. “Like in California, they get a lot of wind turbines that blow at night. Some of this energy gets wasted.”

Etracker solves that problem, he continues.

“We get more energy and can get it more often at the right time. This is a plus. In California and other places selling into the grid, you’d get more money for energy produced at 9 or 10 a.m. than if you sell at 12 or 1 in the afternoon.”

The solution can come with a big payoff. “In our system you might get 40 percent more energy, and 50% or 60% more money for it,” estimates Fried.

Another bonus: Solar trackers smooth out the supply of energy so that a surge doesn’t only come at high noon. “You get more and you get it at the right time.”

The company has an R&D agreement in place with the University of Arizona, and with entities in India and China. To date, $700,000 has been invested in the company, with a staff of eight based in the Negev Desert. Its managers seek $2 million to $4 million more for commercializing the technology.

Solar panels sit on a “quadpod” for maximum rotation.

The company estimates a 25-30% better return on investment using Etracker.

Investors took notice of the company’s innovation at the biannual WATEC Israeli clean-tech conference recently held in Tel Aviv. “Lots of interesting contacts were initiated and we had several promising meetings,” says Fried.

Telling the story behind the invention so often has Fried, the father or four young children, inclined to try kite surfing himself despite being very busy on the home front. The sport is popular in Israel along the Mediterranean Sea and in Eilat at the Red Sea:

“We’ve already got one-and-half kite-surfers in our company. Now I am feeling a bit guilty that I am not. I’ve got to go a couple of times to connect to the other side of the idea,” he confides.

UNCOVER ISRAEL - Get the ISRAEL21c
Weekly Edition free by email
Sign Up Now!
Bring Israel's story to life.
Millions of people around the world rely on us to gain a deeper understanding of Israel. We are the trusted source for original content you won't find anywhere else.
You can make a difference. Donate today to support journalism that brings Israel’s story alive.
SUPPORT ISRAEL21c
Read more on:   Energy, Environment