Could Europe look to the eastern Mediterranean region, and specifically Israel, for its natural gas needs as an alternative to buying from Russia?

While the media are reporting a renewed interest in eastern Mediterranean gas, experts interviewed by ISRAEL21c were more cautious about its prospects.

The Eastern Mediterranean (EastMed) Pipeline Project was supposed to transport gas to Europe from Israel and Cyprus via Greece and Italy using an 1,180-mile undersea pipeline with a capacity of 10 billion cubic meters (BCM) per year.

“The importance of this project was very much geostrategic because it brought Israel, Greece and Cyprus much closer,” said Michael Harari, a policy fellow at Mitvim: The Israeli Institute for Regional Foreign Policies and former Israeli ambassador to Cyprus.

Until the Russian invasion of Ukraine, the EastMed pipeline appeared to be dead in the water. The United States said in January that it no longer supported the $6.54 billion initiative announced in 2016, citing environmental concerns.

“I think among the reasons for the American administration to put aside the EastMed pipeline was to stabilize the region by taking into consideration the Turkish angle,” Harari remarked. 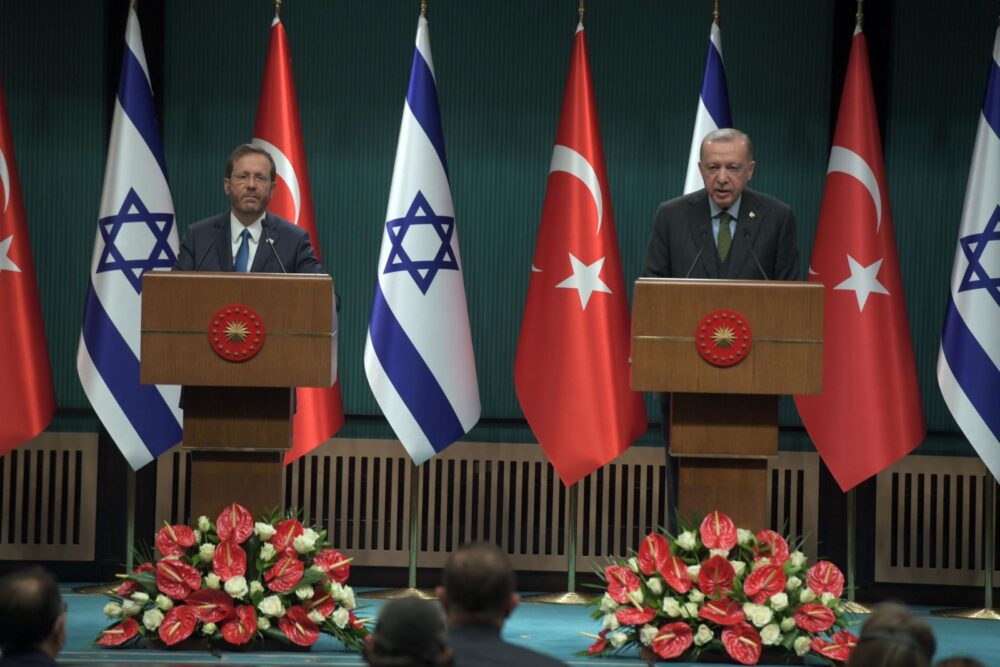 “Turkey now says very clearly — [President Recep Tayyip] Erdoğan said it next to Herzog in Ankara — that it wants to get gas from Israel for its own consumption and into Europe.”

Israeli officials say that the subsea pipeline from the Leviathan gas field to Turkey could run up to around 343 miles at a cost of some $1.5 billion.

However, an Israel-Turkey subsea pipeline could cross Cyprus’ Exclusive Economic Zone, creating potential roadblocks for a country with historically adversarial relations with Turkey.

Israel wants to maintain close ties with Cyprus, which along with Greece and Egypt, leads the East Mediterranean Gas Forum (EMGF).

Harari told ISRAEL21c that although the attractiveness of eastern Mediterranean gas is “clear and valid, the volumes are not enough to cover major parts of Europe’s needs and it is not going to happen in the next year or two.”

Russian natural gas last year represented around 45 percent of European Union (EU) gas imports at 155 BCM and close to 40% of the EU’s total gas consumption, according to the International Energy Agency.

The bloc was already committed to transitioning away from fossil fuels to meet its climate targets under the 2015 Paris accord — natural gas consumption in the EU is projected to drop to 22% by 2030 and just 9% by 2050 before eventually stopping entirely.

“Under the light of the EU energy policy, the future of the EastMed project is still open but uncertain, and worst without a strategy for the pipeline’s development in line with the EU’s long-term climate objectives,” Martina Pilloni, associate expert on energy policy at the Israel Public Policy Institute, told ISRAEL21c.

Russian President Vladimir Putin’s military assault on Ukraine, launched February 24, may have opened the door to Israeli gas. On March 8, the EU presented its REPowerEU plan, which calls for “diversifying gas supplies via higher LNG imports and pipeline imports from non-Russian suppliers.”

But Pilloni was quick to point out that the plan also calls for more biomethane and hydrogen and emphasizes an even faster reduction in fossil fuel dependence.

Still, a government guarantee from the EU for non-Russian natural gas could be enticing for private investors otherwise making a risky gamble in terms of locking into a contract, building a pipeline and getting gas out of the well.

“Private investors need to see whether the EU is willing to put the money — government money, not just private money — into these endeavors,” said Elai Rettig, a specialist in energy geopolitics and security who is an assistant professor of political studies at Bar-Ilan University.

“Whatever they put the money on, that is what is going to be built,” he added.

While the EastMed pipeline or a route via Turkey both pose significant challenges, liquefied natural gas (LNG) for shipment and storage is another desirable option, experts indicate, with an eye on Egypt’s two existing LNG facilities or a proposed floating LNG facility at Leviathan.

While Europe decides on its energy policies to reduce Russian dependence, Israel continues to benefit from gas exploration in its economic waters.

The Leviathan and Tamar gas fields operated by Chevron are already online. Last month, oil and gas exploration and production company Energean announced that its Karish gas field was connected to Israel’s gas network with the gas expected to start flowing to consumers later in 2022.

“We are kind of immune to these ups and downs in the global gas market that we are seeing in Europe and in Asia,” Rettig said.

“Because we have our own domestic supply, and we have an artificial competition going on between these three fields.”