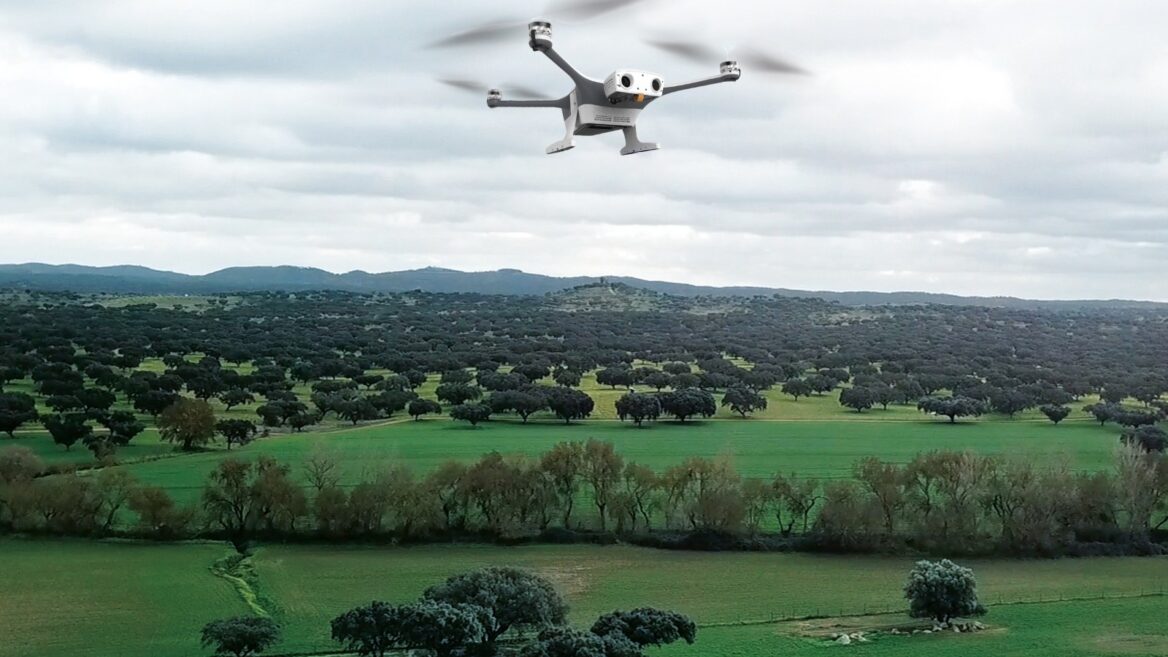 Now, Percepto’s drones have been certified by Florida International University’s “Wall of Wind” – a wind tunnel simulation facility that subjected the unmanned aerial vehicles (UAVs) to gusts up to 150 miles per hour.

The goal is to ensure the Sparrow UAVs are fit to fly in the immediate aftermath of a hurricane to assess damage on the ground.

Autonomous drones have a clear advantage over manned drones in emergency situations: There’s no need for a pilot to be present at a dangerous site. Self-flying drones take off from a base station (“box”), fly a pre-programmed route and return to the station to download data and get recharged. Aerial insights can also be streamed live. 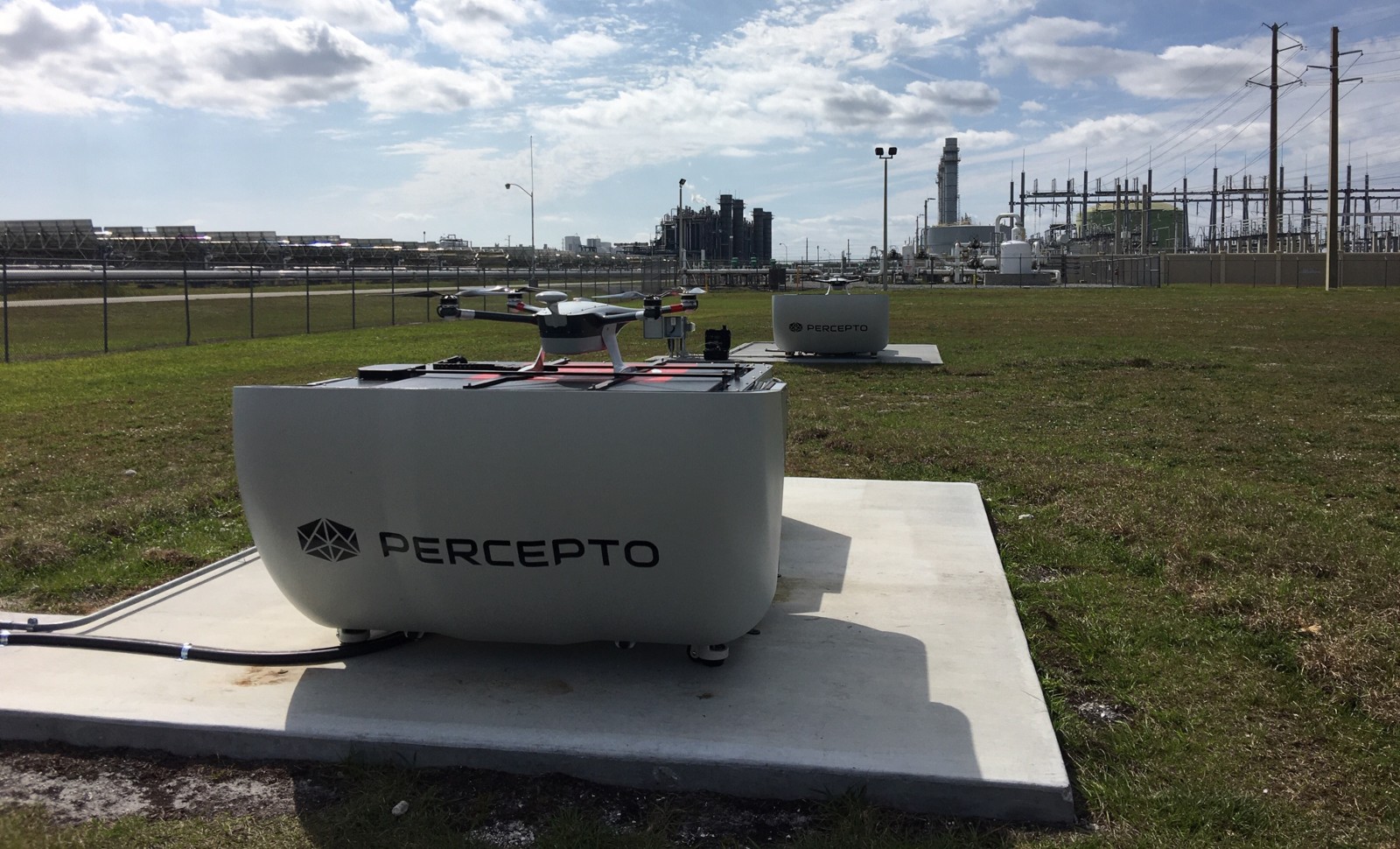 In addition to FPL, Italy’s Enel gas and electricity utility is a client, as are Fortune 500 customers in 10 countries.

Percepto specializes in automating maintenance flyovers for heavy industry – mining, ports and terminals, gas and electric, thermal and solar plants – where regular checks can save millions of dollars. 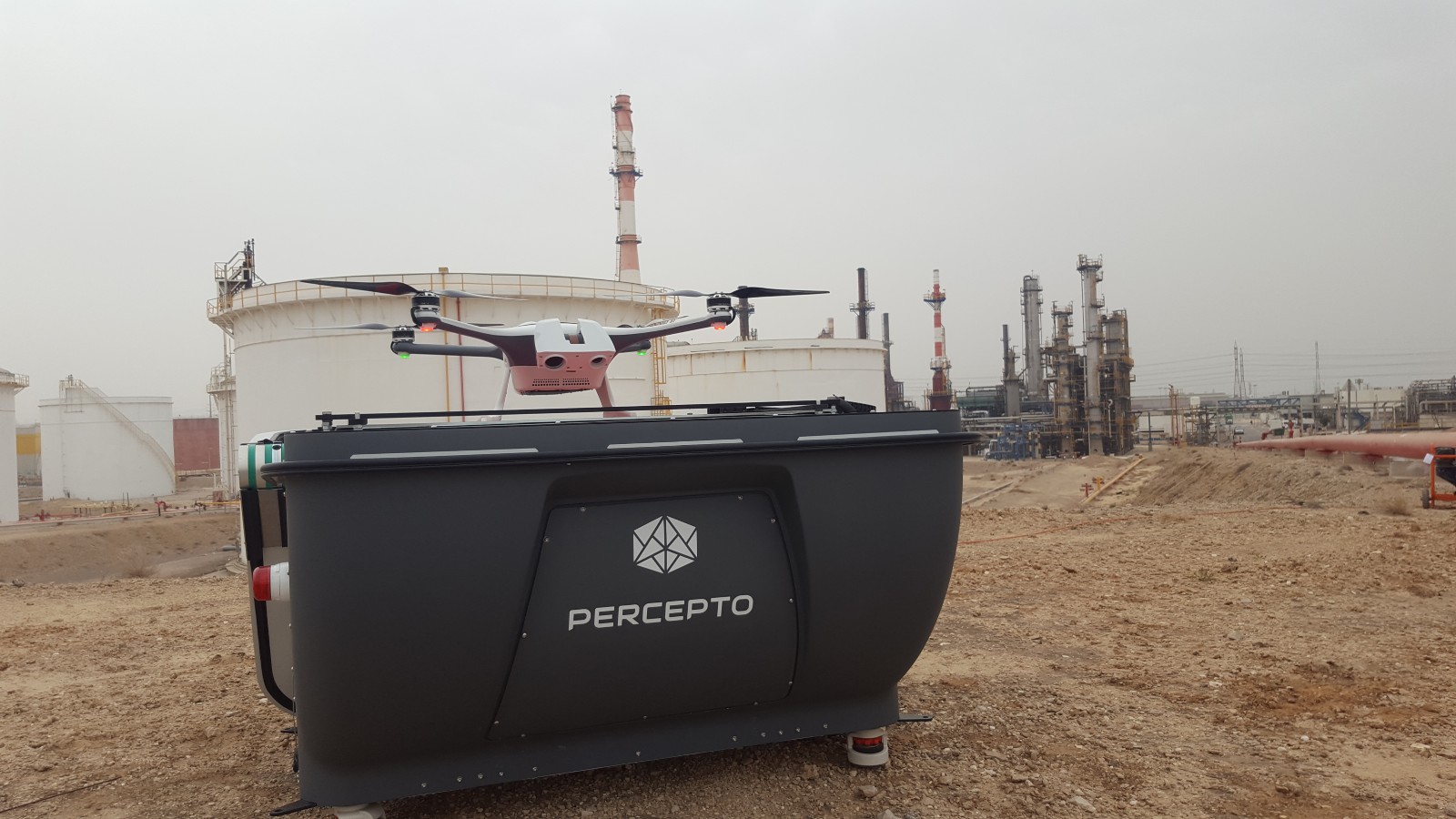 Percepto drone-in-a-box at an oil and gas facility. Photo: courtesy

“Some of these companies can generate up to a million dollars an hour, so preventing downtime has the highest impact on a company’s return-on-investment,” Percepto CEO and cofounder Dor Abuhasira tells ISRAEL21c.

Some 10% of power outages globally are due to hurricanes, according to the World Bank.During Hurricane Dorian in 2019, Florida Power & Light reported $274 million in damages which left 160,000 customers in the dark.

Drones deploy high quality thermal and RGB cameras, along with other sensors that look for fluctuations in temperature, to catch leaks, cracks and other damage fast, so repair teams know where to go as soon as it’s safe.

Percepto started developing the Sparrow in 2013 and has already flown in adverse weather conditions, although the Florida wind tunnel certification is the first time the Sparrow has passed Level 5 hurricane testing – and it’s the first autonomous drone solution to do so.

“It’s given companies a bigger urgency to explore these new types of solutions,” he explains. “They’re experiencing firsthand what happens when they don’t have the ability to get people to work.”

Abuhasira was referring to lockdowns and social distancing, but he could just as easily have been referring to a power plant in the immediate aftermath of an adverse weather event. 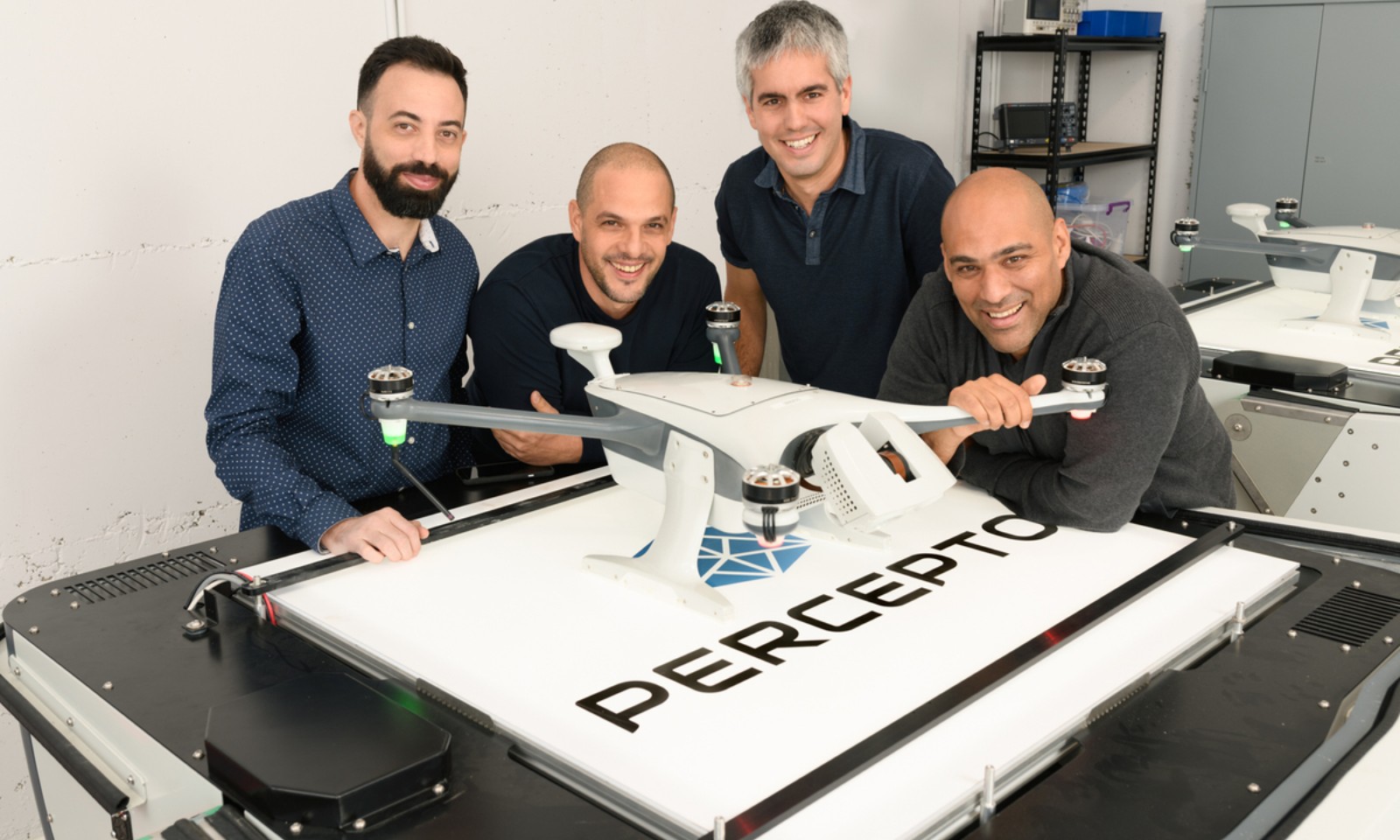 Percepto’s drone-in-a-box system is not just about the hardware.

Artificial intelligence allows Percepto customers to identify “anomalies” in infrastructure in much the same way that software from companies like Ibex Medical Analytics analyzes biopsies from human pathology reports or Zebra Medical Vision helps radiologists spot diseases – by comparing real-time images with a massive stored database in the cloud. 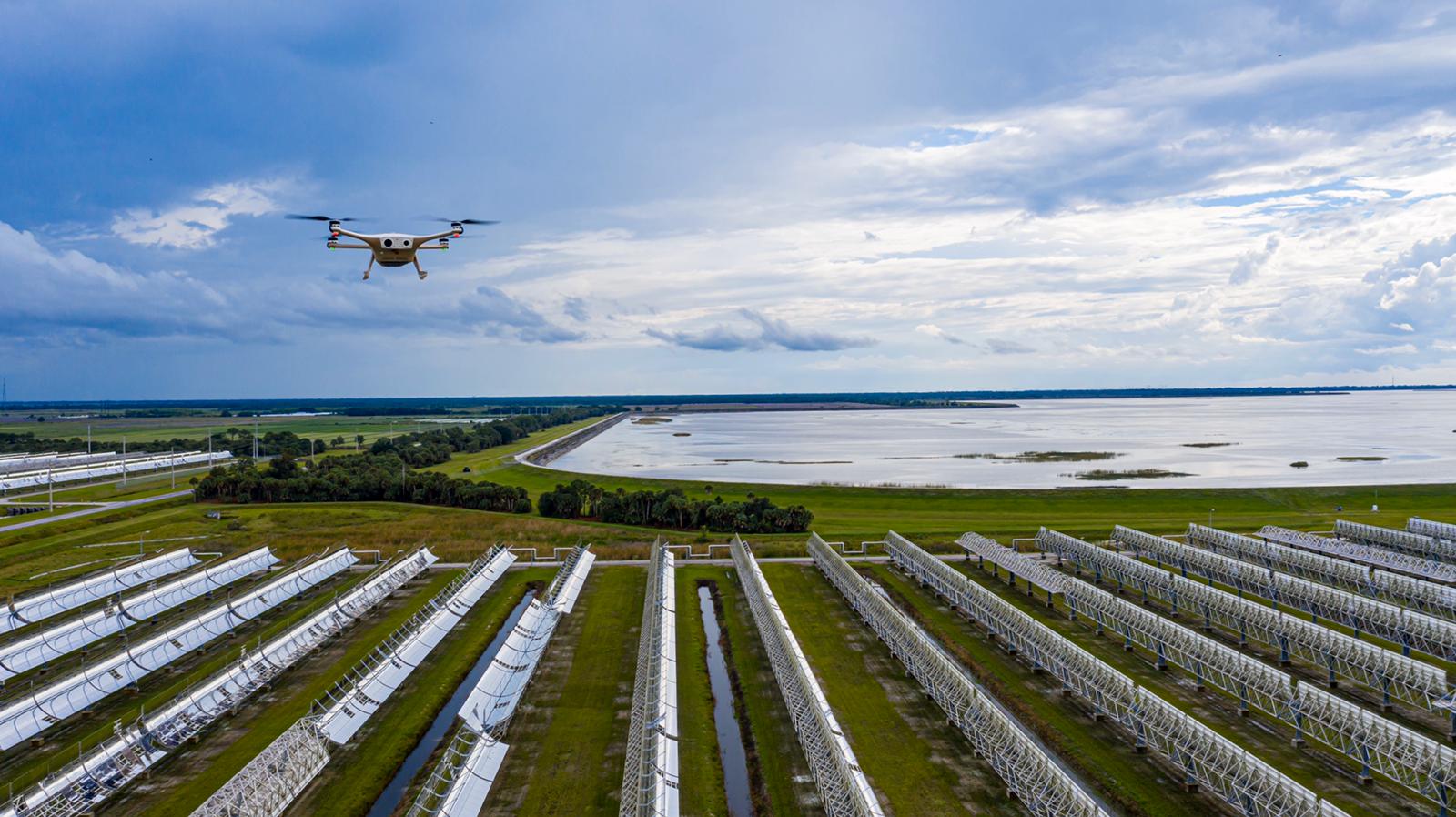 Sparrow drone over a field. Photo courtesy of Percepto

Drones have long been big business in Israel, with at least a dozen companies competing, including Airobotics (probably Percepto’s most direct competitor in the autonomous space), Urban Aeronautics, Flytrex, Edgybees and others.

The military is a clear influence and advantage, Abuhasira says. Israel is the world’s largest exporter of military drones and “within a 30-minute drive from my office there are a number of big defense companies,” he points out.

Indeed, Percepto honed its machine vision and AI technology as a defense industry supplier; the Sparrow is the company’s move into non-military, commercial markets.

The Sparrow has a flying time of about 40 minutes and can hover at a height of 130 feet to avoid power poles. Percepto has “tens of clients” for the Sparrow, says Abuhasira.

Percepto cofounder and chief engineering officer Raviv Raz, a former pilot, and Abuhasira got the drone bug when he took a GoPro digital camera to the Austrian Alps. As he reviewed the footage he’d shot, he thought, wouldn’t it be cool to equip drones with the same kind of visual acuity. Additional cofounders are CTO Sagi Blonder and CCO Ariel Avitan.

While Pecepto was originally looking towards the hobbyist market, the team quickly realized commercial maintenance flyovers were the real business opportunity.

Abuhasira expects interest in autonomous drones to continue, coronavirus or not.

“It’s much more cost effective,” he says, since an autonomous drone can generate a daily or even hourly report without someone needing to walk the site or a manned drone operator needing to pilot the aerial vehicle.

It’s not just the time savings, he adds. It’s also about the reputability of the data – a drone can take the same route and inspect all pipes and towers in the same way each time. For an oil plant with, say, 50 tanks, this means less chance of missing something critical.

He points out that people blamed PG&E, the power utility in California that was forced to declare bankruptcy after the massive 2019 wildfires, for not inspecting their power grid frequently enough. Now, another wildfire season has just begun in California with the Apple Fire in Cherry Valley.

In Florida, the key is “to be able to see our infrastructure in areas which we can’t get to safely [and] to quickly fly over it and understand what our conditions are,” said Michael Dorr, a pilot for FPL’s drone system. “The safety of our crews is paramount.”