Fruit rotting on trees or on the ground costs farmers some $30 billion in sales a year. Fruit picked even two weeks late loses 80 percent of its value.

A major reason for wasted produce: A global shortage of fruit pickers, estimated to grow to five million missing workers by 2050.

Even today, more than 10% of all fruit worldwide cannot be harvested – equivalent to the total annual consumption of fruit in the entire European Union.

What’s a frantic farmer to do?

Well, if you can’t hire workers to pick the fruit, call in the robots.

Israeli startup Tevel Aerobotics Technologies has developed flying autonomous robots (FARs) that take off from a base station, pick only the ripe fruit off the tree and gently lower it for collection.

Because they’re not human, Tevel’s robotic pickers can work 24/7 during the harvest. They never get tired and never need to step out for a coffee or bathroom break.

The robots run on gas and electricity. They’re tethered, so they don’t need to land to be recharged.

Each FAR is equipped with advanced artificial intelligence (AI) that helps it determine whether a particular fruit is ready for picking; the best way to twist and turn the fruit off the branch with its one-meter-long mechanical arm; and whether it has blemishes that make it unmarketable and therefore should be discarded.

“We collect all the information, do data fusion on the video, then run it through our machine-learning algorithms to calculate what is a fruit, what’s the best trajectory to access it, should we pick the fruit by rotating it clockwise or counterclockwise. There are a lot of decisions that need to be taken. And it’s all done autonomously and in real time.”

Tevel’s robots do need some setting up.

“The farmers establish the parameters about what fruits they want to pick, what’s their color grading for [ripeness], what’s the desired weight and size. The robots then follow this,” Maor explains. 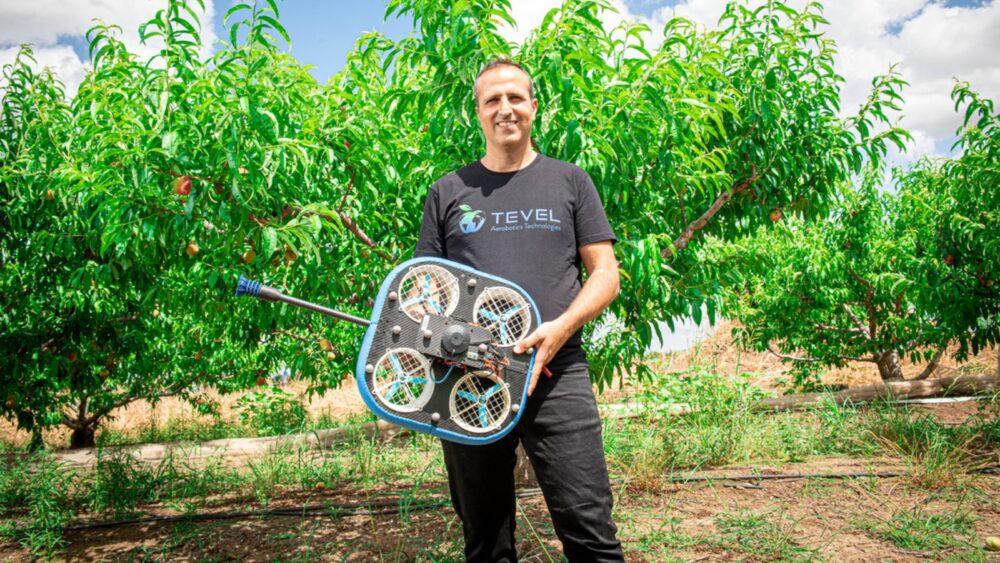 Setup takes one to two hours, with Tevel personnel sticking around for a week to train the farmer how to operate the system. Tevel is also available to work through problems that, ahem, crop up.

In the future, the FARs will be able to prune dead or unnecessary leaves and to spray pesticides.

The robots are controlled via an app on a mobile device, which analyzes the data collected for the farmers.

“You can see the amount of fruit picked, its weight, the effectiveness of any pesticide, were there any diseases,” Maor says.

“Data can let the farmer know if he or she should irrigate more or less. They can see which portions of the orchard are yielding more or less fruit, allowing the farmer to know which areas need to be addressed. Farmers are very hungry for this data. The analytics are invaluable for this business.”

Data also helps to manage the packing house. “Today, distributors don’t know what’s in the boxes. They just know they got it from the picker,” Maor says.

Tevel started with apples, but has since added peaches, nectarines, plums and apricots.

“Every week we add an additional variety of fruit,” Maor notes. “Now we have a whole library of fruits so we can choose in advance, rather than building it each time.”

Yes, avocado is a fruit, despite some troublemakers insisting it’s a vegetable. Which got us wondering: Why not give some equal love to the veggies?

“Fruits are very high-value crops,” Maor explains. “You cultivate them for the whole year, then you have only one production time. So, the value of each piece of fruit is very high. You also need to pick selectively, not all at once.”

All these robotic smarts weren’t easy, inexpensive or quick to bring to market – the system has been in development for some five years and the company has raised around $30 million.

But finally Tevel’s FARs are ready for sale — not direct to farmers but through the vendors who build the collection and transportation systems to get that fruit from farm to table.

Tevel charges a software-as-a-service (SaaS) fee that includes all the costs for the farmer. The price varies depending on how many robots are required.

Maor estimates that a single robot can cover one hectare (2.5 acres) over the course of a harvesting season. A large farm might need 1,000 to 2,000 robots. 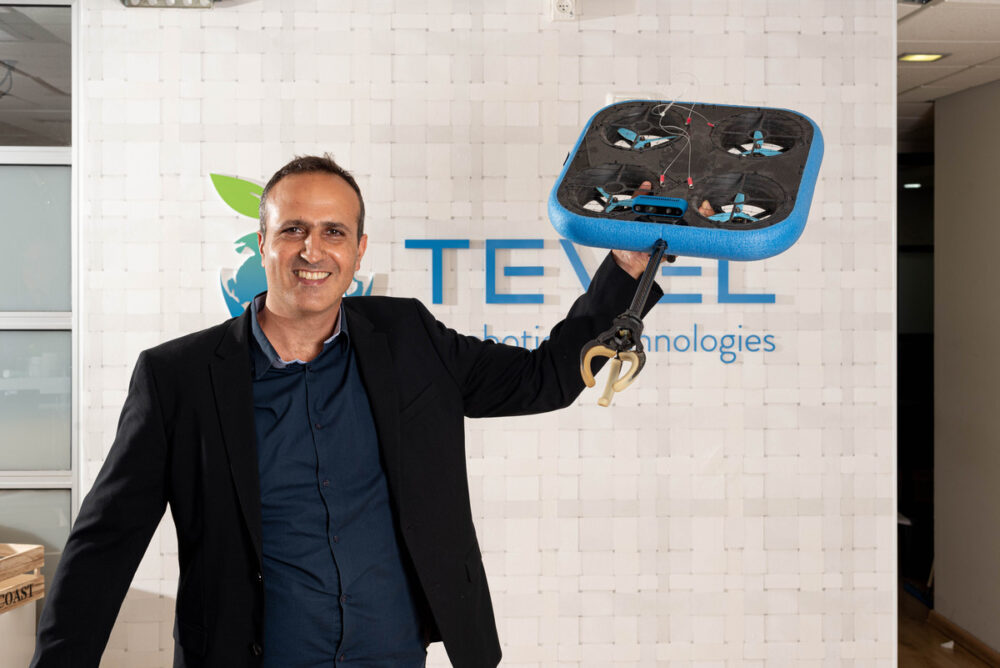 He says Tevel’s tech will save farmers money.

“They won’t need as many people to pick,” he says. “But the main reason is not the savings, but because the people are simply not available.”

In the US, the Mexican workers who made up the bulk of the industry’s pickers have not been returning post-pandemic. Quotas and visa problems have contributed to the dearth. In China, urbanization has rapidly left lots of orchards with no one to work in them.

“Last year we picked in Italy and worked for five weeks continuously,” Maor says. “We had really excellent results. Every night, the farmer took one basket from the human pickers and one from the robot pickers. The robots picked equal to or better than the human pickers.”

“We’re working on speed. Our goal is that one flying robot will pick like a single person.”

One robot per hectare

Tevel has about 20 collaborations in the United States and Europe, including Italy, California and (soon) Washington State.

Staffing count is currently 56 and growing. The company’s chairman of the board is Eyal Desheh, former chairman of Isracard and CFO of Teva Pharmaceuticals and Check Point. Investors include Maverick Ventures and OurCrowd. 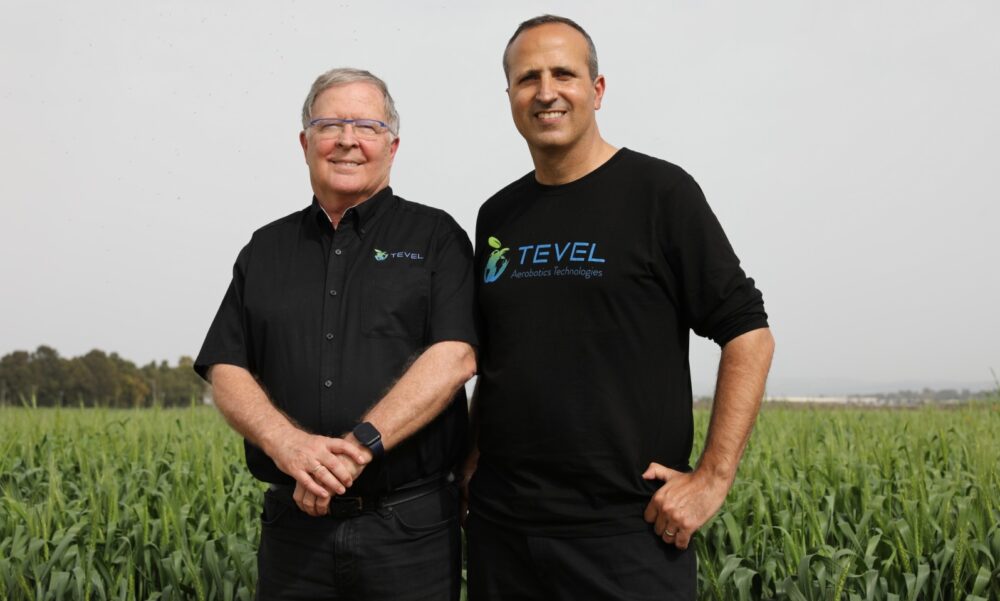 Tevel has competition, but not with flying robots. “The other solutions are all based on ground units with limited movement,” Maor says. “Our robots are small, agile, with excellent mobility.”

Maor isn’t a farmer by trade; he’s a tech executive whose experience is in machine vision and electro-optics for consumer electronics and defense applications.

“Ten years ago, I was watching a TV documentary about the labor crisis in agriculture in Israel. In the documentary, they brought these young healthy 20-year-olds to work the fields. After half a day, all of them left. I was shocked. From a technology perspective, I saw that this is a big problem that needs a big solution.”