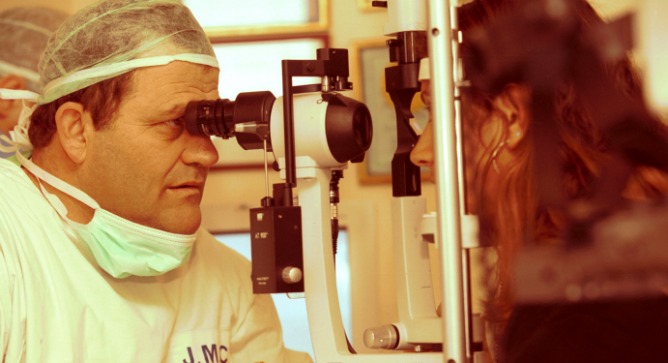 Israel serves as a model for other countries in preventing blindness. Photo by Nati Shohat/Flash90

A new study published in the American Journal of Ophthalmology shows that rates of preventable blindness in Israel have been cut by more than half over the last decade, from 33.8 cases of blindness per 100,000 residents in 1999 to 14.8 in 2010.

Other countries could see similar results by emulating Israel’s approach, suggests Belkin, one of the foremost ophthalmology researchers in Israel.

The secret of Israel’s success? Developing innovative methods of prevention and treatment and making them available universally through the national medical system.

Community-based programs, such as dedicated diabetes clinics, promote early prevention and timely treatment for diabetes-related complications that can lead to blindness. Diabetes clinics in Israel pay for themselves in about two years’, he says, factoring in their impact on preventing greater health concerns. It is much more expensive to treat blindness as it develops rather than preventing it from the start, Belkin points out.

According to the World Health Organization, blindness remains a severe health concern even in industrialized countries, yet 80 percent of blindness is preventable or treatable.

The surprising results of the study were revealed when Belkin was researching a broader topic.

“I was trying to show that over the last 100 years there was no change in the rate of blindness from glaucoma in the world, which is probably true in many places,” Belkin tells ISRAEL21c.

But when he and fellow researchers Alon Skaat, Angela Chetrit and Ofra Kalter-Leibovici looked specifically at Israeli statistics over the last 12 years, they discovered that although rates of untreatable genetic causes of blindness remained steady over that time period, rates of preventable blindness were reduced by more than 56%. This was not true of any other country.

“There is nothing anywhere else remotely like we have here in Israel,” he says.

In fact, in the same issue of the American Journal of Ophthalmology was a report from Denmark — which also has socialized medicine and high standards of care – showing a decline only in age-related macular degeneration.

Belkin speculates that one of the key differences could be that Israelis tend to adhere to recommended treatment regimens more closely than patients in other countries. This phenomenon has been shown in relation to other diseases but hasn’t yet been proven in ophthalmology.

The doctor notes that policy also plays a role. Since the 1990s, Israeli patients have been able to choose their doctors privately for cataract surgery. This practically eliminates wait times for surgery and prevents the condition from growing worse over the long term.