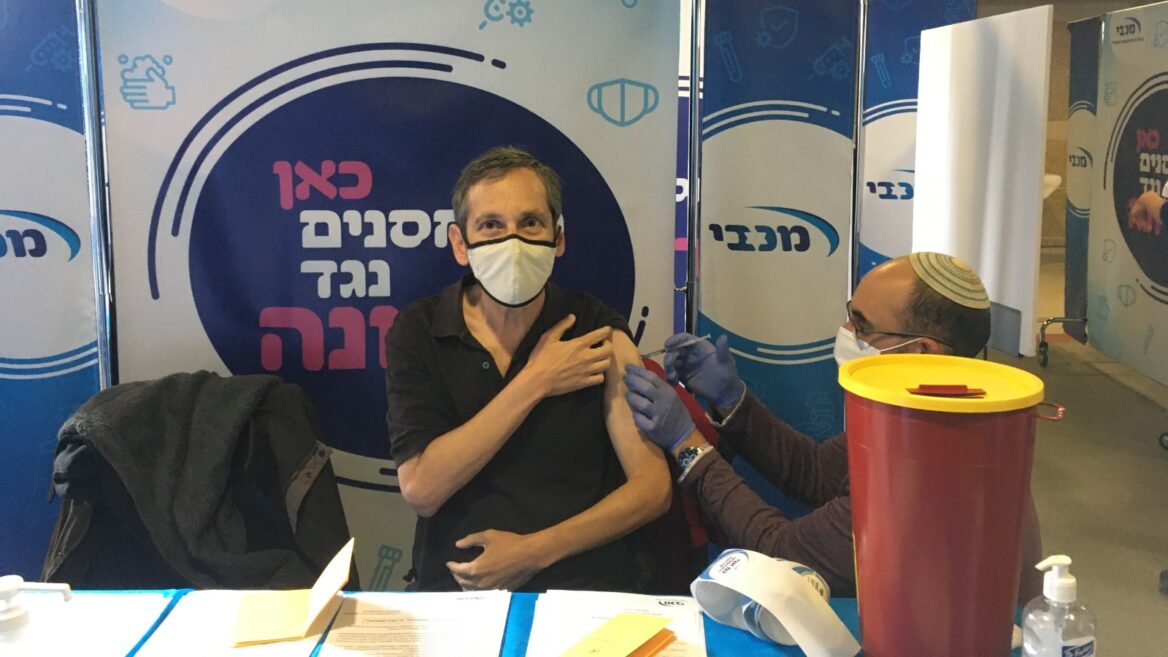 Brian Blum getting his first booster shot in Jerusalem. Photo by Jody Blum

When Israel began offering a third dose of the Pfizer Covid-19 vaccine last summer, I was one of the first in the country to get it.

That made sense – I suffer from an incurable blood cancer that puts me into one of those immunocompromised groups you’re always reading about. My immune system is not necessarily robust enough to generate sufficient antibodies to fight off the virus.

The logic at the Ministry of Health is that more boosters can make up the difference. It worked with three, so why not four?

But when Israel announced that at risk people like me and those over 60 (also me) were eligible to get a second booster (that is, the fourth shot in less than a year), I was ambivalent.

The preliminary data seems clear – a fivefold increase in antibodies according to research at Sheba Medical Center (although it is still too early to know whether the number of antibodies maintains over time).

And yet, like so many others around the world, I am suffering from vaccine fatigue. Questions abound.

And yet, with worst-case projections of Covid reaching 50,000 to 100,000 infections a day in Israel, and an estimate that between 2-4 million Israelis will catch Covid during this wave, maybe now is not the time to take any chances.

The current surge has led epidemiologists to change their tune: The seemingly milder Omicron variant may be what pushes Covid to become endemic, which means that, like with the common cold, everyone is going to catch Covid at some point, perhaps every year.

Maybe we should just get it over with.

Even so, it seemed prudent to do whatever I could to provide extra protection, even if it’s “just” to stay out of the hospital. Moreover, immunocompromised people like me serve as “incubators” for new variants. I certainly don’t want to contribute to more global misery.

It was with all that in mind that I called Maccabi, my HMO, to schedule an appointment. 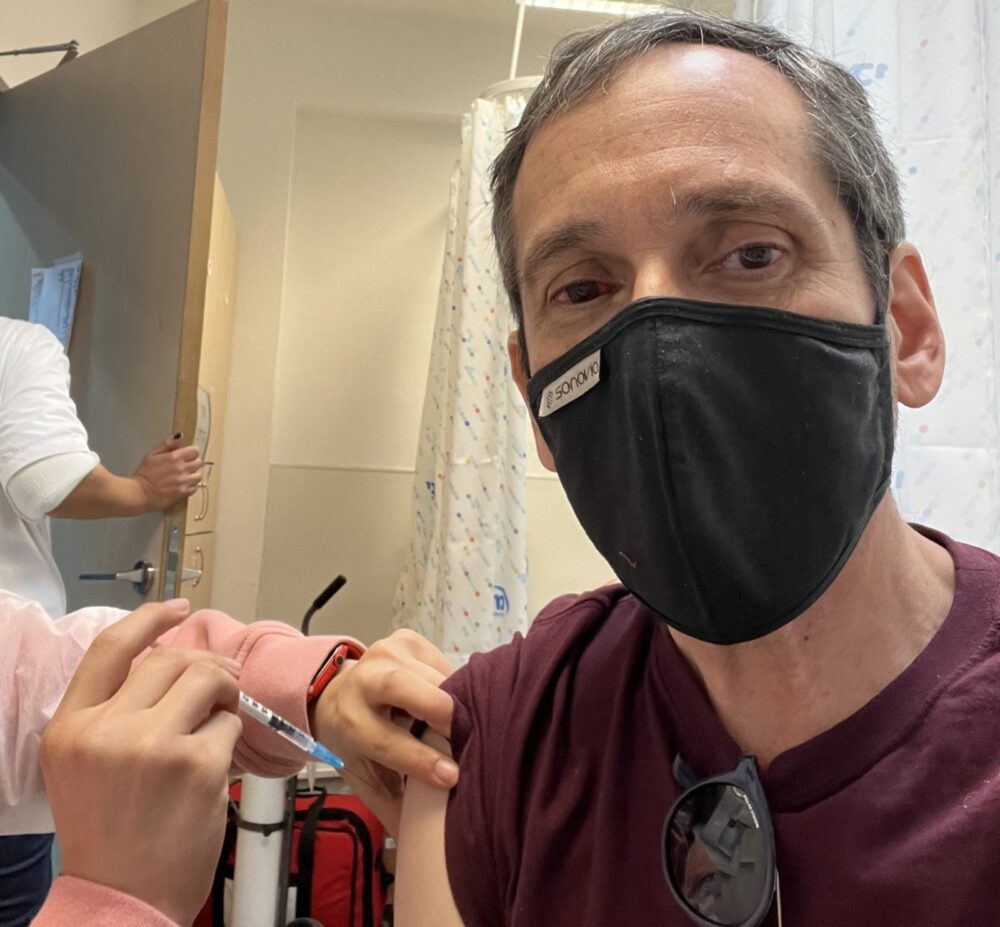 Brian Blum took this booster selfie when he got his fourth Pfizer dose.

“We have openings today, tomorrow; when would you like?” the representative asked.

I chose the next day.

For doses one and two, my wife, Jody, and I dutifully filed into Jerusalem’s cavernous Pais Arena where hundreds of other Israelis were gathered. We waited about 30 minutes for our number to be called and then another 15 minutes to make sure there were no side effects.

This time around, I visited one of Maccabi’s smaller neighborhood clinics. There were plenty of technicians and helpful attendants directing me where to go. It took less than two minutes from the time I arrived until I had the shot in my arm.

The jab didn’t hurt, but my arm throbbed for the next 48 hours and I had mild flu-like symptoms (aches and pains, headache, a touch of nausea).

Since I received my shot, my adult children have asked if they should get a fourth shot if and when it’s offered for their age groups.

For me, the argument was clear. But for healthy triple-jabbed 20-somethings, maybe they’ve got enough protection.

According to Dr. Dror Mevorach, head of the coronavirus ward at Hadassah Medical Center in Ein Kerem, nearly 100% of the severe, hospitalized Omicron cases at his hospital are either unvaccinated or did not receive a third dose.

For my daughter, Merav, who’s a new mother,  however, I would counsel the opposite. Two-month-old Ilai Ze’ev has no natural immunity to Covid and he’s too young for a shot. But he will receive any protection his mother receives while he’s nursing.

Will I do anything differently now that I’m quad-vaxxed? Probably not. I’ll still wear my mask indoors. I’ll avoid crowded gatherings, concerts, clubs, indoor synagogues and weddings until we know more. If the Omicron surge hasn’t subsided by March, I’ll probably cancel that US vacation we have planned.

If I do catch Covid, despite all the precautions, I’ll try to receive Paxlovid, Pfizer’s new antiviral pill that cuts the risk of hospitalization by 90% in at-risk populations. Just because Covid may become endemic doesn’t mean it will be innocuous. Other endemic diseases are not. Israel received its first batch of tens of thousands of Paxlovid pills two weeks ago.

Israel was the first country in the world to authorize a third dose and it’s doing it again with the fourth. Pioneering is central to this country’s DNA. I don’t mind being a guinea pig if it means keeping myself and my loved ones safe.

I fully expect to have to get another vaccination at some point in 2022 and I will do so gladly. Perhaps Pfizer will have rejiggered its formula by then to provide more protection against infection. Or maybe the Israeli-made BriLife vaccine will confer longer-lasting immunity against Omicron and variants yet to emerge.

In the meantime, if you’ll excuse me, I need to stop typing now and nurse my throbbing arm.

UNCOVER ISRAEL - Get the ISRAEL21c
Weekly Edition free by email
Sign Up Now!
Bring Israel's story to life.
Millions of people around the world rely on us to gain a deeper understanding of Israel. We are the trusted source for original content you won't find anywhere else.
You can make a difference. Donate today to support journalism that brings Israel’s story alive.
SUPPORT ISRAEL21c
Read more on:   Tales from the heart, Health, Covid-19 vaccine, Living