This summer’s sweltering heatwave across Europe is sparking wildfires, damaging infrastructure, polluting the air and making life miserable for millions. There are health problems and even deaths attributed to the severe heat.

According to one data scientist, in Tel Aviv alone the highest average annual number of days when temperatures exceeded 30 degrees Celsius (85°F) went up from 22 days between 1964 and 1971 to about 90 days between 2016 and 2019.

Simply cranking up the A/C just makes things worse: The overuse of fossil-fuel-generated electricity is the main contributor to excessive “greenhouse gas” emissions, particularly carbon dioxide, that trap too much of the sun’s heat in the atmosphere. 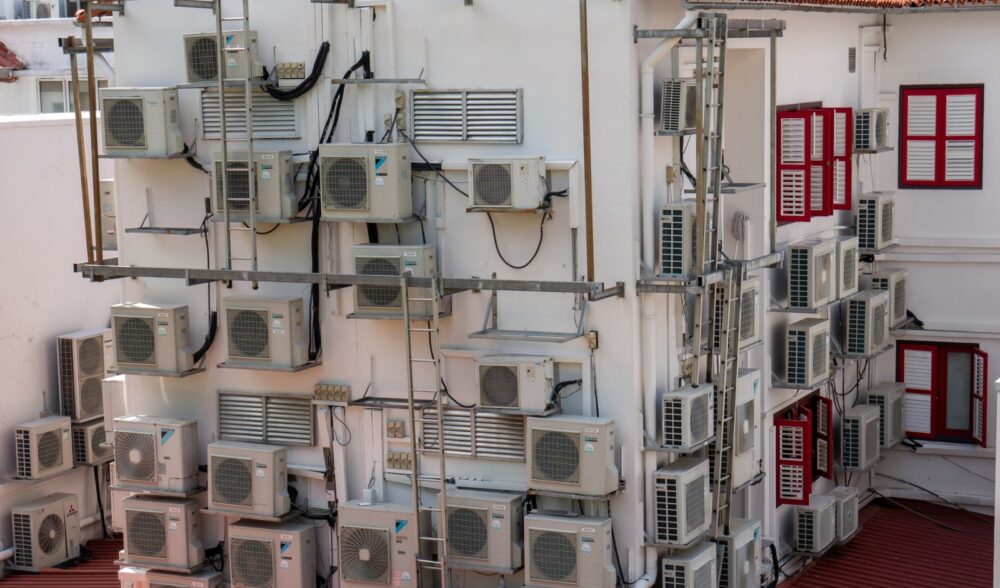 Air conditioners on a building in Singapore, where it’s always hot and humid. Photo by Alexandre Lecocq on Unsplash

The most intensively energy-consuming countries – such as the United States, China, India, and Russia – must take responsibility for drastically reducing greenhouse gas emissions, experts agree. 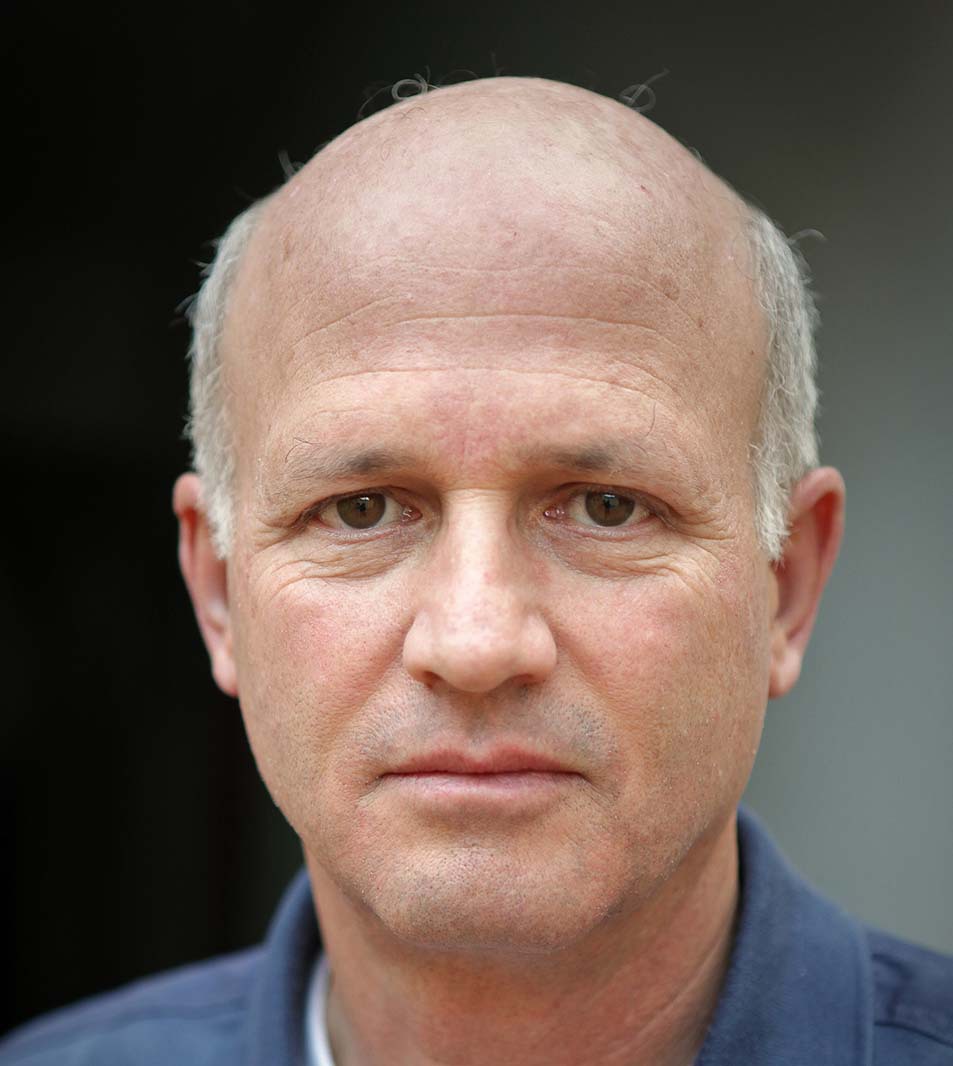 However, we all can do our part to mitigate and adapt to this searing reality, says Prof. Evyatar Erell of Ben-Gurion University’s Department of Geography and Environmental Development.

“Mitigation” refers to actions individuals and groups can take to reduce the causes of climate change.

Mitigation should include reducing electricity use, driving less (transportation causes 27% of greenhouse gas emissions, according to the US Environmental Protection Agency), eating fewer animal products and slowing deforestation.

Keeping cool in the city

“Over 50% of people worldwide live in cities, and that’s where we consume the most energy,” Erell tells ISRAEL21c.

If cities are densely built with short blocks and lots of intersections, residents don’t need a car to do shopping and errands. Shading options to keep these short walks comfortable in all-weather include roofed arcades; fabric canopies or pergolas; and planting trees, although tree roots can get tangled with infrastructure under the pavement. 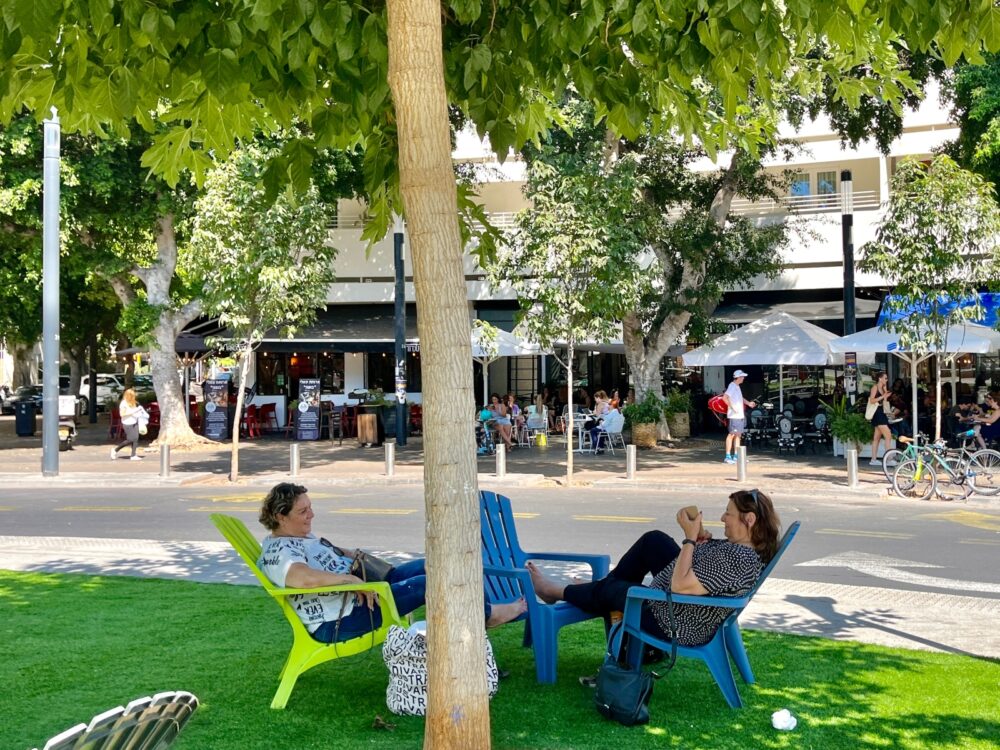 However, there’s a paradox: A dense city with narrower streets is more conducive to walking, but also forms a “heat island” manifested primarily as hotter nights.

“City streets cool more slowly in the evening than in open countryside because ground surfaces and building facades don’t ‘see’ the sky. On summer nights, the minimum temperature can be as high as 26 to 27 degrees Celsius [79-81F] in Tel Aviv,” says Erell.

“I recall visiting my grandmother in Tel Aviv during stifling hot nights, and she’d just open the window for a breeze. But as you densify more there won’t be a cool breeze. That’s enough to make you turn on the air conditioning every night.”

Erell says windows and roofs are the key to a building functioning well in hot, humid conditions. Windows should have shades or shutters and face in the direction of nighttime breezes. Roofs should be painted white and outfitted with solar panels to generate clean electricity.

Click here to read ISRAEL21c’s rundown on LumiWeave and other technologies to keep cities cool.

Adapting how we live

As for adapting behaviors and lifestyles, it varies by socioeconomics and geography.

Erell’s ongoing studies of Israeli homeowner habits reveal that educated people, who presumably understand climate change better than those less educated, actually use more electricity because they can afford energy-consuming luxuries that fit a high-income lifestyle.

Citizens of normally cooler places, such as London, will have a bigger adaptation curve than in, say, Singapore where every single day is hot and humid, or Israel where summer heat has always been intense.

“We [in Israel] will face an increase, on average, of about 2 degrees and heatwaves will become correspondingly a bit longer and warmer. That’s what we have to adapt to,” says Erell. 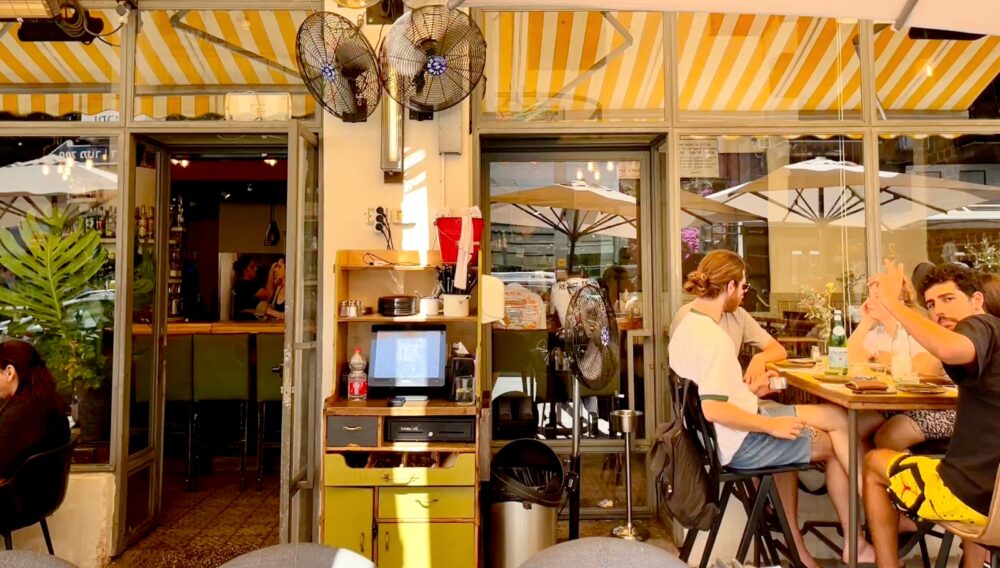 Patrons of a Tel Aviv café in July are cooled by awnings and fans. Photo by Samantha Baron

“In the UK, they’re experiencing 38, 40 degrees this summer, which happens in many places in the world all the time, but people are acclimatized so they aren’t dropping like flies. It’s a matter of adaptation.”

Indeed, said Prof. Victor Novack, director of the Research and Development Authority at the BGU-affiliated Soroka University Medical Center in Beersheva, heatwaves in countries where people aren’t prepared for extreme heat are much more likely to cause deaths than in countries already adapted to high temps.

The Israeli government has several initiatives to gather climate research and make it widely accessible.

The Ministry of Environmental Protection founded the Israel Climate Change Information Center in March 2011 in collaboration with three universities as an information depository for the scientific community and the public.

The Meteorological Service of the Transportation Ministry is now establishing a climate calculation center. This database of predicted regional impacts of climate change is intended for researchers and decisionmakers in agriculture, energy, transport, water, wildlife and security.

“Deforestation is about 10% of the reason the planet has less absorbing ability of CO2 emissions from fossil-fuel burning,” he says.

This is because forests capture carbon that otherwise goes into the atmosphere. With fewer trees, the air and oceans get warmer, and the risk of forest fires, droughts and floods increases. 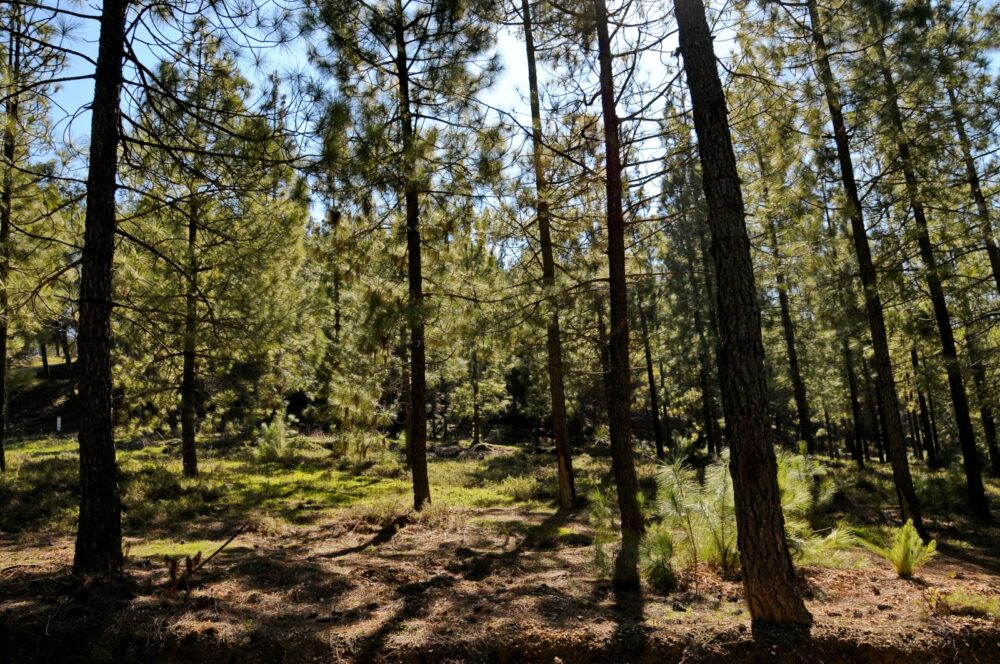 Biriya National Forest in the Galilee. Photo by Avi Hirshfield/KKL-JNF

“The concentration of CO2 and other greenhouse gases increases all the time and has reached a peak of 420 parts per million, while 60 years ago it was 320 ppm,” Markel tells ISRAEL21c.

“Scientists said this 10 years ago, but nobody listened. Now, after terrible heatwaves in Canada last summer and in western Europe this summer, they’re listening,” says Markel. 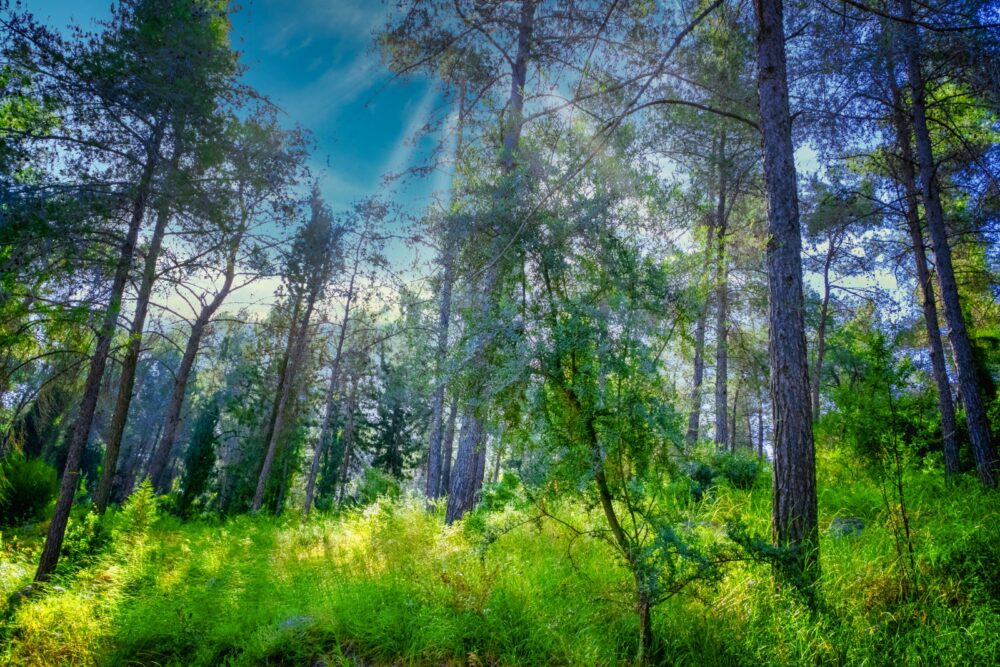 “It will take time to shift to renewable energy, but for now at least we can stop the deforestation — that was one of the decisions made in Glasgow” at the UN Climate Change Conference last October, he says.

“At KKL-JNF, we fight to reclaim damaged or burned forests and plant more forests as a main tool for carbon capture and sequestration.”

“These environments capture carbon in even a higher rate than the forests, and they suffer the most from climate change because the heat and droughts dry them out. So another mission of ours is to rehabilitate streams and aquatic environments,” Markel says.

KKL-JNF’s new Climate Crisis Center (not a building but a program) is creating knowledge to support research and development regarding climate mitigation and adaptation.

The center is working with regional authorities in sparsely populated areas to produce renewable energy for the main consumption areas of Israel. Rather than appropriating huge tracts of unused land for solar farms, they will install solar panels and windmills on water reservoirs and farms to get double duty, and income, from land already in use. 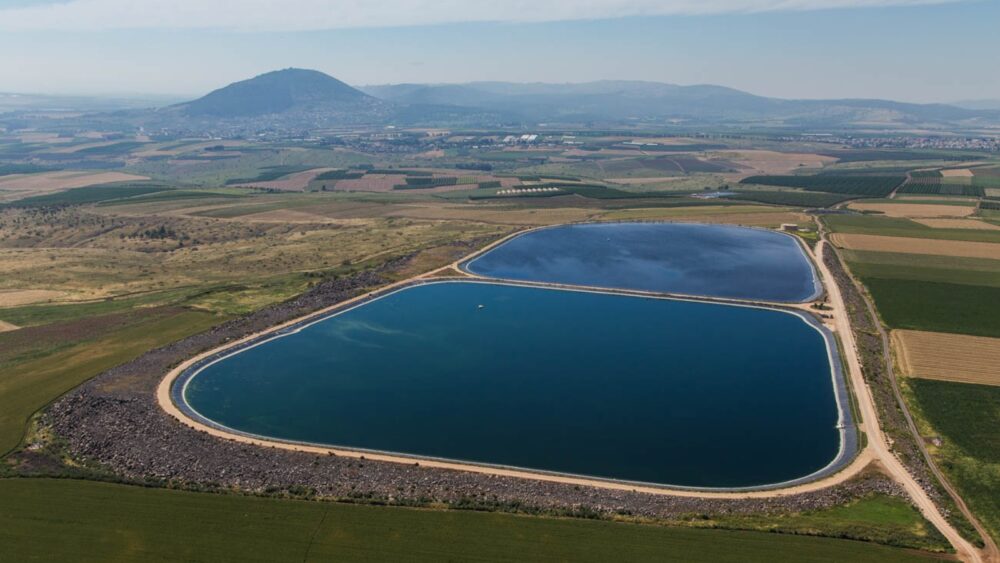 Reservoirs like this can be covered with solar panels. Photo courtesy of KKL-JNF

“Our first agrivoltaic project, with Maaleh Gilboa Renewable Energy in the north, will be in a vineyard. Then we’ll try mango and lychee orchards,” says Markel. “The farmers will be able to sell their yield as well as electricity.”

In the south, KKL-JNF is working with Eilat Eilot Renewable Energy to research and develop renewable energy-storage solutions –hydrogen, air pressure, liquid salt and mineral cements, for example – to supply the nighttime needs of institutions such as hospitals.

“Today the main [storage] technology is lithium-ion batteries, but they contaminate the environment at the end of their life, so we are seeking another technology to collect and store the heat,” says Markel.

In cooperation with KKL-JNF, the InNegev incubator,  Enel Green Power and the European nation of Andorra, the PLANETech arm of the nonprofit Israel Innovation Institute is sponsoring an Extreme Weather Events Competition to identify and fund practical solutions for climate-change impacts on human health, forests and the economy.

“In 2021, the top 10 extreme weather events cost $170 billion. This a huge challenge and opportunity. But right now, less than 1% of global funding is going into [extreme weather solutions], and the number of startups is pretty low.”

Although the contest is open to both Israeli and foreign entrepreneurs, Klar points out that Israelis “are very good with emergency response and with remote sensing and satellite technology that we can leverage to address extreme weather and adaptation to climate change.”

“Weather events are becoming more frequent and more volatile in any given area. We’ll have more wildfires on the West Coast, more flood events on the East Coast, more hurricanes in hurricane season. What we’re trying to do is help countries and businesses put systems in place to adapt to that,” says Tomorrow.io CEO and cofounder Shimon Elkabetz in the video below.

“If Tomorrow.io can do it, others can,” says Klar. “This is one of the most exciting areas for Israel to take leadership. This situation is not going away – it’s not like the metaverse or NFTs, which may be a trend. It’s life.”