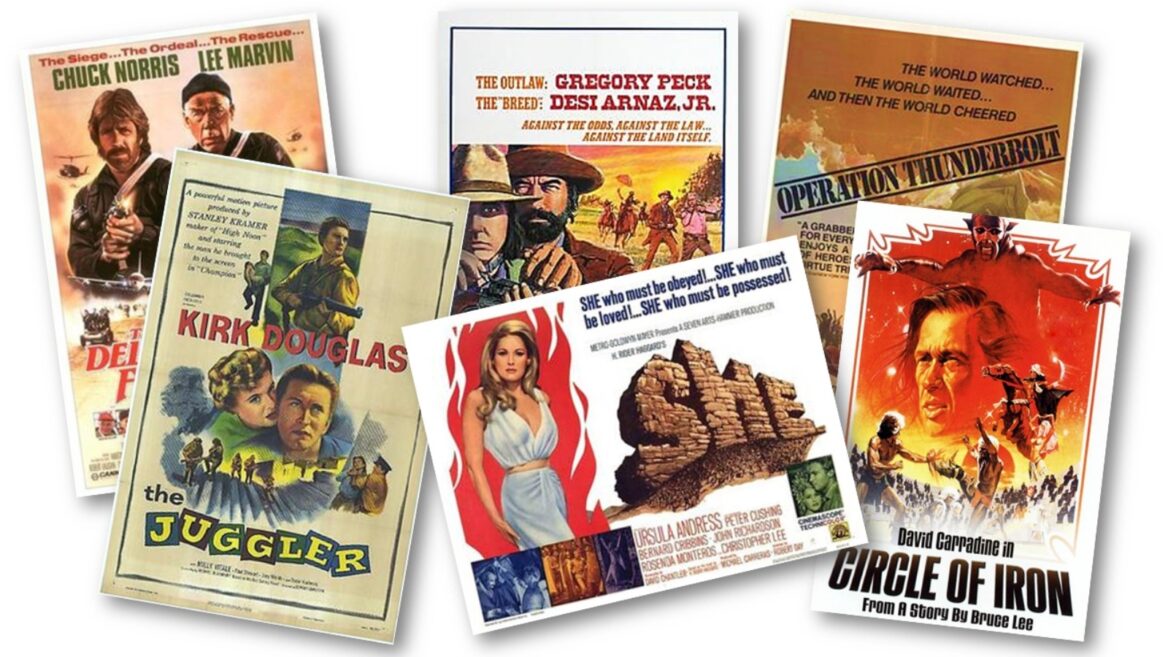 The death of Kirk Douglas at age 103 was reported in Israel as it was around the world, recognizing the actor’s many achievements, pride in Jewish heritage, and defining role in the epic film “Spartacus.”

What many Israelis may not have known: In 1953, Douglas starred in “The Juggler,” the first feature to be filmed in the new State of Israel.

This was the first of many times Israel would be used as a location for major motion pictures about the young state’s history. Among these films are “Exodus“ with Paul Newman (1960), “Judith” with Sophia Loren (1966) and “Cast a Giant Shadow,” also with Douglas (1966).

However, many of the other foreign productions shot in Israel would be low budget, falling under the category known as “schlock.”

The first to take advantage of Israel as a discount film location was 1960’s Italian-made “David and Goliath.”

Inspired by big-budget Hollywood biblical epics like “Spartacus,” “Samson and Delilah” and “The Ten Commandments,”the low-budget “sword and sandal” genre dominated the Italian film industry in the late Fifties and early Sixties.

1961 marked another first with the British-Israeli “swords and sandals” co-production “A Story of David.”

This dramatization about King David and King Saul is said to be among the first “made for TV” movies. It starred Jeff Chandler – bornIra Grossel of Brooklyn, New York — best known for playing Cochise in the Western movie “Broken Arrow.” Having risen from the waves before a fascinated James Bond in “Dr. No,” Ursula Andress landed the iconic role of Ayesha- – “She-Who-Must-Be-Obeyed”– in the 1965 movie “She,” which was filmed in part in the Negev Desert.

Starting in the 1960s, Israel began pursuing co-productions in earnest, marketing itself as an ideal low-cost filming location as an alternative to southern Italy, home of the spaghetti Western. 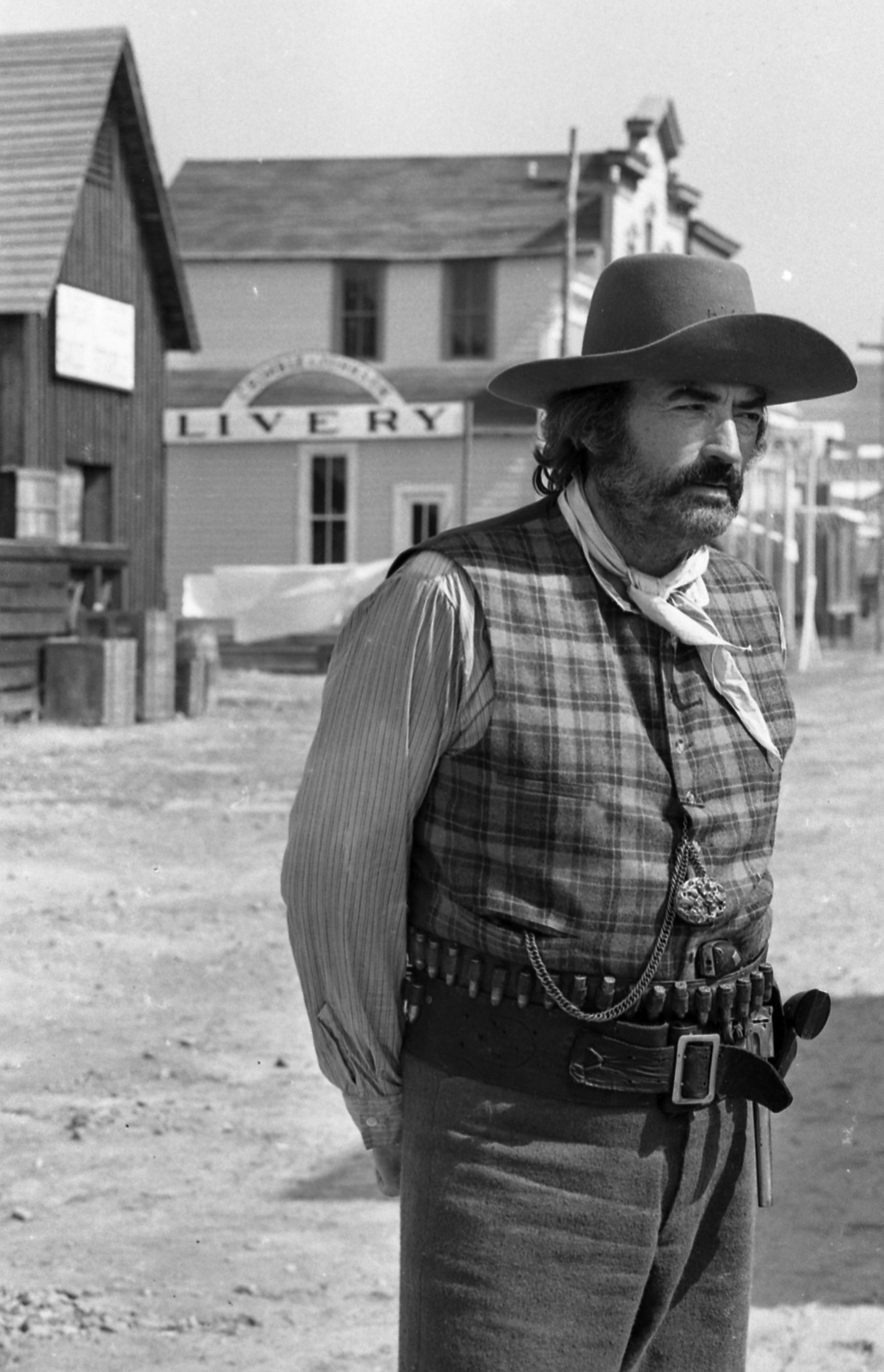 The advantages cited were the sunny weather, professional multilingual crews and services, and varied locations — from ancient to modern, barren desert to snow-capped mountains — all conveniently located in a compact little country.

An entire Wild West movie lot was built in the Negev Desert – a perfect setting for the first “oat-ers” to be filmed in Israel. The 1970 Western “Madron,” starring Richard Boone and Leslie Caron, was the first feature shot in Israel set in a non-Israeli location. This was followed by another Western, “Billy Two Hats,” which starred Gregory Peck and Desi Arnaz Jr.

The future of foreign filmmaking in Israel was placed in jeopardy in the summer of 1973, prior to the release of the movie version of musical“Jesus Christ: Superstar.” The rock opera was denounced as anti‐Semitic by major US Jewish organizations, causing the Israeli government to disassociate itself from the production.

As reported by The New York Times, “In the opinion of industry specialists, the future of foreign filmmaking in Israel rides on the outcome of the debate. Foreign film productions brought in $4million in foreign currency here last year and are expected to bring five times that much by 1976.” Adjusted for inflation, the sums equal $24.2m and in $121m, respectively, in 2020 terms.

While the local Israeli film industry began to flourish in the 1970s, the Arab boycott of Israel, occasioned by the 1973 OPEC-instigated oil crisis, put a damper on big-budget foreign movie productions.

This coincided — or perhaps led to –what can only be called a wave of schlock that dovetailed nicely with the rise of Cannon Films, a company founded by cousins Menahem Golan and Yoram Globus.

Golan had worked as an assistant at the studios of Hollywood’s “B-Movie King” Roger Corman, then returned to Israel as a director and producer of “Burekas” films – the slang term for popular locally produced ethnic melodramas and comedies. Over time, the names Golan, Globus and Cannon Films would become – at first jeeringly and then fondly – synonymous with schlock.

In 1977, Golan and Globus released “Operation Thunderbolt,” a serious dramatization of the 1976 terrorist hijacking and the rescue of Israeli hostages at Entebbe during which Col. Yonatan Netanyahu was killed. Golan’s 1986 film, “The Delta Force,” informed by the real-life hijacking of TWA Flight 847, was a heightened version of “Operation Thunderbolt” and the first in a three-part action series produced by Cannon Films starring Chuck Norris.

Cannon developed a model for low-budget film production that enabled creators willing to work for next to nothing just to realize their visions on the silver screen: actors wishing to act against typecasting, older actors who had lost box office appeal, directors with pet projects rejected by major studios, first-time producers with a script and a star attached, and other Tinseltown misfits.

Cannon sold films in bundles, meaning the distributer of a Sylvester Stallone vehicle was also committed to screen a high-art opera like Franco Zeffirelli’s “Otello.” In another cost-saving measure, in the mid-1980s, construction commenced on a Golan-Globus film studio in Neve Ilan near Jerusalem, with the intention of using all of Israel as a movie backdrop.

“Circle of Iron,” project helmed by legendary martial-arts master and film star Bruce Lee, had stalled with Lee’s sudden death in 1973. A few years later, the project was revived, recast with David Carradine (of the TV show “Kung Fu”) and filmed in Israel.

Despite questionable production values, the film (also known as “The Silent Flute”) has been praised by fans for providing insight into Lee’s philosophy of martial arts.

Harking back to schlock classics like “She” was “America 3000,” a post-apocalyptic science-fiction movie set in a futuristic third millennium Colorado but actually shot in the Negev Desert in 1986.

Notable among the“Israel as cut-rate exotic locale for your action film” genre: “Ashanti” (1979) with Beverly Johnson and Michael Caine, “Sahara” (1983) with Brooke Shields, “The Ambassador” (1984) with Robert Mitchum and Rock Hudson; and “Rambo III” with Sylvester Stallone (1988). 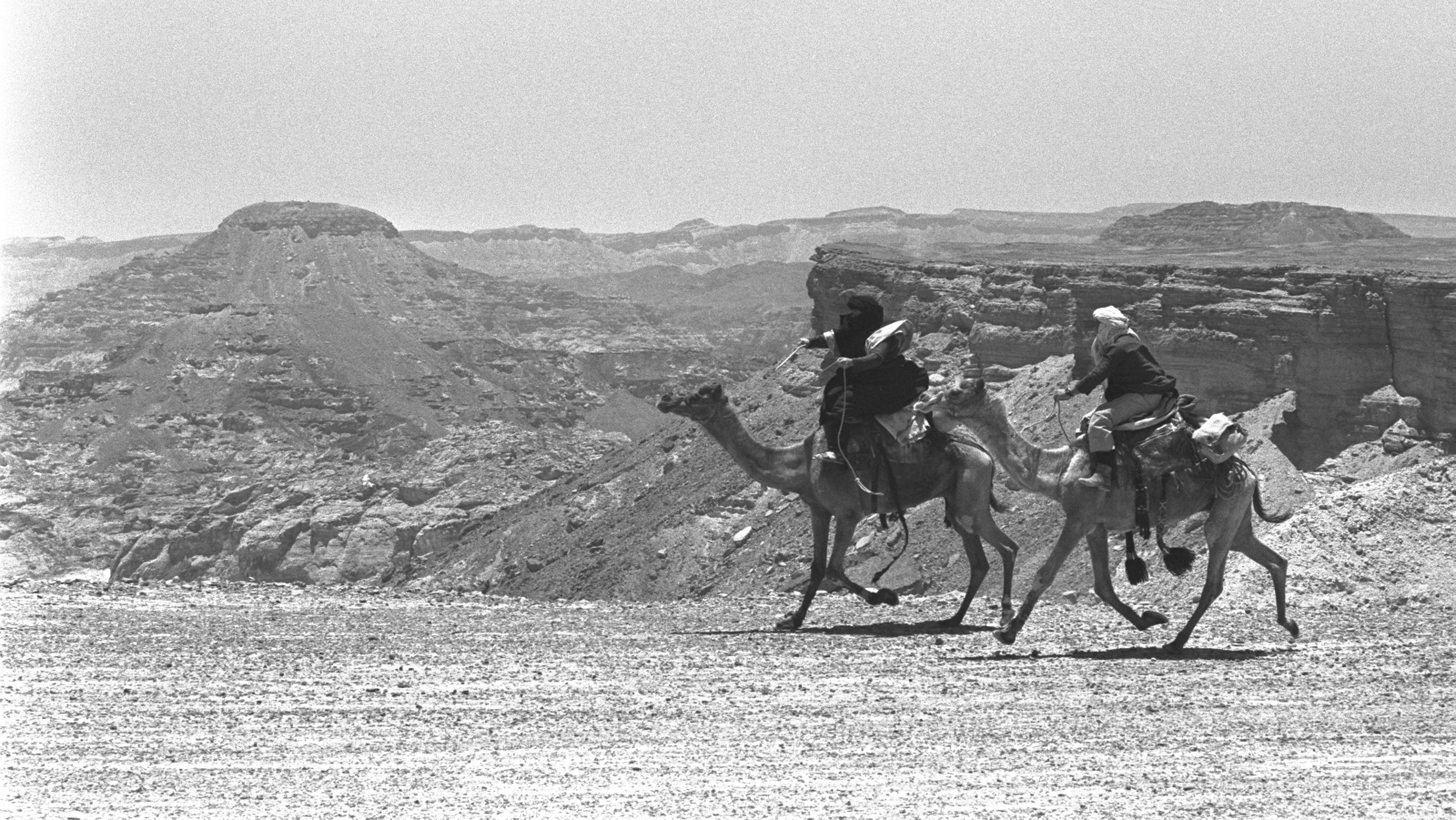 Extras ride camels on the set of “Ashanti” with Beverly Johnson and Michael Caine, shot in the Negev near Eilat. Photo courtesy of GPO

As opposed to standing in for another location as in the previous decade, Israel began being presented as itself in films like 1995’s “Deadly Outbreak,” starring Kenpo master and stuntman Jeff Speakman. The movie, a sort of “Die Hard in an Israeli biochemical weapons plant,” went direct-to-video and has, by now, achieved a cult following among fans of Speakman. Incidentally, his 1993 movie “Street Knight” was the last produced by Cannon Films.

There have, of course, been quality foreign films shot in Israel. But the model forged by Golan and Globus looms large, long after the demise of the Cannon Group in 1994.

Another of their stars, Jean-Claude van Damme, undoubtedly took a page from the Cannon canon in 2001 with “The Order,” a direct-to-video production featuring a scene with van Damme in Hassidic garb running from Israeli policemen in the Old City of Jerusalem. It’s a one-of-a-kind sequence and, like all B-movies, it may not be classy but it sure is fun to watch.

Here is the full playlist of Cannon movie trailers on YouTube.